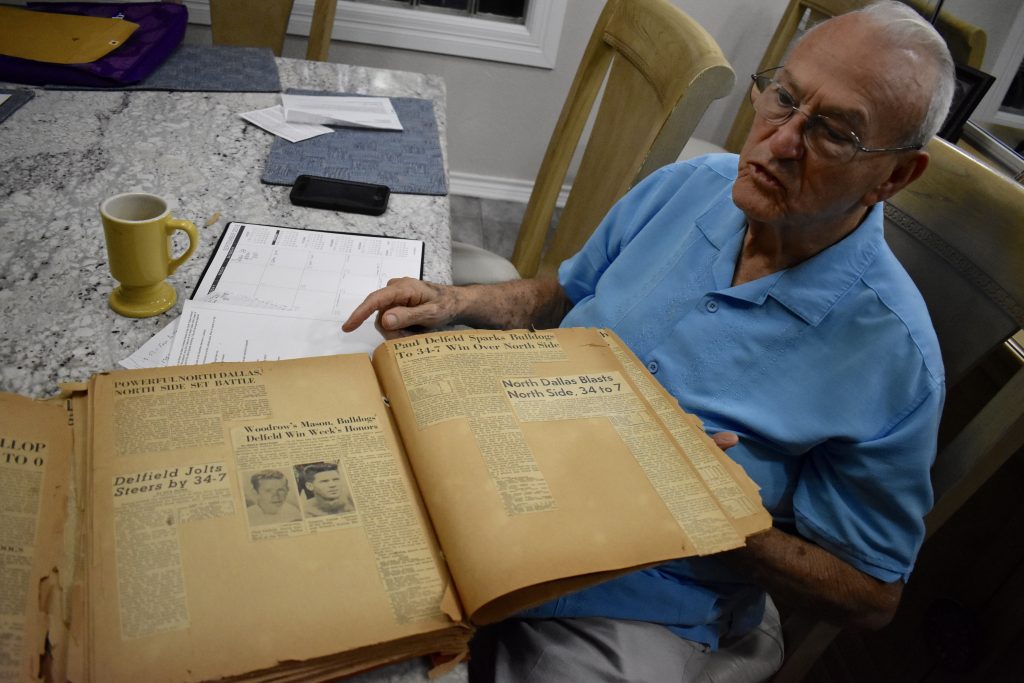 George Cole’s parents kept a scrapbook of his playing days at North Dallas High School from 1951 to 1953.

At 83, George Cole has plenty of stories about his playing days at North Dallas High School in the early 1950s. Cole played running back and safety on the 1952 playoff team — the last year that North Dallas made the playoffs.

Cole recently sat down to talk about those days when life was simpler. He had the scrapbook that his parents saved for him, plus the individual photos of himself and other players laid out on the dining table. He said he lived on California Drive between Carroll and Fitzhugh avenues.  He went to Spence before going to North Dallas as a sophomore in 1951.

This year’s North Dallas football team has dropped to Class 4A. The Bulldogs open the season against Thomas Jefferson at 7:30 p.m. Friday at Franklin Field. Could this be the year that North Dallas returns to the playoffs?

” I started every game on football and started every game in basketball when I was a sophomore,” he said, recalling his teammates at North Dallas. “We had a lot of good football players. Ernie Manicchia and we had Edgar Phillips. Paul Delfeld was a year after me. [Robert] Burgess played quarterback but he got hurt. [Richard] Cooke was fast but he was a half year ahead of me. So we all kind of changed around and everything. I started some games but I played in every ballgame. I started every game at safety. I ran punts back for a touchdown, interception back for a touchdown. I wasn’t really that big.”

“We think we were so good. Today, we probably wouldn’t start,” Cole said, about today’s high school players, “and we might not play.”

What was the reaction then to North Dallas making the playoffs?

“Fantastic. The better we got, the more the old guys came. The old guys that had played. And they were all losers,” he said laughing. “I hate to say that but that’s the way it was. So everybody got excited. The people were coming everywhere. We had bus rides and people following us and everything else.

“So, coach [Rufus Hyde] says, ‘OK, y’all come over here. All these guys that had played, are there on the practice field. Don’t listen to any of these guys because they all have something to say. Those guys were excited. Coach said don’t pay attention to those guys.”

The Bulldogs won their first four games in 1952, defeating Waxahachie, Houston San Jacinto, Fort Worth North Side and Greenville. Up next was Highland Park.

“We were undefeated when we played at Highland Park,” Cole said. “We went there, and they just beat us.”

After losing to Highland Park, the Bulldogs fell to Woodrow Wilson the following week, but came back with wins over Adamson, Sunset, Forest, and Crozier Tech.

Cole remembers finishing in a tie for first place in district.

“Let me tell you about it. It was a tie, but we got to play,” he said. “And we played Fort Worth North Side and we beat them. So we were big shots. OK.” 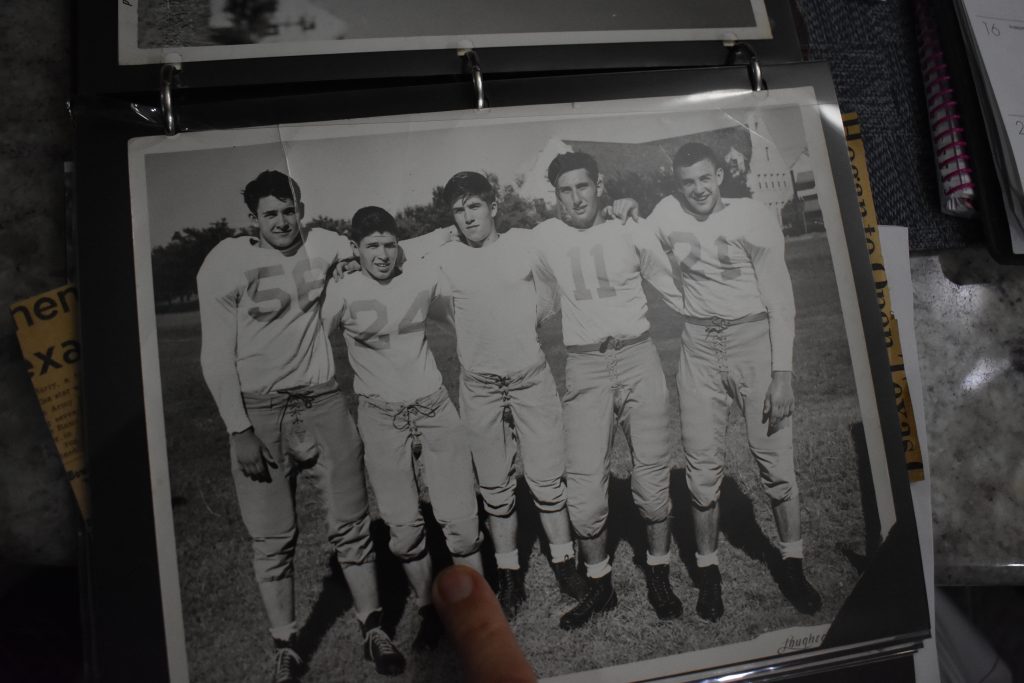 George Cole (21) and his teammates (from left) Glen Witherspoon (56), Chester Chreene (24), unidentified player, and Ernie Manicchia (11). “We ran around together,” Cole said of his friendship with Ernie. “We played ball all summer long. Very good Italian guy. Outstanding football player.”

Next was the trip to Lubbock to play Lubbock High School, the defending state champions. The Bulldogs flew to Lubbock thanks to a teammate’s father and uncle, who were pilots and flew for Braniff Airlines.

“We were the first team to fly, but it was all their family that actually got us going,” Cole said.

The weather was bad that week leading up to the state semifinal against Lubbock, Cole said.

“Before we left, the weather had cleared up. It was bad. Like Friday, when we were working out, it was cold and rainy and terrible,” he said. “So, we left Saturday morning and we landed. There was a big parade. I don’t know where they came from. I don’t who it was but they made a big deal out of it. They met us at the airport. So we went from the airport to the stadium.”

The Bulldogs were already hurting from injuries entering the game against Lubbock. Starting quarterback Robert Burgess was out with a wrist injury and second-string quarteback Edgar Phillips “broke a leg or something,” Cole said.  Taking the QB reins against Lubbock was Richard Cooke.

“Cooke was fast and he ran track. Good ballplayer,” Cole recalled. “He was a year ahead of me. He became the quarterback. He had not one day experience at quarterback. So, what happened was …

“On the opening kickoff, I ran it to the 50-yard line,” he continued. “I thought we were going to do good. Well, nothing worked. We had three kicks blocked — 3 out of 4. Punts. Sometimes I would punt and sometimes he would punt. So, he got his two blocked, so on the third one, I got blocked. So I moved back, and on the fourth one, I got it off.”

Cole said he and Ernie Manicchia scored the Bulldogs’ touchdowns. Cole said his touchdown was on a quick pitch to the outside in the fourth quarter.

“We were so far behind, Ernie asked, ‘When are they going to bring in the second string,’ ” Cole said with a laugh.

Everything went Lubbock’s way in a 42-14 victory.

In 1953, the Bulldogs had an even better season, going 9-1. But the lone loss was to district champ Woodrow Wilson. Only the district champion advanced to the playoffs back then.

“They had a good football team and I knew all their guys,” Cole said about the Woodrow team. “What it was their coach outcoached us. We were ahead, and we didn’t have long to play. Less than a minute. So this is the way it happened. When they over here, we would rotate. So this guy here would drop back. I would go this way and this guy would go this way to get the runner.

“Well, the thing went over here,” Cole said, outlining the play on a piece of paper. “He was a halfback, and they had a real good end. We didn’t rotate, and the end, Ronnie Mason came over here. They threw the halfback pass and he was open for the touchdown with 13 seconds left. We ran the ball to the 20- or 30-yard line, and we gave the ball to [Paul] Defeld every time. He couldn’t make anything happen because them guys were on top of us. Their coach outsmarted us.” 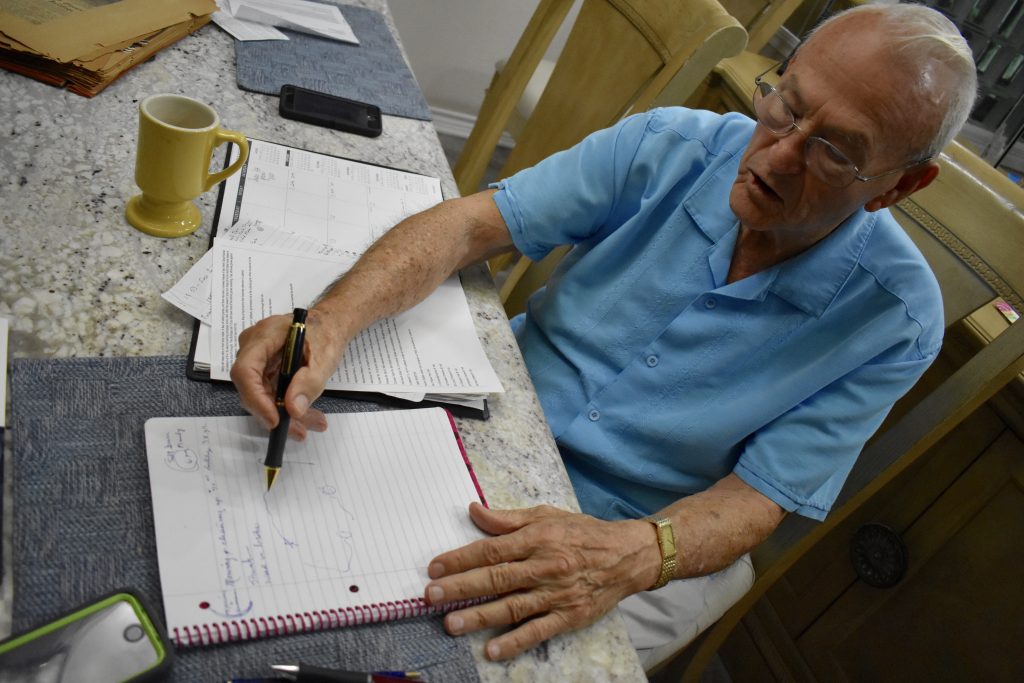 George Cole outlines the play by Woodrow Wilson that led to a 14-13 loss with 13 seconds left in the game in 1953. That was Bulldogs’ only loss but in those days, only the district champion advanced.

Cole explained that he “wasn’t a very good student. I didn’t like it a lot.” But he did like was working out and playing football. His upbringing helped shape him for playing at North Dallas.

Cole said he attended elementary school with Ernie Manicchia at Sacred Heart Catholic School, but after separating in eighth grade, they got together again as sophomores at North Dallas.

Cole recalled playing with “the guys that I went to school with” on a lot with gravel and pecan shells.

“We played football (on that lot). Oh yes we did,” he said. “I never had buttons on my shirt when I got home. The nuns had a walkway, and they said we could not play anymore. So, we played tackle on the foot. That was a lot worse than playing tackle.

“Then we went to public school and they had soccer. I didn’t know how to play soccer,” Cole said. “I just took the ball and ran with it. I put it down and kicked it. We played soccer-football and the playground teacher took the football away. So I took off my shoe, and we played tackle the man with the shoe. The background we came from helped us. It really did. Because I had a broken arm, two fingers busted, my nose busted.”

He recalled one game against Adamson: “I was knocked out and they took me to Parkland. Parkland was down the street. We were playing against Adamson and they got a 15-yard  penalty and I went to the hospital.” 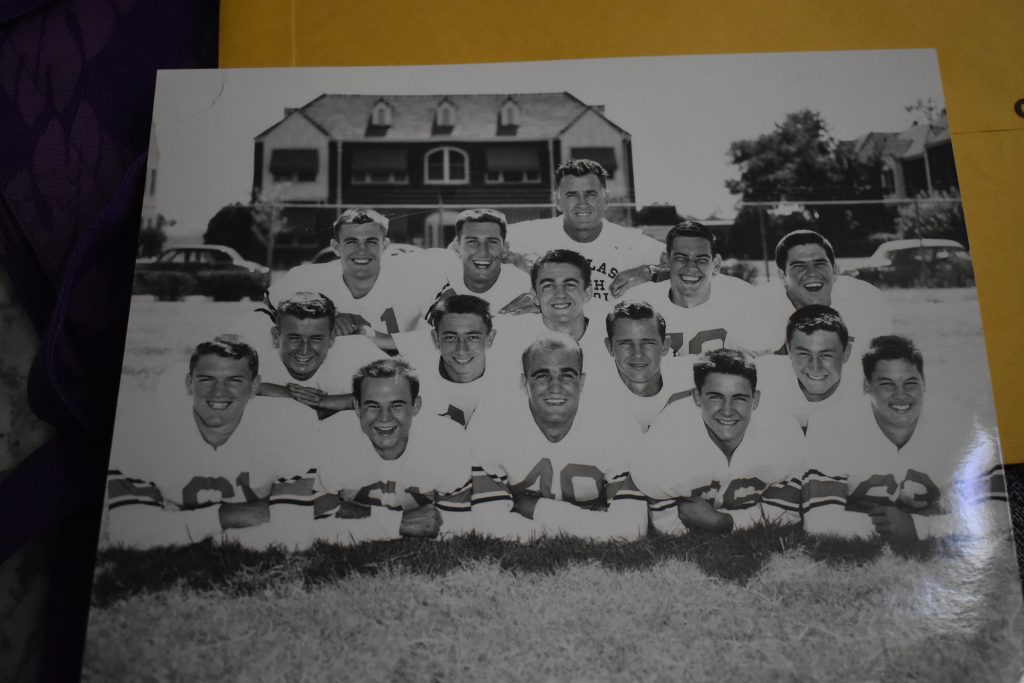 George Cole (third row, top left) and his ’52 or ’53 teammates — Cole couldn’t remember what year this was taken. 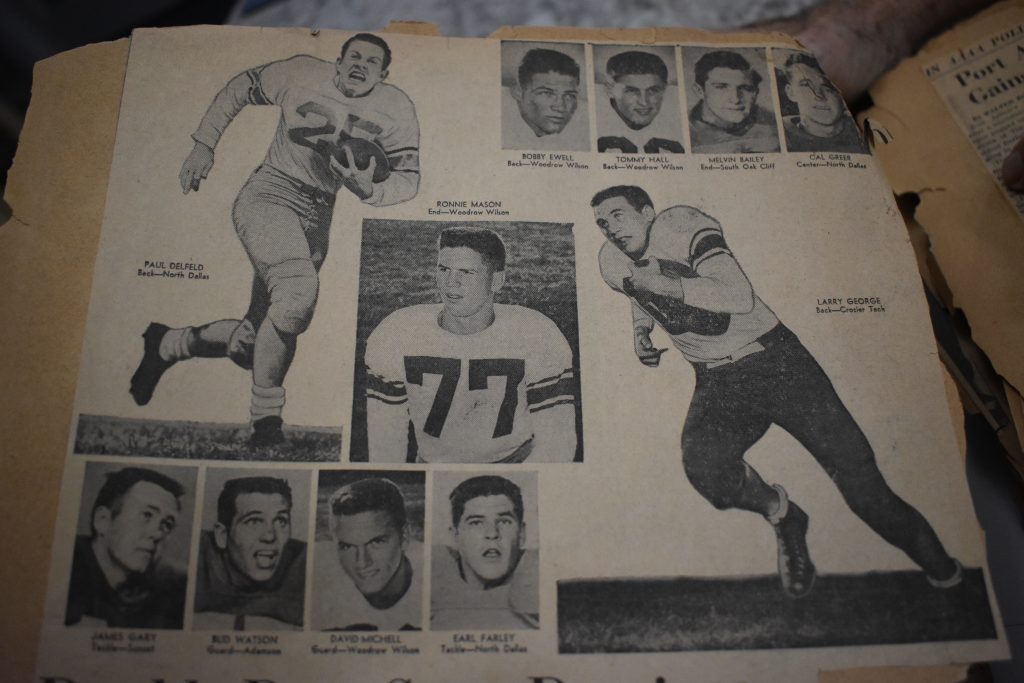 The 1953 All-City team featured North Dallas’ Paul Delfeld in upper left-hand side. Cole said only players on offense were recognized. 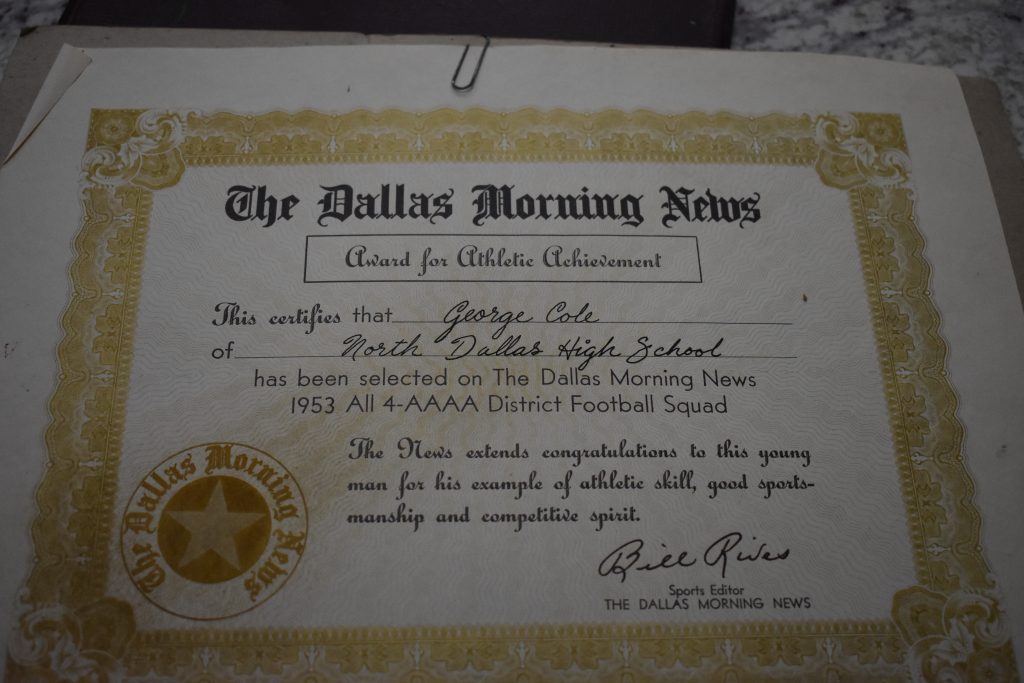 George Cole was honored for making All-City team in 1953. He said he wasn’t sure how he received this because he started

at safety and rotated in the backfield. 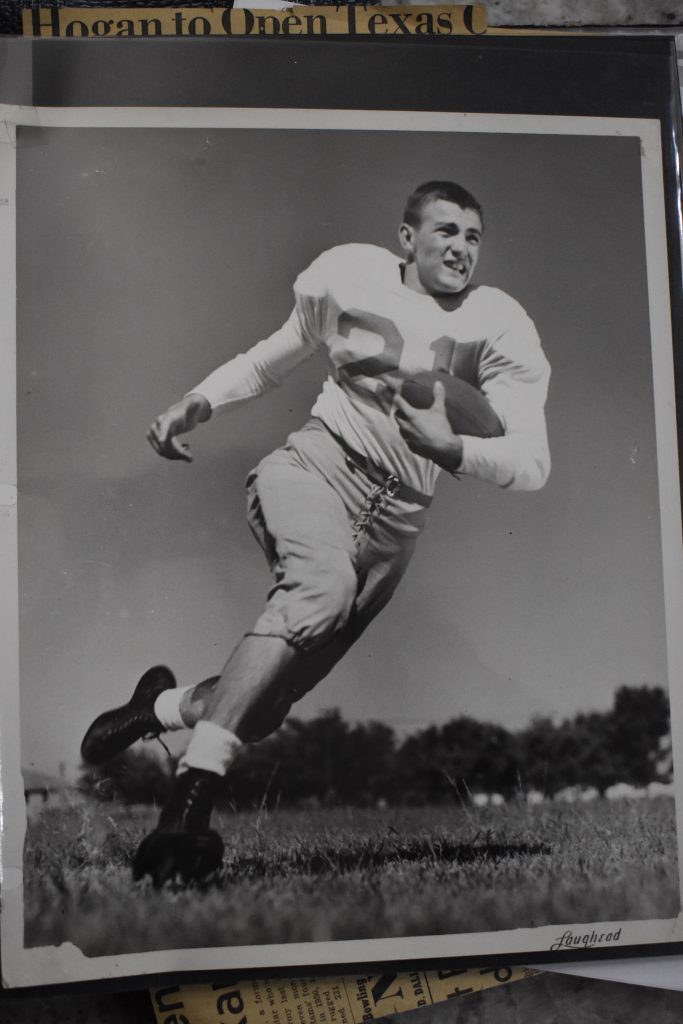 George Cole  said when it came to taking photos, sometimes, the coach would “get his towel and he would hit us like a guy was going to tackle you.” 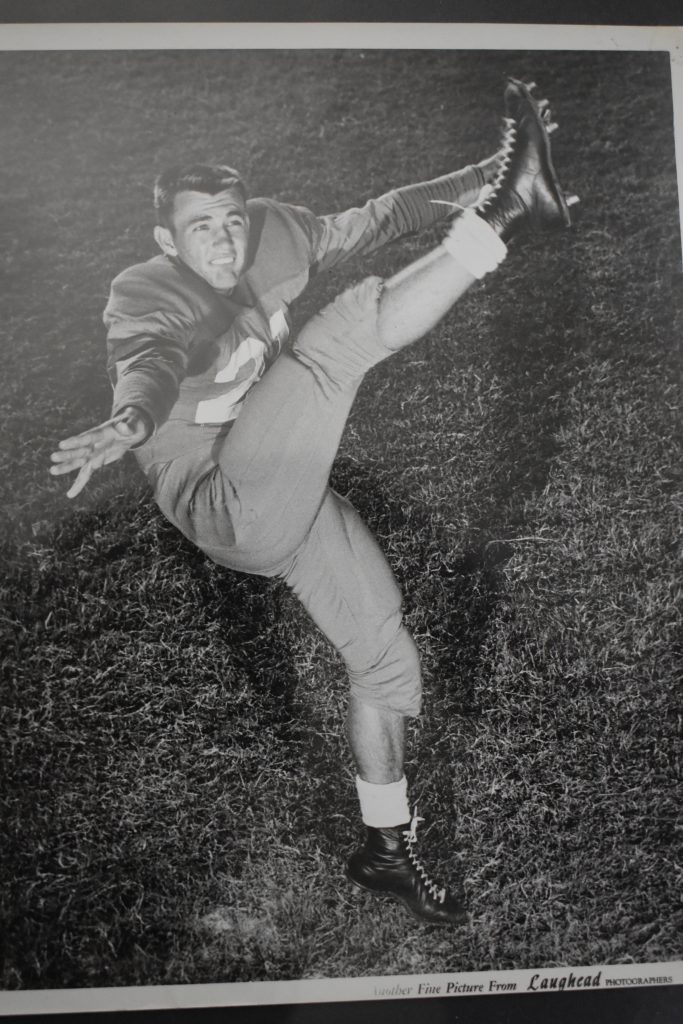 George Cole was also a punter. He remembered one time kicking the ball so high that he caught it.