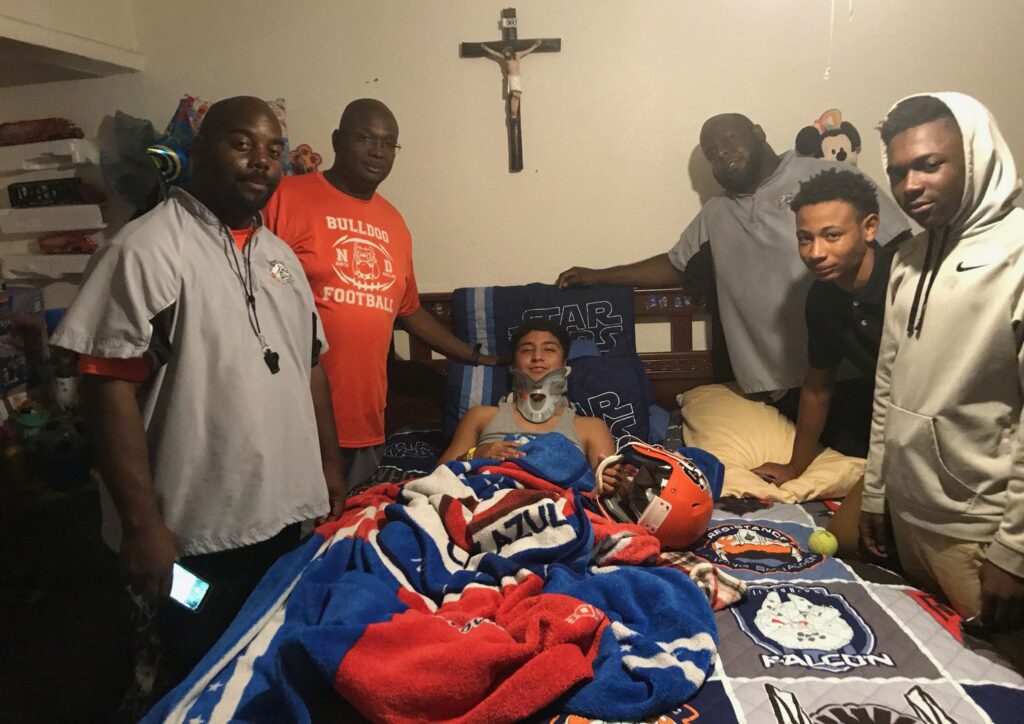 North Dallas coaches Leon Brigham (from left), Fred Johnson and Matthew Clay, along with teammates J’Vonn Hanson, and Trent Heard were among the visitors at Luis Rayas’ home. Luis was injured Sept. 27 against Carter.

Freshman Luis Rayas is wearing his No. 31 jersey at the North Dallas football games. He can be seen sitting or standing on the sidelines at the games, showing his support for his Bulldog teammates. Luis isn’t able to play because he’s recovering from a “spinal cord bruise.”

“I got to do it. Team, team,” Luis said, walking slowly next to his mom, after Thursday’s game against Wilmer-Hutchins.

Luis was involved in one of football’s scariest moments on Sept. 27 during the third quarter of the North Dallas vs. Carter game at Franklin Field. He said he saw the Carter Cowboys running back going up the middle. He turned around and made an awkward attempt to make the tackle. But the Carter player’s knee hit him in front of his helmet.

Luis just laid there. He said he couldn’t get up. Team trainer Nicholas Saldivar and Dr. Luis Palacios checked on him. The game was delayed for a half hour or more, and the number of people surrounding Luis began to grow. His mom was at his side. An ambulance was called, and Luis was placed in a stretcher and taken to the hospital.

Saldivar said Luis was awake at the time and there was numbness on his right side. He was taken to Presbyterian Hospital that night, and then to Children’s Medical Center on Sept. 28. He was released on Sept. 29 with a neck brace. He was able to walk and would be able to attend school the following week.

At the game against Hillcrest on Oct. 12, Luis sat on the bench wearing the neck brace. He was standing in his No. 31 jersey during the Wilmer-Hutchins game last Thursday. 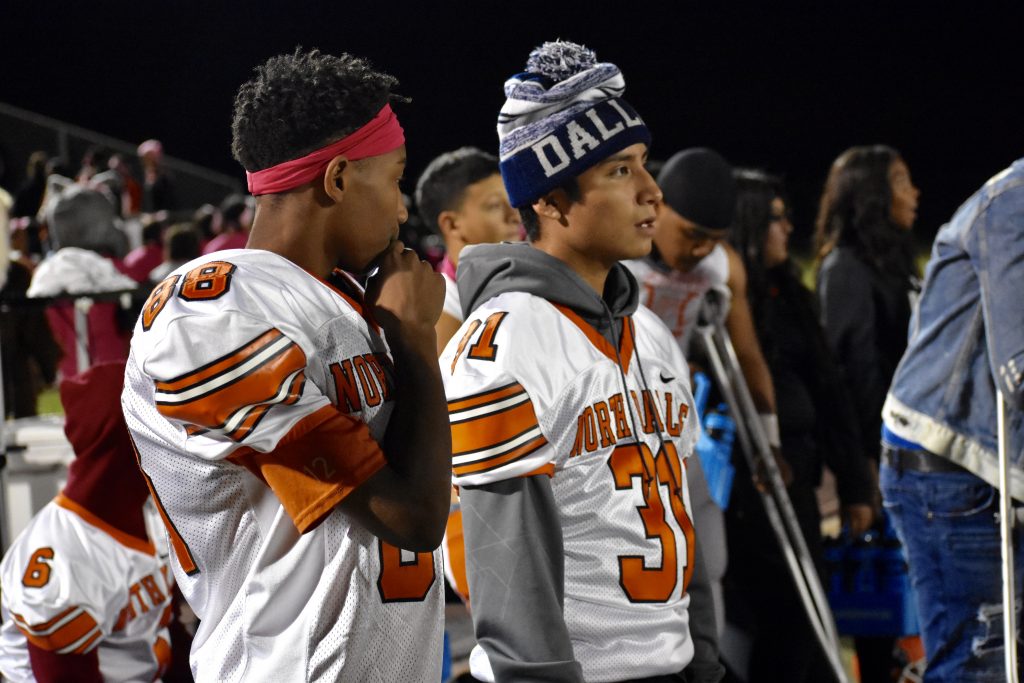 Luis Rayas (31) talks to Jaylen Newhouse as they watch the action against Wilmer-Hutchins.

On Sunday, Sept. 29, Luis talked about the play as he sat in his hospital bed at Children’s Medical Center. He was watching the Cowboys-Lions game on TV, and was waiting to be released later that day.

“I was going for the tackle,” he said, recalling the play. “I saw his knee on my neck. My neck just popped. When I tried to get up, my right side was like, hey, I couldn’t move my right side. My whole body was wearing down.

“A lot of things went into my head. I thought I was going to die for a second.”

The 14-year-old recalled that moment after the tackle.

Luis said he wasn’t scared playing linebacker against the bigger players from Carter.

“When I saw that they were big, well, they’re big, and I was going to go for their legs,” Luis said. “I always try for the legs. I wasn’t really scared. A tackle is a tackle. Just get up and make another tackle. But that tackle was the last tackle for the whole season.”

Luis was feeling better and was able to walk the next day, Sept. 28.

“I can feel my right side a little more. The strength is coming back,” he said Sept. 29 at at Children’s Medical Center. 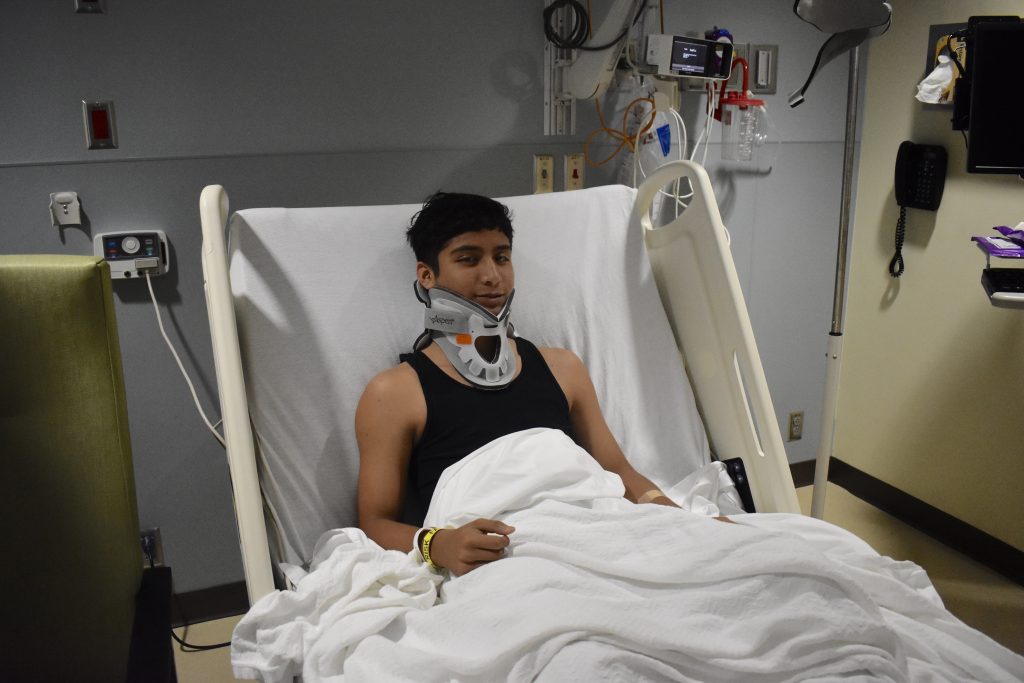 Luis Rayas was preparing to go home from the hospital on Sunday, Sept. 29.

For North Dallas head coach Fred Johnson, the injury is an eye opener.

“In the second half, Luis got hurt and the kids played for him,” Johnson said after the Carter game. “It was a moment where as a coach, you got to understand that this is somebody’s child. This sport is about family and it hurts. My thoughts and prayers go out to the family.”

Luis said he will be going to physical therapy and the recovery could take a “month or two” or longer. The therapy will include treatment to his right arm and right leg.

Luis was proud to be playing varsity football this season as a freshman. He filled as a kicker against Fort Worth Diamond Hill-Jarvis. He also got more playing time when the Bulldogs lost linebackers Franscisco Garcia, Cinqué Lampkin and Terrell Carter to injuries.

Asked on Sept. 29 what he would like to say to his teammates, Luis said, “I’m doing way better than Friday. I can feel my right side. I can move them now. I can walk way better. I’m progressing little by little but next thing you know, I’ll be over there at school. I will be  showing up at the games, not playing, but showing up to support them.

“Thank you to my teammates who came to support me, and for everyone who had me on their prayers. For the coaches who where there with me when all of this happen. But most of all my family who was by my side.”

The Bulldogs play Pinkston at 7:30 p.m. Friday at Loos Complex in the Homecoming game. 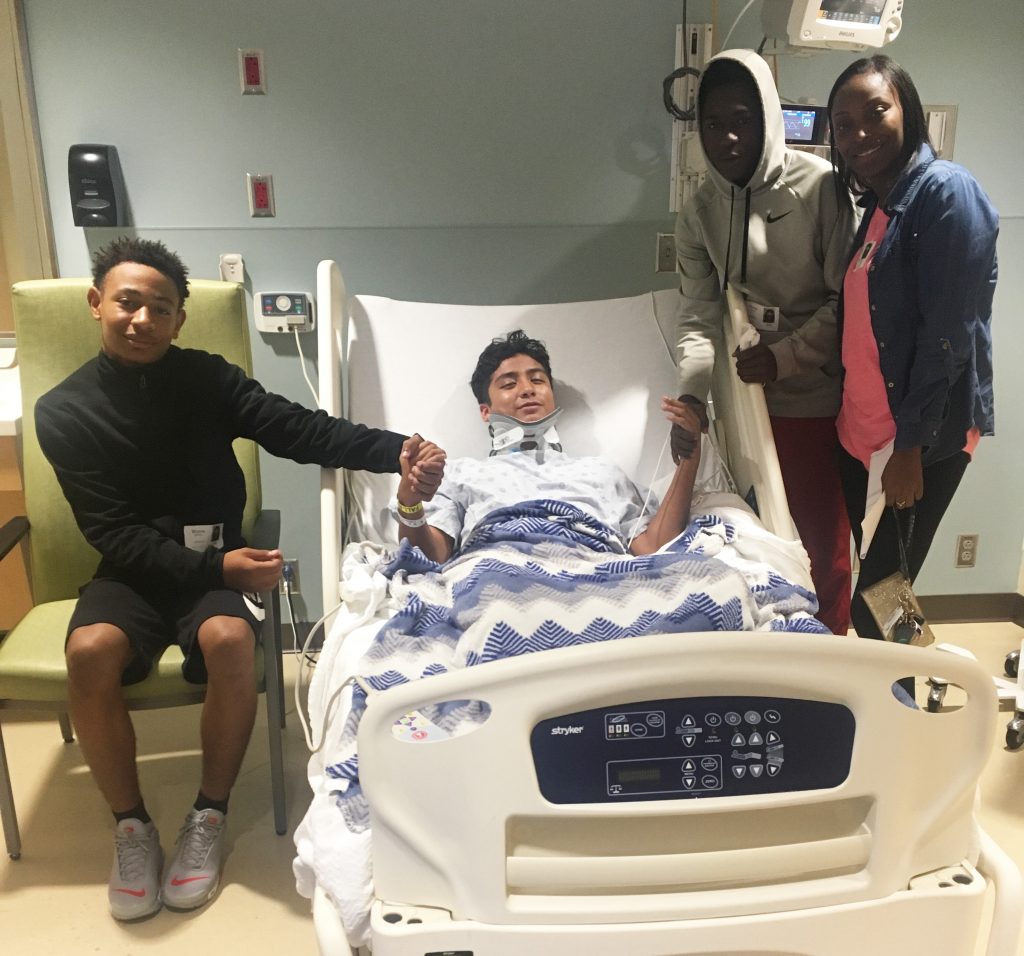