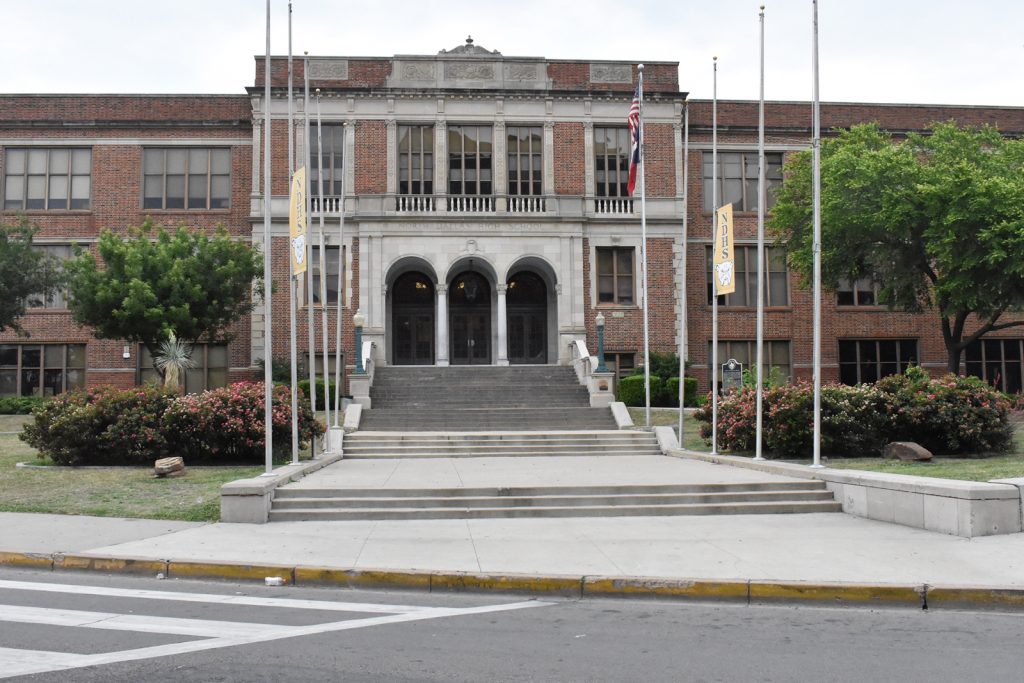 The renovations at North Dallas will include the closing of Haskell Avenue and the addition of a courtyard.

The Dallas ISD school board gave the school a huge present, approving $46.5 million in renovations at its December meeting. The renovations will include the closing of Haskell Avenue and making it part of the campus, a new 2,000-seat competition gym, new heating and air conditioning system, said North Dallas Athletic Coordinator Brian Barnett.

“I’m excited. It’s a lot of work over the course of the last year,” Barnett said. “Ms. [Principal Katherine] Eska was able to make contact with the right people.  Some other schools in the district are kinda going through the same improvements but didn’t necessarily go about it the way we wanted to go about it.

“We wanted to go through the right channels and tried do it ourselves at first rather than get alumni, parents and all that involved, and go to board meetings. We got in front of the right people, made a pitch, showed them our campus and what our needs were, and that kinda got the ball rolling.”

“He helped a great deal. Dustin Marshall was instrumental in working with Ms. Eska,” Barnett said. “Our original allotment in that bond was $8 million. So that allotment increased and a lot of that had to do with Dustin Marshall and his influence on the board.”

Marshall said he was “extremely pleased” the board moved up the repairs and improvements, and also increased the bond allocation.

“I am extremely pleased that the Dallas ISD Board has agreed to move up North Dallas High School to the next Phase of the 2015 Bond work and that the Bond allocation has moved from ~$8M to over $46M,” Marshall said in an email. “This will enable the school to undertake some much-needed repairs and improvements to athletic facilities.  Under the amazing leadership of Principal Katie Eska, NDHS is undergoing a rapid transformation, and I am proud of the Board for investing behind her leadership.  Go Bulldogs!”

Barnett stressed that there won’t be any physical changes to the building, except adding a courtyard in the front.

“It’s kinda tricky too. it’s pretty iconic, historical building,” he said. “You don’t want to change it too much, but obviously, it needs some upgrades. I don’t think you’ll see anything on the exterior that’s different but maybe  improvements. You’ve already seen new windows.

“It’s going to be cleaned up on the outside, but there won’t be any physical changes on the outside that you can see, except the courtyard.”

Barnett said one of the biggest changes is closing off Haskell Avenue between the two campuses.

“That section of Haskell will no longer be a street. It will be part of our campus,” he said. “The district is buying that one block from the city of Dallas.”

And in addition to the 2,000-seat competition gym, Barnett said there will be new coaches offices, a new weight room, and new training room. Improvements to the interior of the building include a new kitchen, changes to the cafeteria. new floors, new paint, new ceilings, new HVAC (heating and air conditioning), bathrooms remodeled, and getting rid of the lockers, Barnett said.

The upstairs (or girls) gym will be converted into a fine arts room, for the band and dance. And the current band hall will be part of the athletic wing, Barnett said. The current boys gym will be an auxiliary-type gym and will also be renovated.

“My biggest hope, and it’s not at the top of the list right now, but I think we could make it happen is turfing the fields,” Barnett said.

The portables and the parking lot in the back of the school will be eliminated for the new gym, Barnett said. Instead, the parking lot next to the freshman center will be extended across Haskell to the current parking lot on the Cole Avenue side.

Again, Barnett stressed that a timeline hasn’t been set for the renovations.

“We don’t have a beginning date,” he said. “We’re optimistic that they could get started by the end of the school year but we don’t know that for sure. I don’t know how much preliminary work has been done yet.”