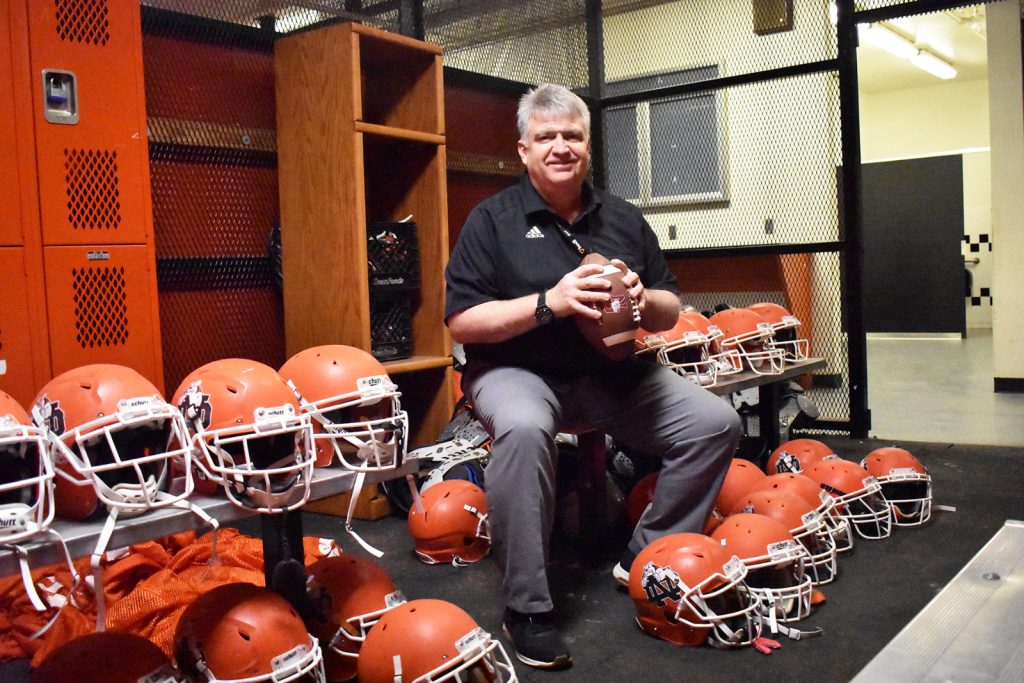 Football coach Bobby Estes left Woodrow Wilson in December after 21 years at the East Dallas high school. He wasn’t out of a job very long.

On Friday, Estes was introduced as the North Dallas Bulldogs’ next football coach.

Athletic Coordinator Brian Barnett described the hiring of Estes as a “home run.” Or how about a grand slam?

“I’m just thrilled to death to have Coach Estes here,” Barnett said. “He’s won more games than just about anybody in the history of the DISD. He’s had a lot of success. He’s going to be a great mentor for our young coaches. When he’s finished at North Dallas, his legacy won’t be Woodrow Wilson, his legacy is going to be building this program and turning it around and breaking the playoff drought. We’re just blessed to have the opportunity to get him on board here.”

Estes brings an impressive resume to North Dallas. His record of 141-90 makes him the second winningest coach in Dallas ISD.

“We’re extremely excited to have Coach Estes on board,” North Dallas Principal Katherine Eska said. “During the interview process, we were looking for somebody who had strength and skill development in building a program. That’s something that he has a proven record of doing, and we’re extremely honored and excited to work with him.

“We look forward to him motivating our kids and building that team. I know he has his sights set on big goals that we’re definitely excited about. We here to support him in working with our kids.”

Estes replaces Coach Fred Johnson, who went 4-25 in three seasons. Estes will be building on the foundation laid by Johnson. 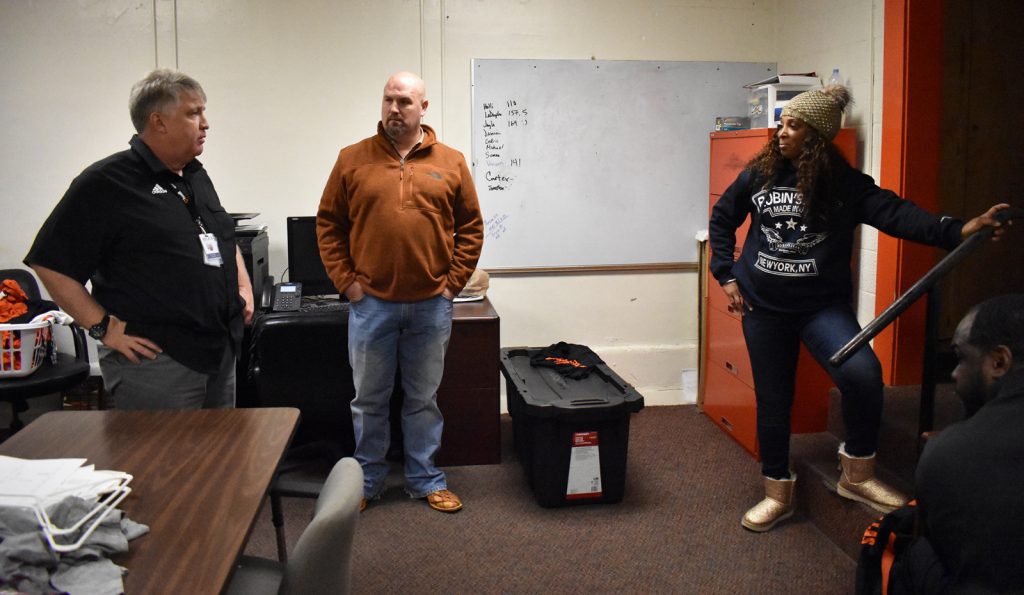 “But I do know this, they have great potential and I am very frustrated when I’m not winning. We’re going to excelerate this time frame, and I hope that playoff football is in our future.”

After graduating from Greenville College-Illinois, Estes began his coaching career at Garland High School in 1987 . He went to West Mesquite in 1991 as the defensive coordinator, and then moved to Molina in 1997 as interim football coach. He went to Woodrow Wilson in 1998 as football coach and campus athletic coordinator.

Estes took some time to answer some questions:

Q. Coach Estes, what would you like to say to the student body and staff?
A. I’m extremely excited to be here. Really grateful to Coach Barnett and Ms. Eska. It’s an honor to be part of a school with this prestigious history. Been cross town and a rival, and now I’m a team member. I’m excited and we have our work cut out for us but good things I hope will happen.

Q. What would you like to say to the alumni?
A. From my past history in Dallas, the North Dallas alumni are well known for its support and I just hope to earn their respect and earn their support. My job is to … and not only my job but my heart is to … earn those things. We’re going to work hard, do things right and we’re going to put a product on the field that they’re going to be proud of.

Q. What are your expectations for next season, or outline for the program?
A. First of all, you better go into every game hoping to win, or expecting to win, or preparing to win. And we’re going to do those things. You know change is difficult, change is hard, change takes hard work but we’re going to build with that. I don’t limit kids. My job is to put kids in position to be successful. I think the coaching staff is a good group of young men. We’re going to go work hard, and then we’re going to take every day, every game … it’s a process. I’m not a real good prognosticator of what’s going to happen in the future. If I did, I would pick seven numbers. But I do know this, they have great potential and I am very frustrated when I’m not winning. We’re going to excelerate this time frame, and I hope that playoff football is in our future.

Q. Could you tell us about your history at Woodrow?
A. Well, I got to Woodrow in ’98. In fact, almost the exact time now. It was right when baseball was starting 21 years ago, and we’ve been successful. When I took over Woodrow, they were 2-38. This program is in better shape than I think what Woodrow was in. It’s takes sweat equity, it takes a little bit of luck, takes a lot of hard work, and we’re ready to do that.  The great thing is that this is not new terrority. I know the kids, I know the area. I know the officials and that’s a big one. But we’re going to go to work. Good things will happen. 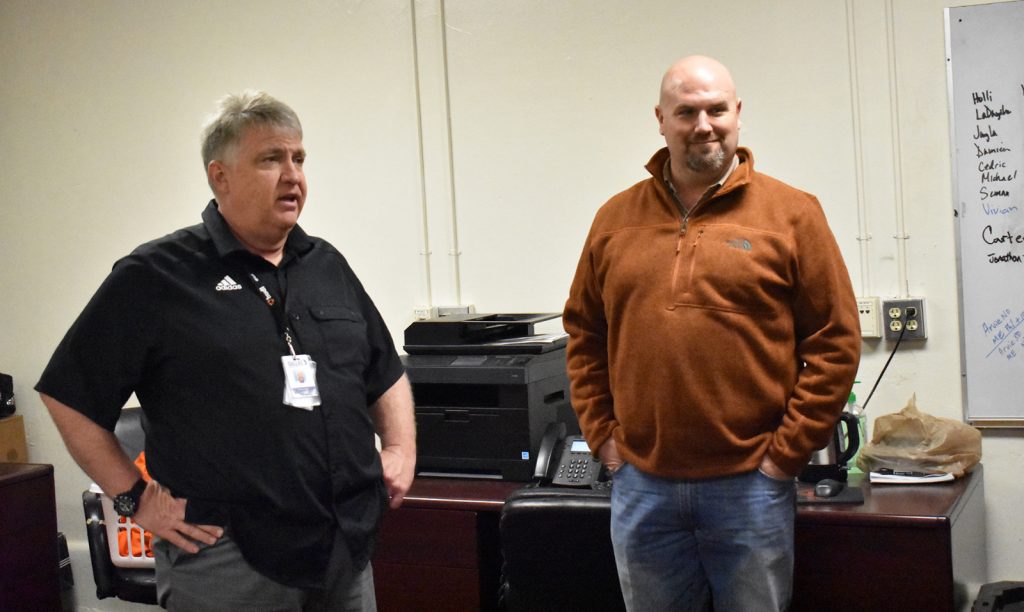 New head coach Bobby Estes: “First of all, you better go into every game hoping to win, or expecting to win, or preparing to win. And we’re going to do those things.”

Q. You’ve been in 5A, and now you’re in 4A. Do you see a difference?
A. Football is football. We just left one of the toughest districts in the state, with two Mansfield schools, Highland Park, and Lancaster. But at the same time, you’ve got Carter, Alvarado, Carrollton Ranchview and Wilmer(-Hutchins). Wilmer is coming back with a great quarterback. There’s not an easy football game in high school football anymore. I’m not worried about what they’re going to do, I’m really focused about what we’re going to do. I can’t control them, but I can control what North Dallas football is from now on. We’re going to focus on the little things, We’re going to work hard every day.   We’re going to build good days on top of each other. If everything goes well, we’ll be a pretty good football team come August.

Q. You’re had passing quarterbacks at Woodow, do you set your offense according to the kids or how does that work?
A.  Absolutely. We’re not an I-formation, but we have a semblance of that. If you watch Texas,  if you watch some of the Auburn and Clemson [games]. That’s what most the offenses are right now. We’re with that. Noel Mazzone is a guy that I really like, and some of his passing game. We’re going to be what I call snag passing game, with three-step short game. We’re going to be an RPO team. The quarterback is going to be multifaceted. He’s going to have to run the ball, he’s going to have to throw the ball. In the past, I had Ben Clear that ran for 1,800 yards and I had Cade Fennegan who threw for 3,000 yards. I had Piers Christian who threw for a thousand, ran for a thousand.

Q. Are you a defensive guy or are you an offensive guy?
A.  In high school football, we can’t really specialize. At West Mesquite, I was the defensive coordinator for seven years. At Woodrow Wilson, I usually called the offense. So, I will surround myself with talented young coaches. There’s some young men on this staff that fill that role and then we’ll go from there. But part of my job is grow them, and we’ll going to do that.  I’m pretty capable on both sides of the ball.

Q. Any final comments?
A. You know, I’m extremely excited to be here. This school has a rich history, and it also has a drought. If we answer the bell, do things right, we’ll be on the winning side more times than not. It will be a change in legacy. 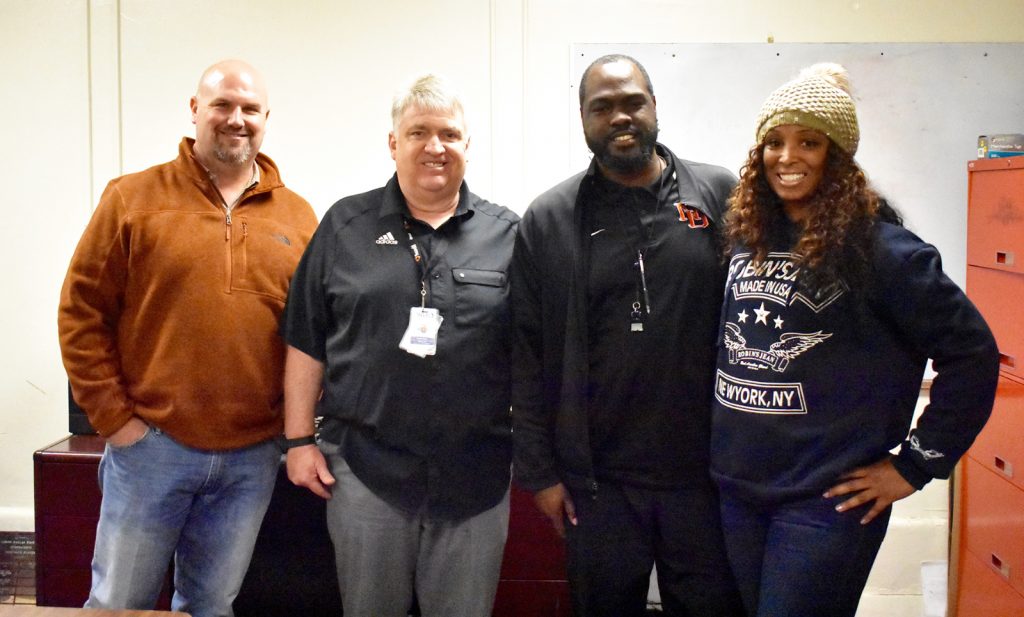