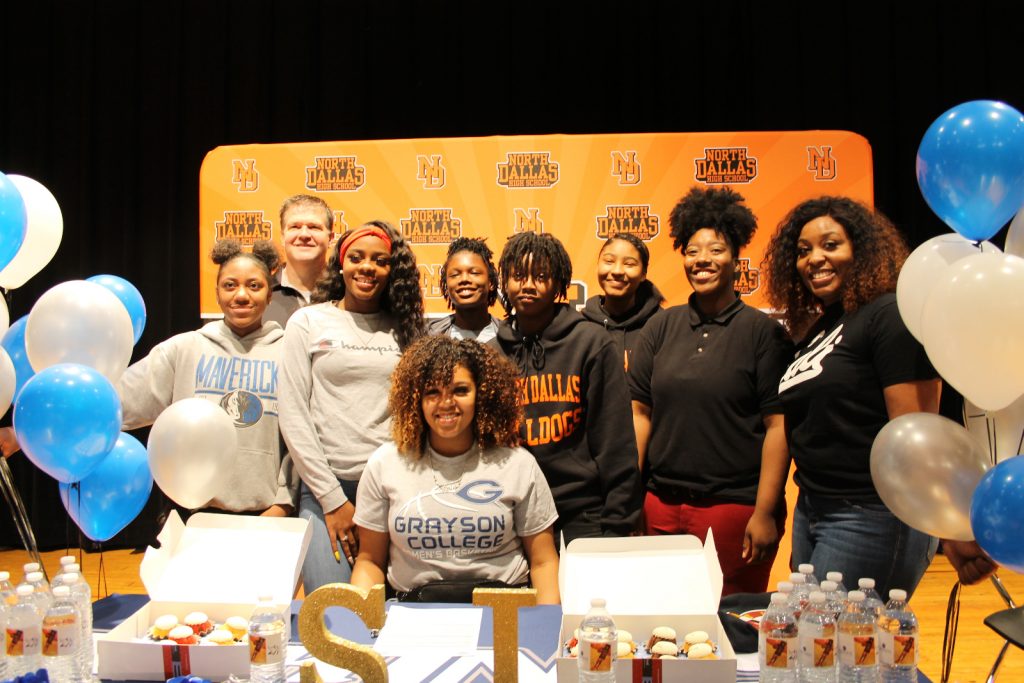 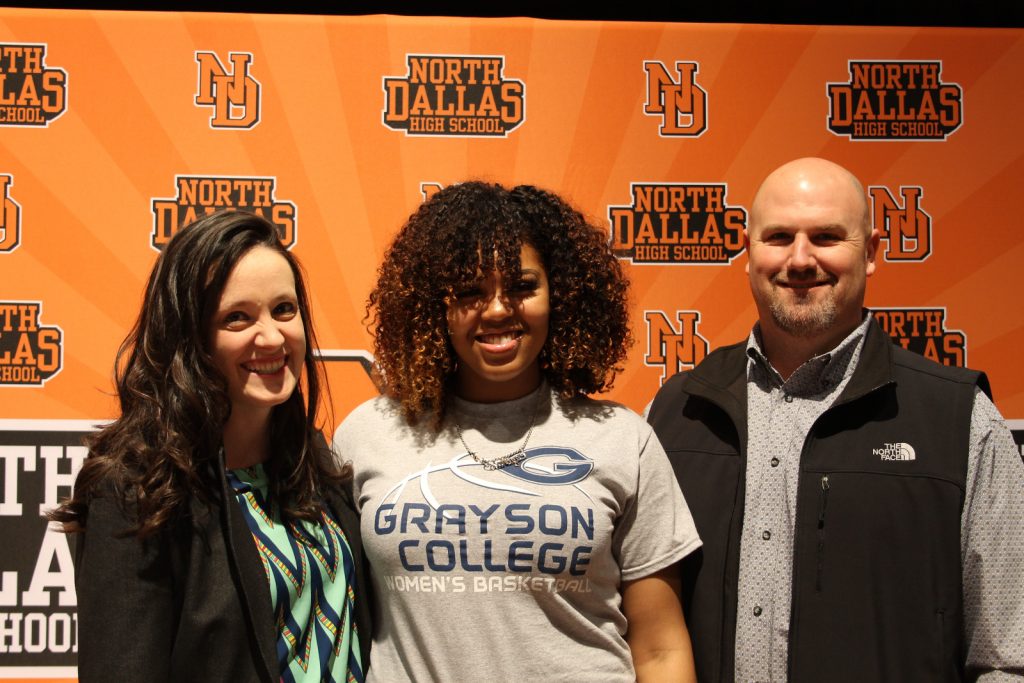 North Dallas senior SaNiya Lampkin will be taking her basketball talents to Grayson College this fall, after signing a letter of intent Friday in the school auditorium.

SaNiya, who played center-forward this season for the Lady Bulldogs, has been an outstanding basketball player at North Dallas. Her accomplishments include being named first team all-district and Defensive Player of the Year in District 12-5A as a sophomore and first team all-district and Co-MVP in 12-5A as a junior. The awards for this season will be released after all district teams are out of the playoffs. North Dallas made the Class 5A playoffs her sophomore and junior years. She also has a 3.9 GPA and is ranked in the top 20 in the senior class.

“I am very excited for the opportunity.  I have worked really hard and it has paid off,” SaNiya wrote in an email about signing with Grayson College.
“The coaching staff believes in my abilities and want to take the time to develop me as a player on and off the court,” she said. “Plus they gave me an offer I couldn’t refuse.”

SaNiya averaged in double figures in scoring and rebounding for the Lady Bulldogs this season. She had a game-high 29 points against Hillcrest and 16 rebounds against Madison. 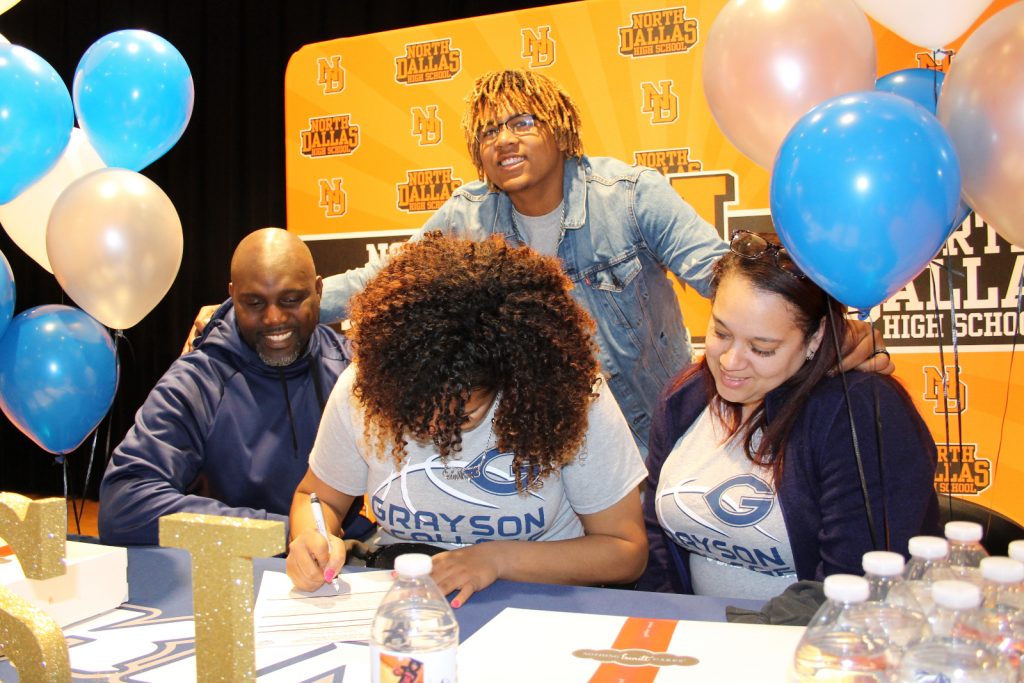 SaNiya signs her letter of intent with Grayson College with family — Dad Mickel and Mom Laurissa and brother Cinqué — looking on.

“SaNiya has brought a level of competitiveness to North Dallas High School that hasn’t been here in quite some time as I understand,” said North Dallas Coach John Edwards. “She can be a force on the defensive end blocking shots and rebounding.  The ability to be able to hit the outside shot as well as scoring under the basketball shows her versatility.

“I think SaNiya has the potential to be as good as she wants to be at the next level.”

Grayson College’s women’s basketball team is 13-15 overall and 8-6 in conference play with two games remaining. The Vikings are led by Coach Bill Damuth. Grayson College is located in Denison, north of Dallas.

“I think he is a great coach,” SaNiya said about coach Damuth. “He has coached on all college levels for over 25 years and won several championships. His knowledge of the game is very impressive and I think he is going to bring the best out of me as a player.”
Asked what she will remember most about playing at North Dallas, SaNiya responded, “My teammates.  We have been playing together since middle school and they are my family.”
Any final words?
“I have learned and grown as a player and I appreciate everyone that took part in my overall improvement,” SaNiya said. “I want to thank all the coaches that came to North Dallas. I have learned different aspects of the game from each and everyone one of you. I want to thank my parents for not giving up on me. Thank y’all for pushing me to be great and not average.  I’d also like to thank my grandparents for supporting me all the way through my journey thus far.
“I want to thank Coach Dre for not only teaching me how to play ball but also for coaching me to become the best young lady I can be. I want to thank my ProSkills family for showing me how hard I have to work if I wanted to compete and stand out in any gym. Last but not least I want to thank God for my gift. Without You nothing is possible.”
Congrats, SaNiya! 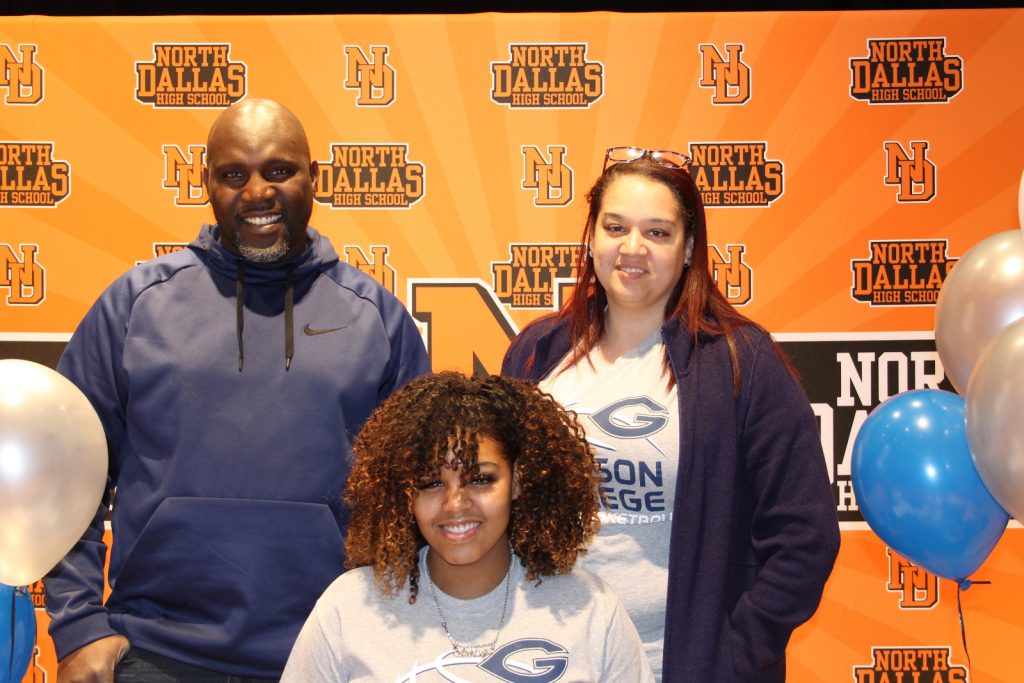 SaNiya Lampkin and her parents, Dad Mickel and Mom Laurissa. 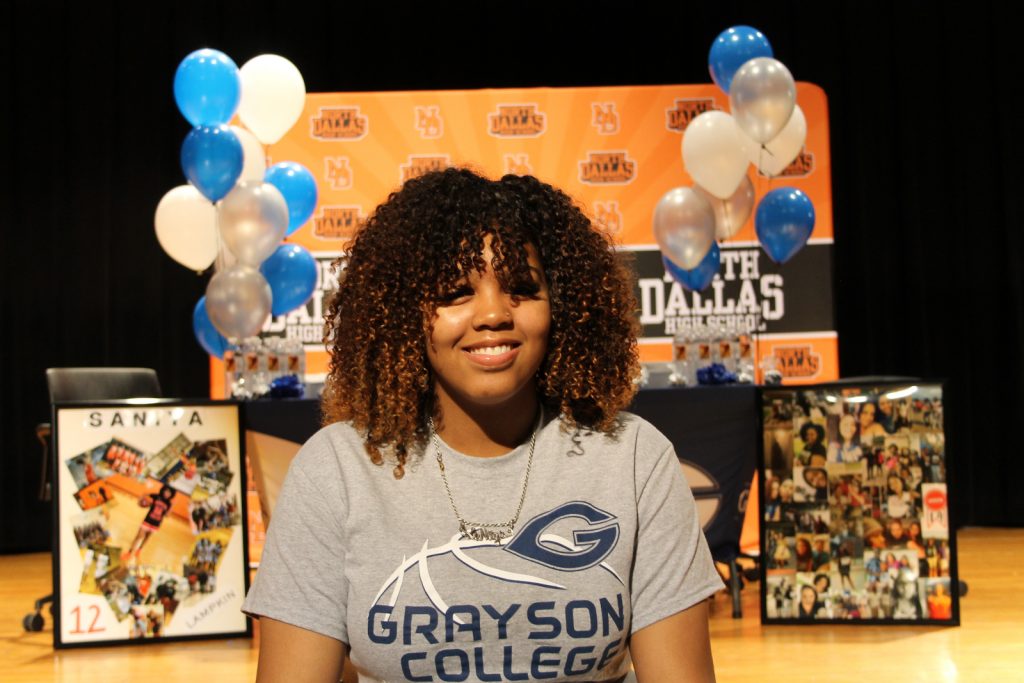 SaNiya has been an outstanding basketball player for North Dallas the past four years. 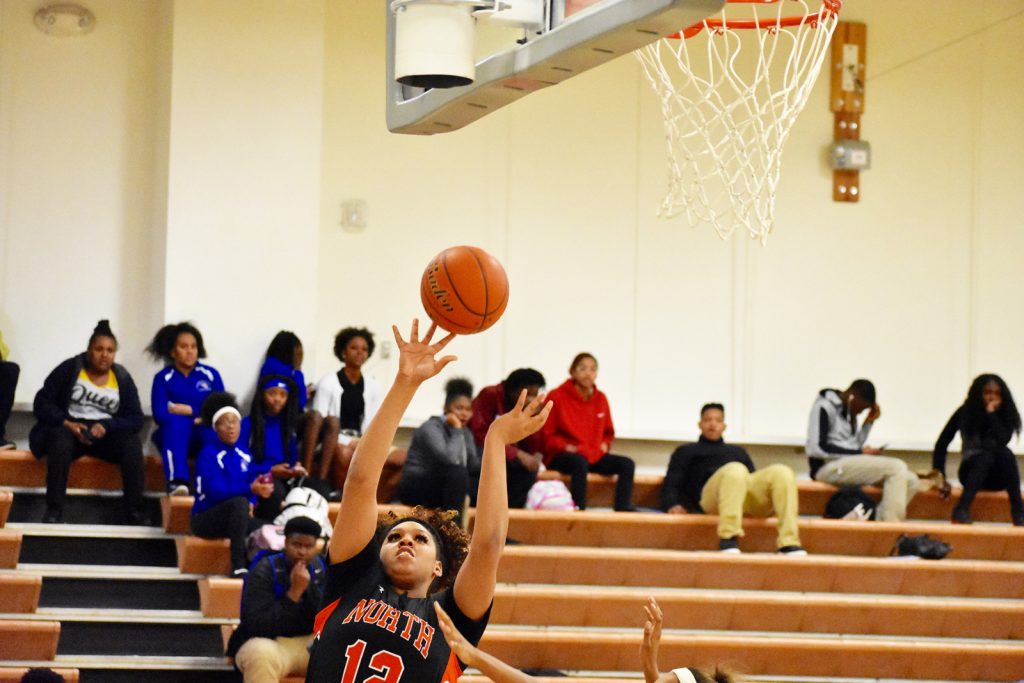