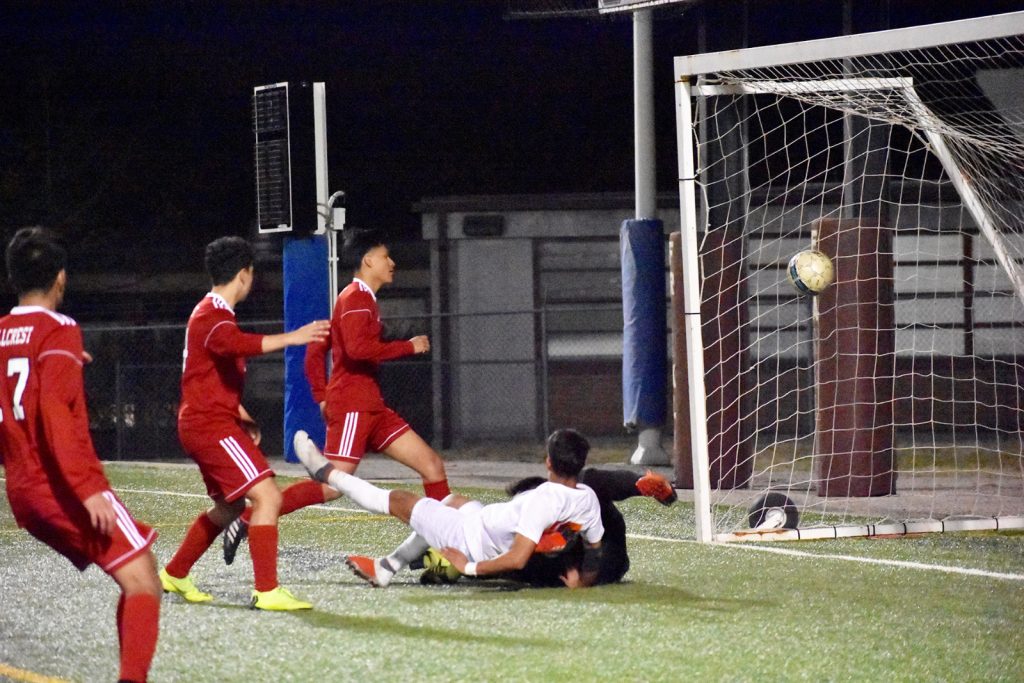 Bryan Coello collides with the goalkeeper but manages to score on the play. 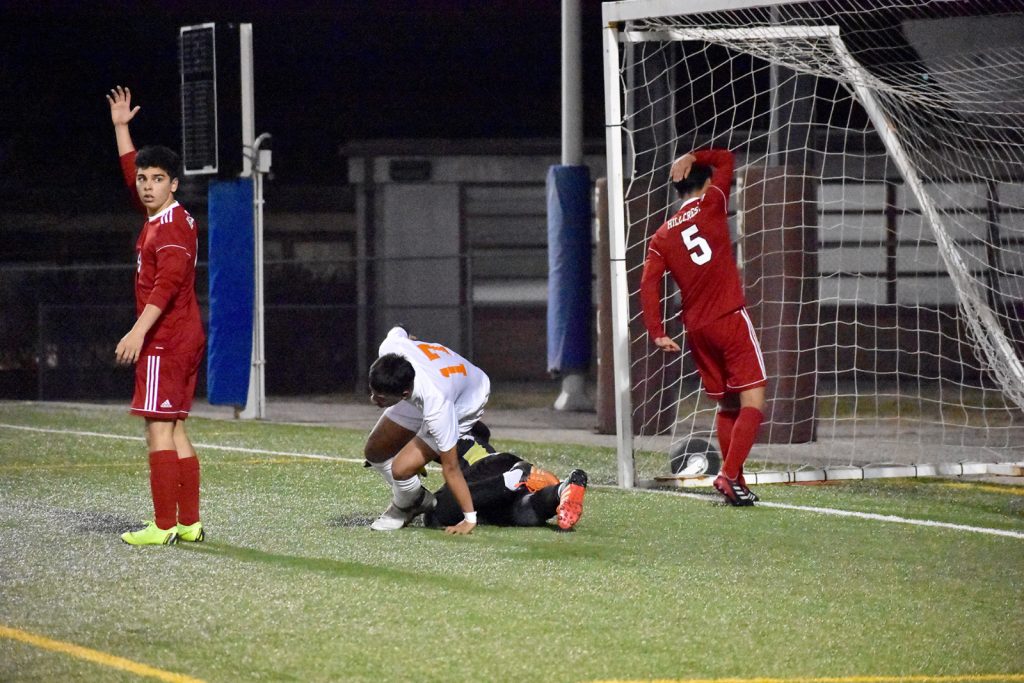 Bryan gets up after his goal gave North Dallas a 3-1 lead. 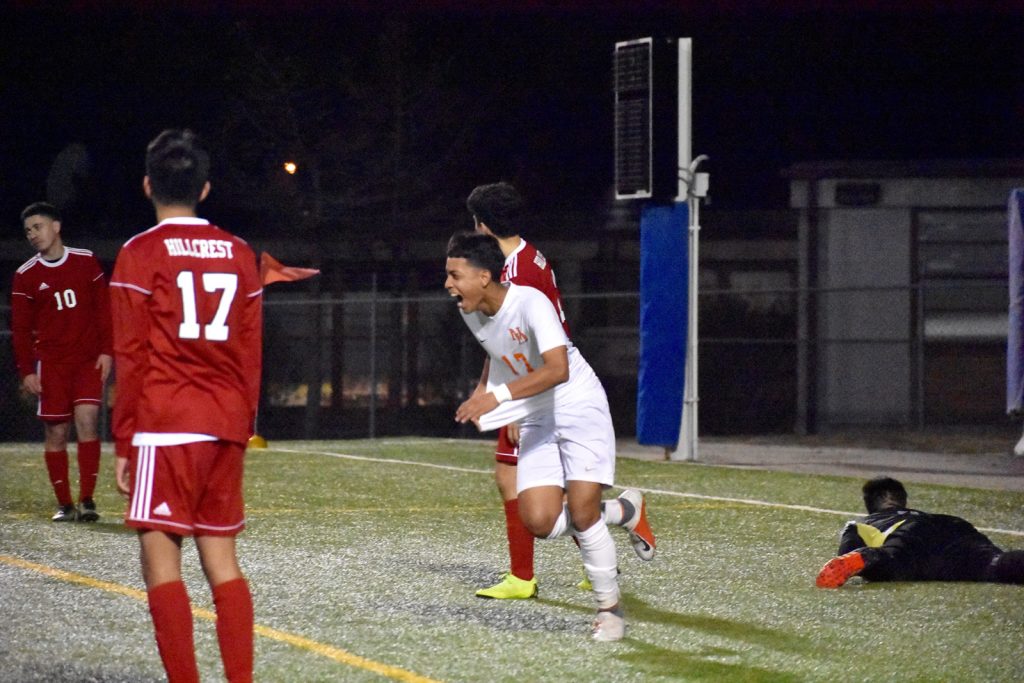 Bryan celebrates his goal against Hillcrest.

During the game, North Dallas captain Sonnie Mathis was all over the field. Emotions were high and there was a sense of urgency. Sonnie wasn’t going to let the Bulldogs lose this game.

North Dallas didn’t lose. Instead, the Bulldogs avenged their only loss of the season with a 4-1 win over the Hillcrest Panthers in a District 11-4A showdown Wednesday night at Franklin Field. Luis Rosales scored two goals, Marco Castro had one goal and Bryan Coello had one goal.

“It was a game changer.  You could tell one thing could lead to another and you could switch as fast as you could snap your fingers,” Sonnie said, describing the quick attacks and long shots by both teams. “We started off good, but we let that one go in and then came back with the four others.”

Hillcrest took an early 1-0 lead with 35 minutes left in the first half, but the Bulldogs weren’t down.

“[It was] more motivation. The game’s not over yet,” Sonnie said about falling behind. “You score one and you never know, you come back with two. You have to stay humble, don’t talk smack, keep your mouth closed and play.”

Celis Ordonez added: “It was a big win. We wanted to win against our rivals because the last game was not right. We wanted to prove that we were better than them and we did today.” 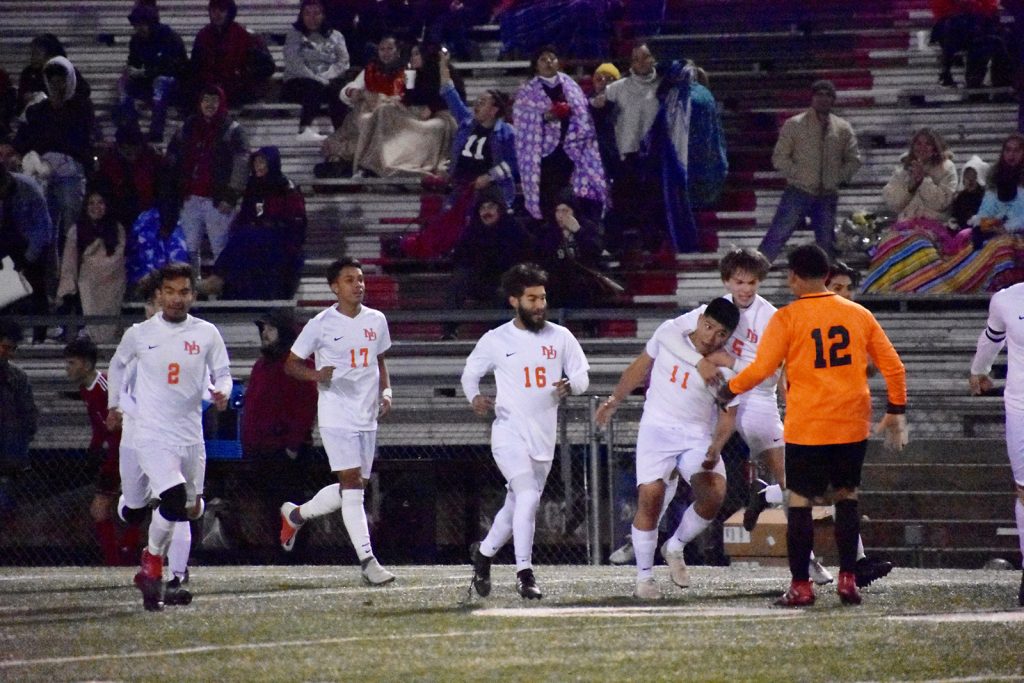 Luis Rosales (11) is mobbed by Sonnie Mathis and teammates after tying the score at 1-1.

“Man, it’s a great feeling,” North Dallas Coach Jonatan Benitez said. “It was a tough game and we knew that from the beginning. The guys did a phenomenal job. We got a difference of plus-3 and that’s what we were looking for. ”

Luis tied the score at 1-1 when he caught up to an errant Hillcrest pass and ran past the Hillcrest goalkeeper to score with nine minutes in the first half. Marco scored on a rebound shot off Jose Luis Valenzuela’s shot  with seven minutes left for a 2-1 North Dallas lead.

“We came together as a team to make the goals,” Luis said. “We hustled to the last minute. My first goal was intense. I was feeling the best. We took the W. That’s the rematch we wanted.”

In the second half, Luis scored on a long shot, and Bryan scored off a throw-in.

“I was looking and I got the ball over there, and I kicked it in the goal,” said Bryan, who was playing on the right side of the goal. 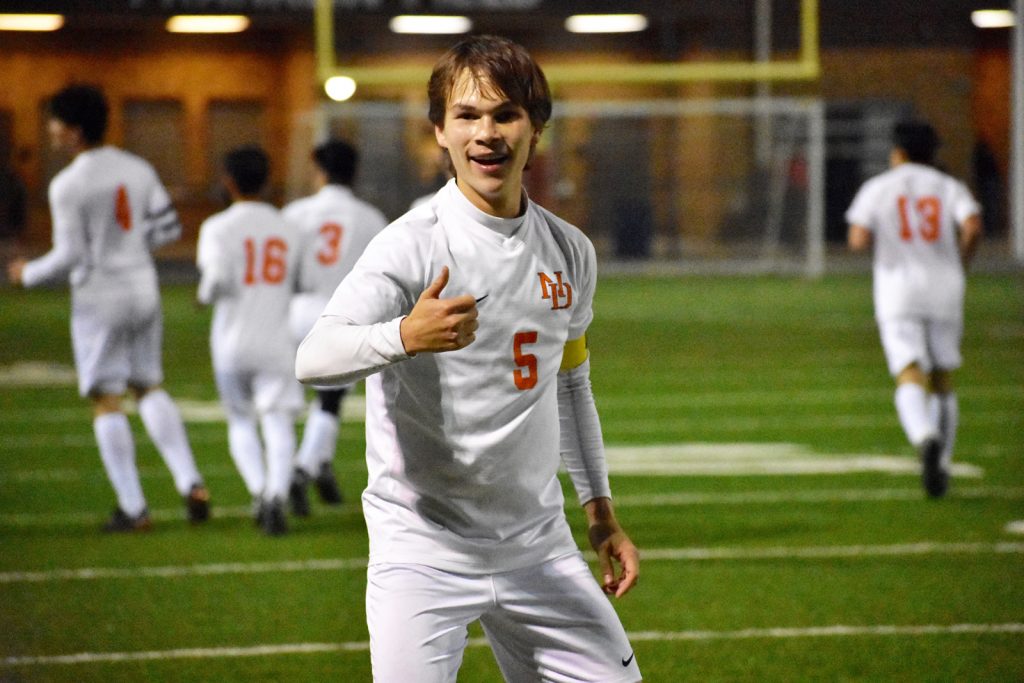 Everything is thumbs-up for North Dallas captain Sonnie Mathis. 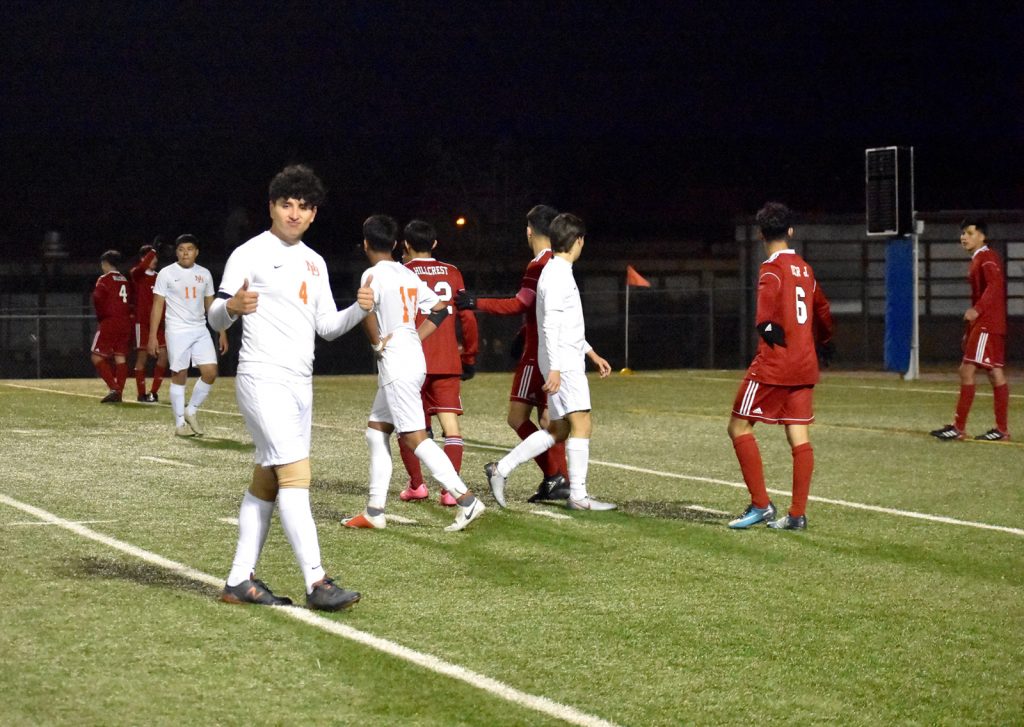 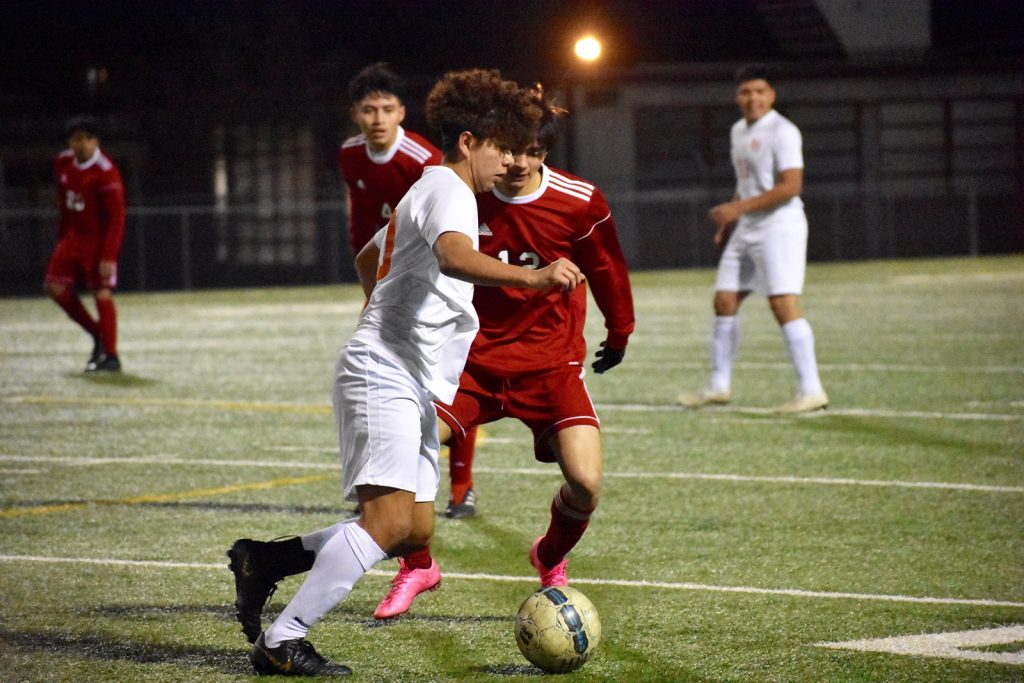 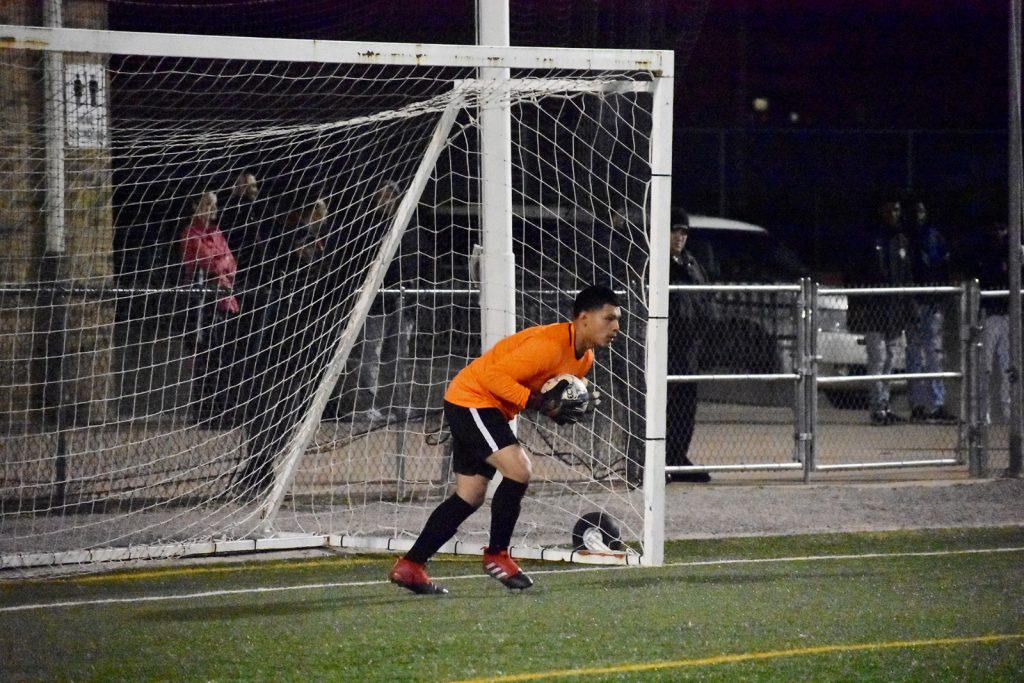 North Dallas goalkeeper Mauro Rincon was busy in the goal against Hillcrest. 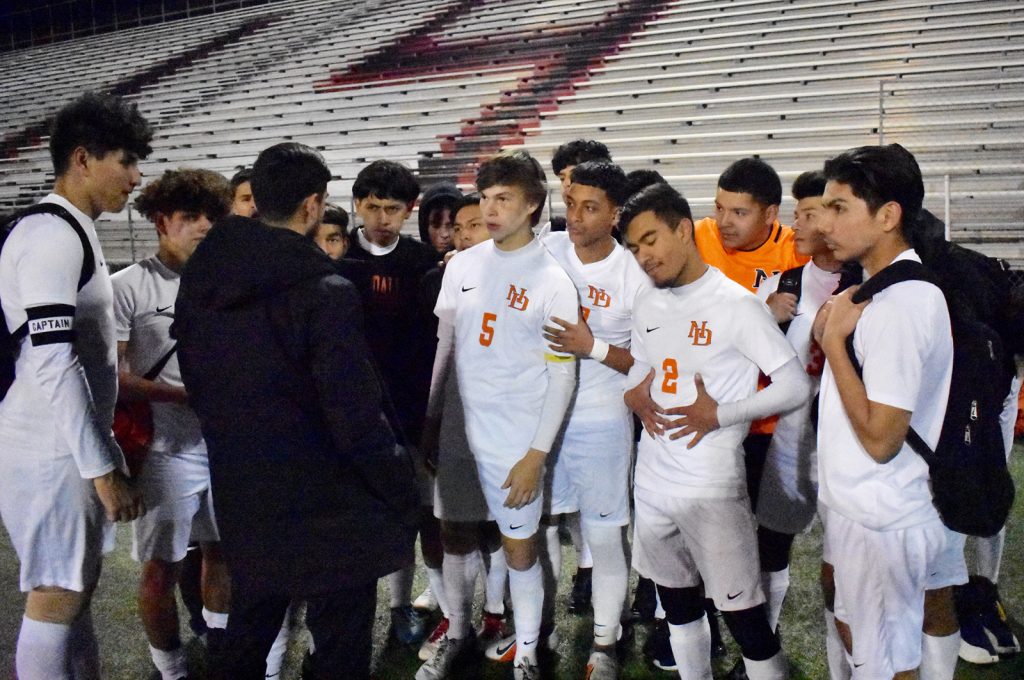 Coach Jonatan Benitez talks to the team after the game.