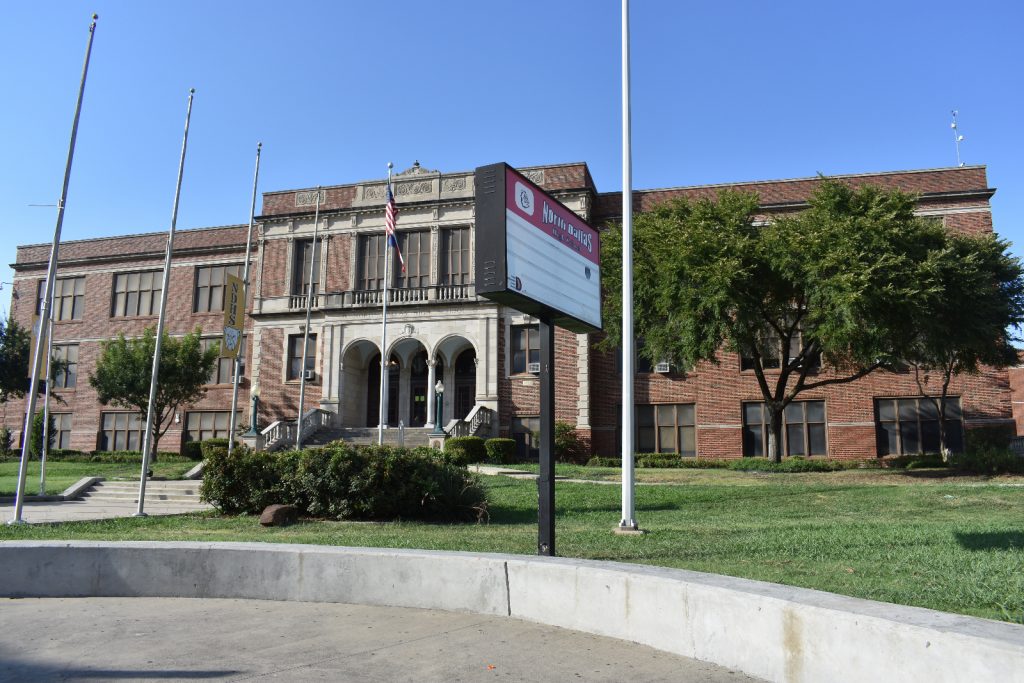 A timetable has not been announced for North Dallas’ renovations to begin but there’s hope it will be completed by 2022.

When Katherine Eska interviewed for the North Dallas principal position, she remembered a conversation that she had with Dallas ISD Superintendent Michael Hinojosa.

“I remember vividly in my interview with the superintendent, he stated this can be a flagship school in our district: Take care of the building and advocate for what the students need,” Eska recalled.

Eska has accomplished that in a huge way, with presentations and conversations that led to $46.5 million in renovations for 97-year-old North Dallas High School. The renovations, which included a competition gym, were added to the DISD bond program. The project was approved by the Dallas ISD school board in December.

“So when I got here, given our population of students and the history of North Dallas, I felt very strongly that students feel as valued as their surroundings,” she said recently. “So I want students, when they walk into North Dallas High School, to understand that they have a place at North Dallas, just like they have a place in West Village or Uptown, or the office buildings that immediately surround us.

“So, I was very passionate about working with the district to do this in collaboration with the right people. Quite frankly, at first, it was just trying to figure out who to talk to and open a line of communication and conversation.  I met with my boss and Dr. [Brian] Lusk, then parties from operations, as well the bond office, and ultimately Mr. [Scott] Layne. Our Trustee [Dustin Marshall] and City Councilman [Mr. Phillip Kingston] were also partners in the conversation.” 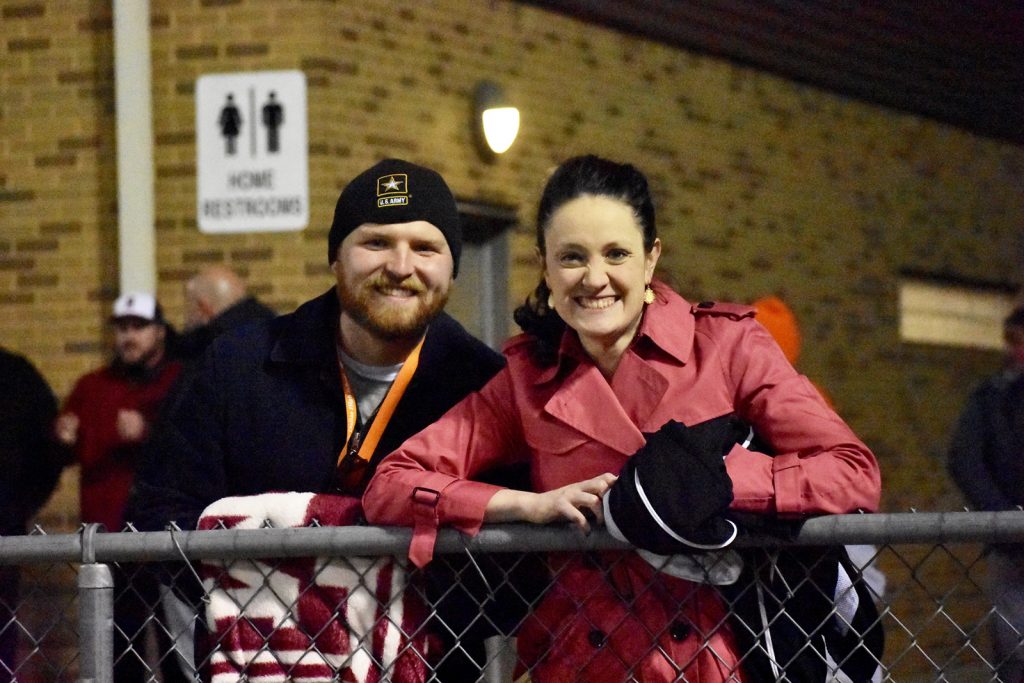 Eska shared that DISD Trustee Dustin Marshall played a pivotal role in getting renovations approved by the Dallas ISD.

“Decisions in our district must be collaborative,” Eska said. “I think I helped keep North Dallas ‘front-burner’ for a lot of people, but Dustin Marshall’s support and work with all Trustees also made this possible, as this portion of the project involves three other high schools.”

Marshall, who knew Eska when she was principal at Kramer Elementary, was impressed with her presentation.

Marshall said the district hired a third-party consulting firm to look at all the schools in the district, and “North Dallas was one of the highest need” on the list. His proposal in the bond program included upgrades to North Dallas and three other high schools — James Madison, Sunset and Bryan Adams. North Dallas’ bond allocation went from $8 million to $46.5 million. 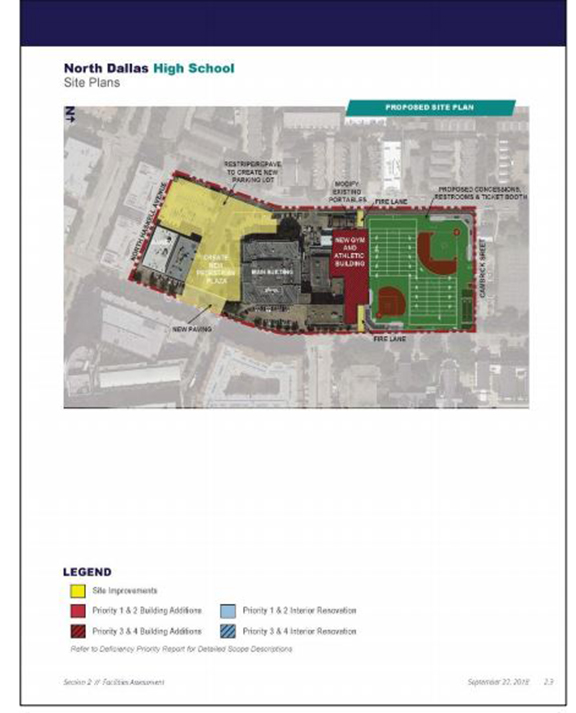 An early image shows the parking lot extension on the Cole Side.

With North Dallas turning 100 in 2022, Marshall said he hopes the renovations will be done by then, but it depends on the construction.

When asked about the closing of Haskell Avenue to create a campus with a courtyard, Marshall said, “Katie created a power-point presentation that she took on a road show to various members of the community. During the process, she showed it to me. It’s what the campus would look like. Now that’s a city issue. I approached [Dallas City Councilman] Philip Kingston and he had a willingness to continue talking. That has not been inked with the city, but it’s pretty likely.”

Eska said the bond project has seemed like a part-time job, but she saw the value for the students.

“Every now and again, it felt like a part-time job on the side, for sure,” she said. “But again I think it was that important to me that our students and families feel valued by their environment. We’re the only school that doesn’t host home games and that’s a huge component of school spirit.

“When you ask our kids what’s the one thing they want most in their high school, that’s to increase school pride. While North Dallas has a lot, I think a renovation like this can pump it up.”

The renovations project will be a learning process for Eska, who graduated with a degree in finance from Notre Dame in 2009 and received a master’s degree in education from Harvard University in 2013.

“I’m opening a new round of questions just to find out how this goes,” she said. “I haven’t been a principal for a bond project, so I’m excited, but the whole thing is a little new to me, for sure.”

Eska said the project is in the design stage, and the architects will have to take the school’s historical standing into consideration.

“I do know, of course, that with our historical marking, there are things that will be paid attention to and protected,” Eska said. “Certainly, I feel like the previous design [created by alumni Frank Meier] was a part of the effort, of course, behind this.  I think we’ll certainly show respect to our history through this process.”

When Eska arrived at North Dallas in July 2017, the school had air conditioning units in some of the windows in front of the school. Those units are gone, and the windows have been upgraded.

“I’ve definitely received awesome support from the district, as I think about the windows, cleaning up the some of the façade, pressure washing, interior lighting, and many other small projects,” Eska said. “I cannot underscore enough of how great our maintenance department is in the district, and how helpful they’ve been.” 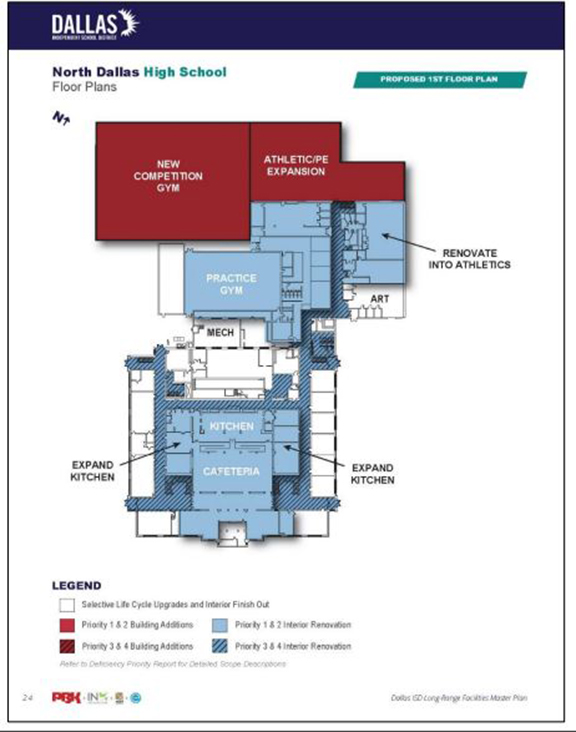 An early image shows the new competition gym and other changes.

When it comes to the new 2,000-seat competition gym, Eska said the back parking lot and portables will most likely go.

“We’re a little bit landlocked here. Some of those portables will be taken out and that area would be used for the gym,” she said. “The plans currently show that the pathway through the back will not be there because the gym will need a significant amount of space.”

“Based on what I’ve seen, it will be a little bit west of the current gym [boys gym], closer to the Cole side. There should be enough width between the fields and the building, without the portables.”

“If I could have my choice about it, I’d love to have a door to the outside and a door into the gym from the inside. Of course, right now we can’t get into the boys gym without coming in from the outside or through a locker room. I would love access for everybody [Students, parents, and community] both from the inside and the outside.”

Other North Dallas principals have come and gone, but it is Eska who’s making a difference. She’s advocating for the students’ needs and looking out for the school. And talking to the right people.

“I think it was a little bit of the right people in the right places at the right time,” she said, with unbelievable community support. “I think I can become passionate about things and continue to ask questions. And then I think the support of School Leadership, our trustee, our community partners, and the city council was huge. The conversation went up through school leadership first within the district. They’ve been really supportive of investing in North Dallas.

“I think this is really an exciting time to be a part of North Dallas. Our kids … I’m excited for their voice to be included in what their school is going to look like because this is where they choose to be for their high school career. We’ll always certainly honor the alumni and the history at North Dallas, but I’m most excited for our current students that they get to be a part of it.” 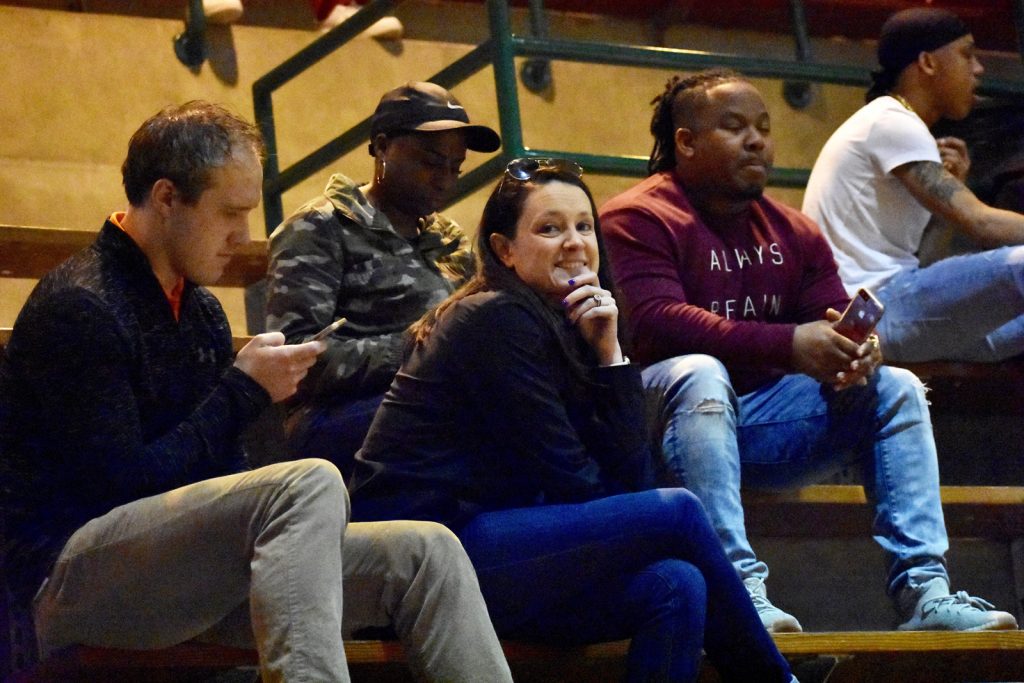 North Dallas Principal Katherine Eska and husband Brent Eska have been very supportive of all the North Dallas athletic teams. Cobb Field House has been the girls and boys basketball teams’ home gym for a number of years, but that will change with the new 2,000-seat competition gym. 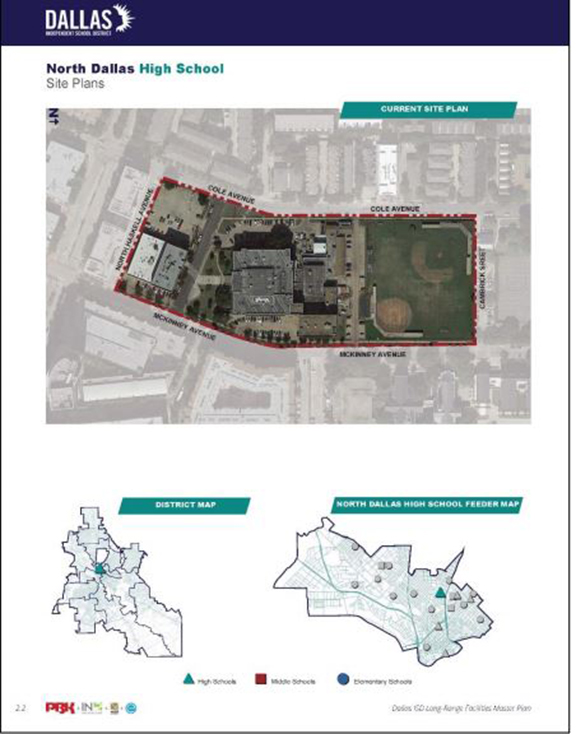 This is an image of the current North Dallas campus.