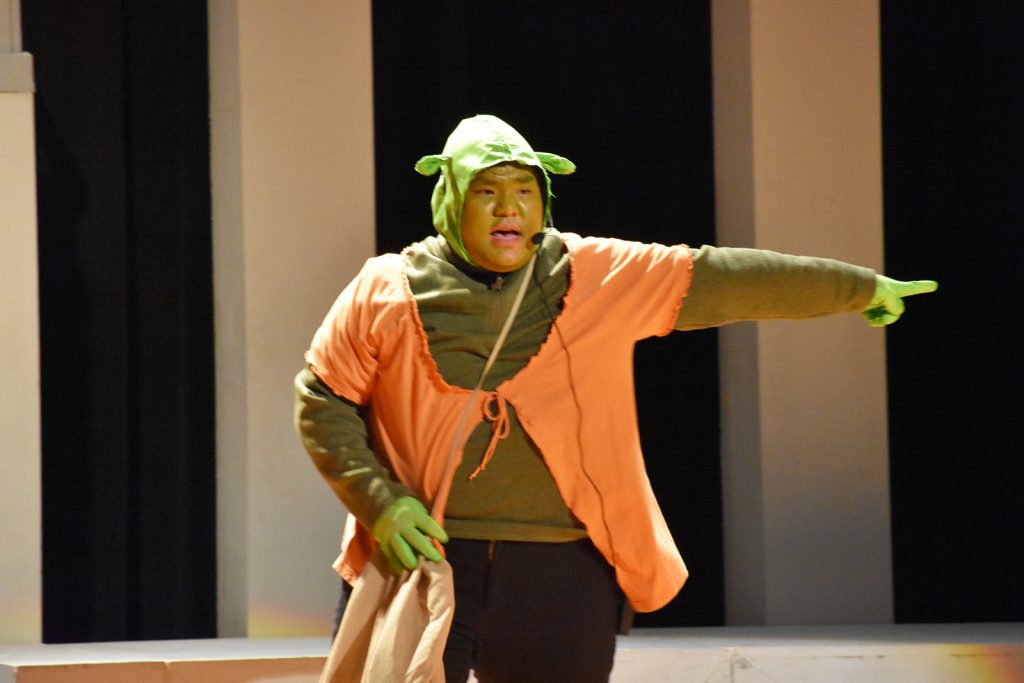 Shrek (Trung Nguyen) wants to be left alone to live in his swamp. 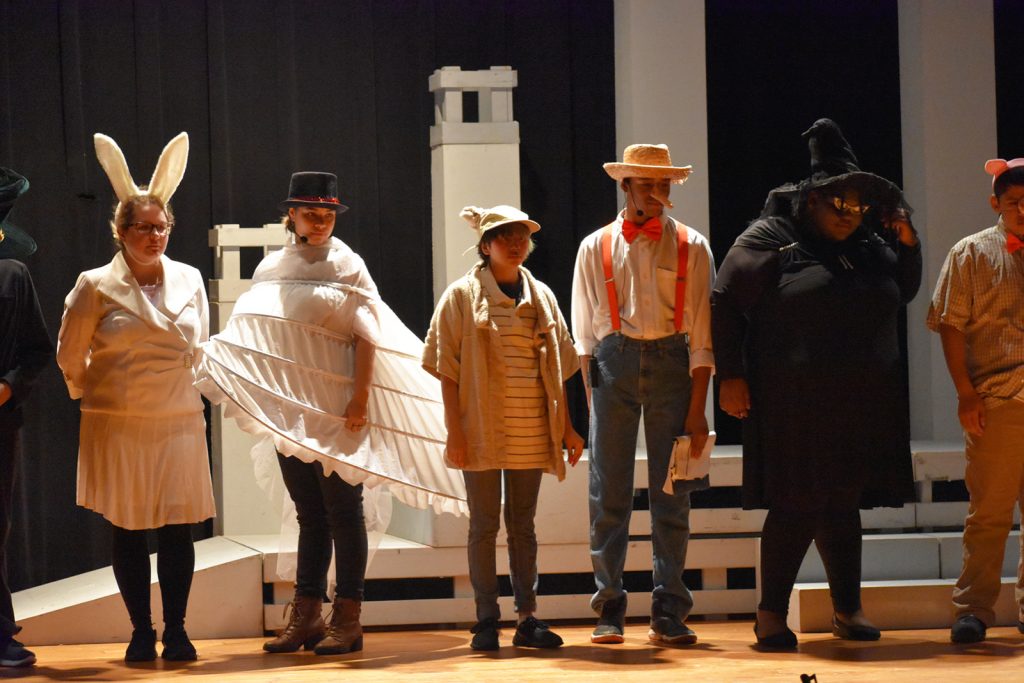 But the cast of characters invade Shrek’s land. 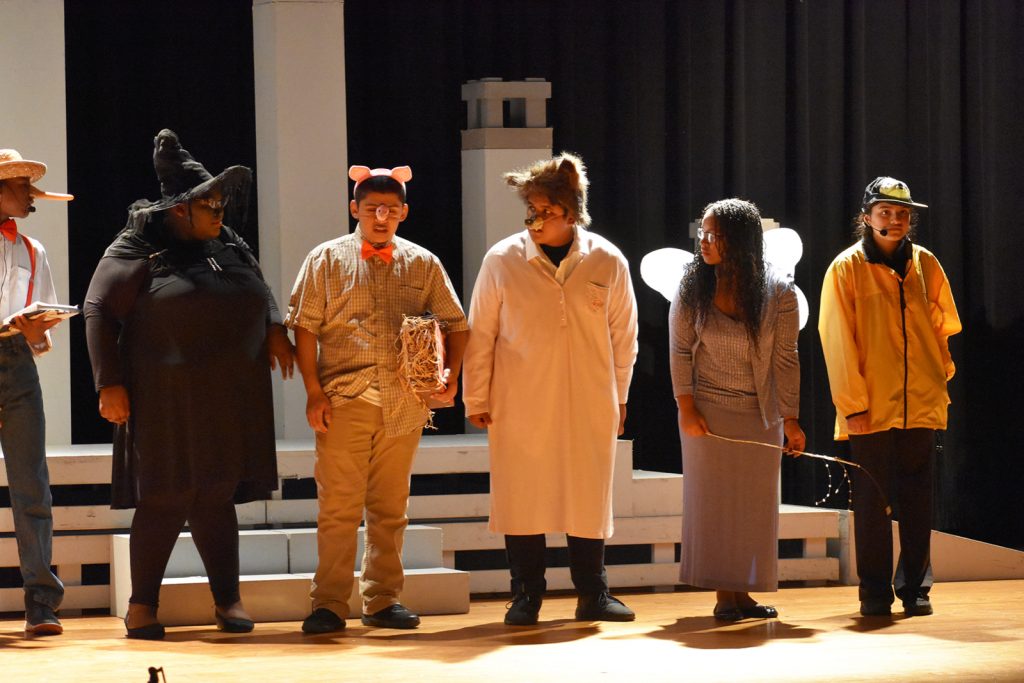 And he must go talk to to Lord Farquaad to help them. 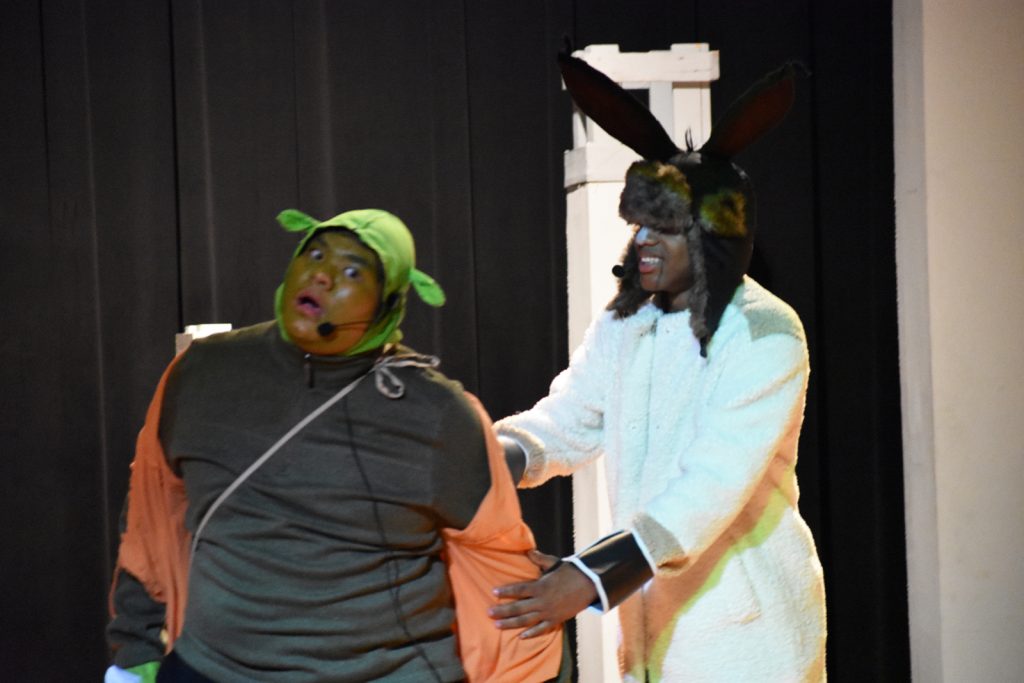 The play — “Shrel the Musical” — was over and the cast members were celebrating and visiting with family and friends in the North Dallas auditorium.

Then Donkey, played by Daniel Reagler, as he had been doing the previous two hours, comes up onstage and says, “Why is everyone still here? The play is over.”

“Shut up, Donkey,” yells Shrek, played by Trung Nguyen, as everybody bursts into laughter.

Everybody seemed to have a good time despite the miscues in this popular children’s production by the North Dallas theater department Friday night.

“I’m very proud of the students. They had some challenges along the way, but that just goes with education,” said Lisa Winslett Tolliver, the director, choreographer and music director. “But they did a great job, and they worked together. And I saw how they came together as one, and encouraged each other. I’m very grateful for the opportunity to work with the North Dallas kids. ”

The play opens with a younger Shrek being sent out into the world by his parents. He finds some swamp land to live until a cast of characters invades his land. He sets out to talk to Lord Farquaad (Enrique Perz) on their behalf, and meets Donkey (Daniel Reagler) along the way. After meeting Lord Farquaad, he’s given the  task of rescuing Princess Fiona (Gisselle Gutierrez) and taking her back.

“It was great. Yeah, we pulled it off,” said Trung, who dressed in green as Shrek. “It was nice. We had a few hiccups but it was all right, we handled it.”

“It was really, really rough,”Gisselle said about the play. “I tried my hardest to put on a show, and it actually came through.”

Gisselle’s singing stood out, and her interaction with Trung was outstanding. Trung’s banter with Daniel (Donkey) was also very good. Donkey kept the crowd laughing throughout the play — and even after the play was over. 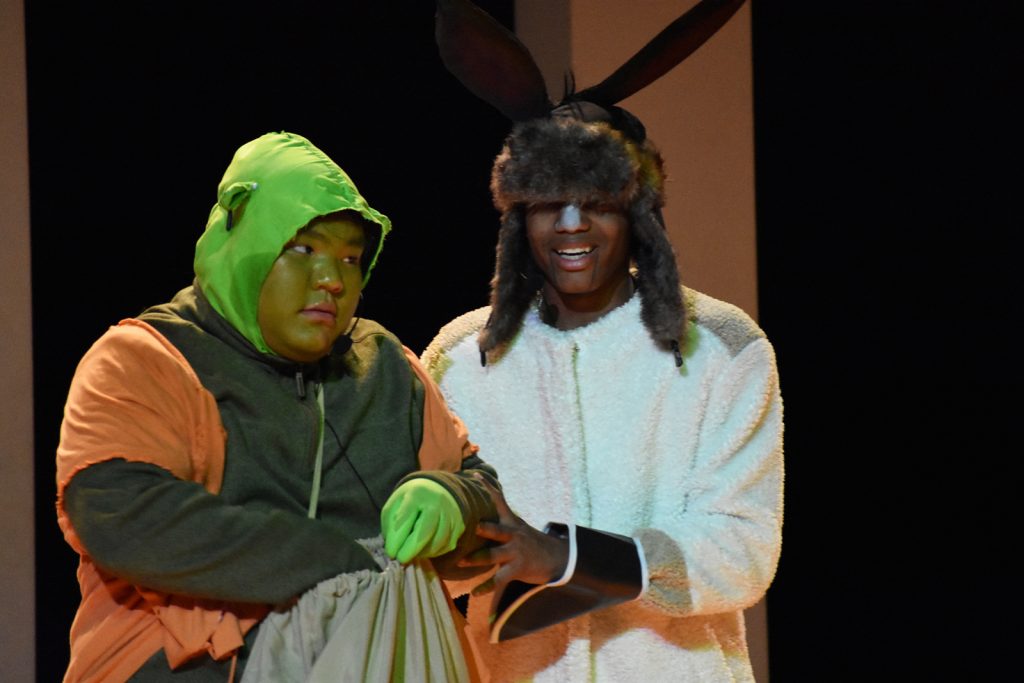 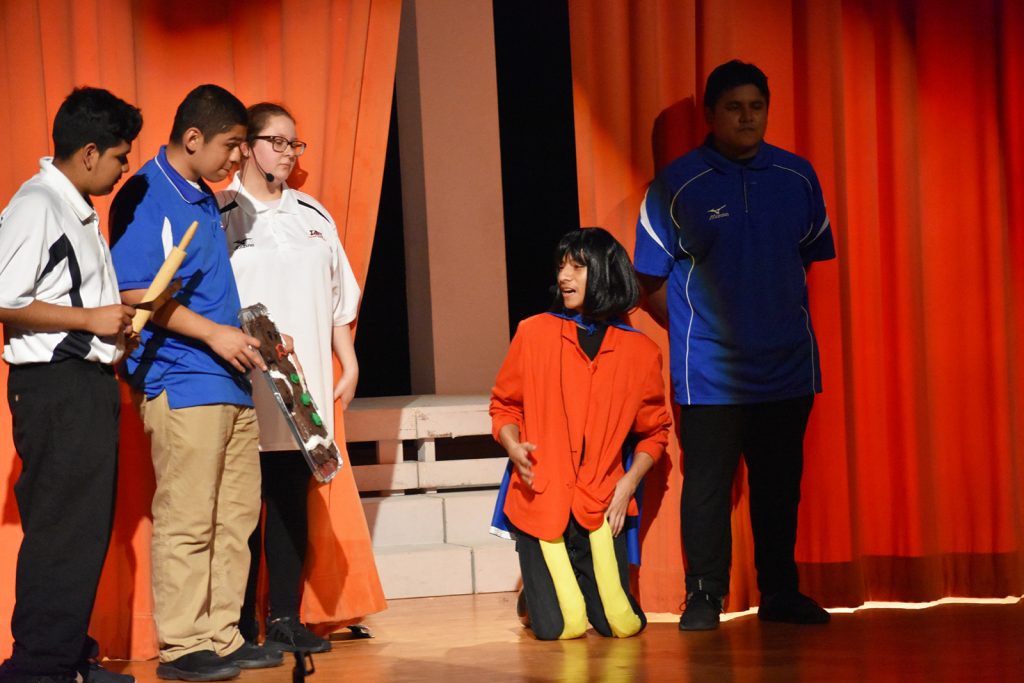 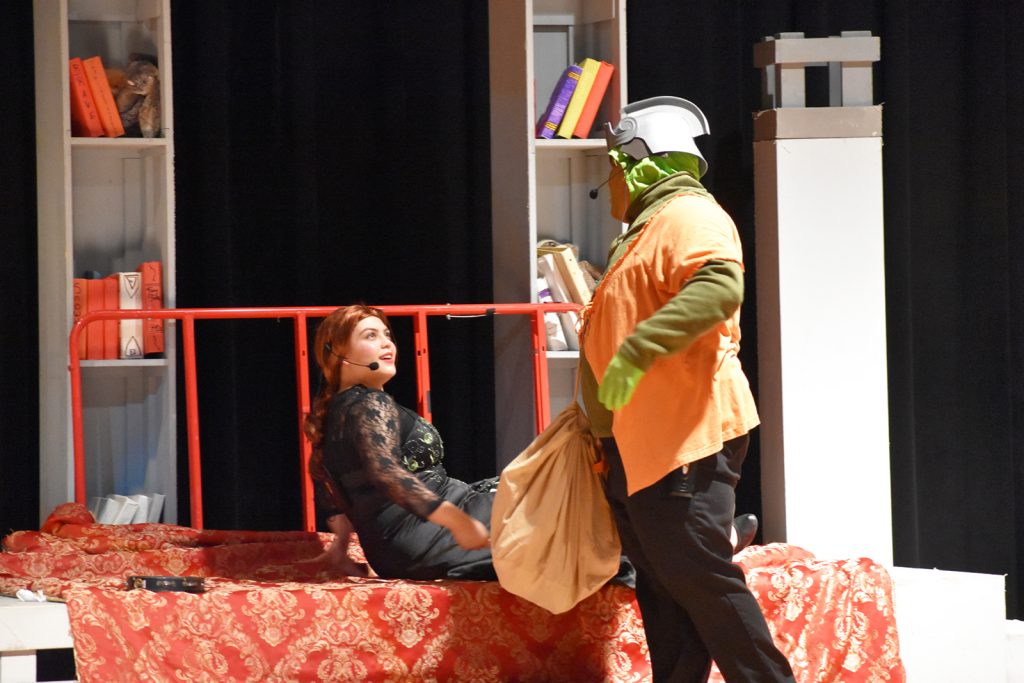 Shrek (Trung) meets Princess Fiona (Gisselle Gutierrez), and he’s there to rescue her. 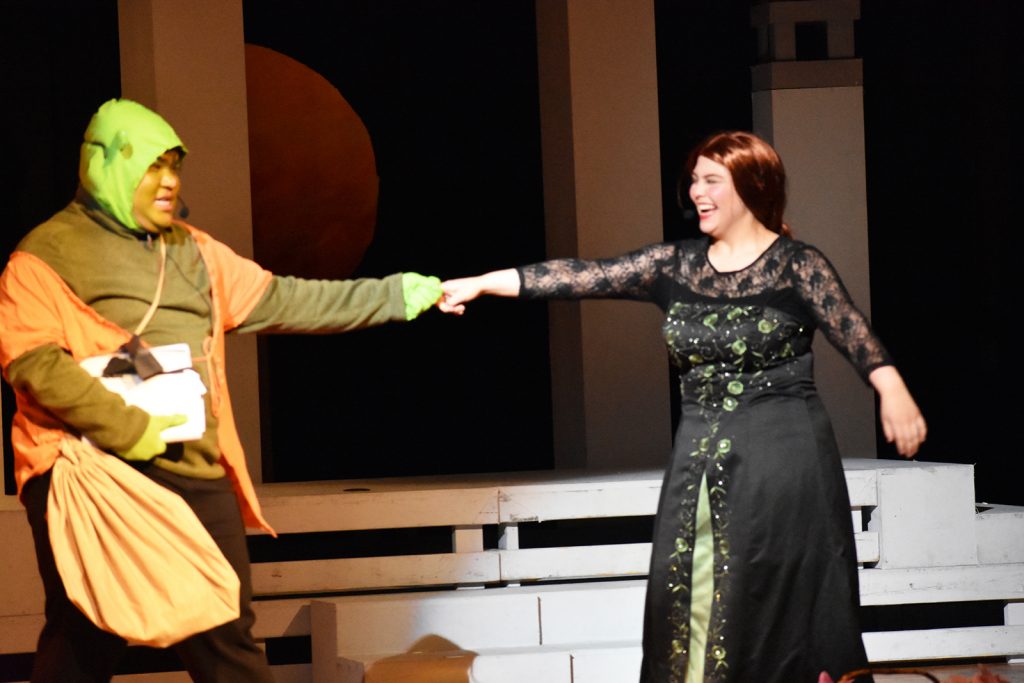 Shrek (Trung) and Princess Fiona (Gisselle) hit it off as he pulls her finger. 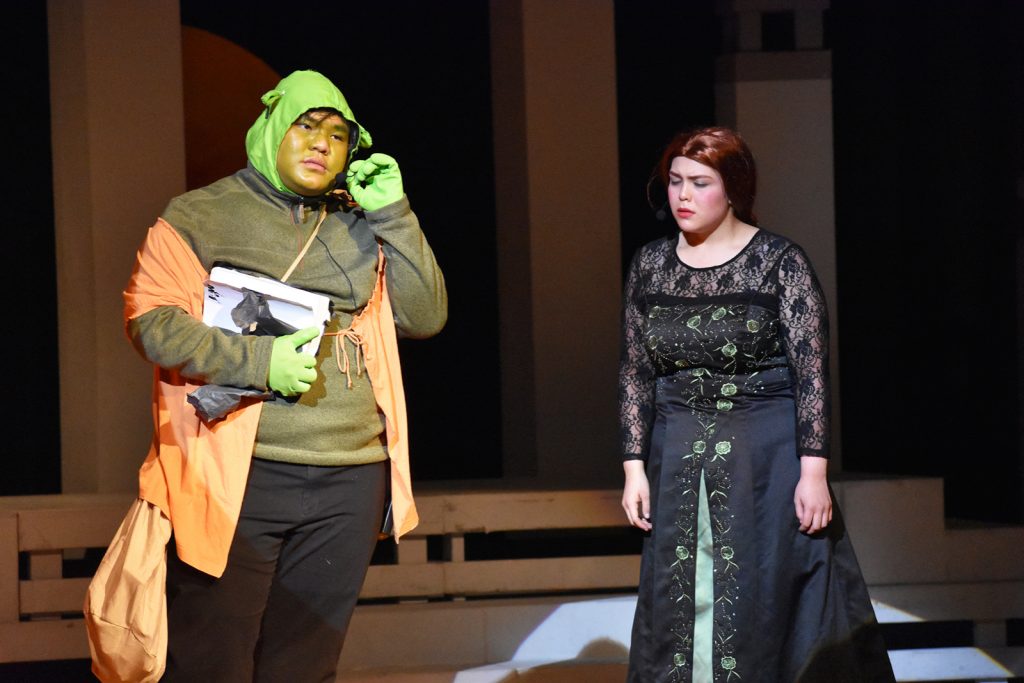 Princess Fiona (Gisselle) talks about meeting her true love but Shrek (Trung) isn’t so sure. 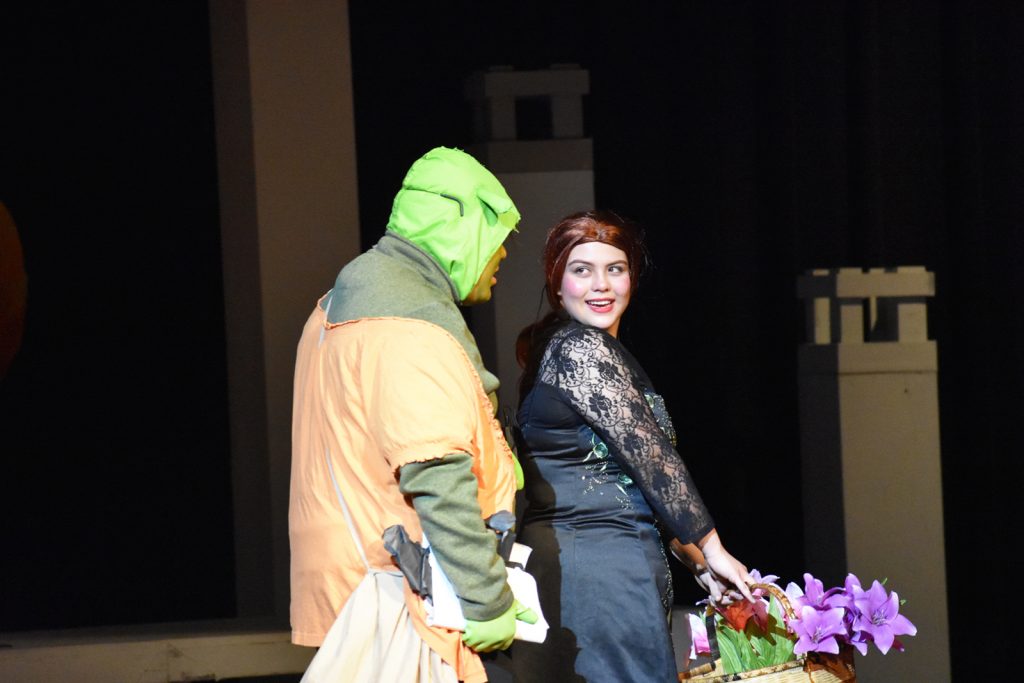 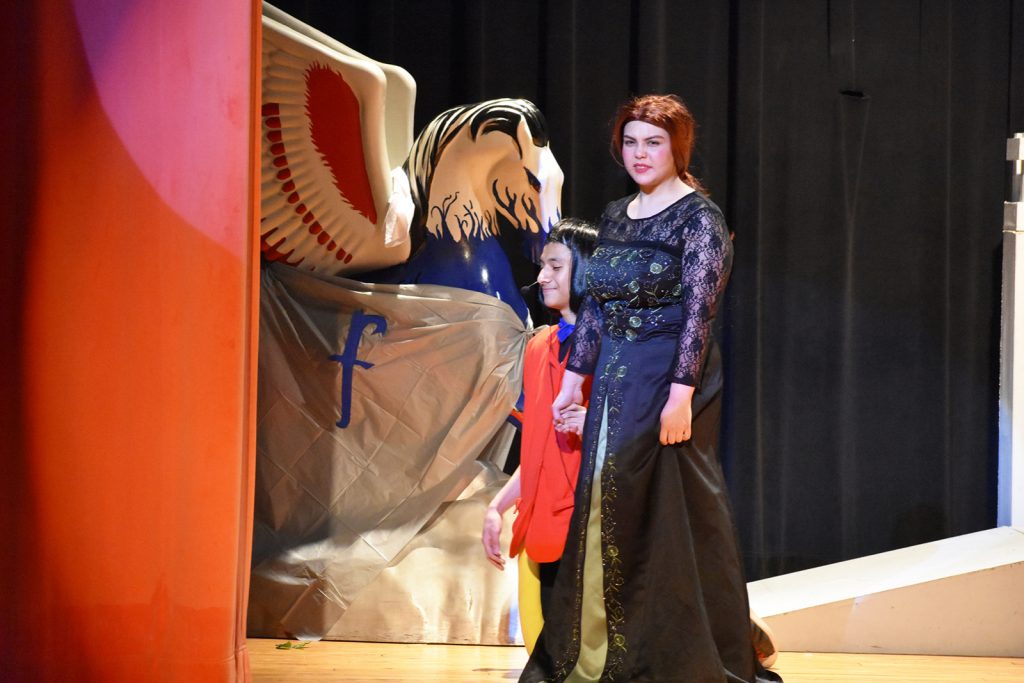 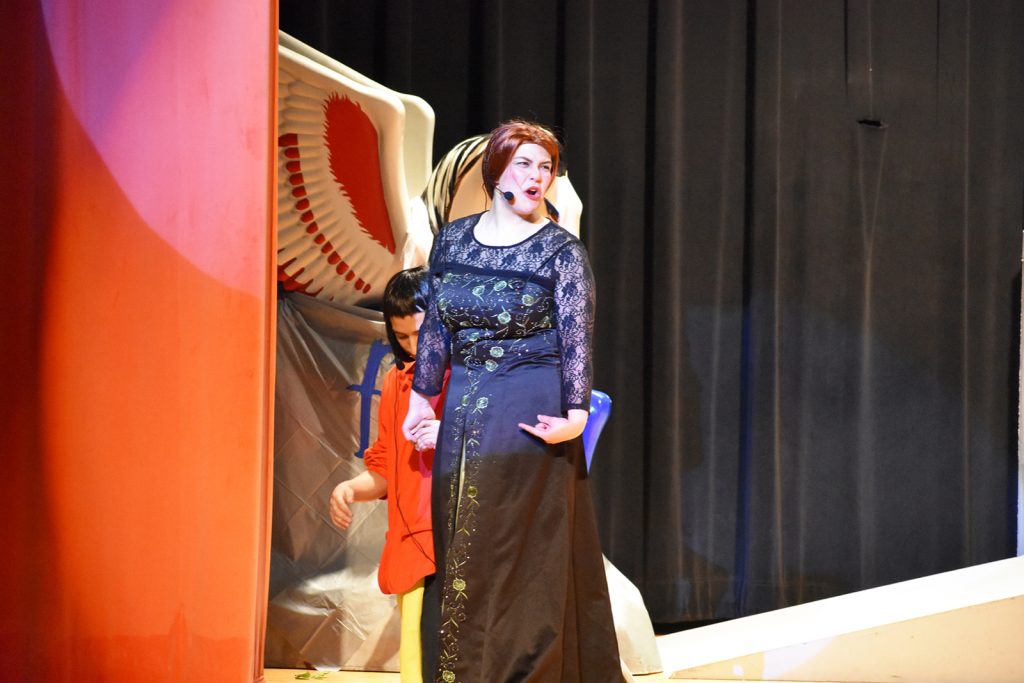 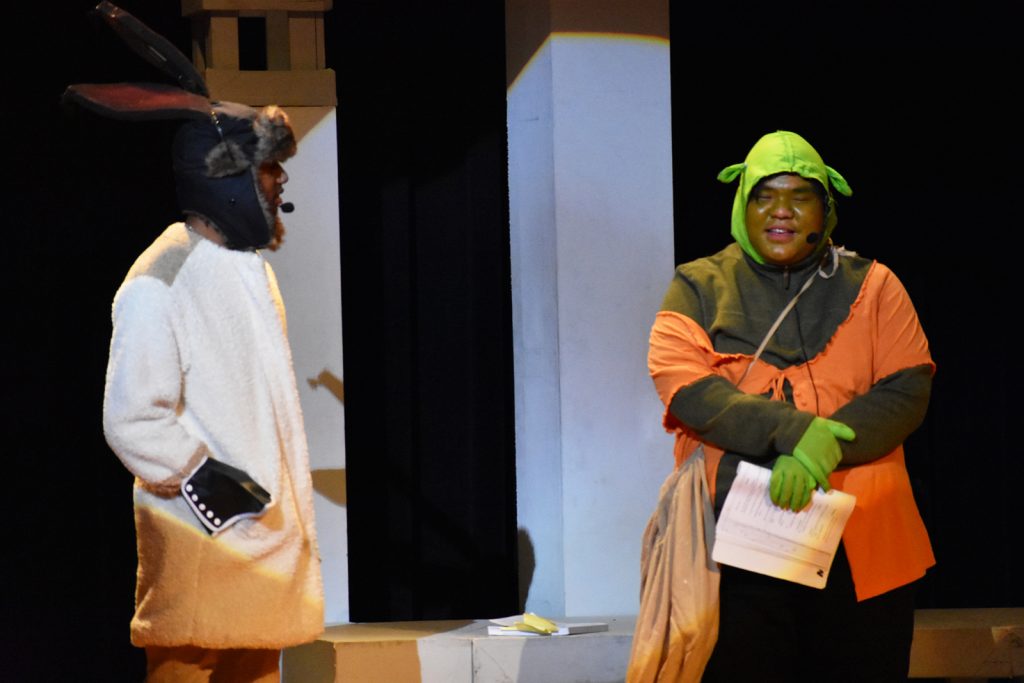 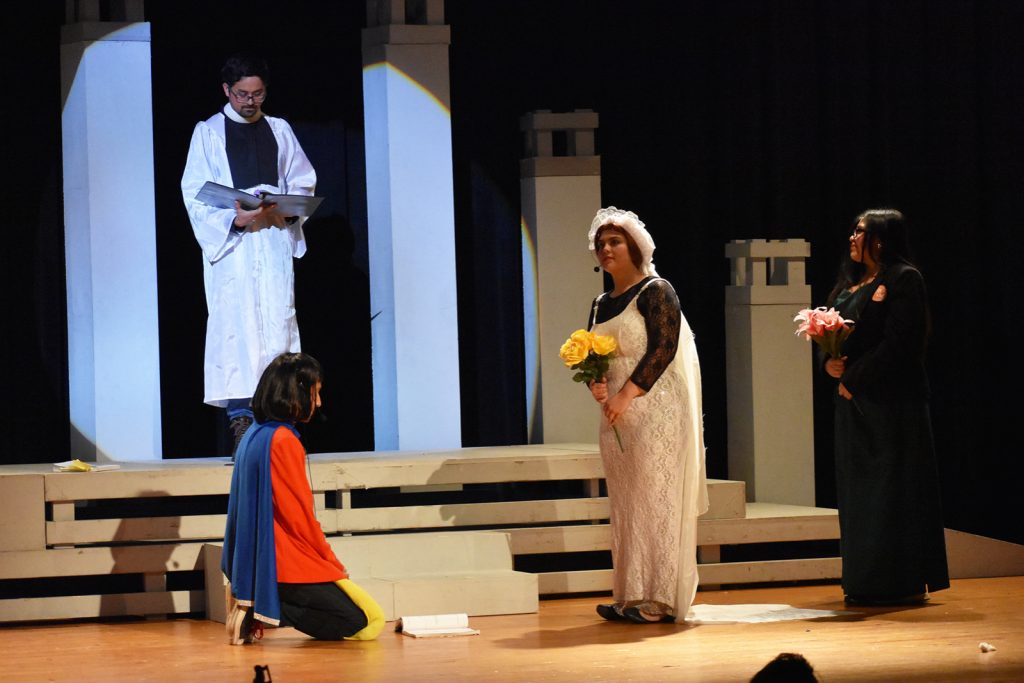 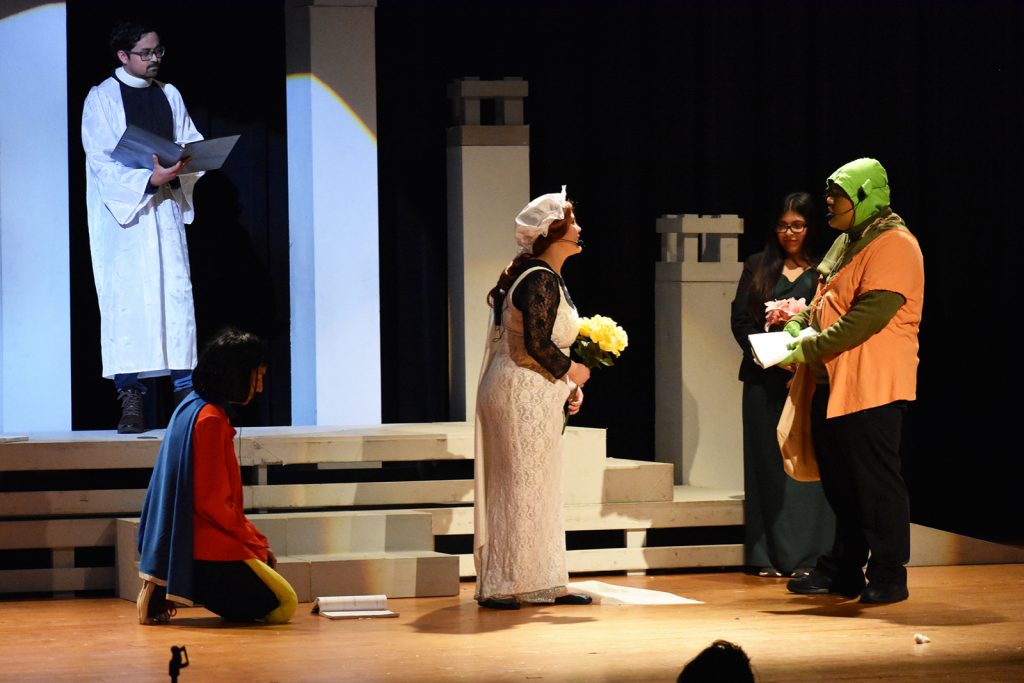 But Shrek (Trung) interrups the wedding. 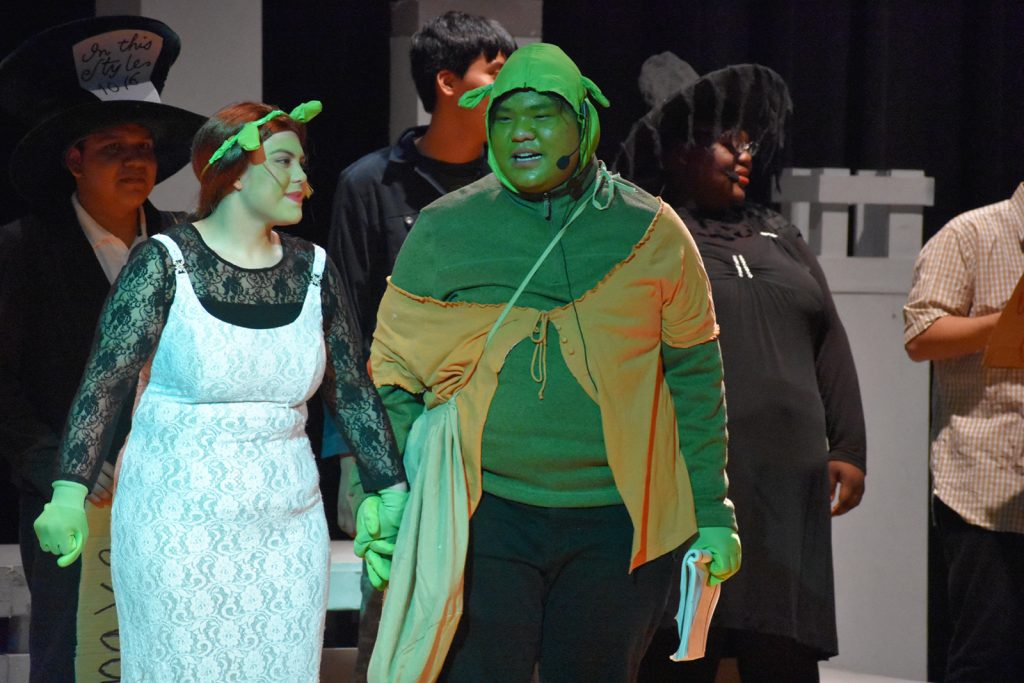 In the end, Princess Fiona (Gisselle) and Shrek (Trung) are together. 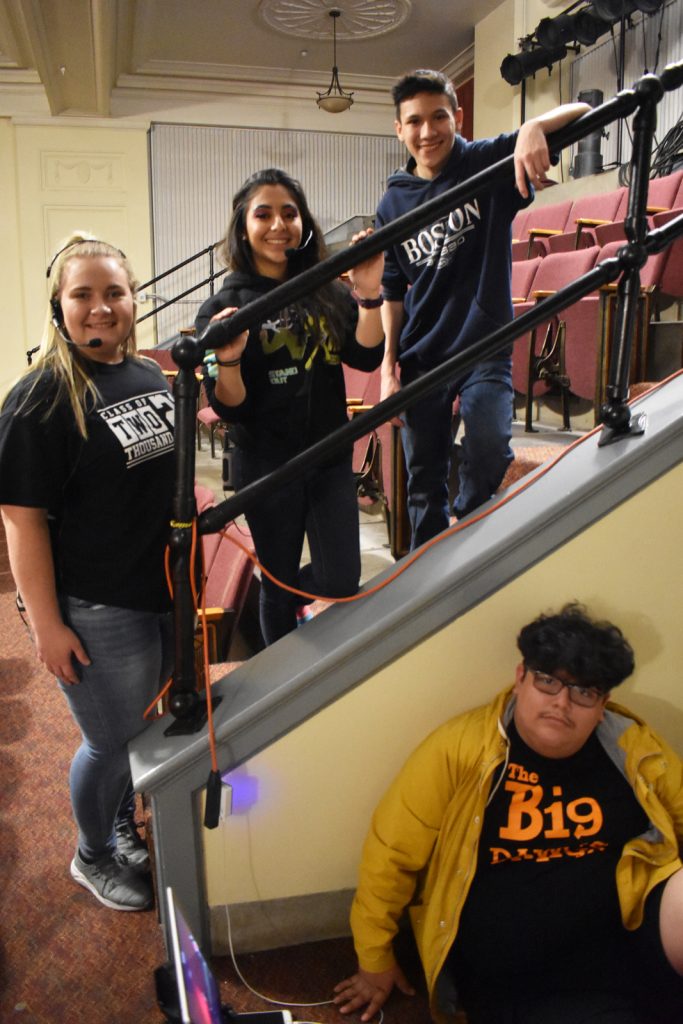 The students handled the lighting for “Shrek the Musical.” 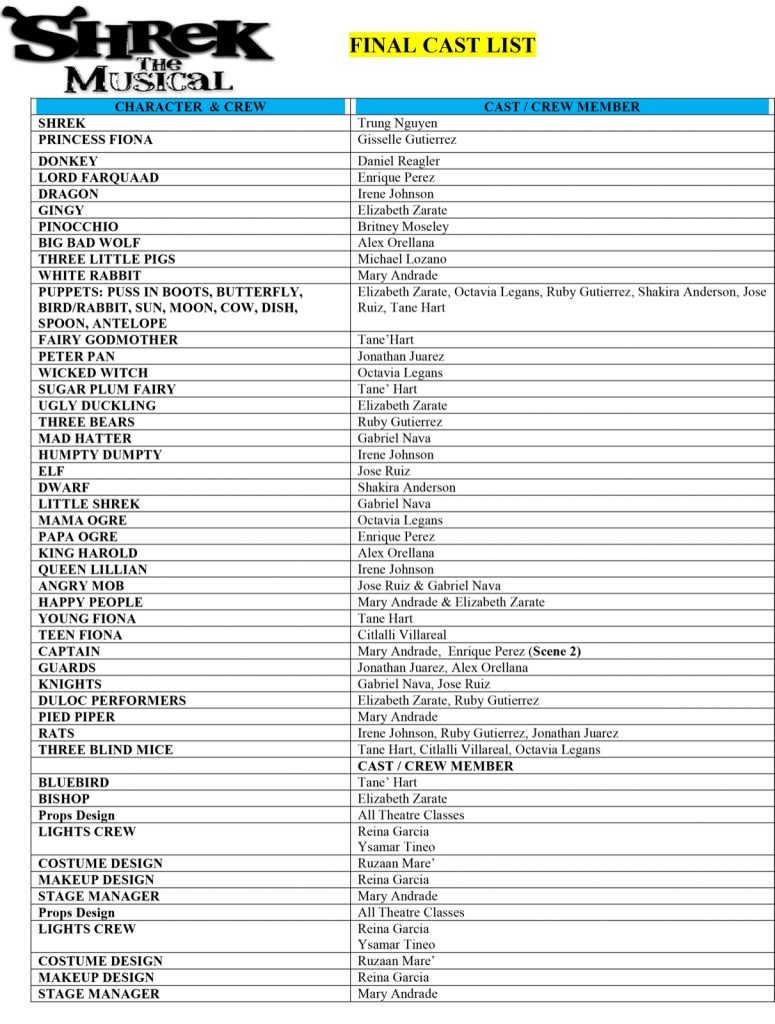