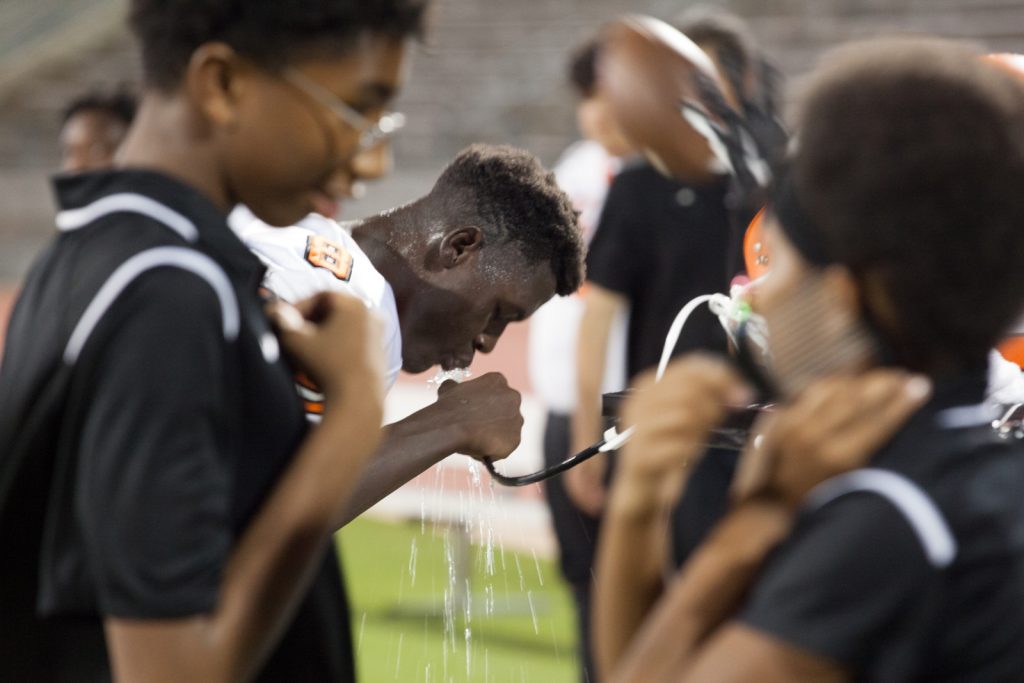 Mohammed Bility (back) takes a drink during a break in the football game.  (Photo by Terry Wester)

If you look at the history of the NFL, some of the great ones played football but also competed in track and field. For example, Cowboys WR Bob Hayes (sprinter),  49ers WR Marquise Goodwin (long jumper), Redskins RB Adrian Peterson (sprinter) and Ravens QB Robert Griffin (hurdles) are among the players who excelled in track and had outstanding NFL careers.

Could North Dallas sophomore Mohammed Bility be added to that list one day?

While only a sophomore, Mohammed, a law magnet student at Townview,  plays cornerback and receiver for the Bulldogs. He had three interceptions this season. He should be one of the top players next season. In track and field, he finished second  in the 110 hurdles and fifth in the 300 hurdles at the District 12-4 meet last season.

“He started off the year kinda slow. His athleticism is really strong,” said defensive backs coach Desiree Allen. “I always knew, because I had him on JV, I know he’s capable of. So I know he’s going to be a contender by the time he’s a junior next year. He’s pretty young. He just turned 15, only a sophomore.

“Track is going to make him even better. He’s a hurdler. He went to regionals last year, I believe. If he continues with that and gets a little bit more muscle on him, he’s going to be nasty. But he’s getting there.”

Mohammed, who turned 15 in September, said recently that he’s started working out and preparing for the upcoming season.

“Everything is looking great. Yesterday,  we ran like a mile and a half,” Mohammed said. “And after we came back, we lifted. It was a hard workout. I was gassed. It was crazy but I hadn’t run in a while. I hadn’t run since summer track.”

Mohammed said he feels good about the upcoming track and field season. Besides the hurdles, he hopes to compete in the relay events.

“I feel good about my individual races and our team races,” he said. “I feel great about the hurdles. Last year, I was only a freshman and there were two juniors and two seniors, so they’re gone. It’s my race to lose.”

Mohammed took a few minutes to talk about football and track and field:

Q. What events do you run in track?

A. I like the 300 [hurdles]. The 300 helps overall with all my other distances. I would probably say the 110 [is my favorite] because it goes by faster. But which one I’m better at, I don’t really know. During summer track, I run the 400 hurdles, which I got third at nationals. I was going to run the 100 but I missed that event.”

Q. What do you want to say about track workouts?

A. It’s the hardest most rigorous workout of any sport.

Q. How was your football season?

A. “It’s going fine. It’s been ups and downs. But overall, we have to do better. Next year is going to be a new and different season. I’ll have an even bigger role than I have now. I look forward to it. The team behaves as the best players behave and although I’m a good player, I’m not a senior.  So I don’t have authority. I have to wait until I become a junior or senior.”

Q. Tell us about your interceptions?

A. I had one against Carter. Basically, No. 2, he ran an out and up. Kinda like a wheel route, and so my man he ran a slant. So, I guess they thought I would take the slant but nobody would take the vertical. I saw him running the backside so I took him. … The other one against Wilmer-Hutchins, I was just running.”

After making the interception, the receiver picked up Mohammed and threw him to the ground. Was there a penalty?

“It’s supposed to be.  You can’t do that. But I got up so fast. I was just dancing around. I was just happy to get the interception.” 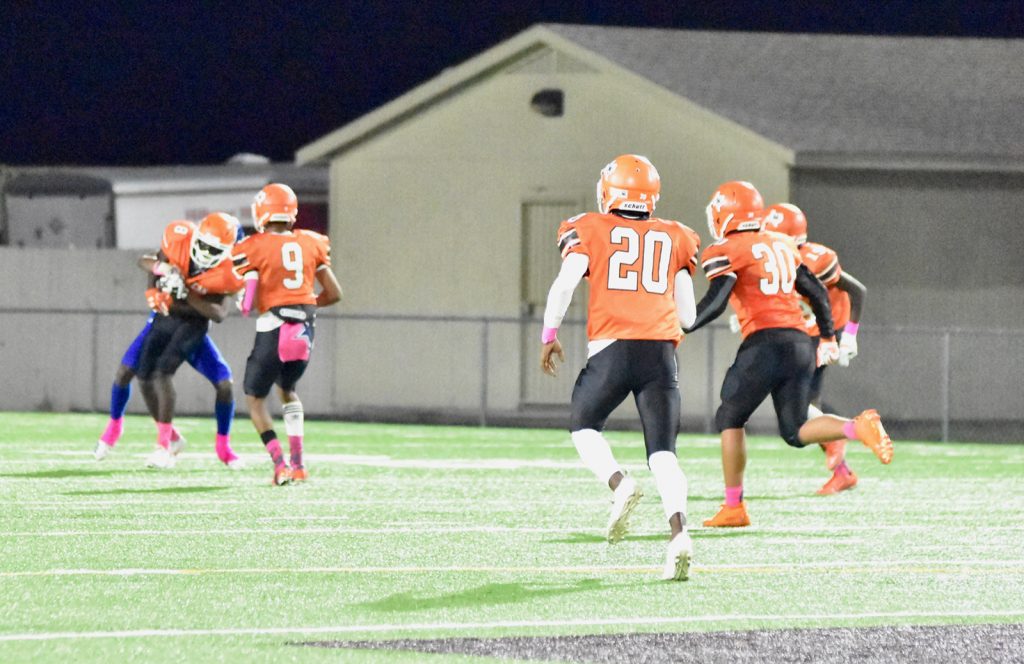 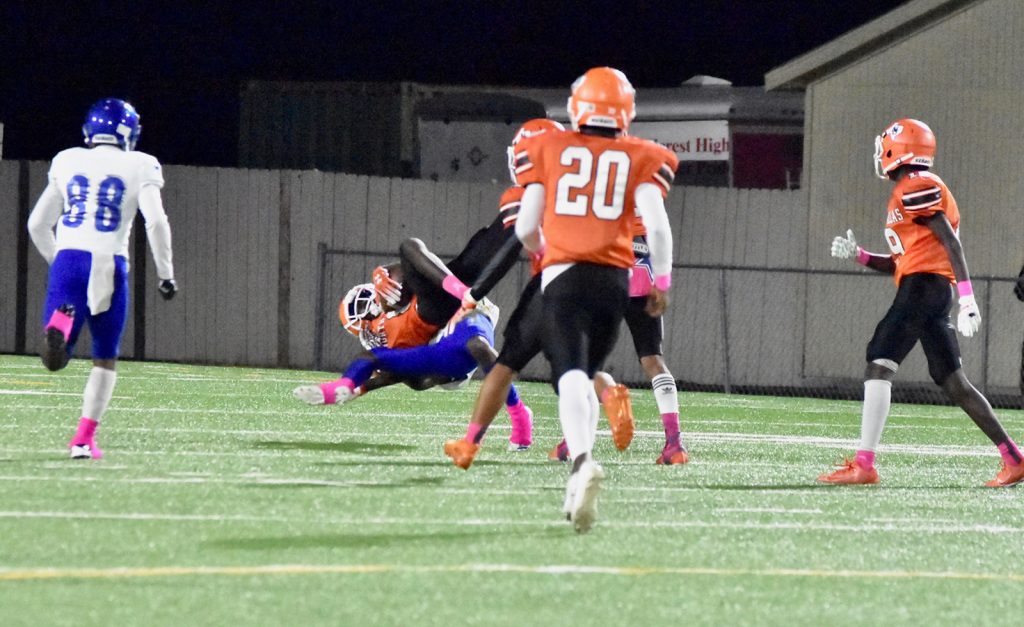 Mohammed is then dropped after his interception. 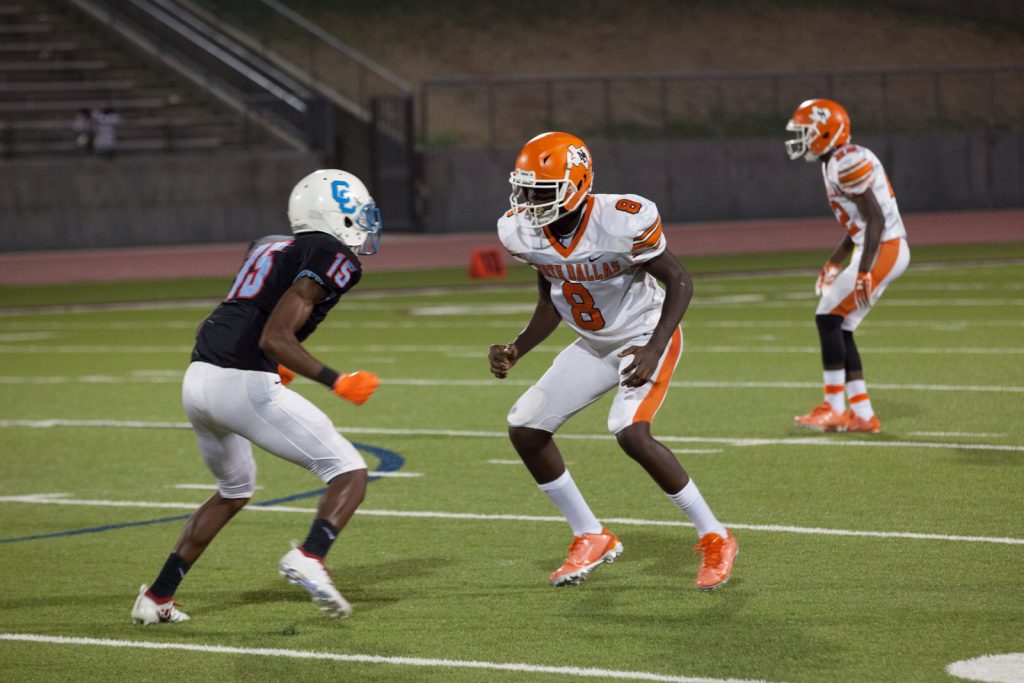 Mohammed Bility (8) goes after the Carter receiver but a blocker is in the way. 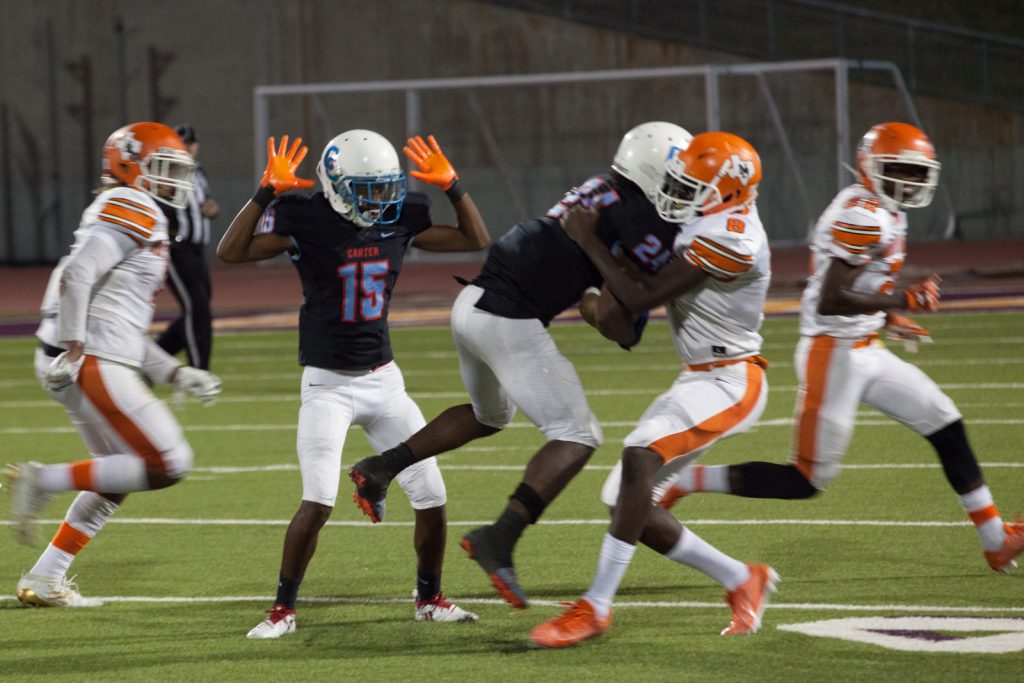 Mohammed Bility (8) wraps up the receiver after slipping past the blocker. 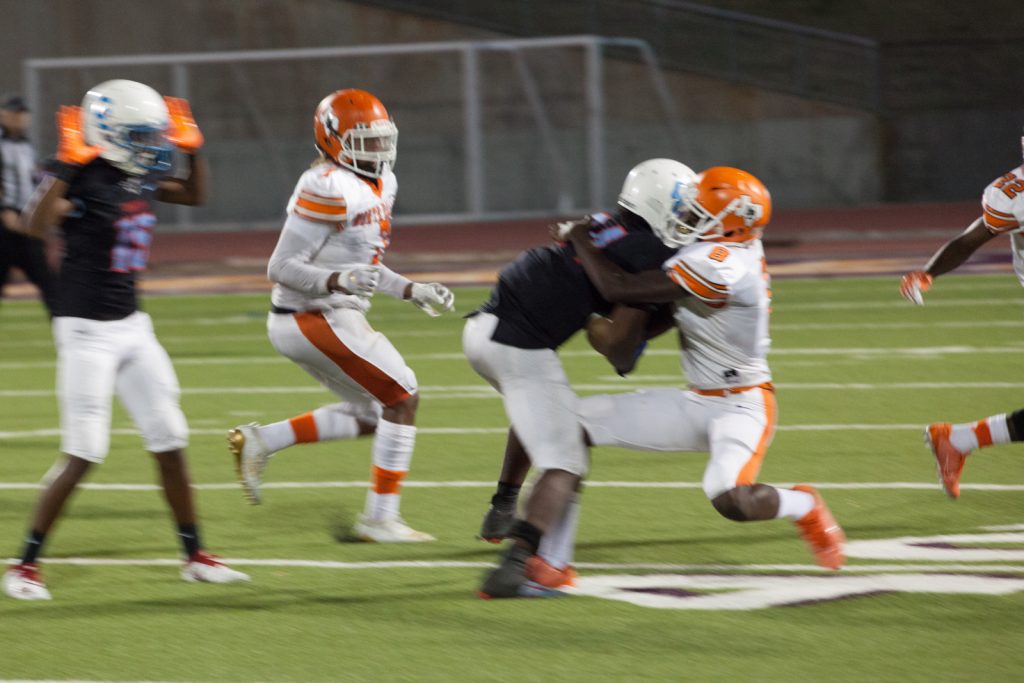 Mohammed Bility (8) holds on and drops the receiver. 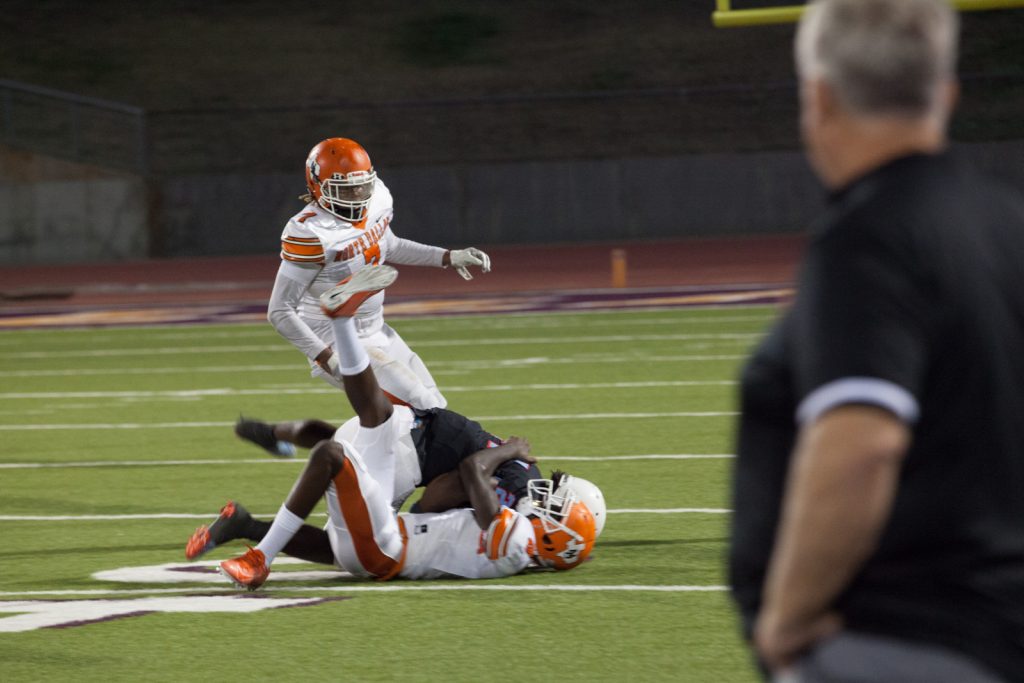 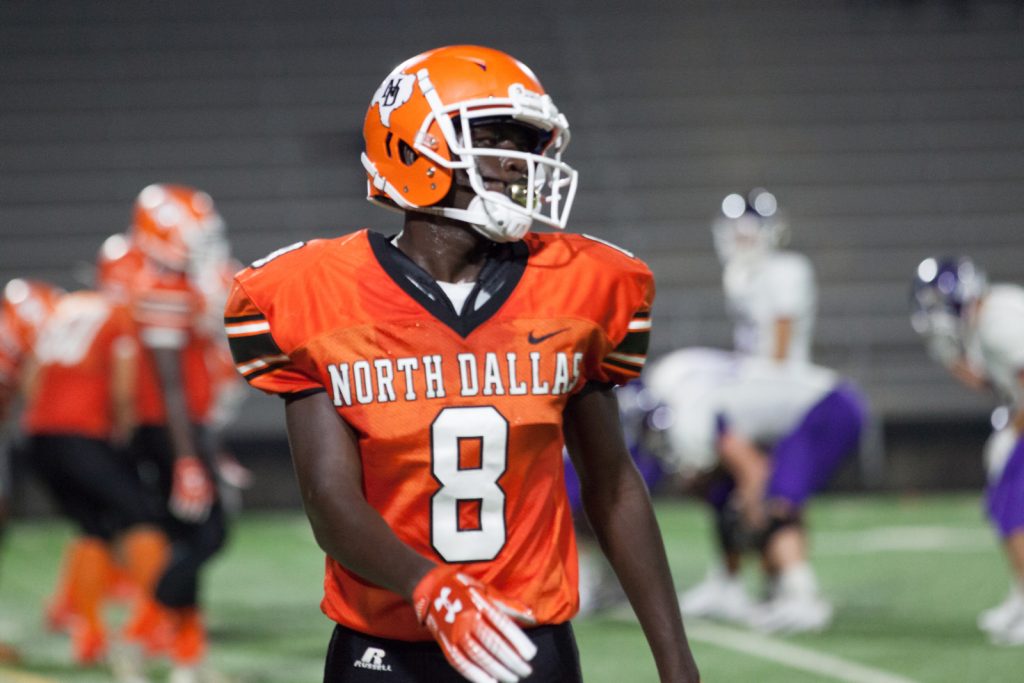 Mohammed Bility will compete in the hurdles during track and field season. (Photo by Terry Wester) 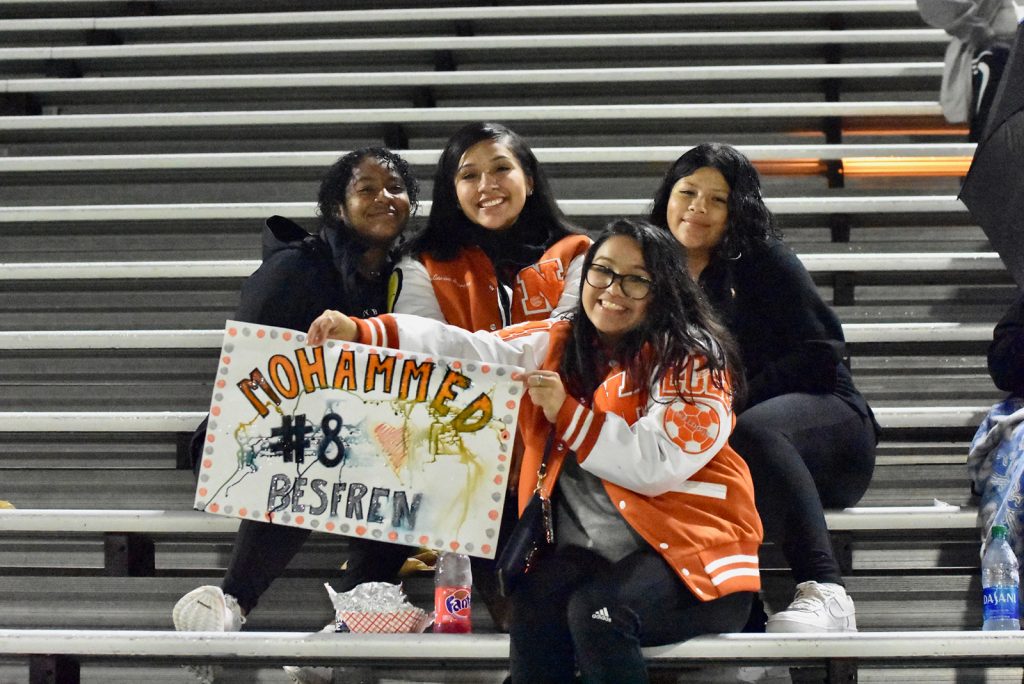 Mohammed has some fans in the stands. 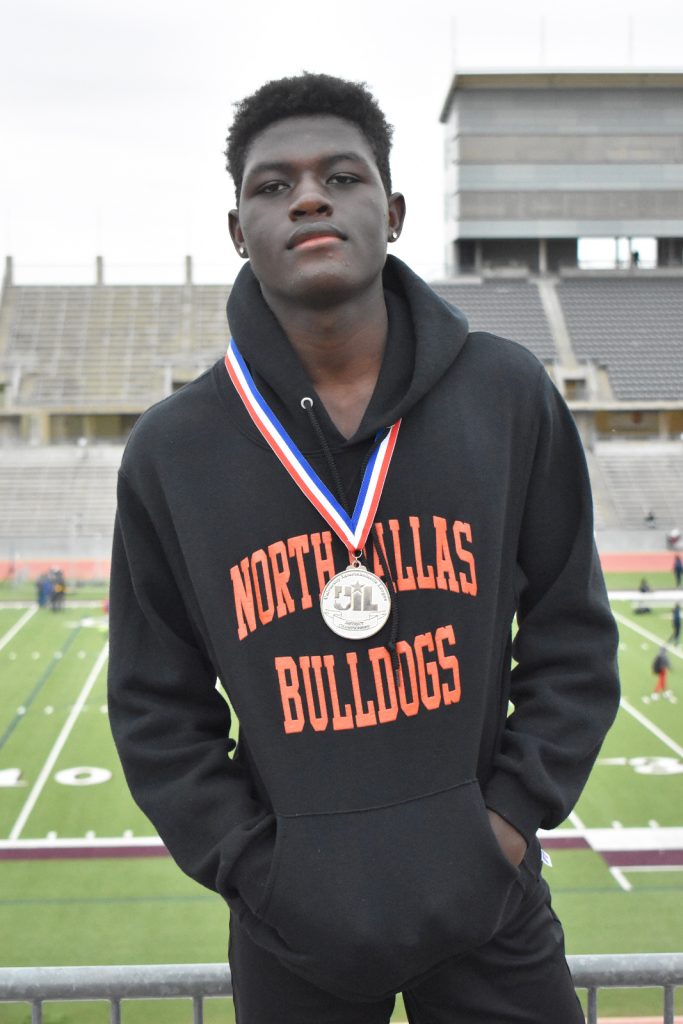 As a freshman, Mohammed Bility took second place in the 110-meter hurdles at the district meet in April. 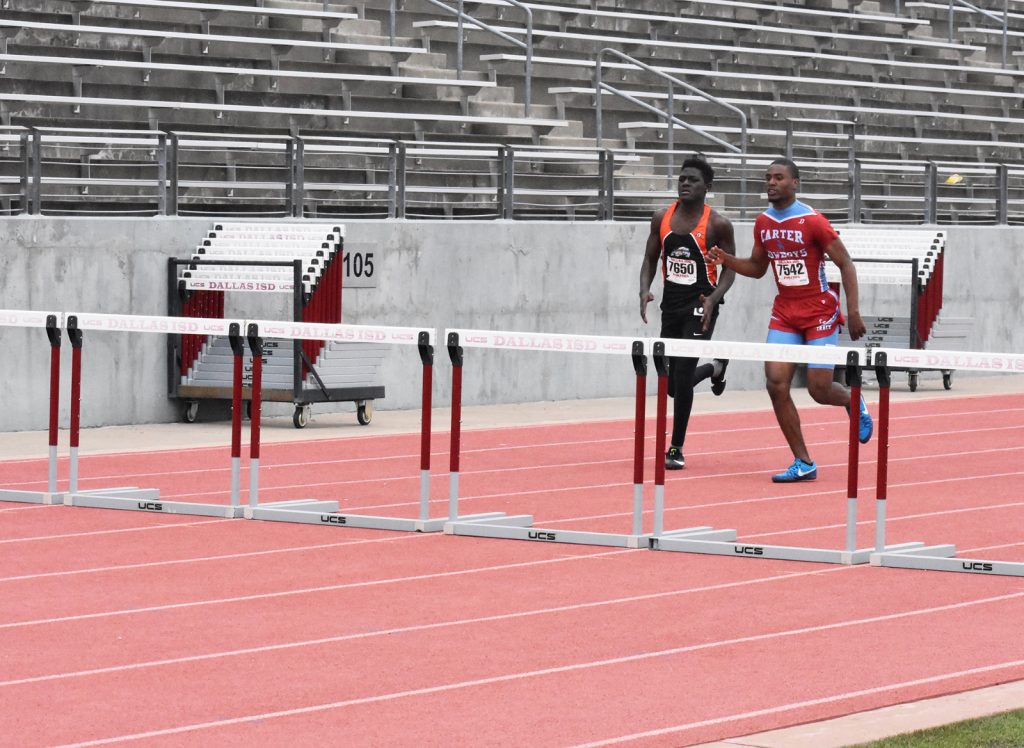 Mohammed Bility (left) competes in the 300 hurdles in April.