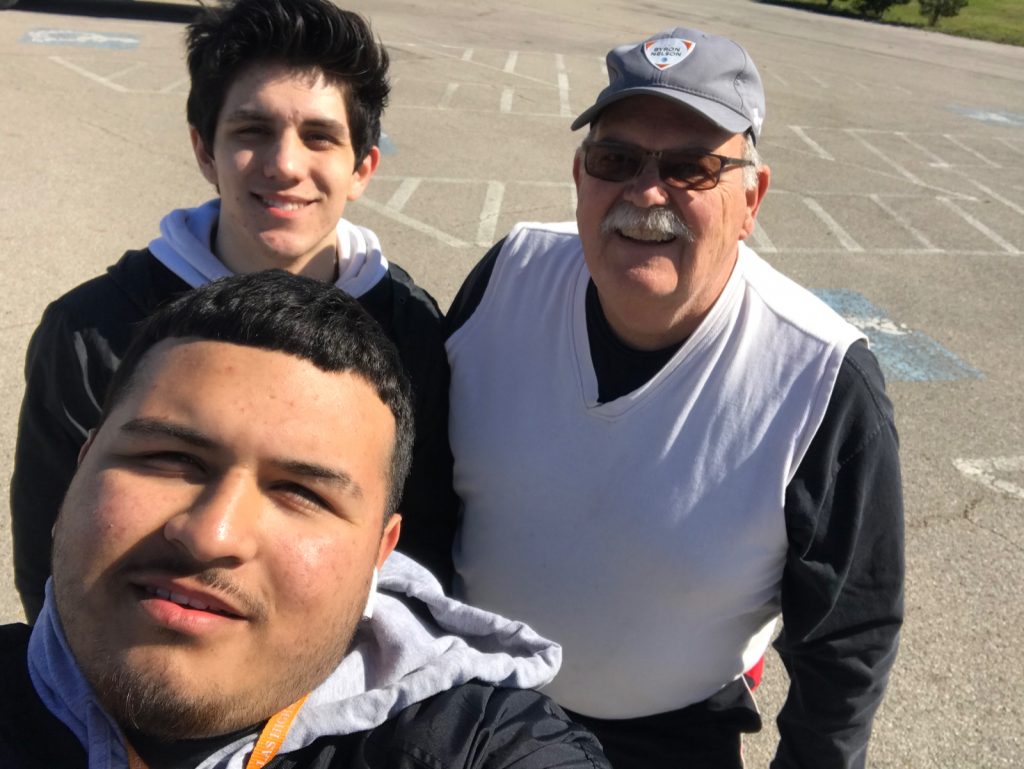 North Dallas golf coach Tom Crabb has had a fluid lineup of golfers this season. He sometimes never knew until that morning who was going to go to the weekly tournaments.
With the regular season over and the Dallas ISD shut down indefinitely, he now waits to see if the season will resume. The North Dallas golfers were scheduled to play in the District 12-4A meet, with the girls team on March 23-24 at Luna Vista Golf Course, and the boys team on March 30-31 at Keeton.
Each North Dallas team has three to four golfers, which is not enough to qualify for a team score. But Coach Crabb, who is in his first season coaching the North Dallas golf team, has been trying to develop his young golfers and build the teams for the future.

“The thing that I like about coaching is taking the pure beginner and see if we can get them to be successful,” said Coach Crabb, who used to coach at Woodrow Wilson. “At this level, success is just making a 6 or 7 or 8 on a hole, and not worrying about really your score, but making contact with the ball.

“There’s so many facets of the game that you have to teach. And putting is one of the most difficult things to teach because it’s such a skill involving the right touch and the right distance, besides being the right direction. So, you have to hit the putt straight but you also have to hit it the right speed, and that’s the hardest thing to teach beginning golfers besides making contact with the ball in general.”

Recently, Coach Crabb entered two boys in the tournament at Luna Vista Golf Course. Riley Saenz was competing in his first tournament and Andrew Castelan was working on “being consistent.”

“I want to say that Riley’s first game he’s really doing good, making good contact,” Coach Crabb said. “Andrew’s been very dedicated to practice and to making himself better. Just being out on the course four or five times, Andrew has already become a golfer and he’s just working on being consistent. If they can have a little success, making under max, a 7 or 6, that’s the goal at this level.”

“I’ve been playing 55 years and I still struggle with it.” 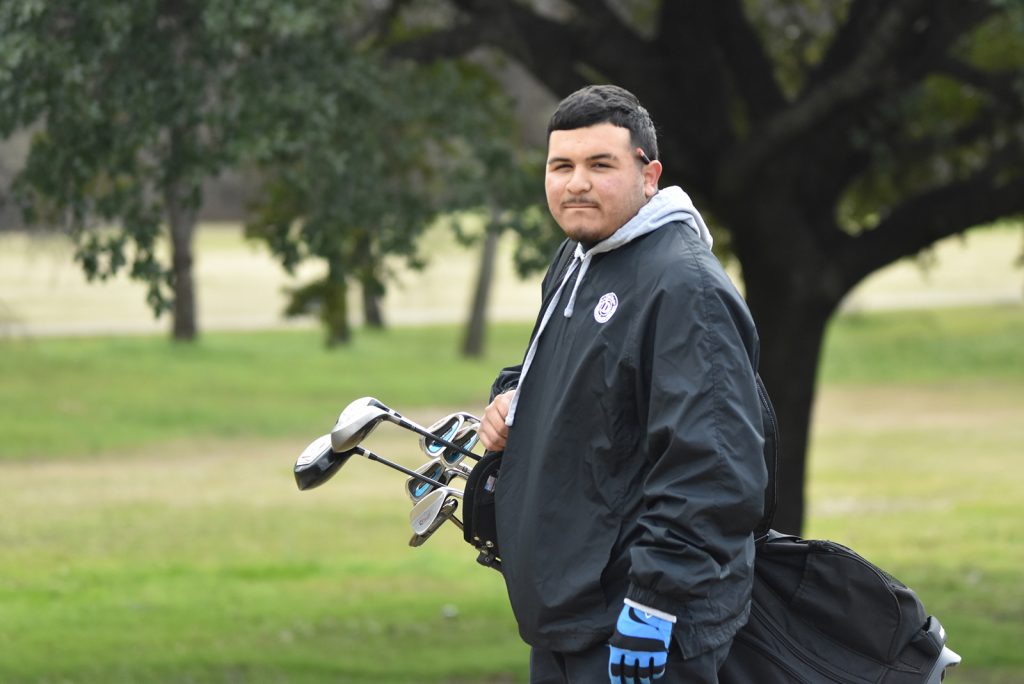 Andrew Castelan was working on being consistent in golf tournament. 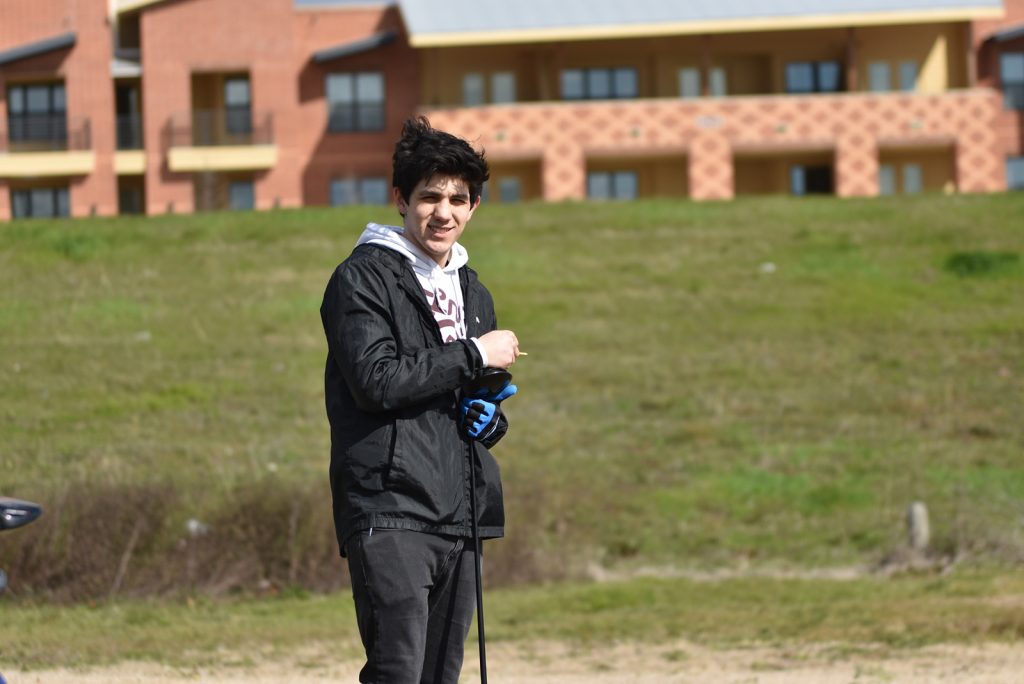 Riley Saenz made “good contact” in his first tournament at Luna Vista. 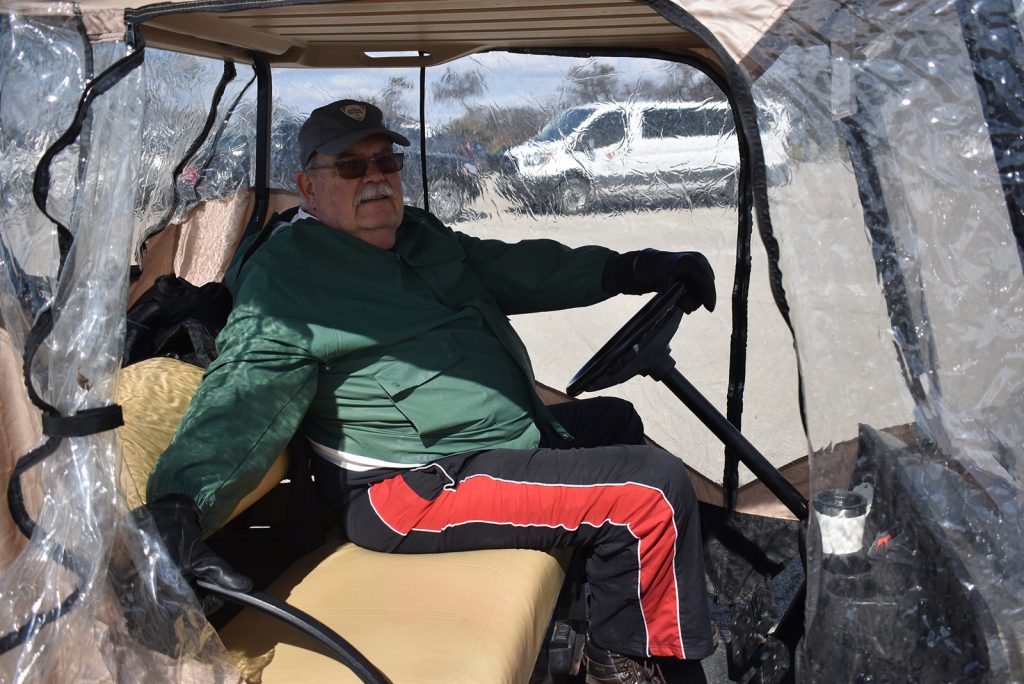 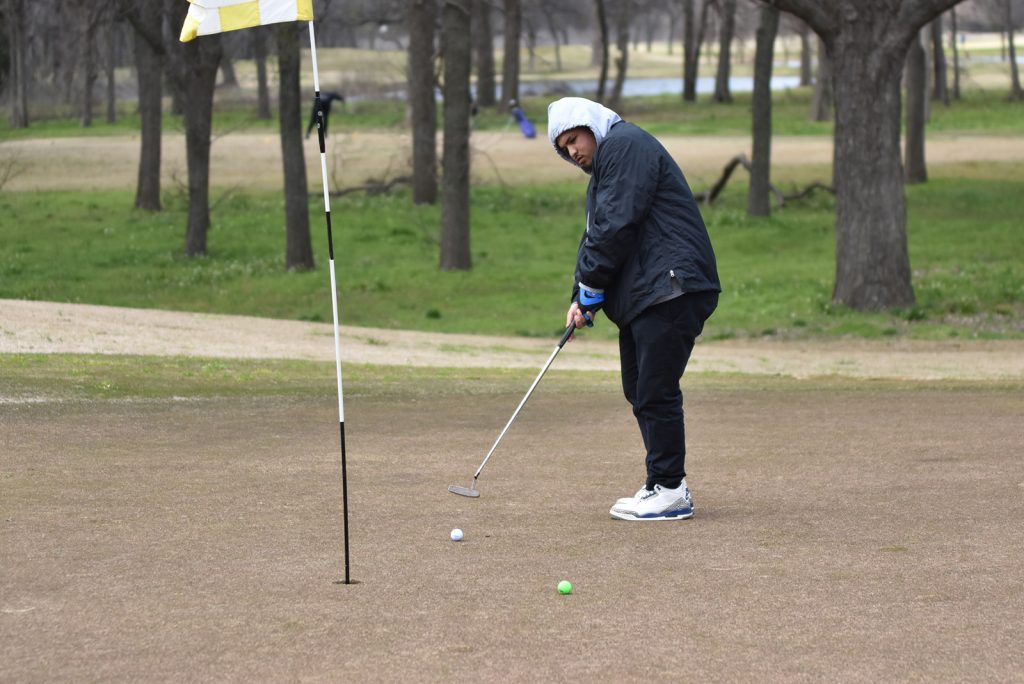 Andrew Castelan hits a soft putt toward the hole during a tournament at Luna Vista. 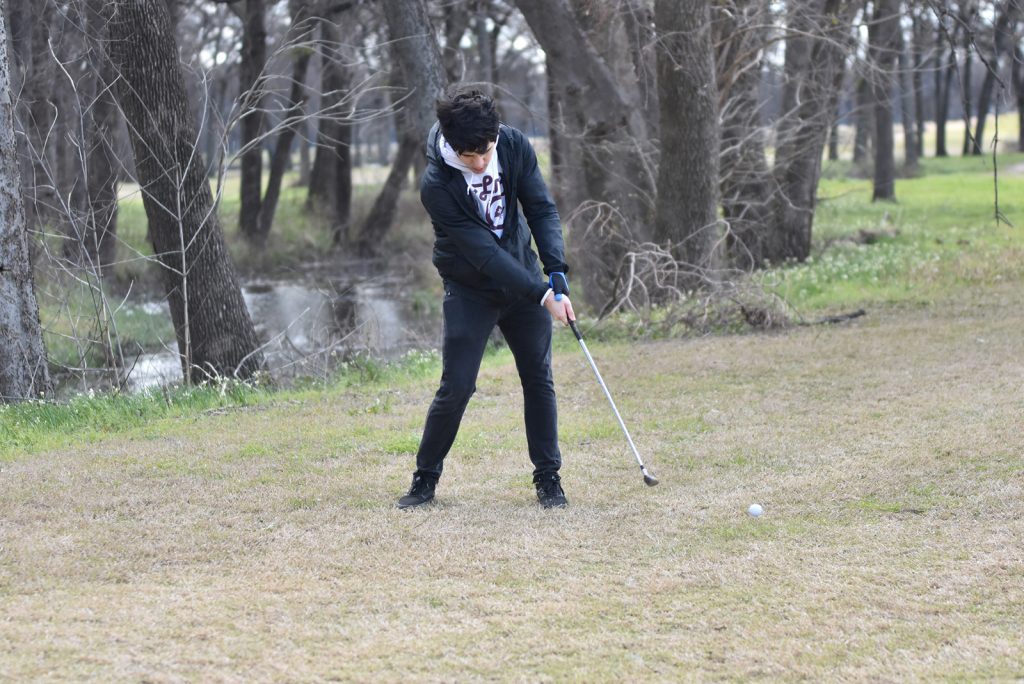 Riley Saenz chips up onto the green. 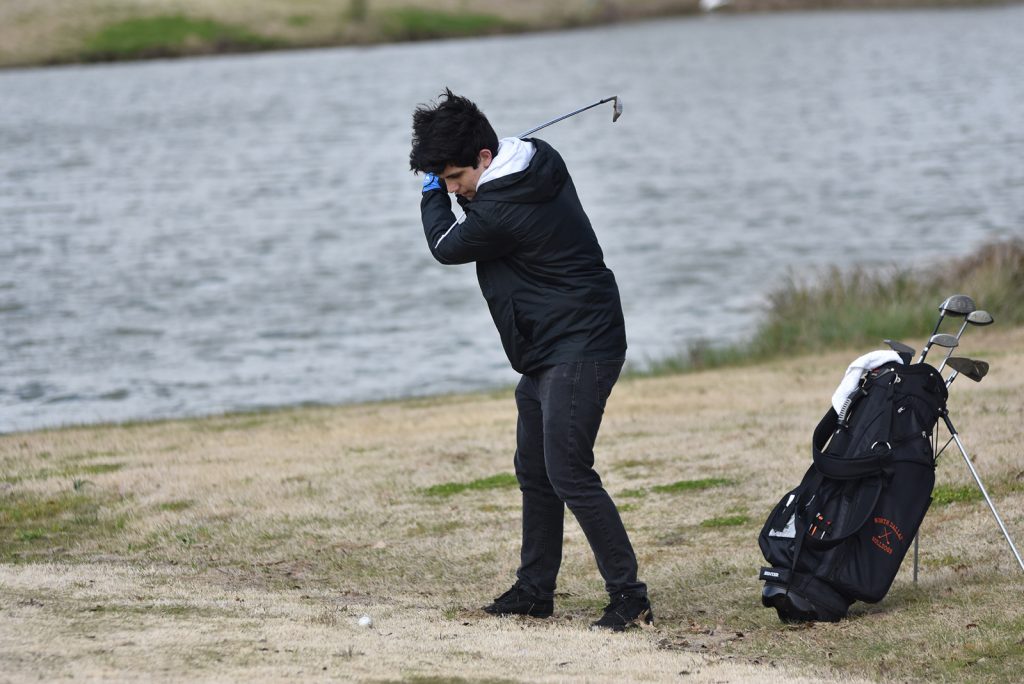 Riley takes a swing by the water. 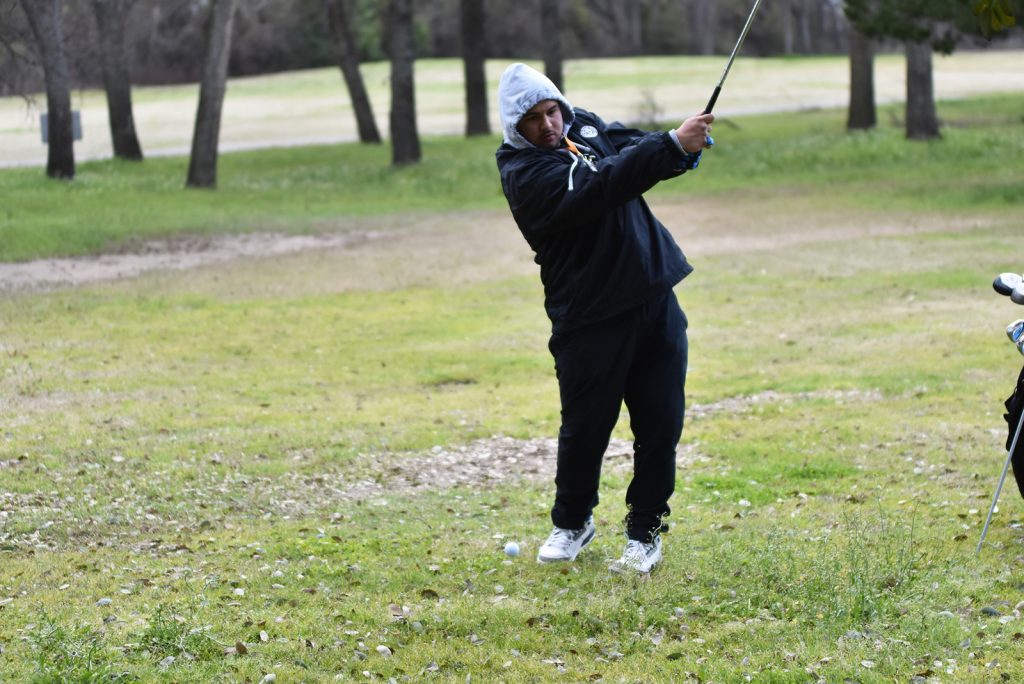 Andrew Castelan takes his second shot on a par-4 hole. 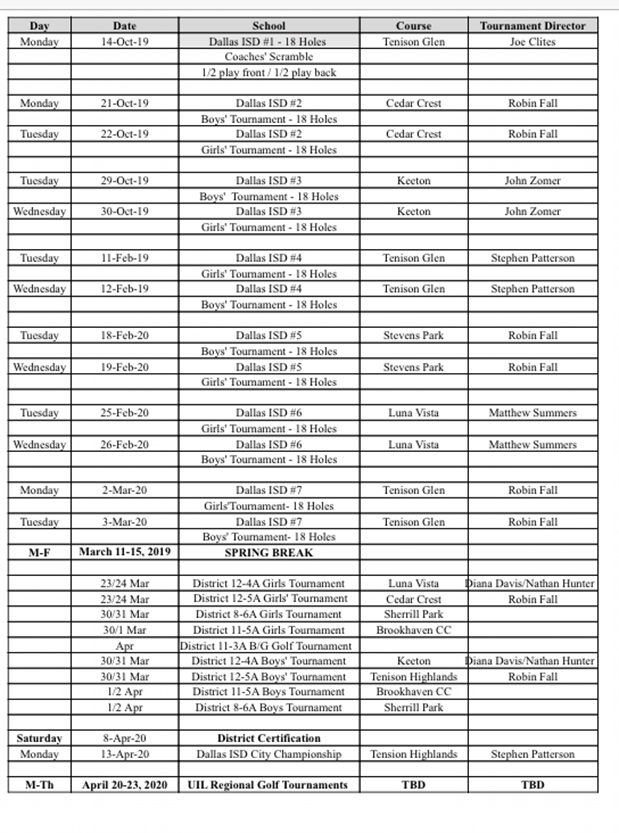