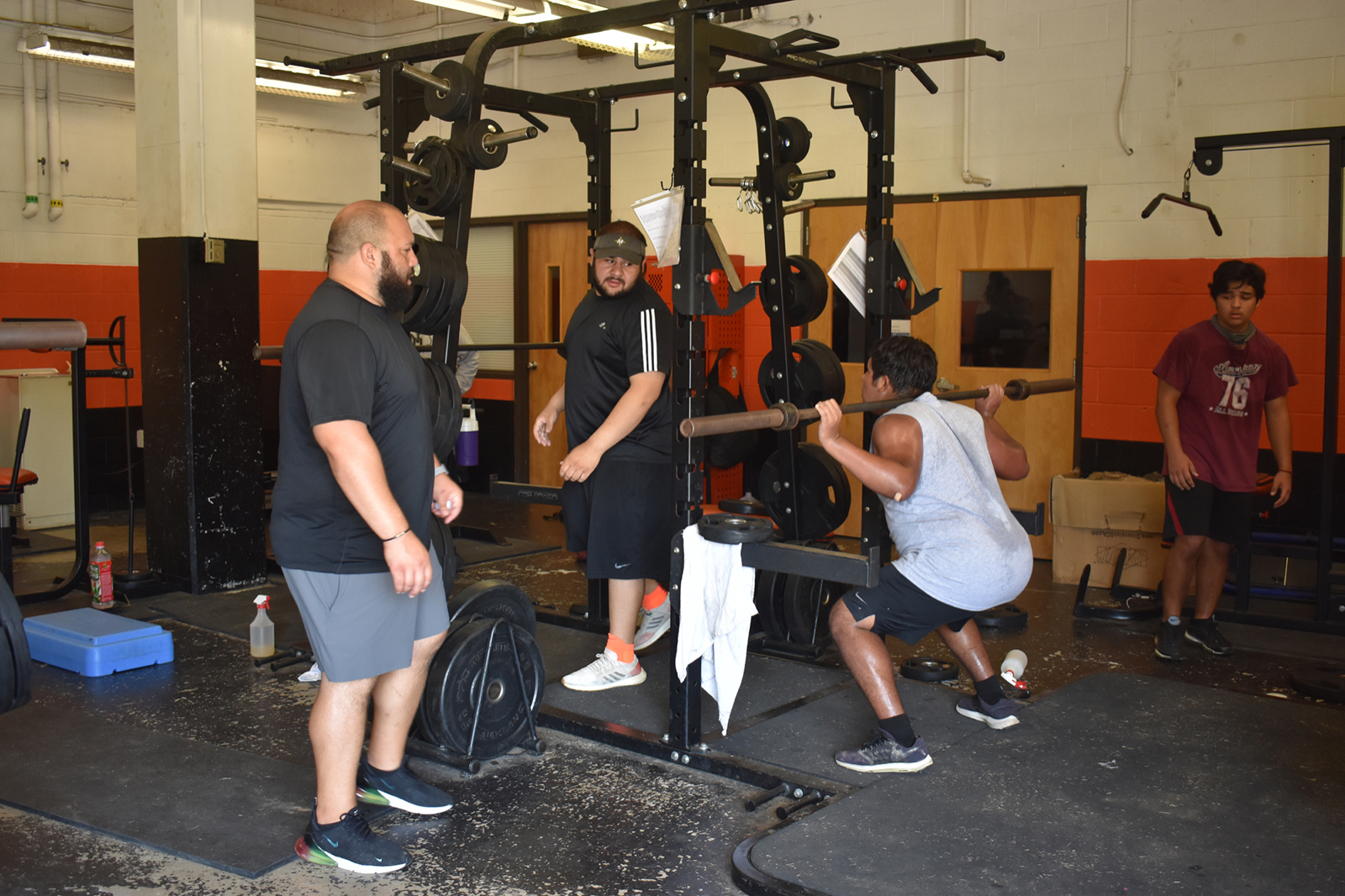 Coach Carlos Perez watches as Alexis Perez works with the weights on July 16. 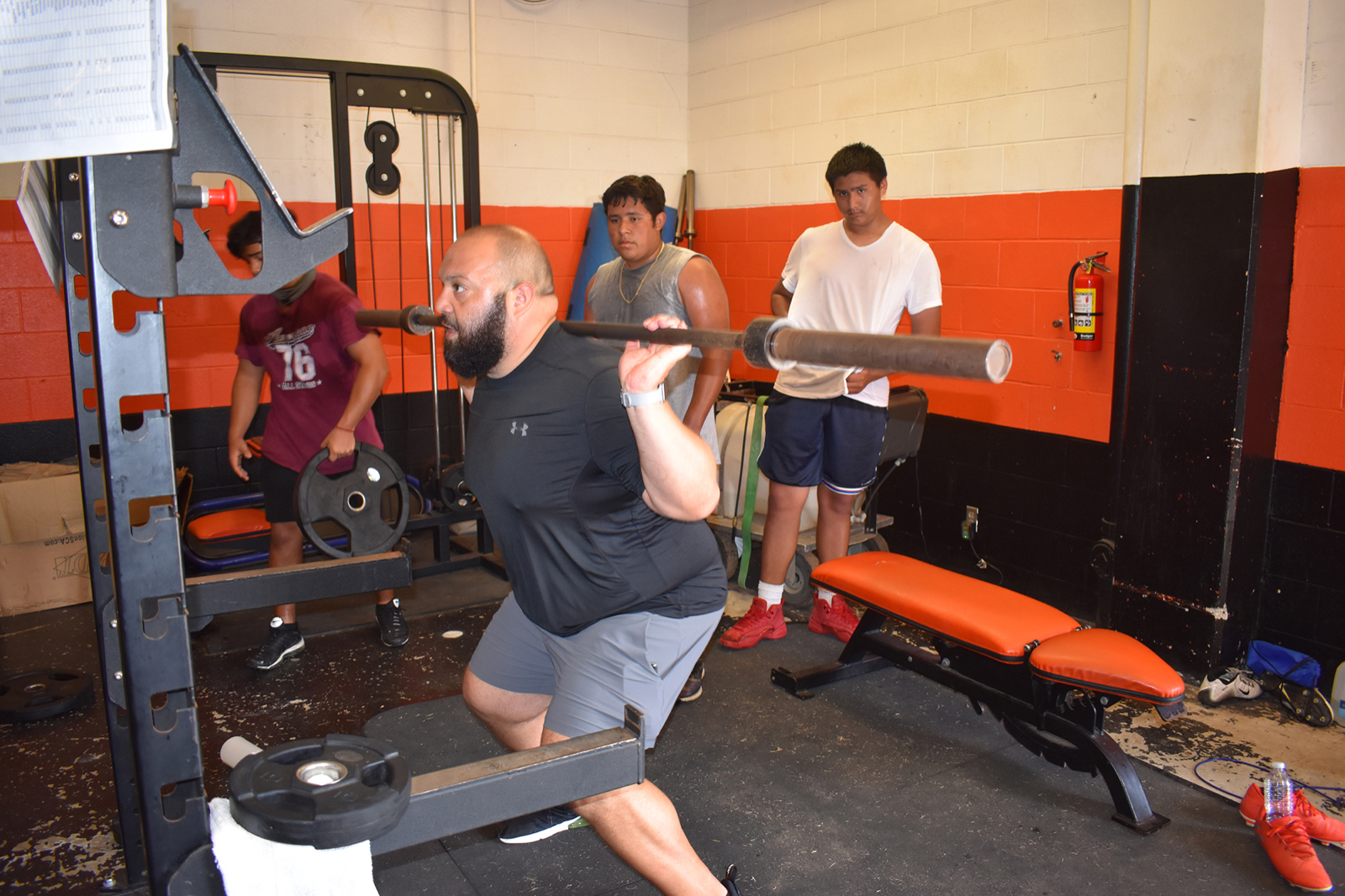 Then Coach Perez shows Alexis how it’s supposed to be done. 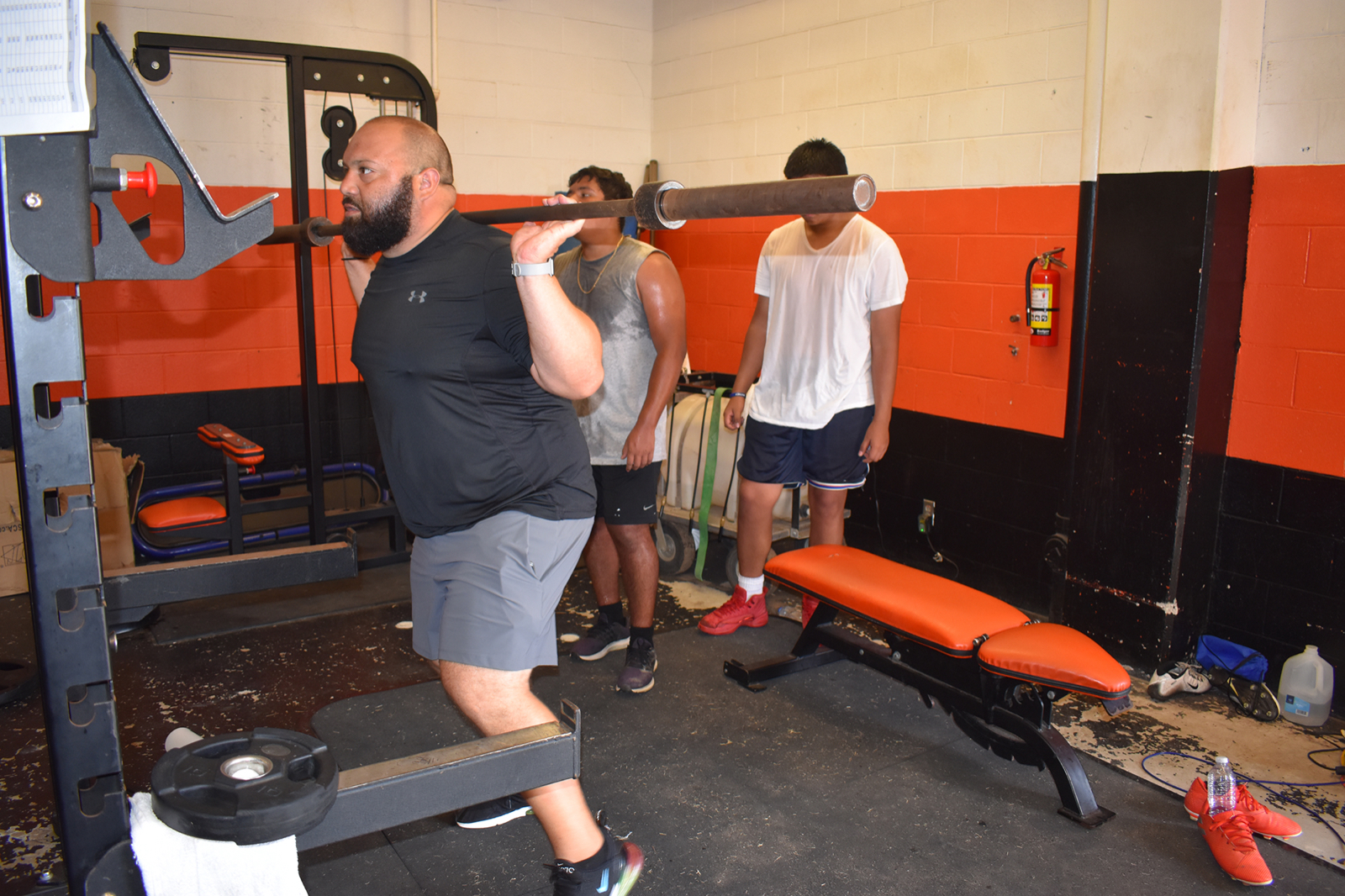 Coach Perez follows through on the lift.

Heading into his second season at the helm, Bulldogs Head Coach Bobby Estes and his coaches are “changing the culture” at North Dallas, and turning the athletes into a family, a community.

You could see it in the athletes’ hustle during the summer conditioning program. They gave it their best in every drill every time.

“When you’re inside a locker room, there’s a whole lot of love and a whole lot of support,” Coach Estes said last month. “If we can carry that from North Dallas athletics to West Village to crosstown, 20 years from now this place will be a better place.”

Defensive coordinator Carlos Perez has also watched the transformation among the athletes.

“These guys have bought in since the spring time. A lot of guys have seen their bodies transform,” Coach Perez said.  “They see they’re getting stronger, they’re getting in shape. They’re really intrigued by the process now. They’re enjoying it, they’re having fun with it and they like competing with each other.

“I tell you what, the culture has changed so much in just one year.  The intensity is high, the energy is high, the guys are dedicated, they bought in, they’re encouraging one another and they’re teaching the younger guys. That’s what the culture does.”

“When the middle school guys come in to workout, they learn the culture,” Coach Perez said. “They learn how you do stuff, how you operate, how you move around, so all those things go into a building a program. Things that we’re slowly changing around here.”

“I’m looking at the returners, and that’s a good thing. We’re seeing a lot of returners coming back,” Allen said. “It starts changing the culture when the kids buy in. It’s not so much us, it’s them together. When they decide we want to do this together, that’s when it’s going to happen. And they are all pretty closely connected.”

Coach Perez said the conditioning is “huge” for the athletes, and will help them the rest of the season.

“The weights play a part. The conditioning plays a huge part,” he said. “We want to be in shape to where we’re playing a full game at the same speed as the first day as the last play. We want to be able to make the plays in the fourth quarter this year that we should’ve made last season. The guys are really intrigued by that, and want to get better, want to play a full game if we get a chance to.”

The North Dallas summer program went three weeks before Dallas ISD decided to shut down all the conditioning for two weeks. After coming back for four days (July 13-16), Dallas County officials have shut down the sports program until after Labor Day (Sept. 7). 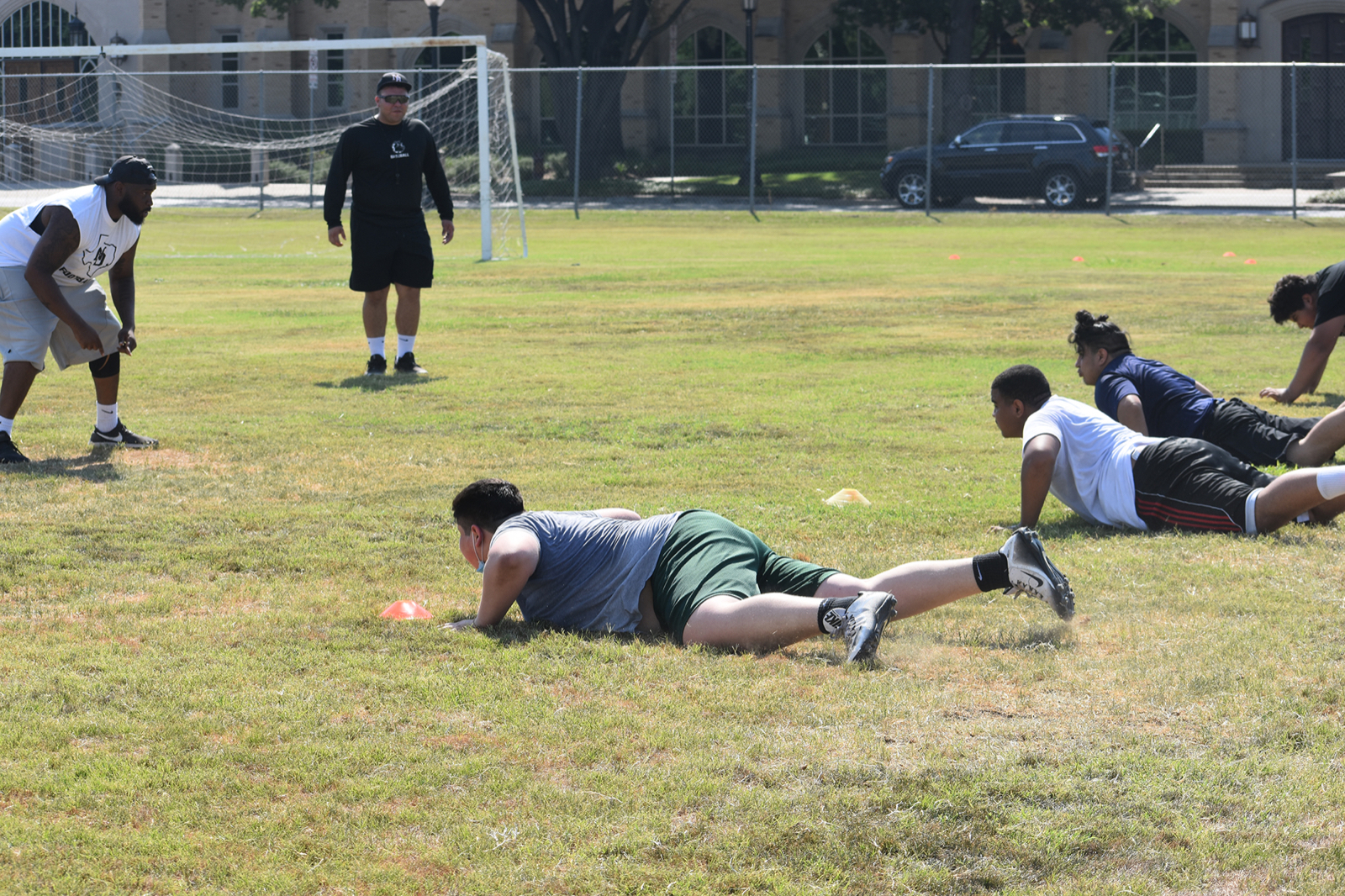 The Bulldogs hit the ground last month in an agility workout led by Coach Antonio McGhee. 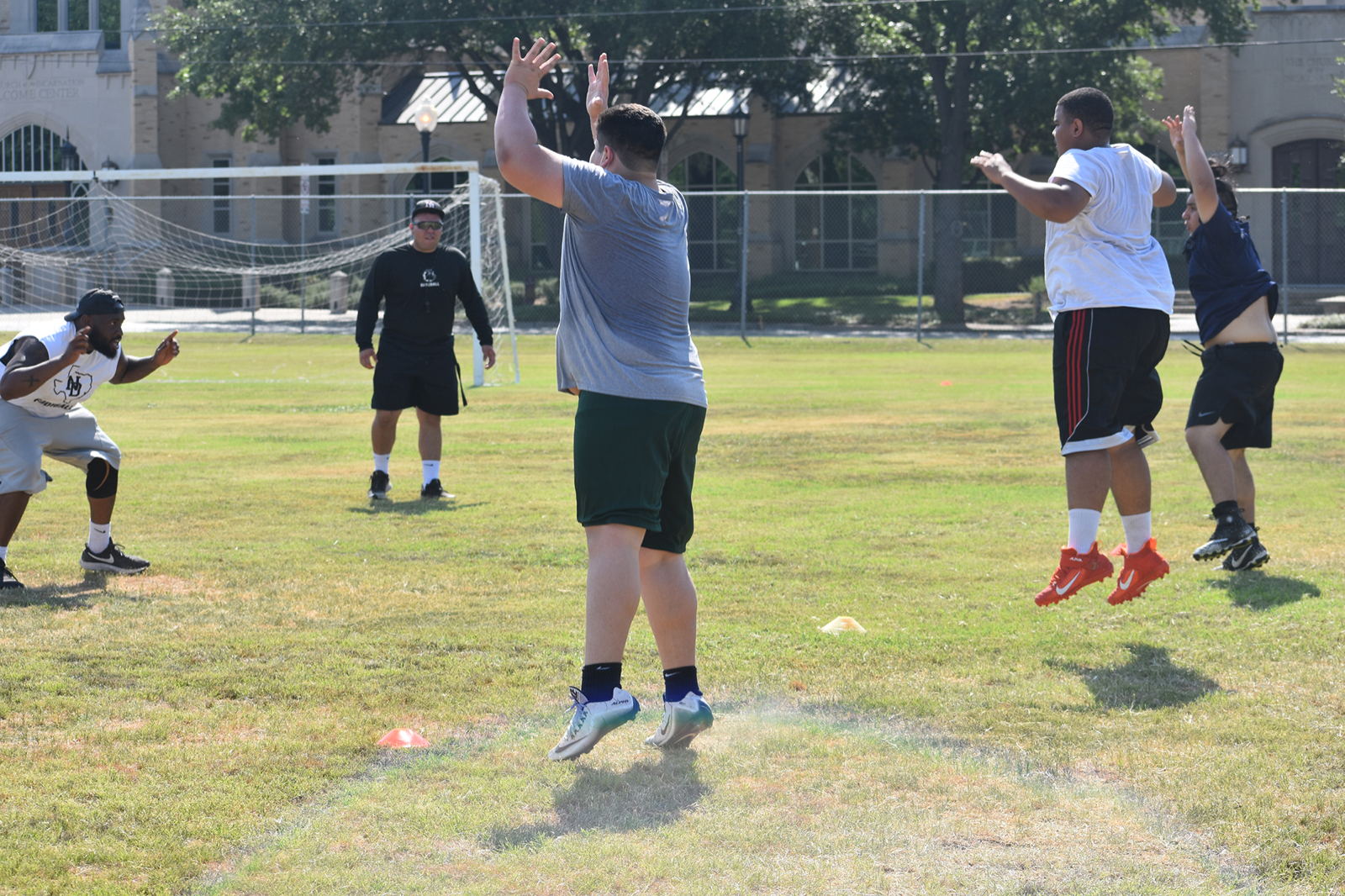 And they also jumped in the air. 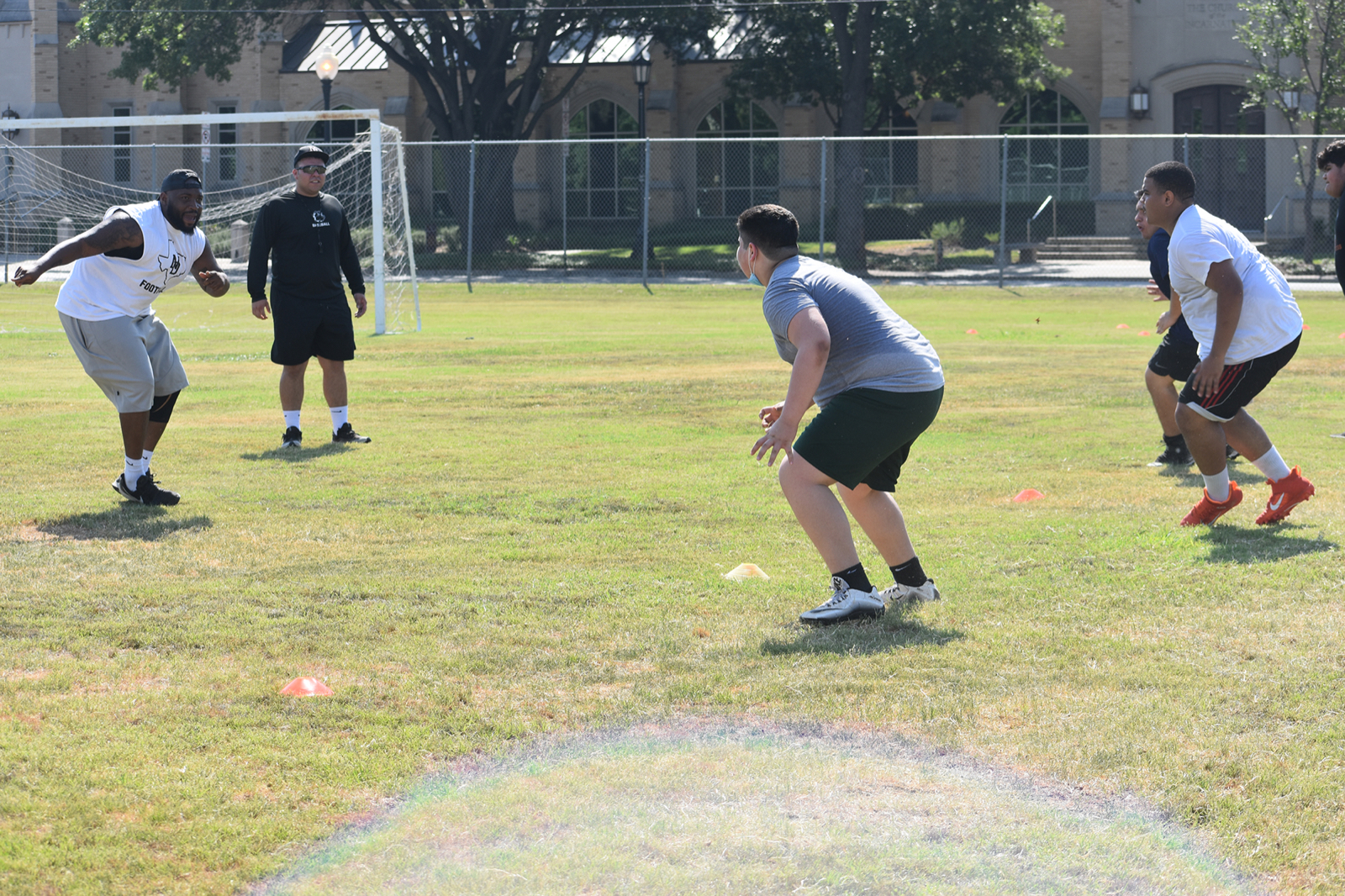