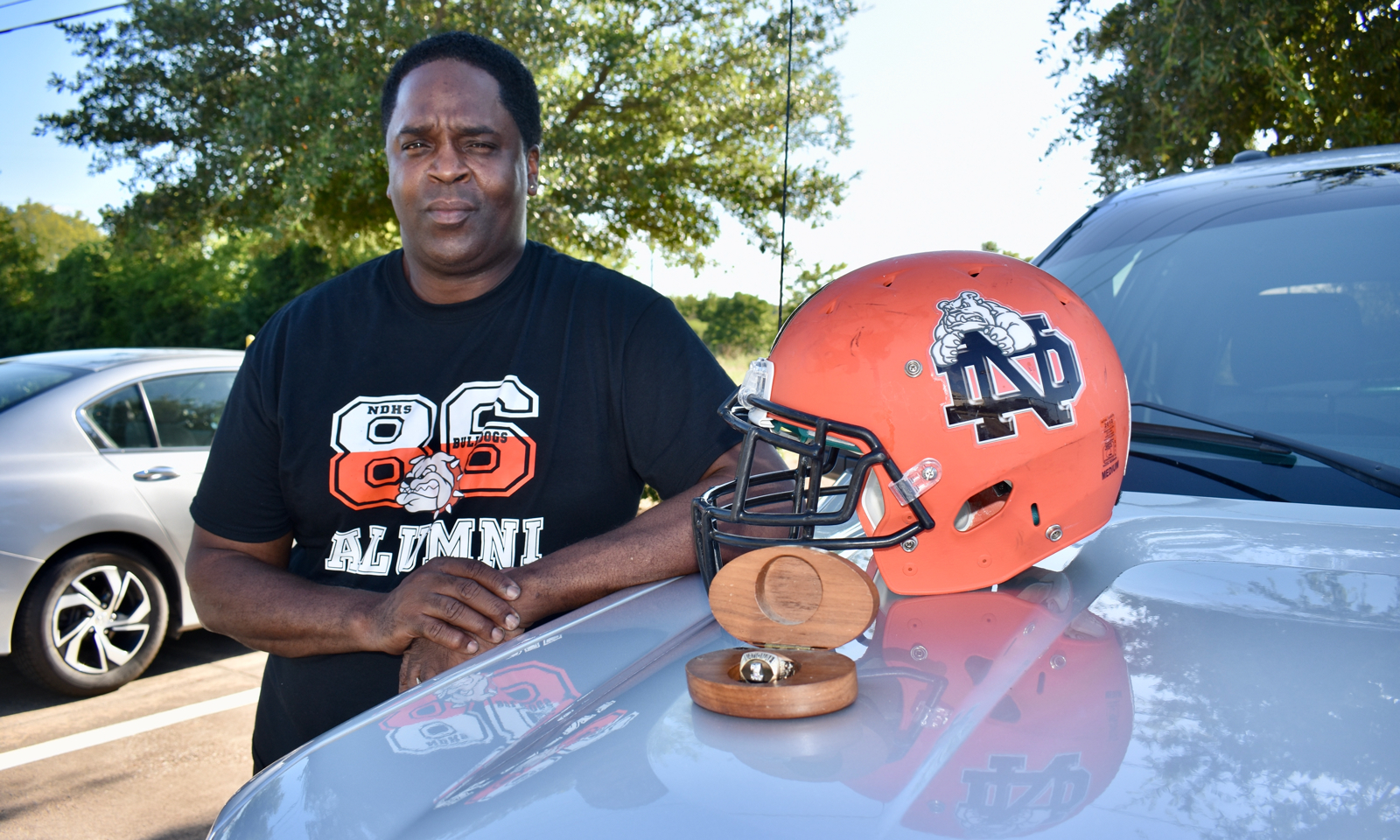 Carey Johnson, who passed for over 1,200 yards passing and rushed for over 300 yards as a senior in the 1985 season, displays his 1987 national championship ring from Cameron University. 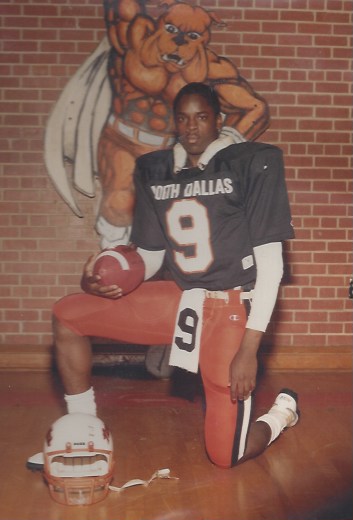 North Dallas 1986 graduate Carey Johnson has a unique distinction: “I’m the only one from North Dallas who ever got a national championship ring from college.”

Johnson, who played quarterback and safety at North Dallas, went on to play football at Cameron University in Lawton, Oklahoma. Cameron won the NAIA Division I national championship in 1987, Johnson’s sophomore year.

Johnson readily admits there might be another North Dallas graduate who went on to win a national football championship in college, but he has not heard of anybody else doing that.

At 6-foot and 170 pounds his senior season, he led the district in passing yards with over 1,200 yards. The Bulldogs went 3-7 that season, ending the season with an 8-0 victory over Seagoville.

“We started off 2-0, then we went on a slide,” Johnson said, recalling the ’85 season. “We were in every game we played. We were beating Lincoln 14-0 at halftime, then they came back and beat us. We were very competitive during that time. But as far as playoffs go, we never made the playoffs, but we were always trying to make the team better.”

Johnson, now 52, is proud to be a Bulldog. He’s kept a collection of articles and photos from his days at North Dallas. Today, he works as a security officer with the DeSoto ISD, and he’s watched DeSoto’s success on the football field.

“We were proud to go to North Dallas. We still stand up for pride. We fought hard, we didn’t give up,” he said. “Today, kids are not as disciplined as we were. We were disciplined as far as wanting to work out. The coaches getting on our tails and everything. We knew we had to pass classes. Back then if you didn’t pass classes you didn’t play. We started out with 53 players but after ‘Pass No Play,’ we ended up with 33. That was another reason why we had to go both ways then.”

“It was a pretty good year,” Johnson recalled about his freshman season. “Kevin Murray had just left. So we came in in ’83.  He was a freshman at A&M. We had a pretty decent team; we just didn’t have a lot of depth.

“I always wanted to play defense,” he continued. “But we had a tryout our freshman year to see who could play quarterback. And after seeing the guys play quarterback, I wasn’t impressed with the candidates that we had, so I said, ‘I can do better than that. Let me try.’ So I tried it and Coach said, ‘You are our quarterback.’ I demonstrated it a little better even though some of the guys had played quarterback before, but my athleticism took over for playing quarterback at that time.” 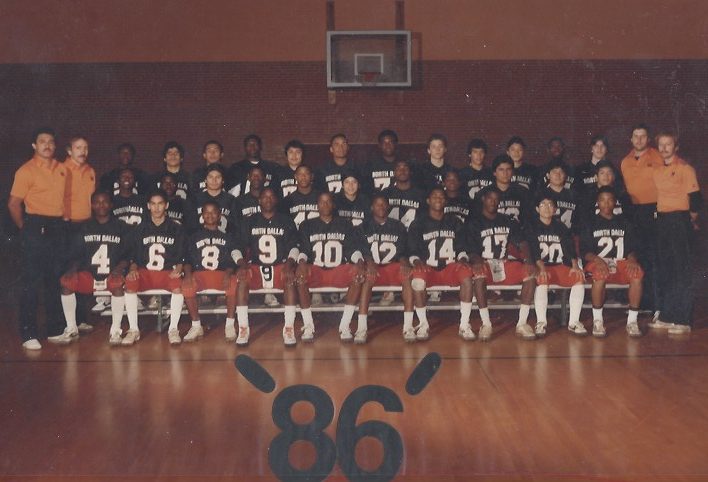 “I played free safety and quarterback at the same time. I enjoyed more playing defense, but I got more accolades playing quarterback,” Johnson said. “My senior year, I led the district in passing. It’s not easy. It wasn’t easy but I did it. It was through hard work. I had some good teammates at the time. Senior year was pretty good.

“We went 3-7 but this senior team we fought hard, we did a lot of good things together. If you look at our scores, we were in all our games, except two. We would practice hard. I was voted most athletic senior year,” he said.

Johnson said he was an option quarterback, which makes leading the district in passing yards quite surprising.

“We didn’t really pass the ball that much then. We ran the option. I was an option qurterback, which means I ran more than I passed even though I threw the ball,” he said. “I think I passed for over 1,200 yards, but I rushed for over 300 yards. That was considered 35 years ago, a lot of yards.

“We ran the option. We didn’t throw over 25 times a game. We ran the ball more. During that time, option was the main design of offenses. Everybody ran the ball. Nobody really threw the ball,” he said.

Johnson’s favorite game as a senior was the 8-0 win over Seagoville. Johnson ran 75 yards to the 1-yard line before scoring the game’s only touchdown on a 1-yard run.

“The Seagoville game wasn’t my best game but it was my favorite game,” he added. “The reason I say that is because some of the guys I know today played for Seagoville. The friends I went to college with played at Seagoville, so we always reminisce about that game.” 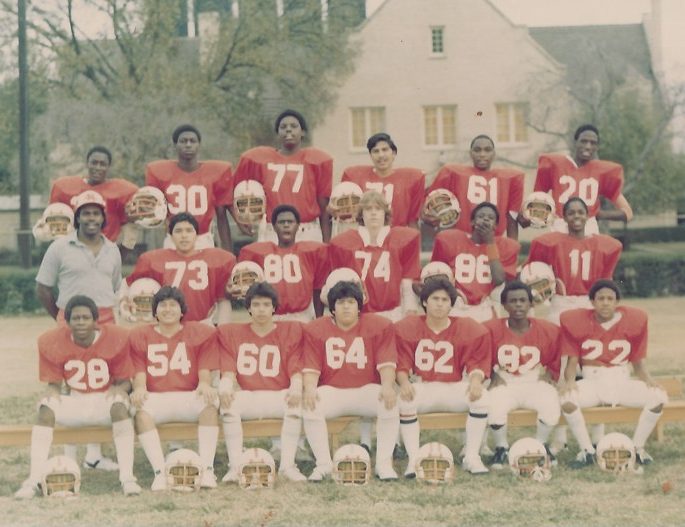 Johnson made some comparisons to today’s athletes and when he played.

On playing football today: “High school is way different today. A lot of the kids go where the winning is. They want to go to the school where the winning is instead going of the school they are supposed to in your neighborhood. Even though North Dallas has a lot of kids, they don’t have a lot of kids that want to try out for the football team with athletic ability like they could have.”

“To be honest, during that time we didn’t have problems like there are today. I’m sure there were problems but I never came across an issue with me being black at North Dallas or for that matter, in the streets. I lived in Arlington Park but never got in trouble. Sports kept me busy and then I worked. I never was in the streets or nothing. My mom raised me pretty well — go to work, come home; go to sports, come home. I played outside like any kid but I didn’t get in trouble. We didn’t go rob anybody. We had fun. It was about fun. We played basketball until it got dark. We played football until it got dark, then we went into the house.”

On summer workouts: “You’re talking about 35 years ago. We didn’t have the camps and stuff that they have now. We had to work out on our own, or wait until school. Sometimes we did and sometimes we didn’t. Today, high school guys are like college programs. They’re not really off for the summer. They’re working out, going to camps, visiting colleges. During my time, all we had to do was wake up and go to our high school, work out and then go home. When school wasn’t open, we didn’ work out that much.

“You can always work out on your own. In DeSoto, kids work out all the time. If you go to a park, they’re running, doing sprints. They call it ‘making their craft better.’ They’re always trying to get better. I recommend kids when you’re not in school, to work out, and when you can, even though the pandemic is going on, work out by yourself or workout with somebody. You just don’t have to have everybody with you to work out. Also, keep your distance, but you can still get your workout in. A lot of people work out over here all day long. I tell everybody to take care of your bodies, make sure know what you’re doing, get the right instruction, and keep working hard.”

On what colleges want: “Today’s athletes are judged by how they look. They like the big athlete, the 6-3, 6-4, 220-pound. That’s what college recruiters look at: size. If you’re not 6-2 playing wide receiver, you’re considered short. They want a bigger receiver to go get the ball. They want a bigger cornerback. They don’t want anyone short unless you’re playing slot receiver. If you playing slot, that’s the ideal spot, if you’re short. That’s what college recruiters like today: size and speed.”

Johnson had the opportunity to speak to the Bulldogs at halftime of the homecoming game against Alvarado last season.

“Basically, I told them y’all keep fighting. Don’t give up,” he said. “Even though the score says what it says,  you got to keep fighting. That’s all I was trying to tell them. Keep your head up, keep fighting. I was the team captain for that game against Alvarado. I was trying to keep the players’ spirits up high. They tried to fight. They just couldn’t overcome the obstacles.”

The Bulldogs finished with a 3-7 season in their first season under Head Coach Bobby Estes.

Johnson maintains his connection to the football program and to the class of ’86 alumni group. He reflected on his days at North Dallas.

“Remembering the times I was there. It was so much fun,” he said. “My teammates and classmates. You remember all the good times we had. You go back to those days when you were there, and that’s why I try to keep the connection. I remember all the times I was there, it was fun. The people, the teachers. I was able to go to college from North Dallas. I try to go back and reminisce.”

“Once a Bulldog, always a Bulldog. Like it says, since 1986,” Johnson said. “It’s been a long time since I left North Dallas, but I always have my memories to carry me, to make me reminisce how it was during those times. Great times, bad times. Like I say, Once a Bulldog, Always a Bulldog.” 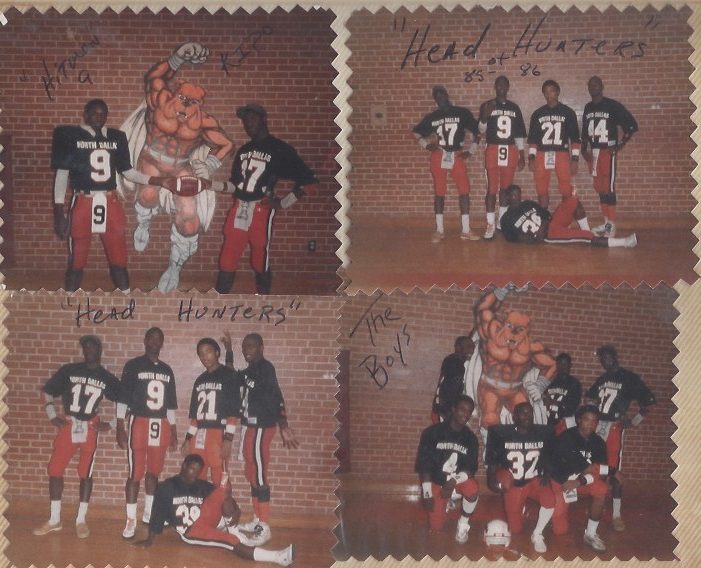 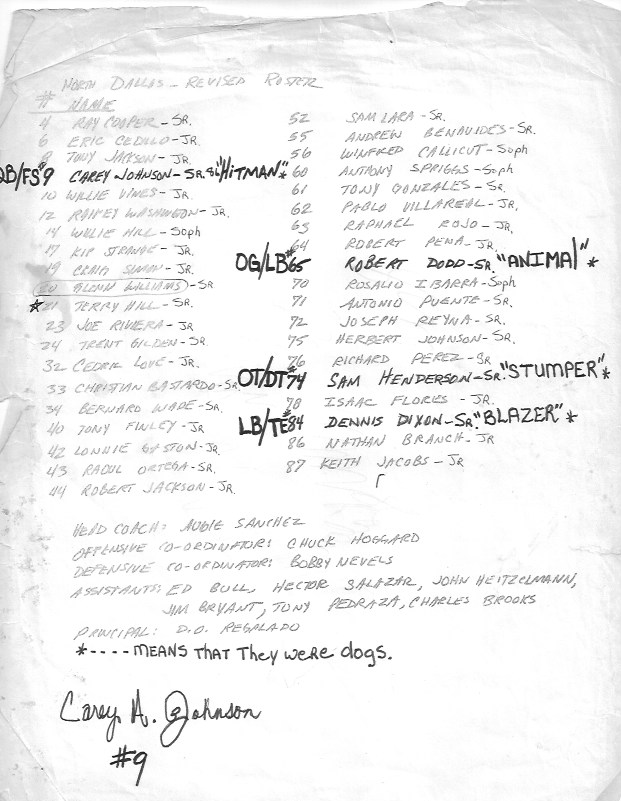 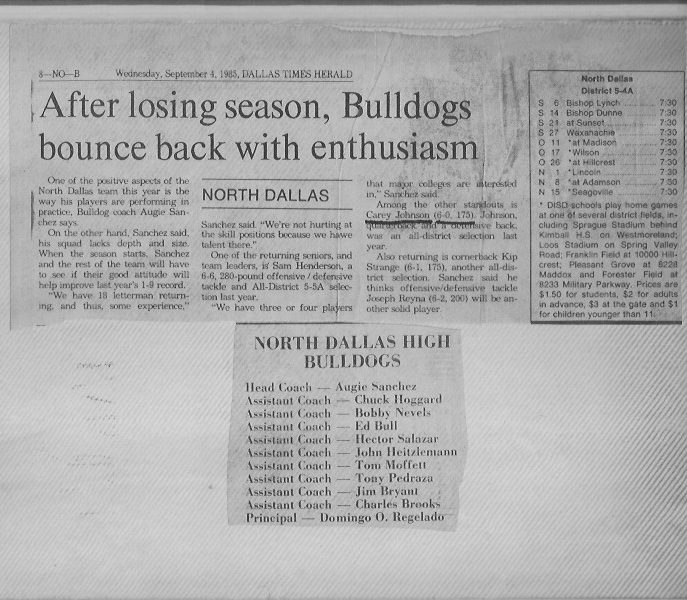 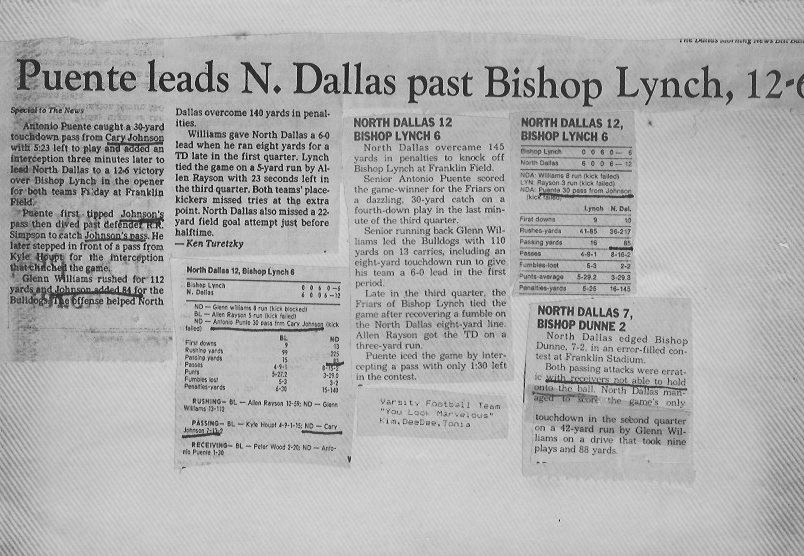 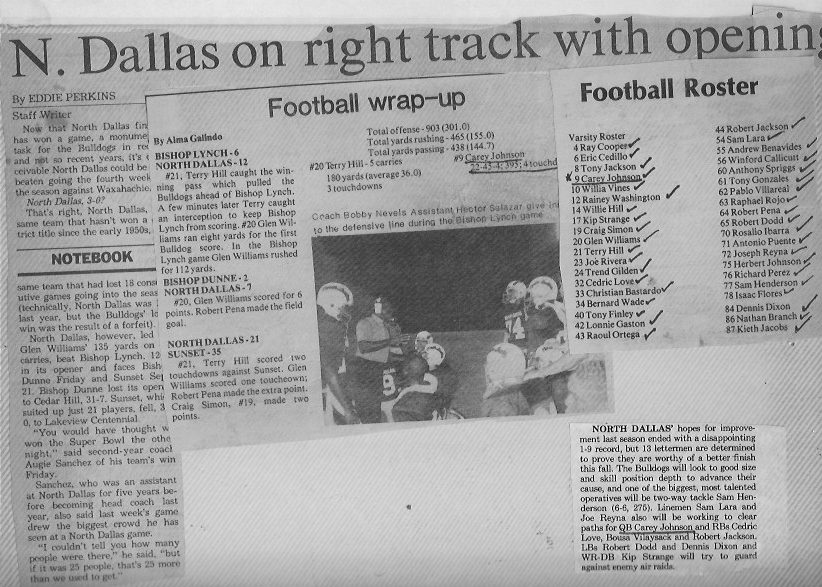 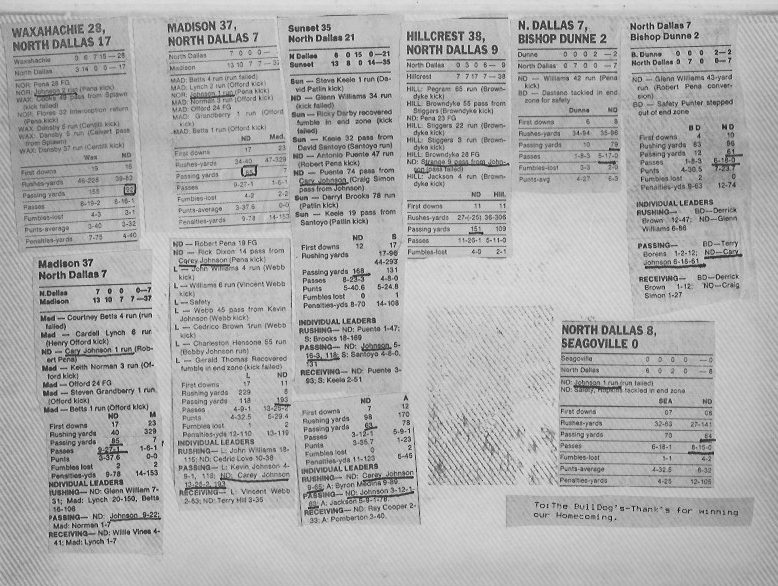 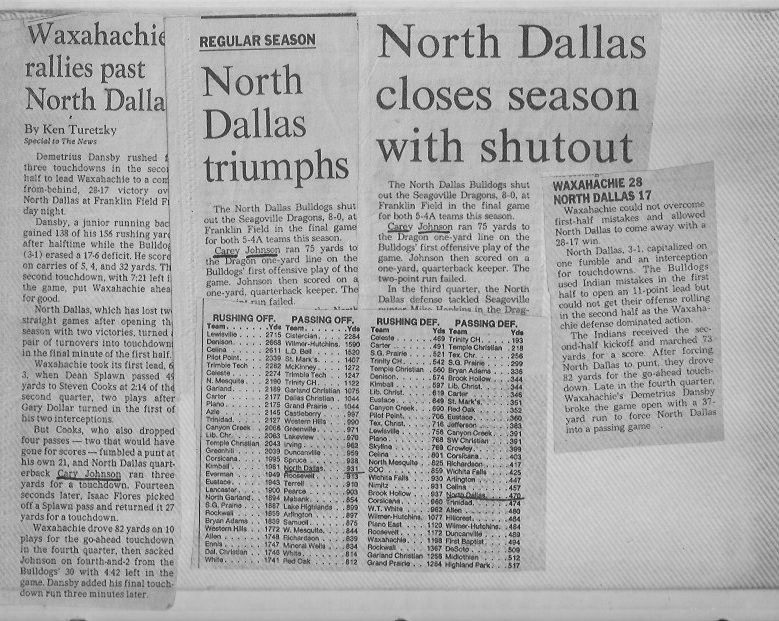 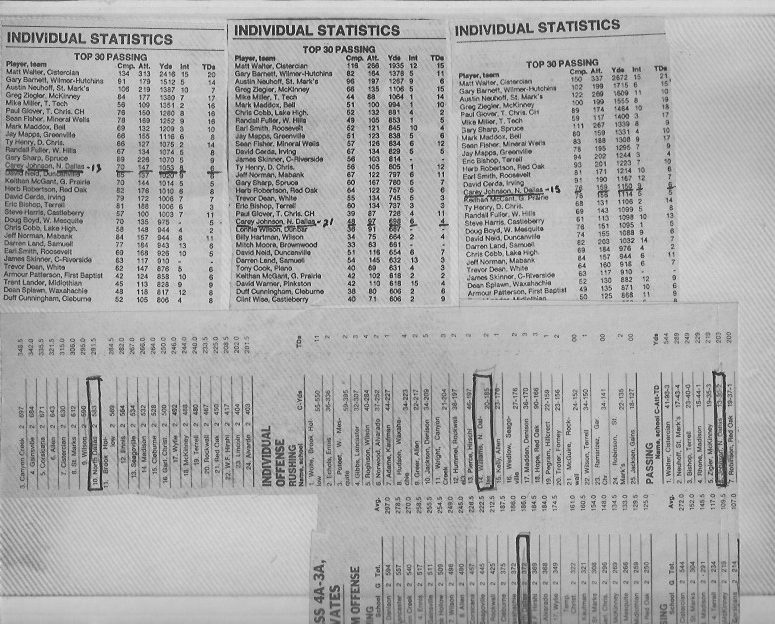