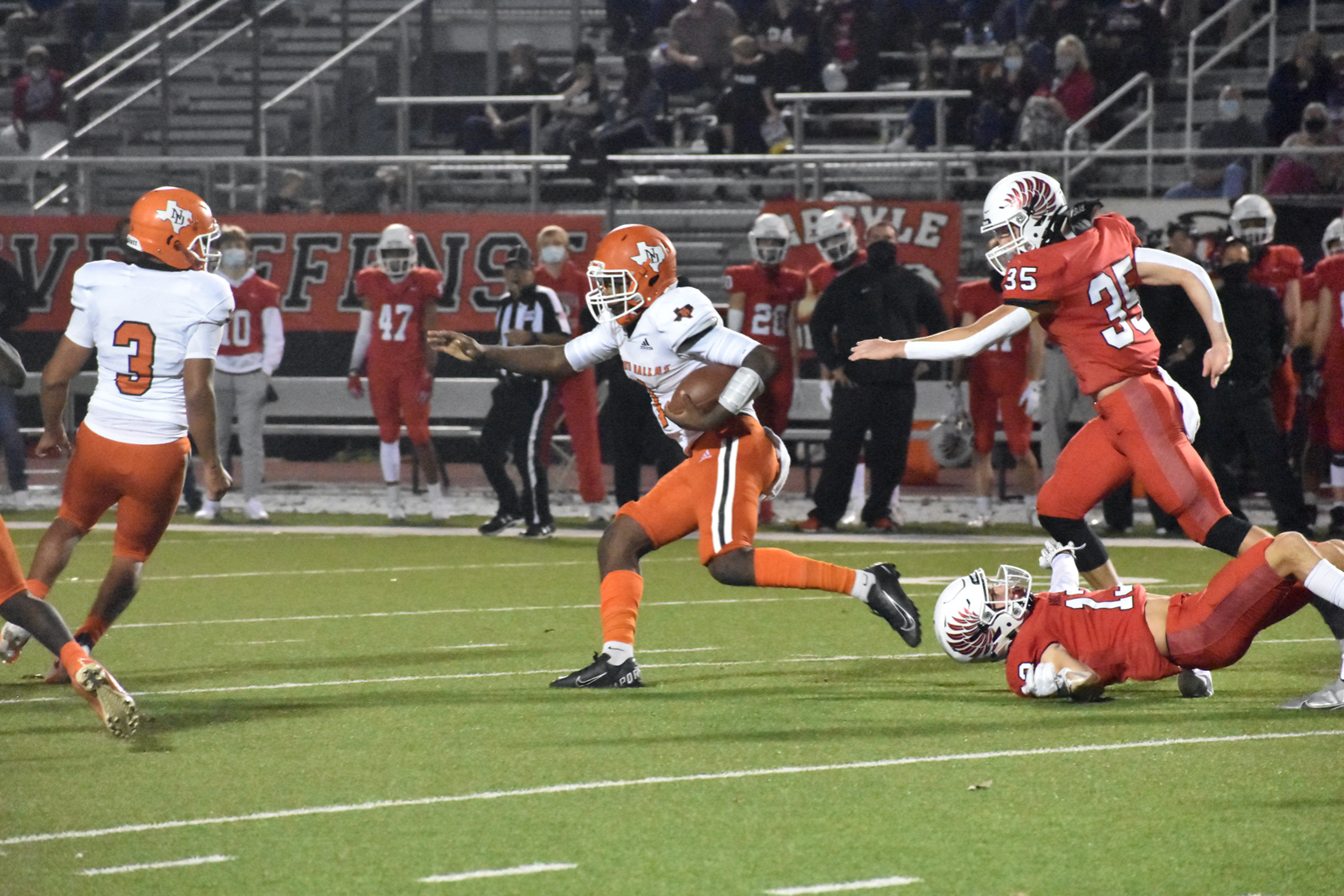 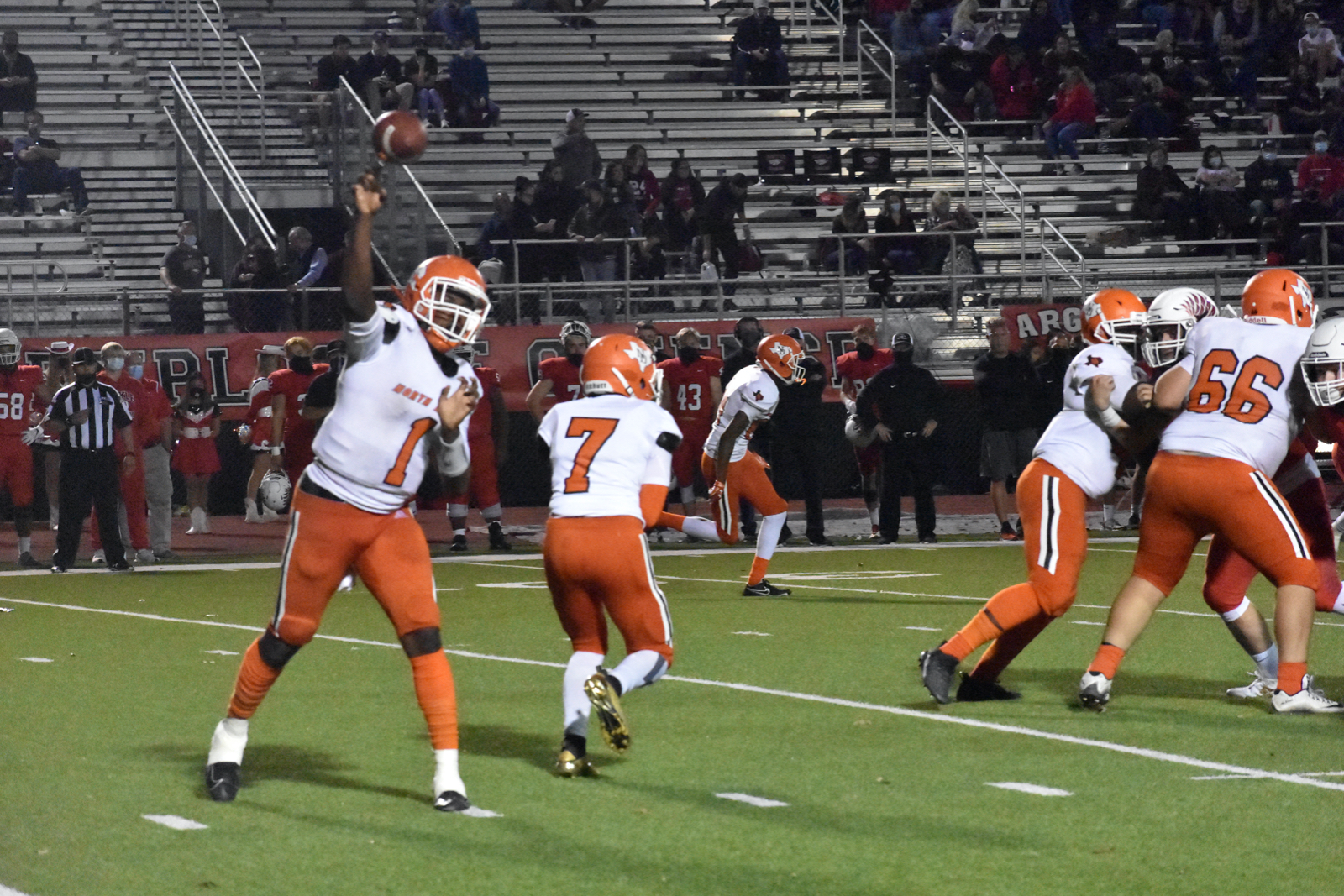 North Dallas got a chance to see what the No. 1 team in the state looks like up close and personal. And it wasn’t pretty for the Bulldogs.

Argyle took advantage of the Bulldogs’ mistakes, turning fumble recoveries into touchdowns, blocked punts into touchdowns, and a punt return into a touchdown — all in the first half. The No. 1-ranked Argyle Eagles (11-0) won 79-0 and will be advancing in the UIL playoffs.

“I’m proud of them,” Coach Estes said. “I’m not proud of how it ended up. I tell you what it’s a tough thing to do … It says something about your character when you know you’re outmanned, you know that you out-gunned. These kids have character, because they were looking down a tunnel that wasn’t very promising, and they still lined up.

“It was a little too big of a moment for them.”

Junior Devion Long led the Bulldogs to the playoffs in his first season at quarterback. He was one of the bright spots against Argyle, rushing for 75 yards on 20 carries. He also completed 6 of 12 passes for 32 yards.

“It was a good season. I had a lot of fun. We broke history,” Devion said. “To be honest, that was my main goal to break history for the school. I did it for my parents, my family, the team, the coaching staff, and the program. It was a fun season.”

What can we expect next season?

“A lot,” he said. “More heart, more integrity, more of everything.”

And that’s good news for the Bulldogs.

“The kids played hard. It’s all about the kids. Hopefully, they realize what happened tonight, and we’ll be back next year,” assistant coach Antonio McGhee said.

“Games like this is hard to find a lot of good to say, but if you look at the whole season, they definitely made great strides, made great progress,” said Coach Fuller, who was in his first season with North Dallas. “Very proud of all our guys and the fight that they gave the whole season, and even this game. No matter the result, I think a lot of life lessons learned and coming back next year, we’re not losing a lot of guys, we have a lot coming back. Like I said, the strides that we made this year, we’ll carry on and build up on those strides to carry them next year.”

For assistant coach Desireé Allen, it’s all about the kids.

“I am so glad I got to work with these kids, and some of them for four years,” she said. “They’ve been super loyal. I love them like they were my own kids. I will continue the rest of the year, whether it’s math or track or something. They just have to be successful in everything they do.” 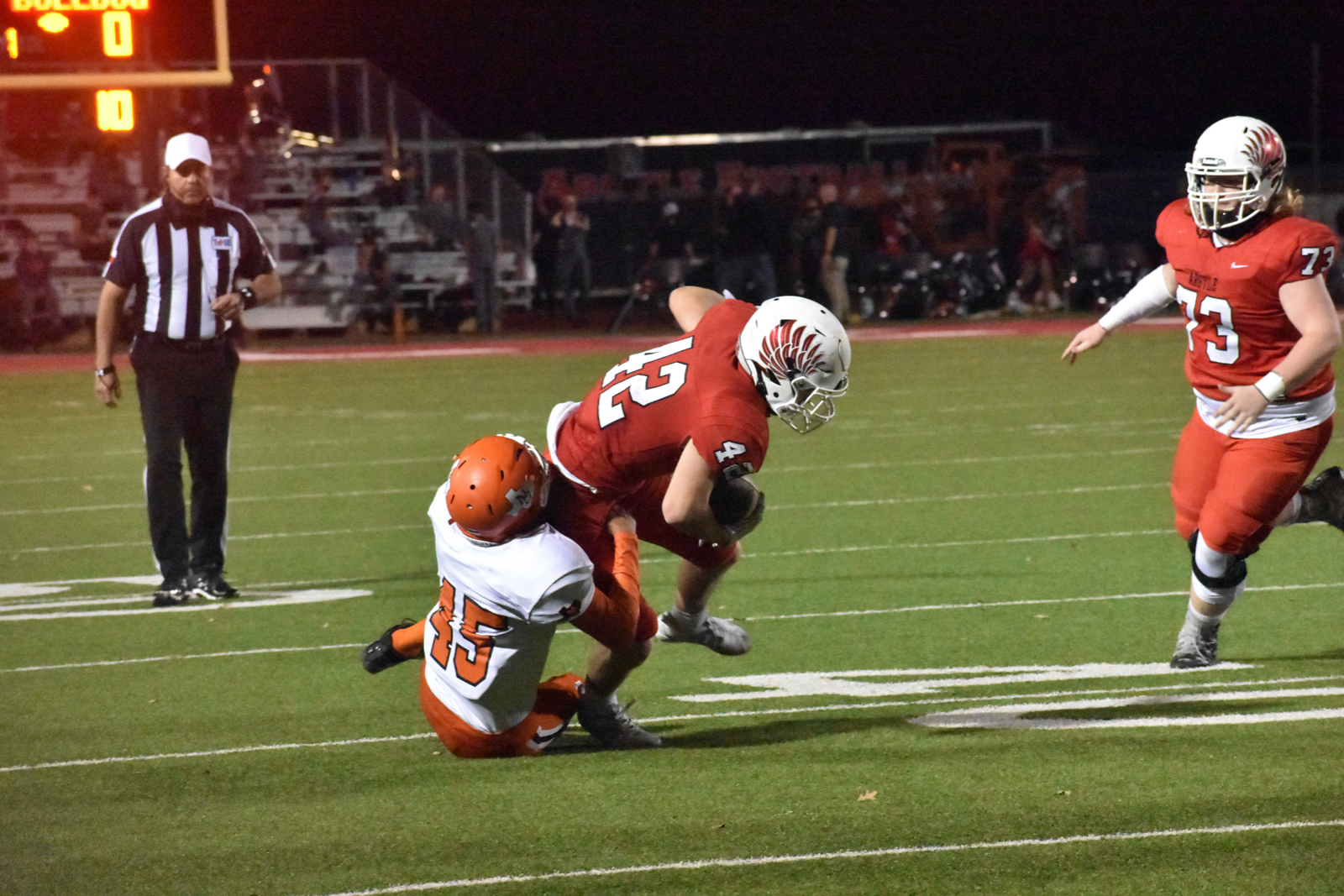 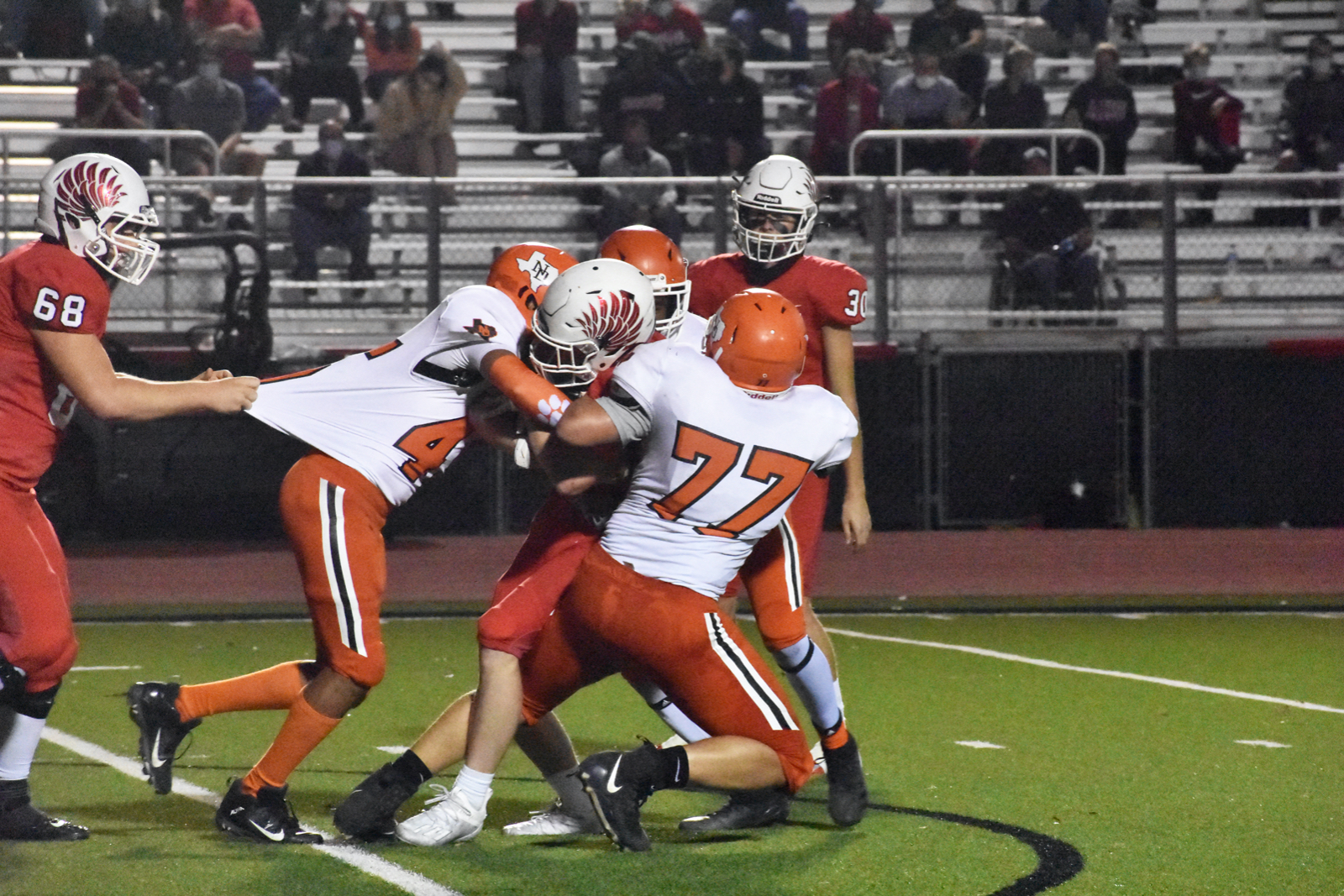 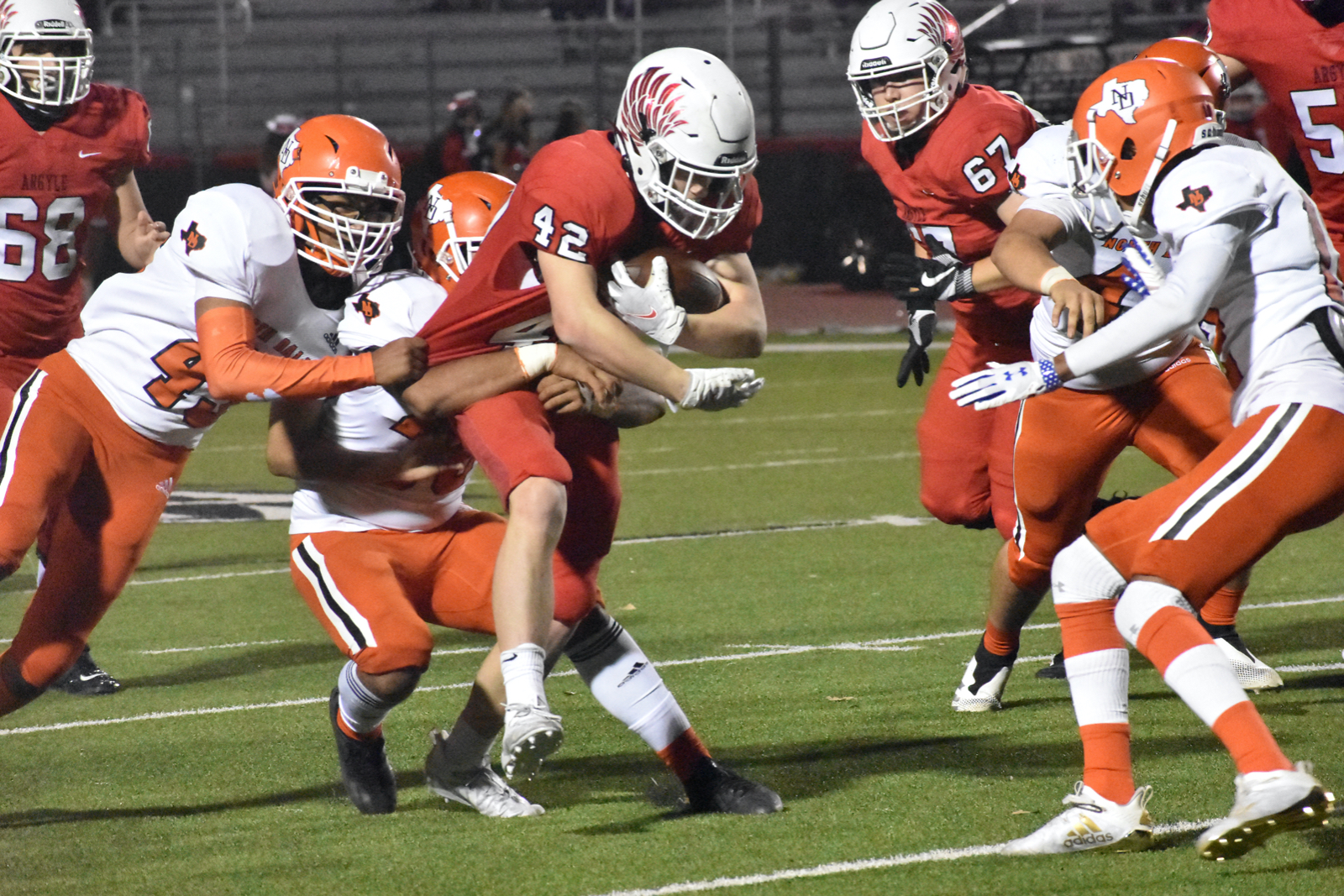 Kevin Crockett (45) and teammate hold on to Argyle ball carrier. 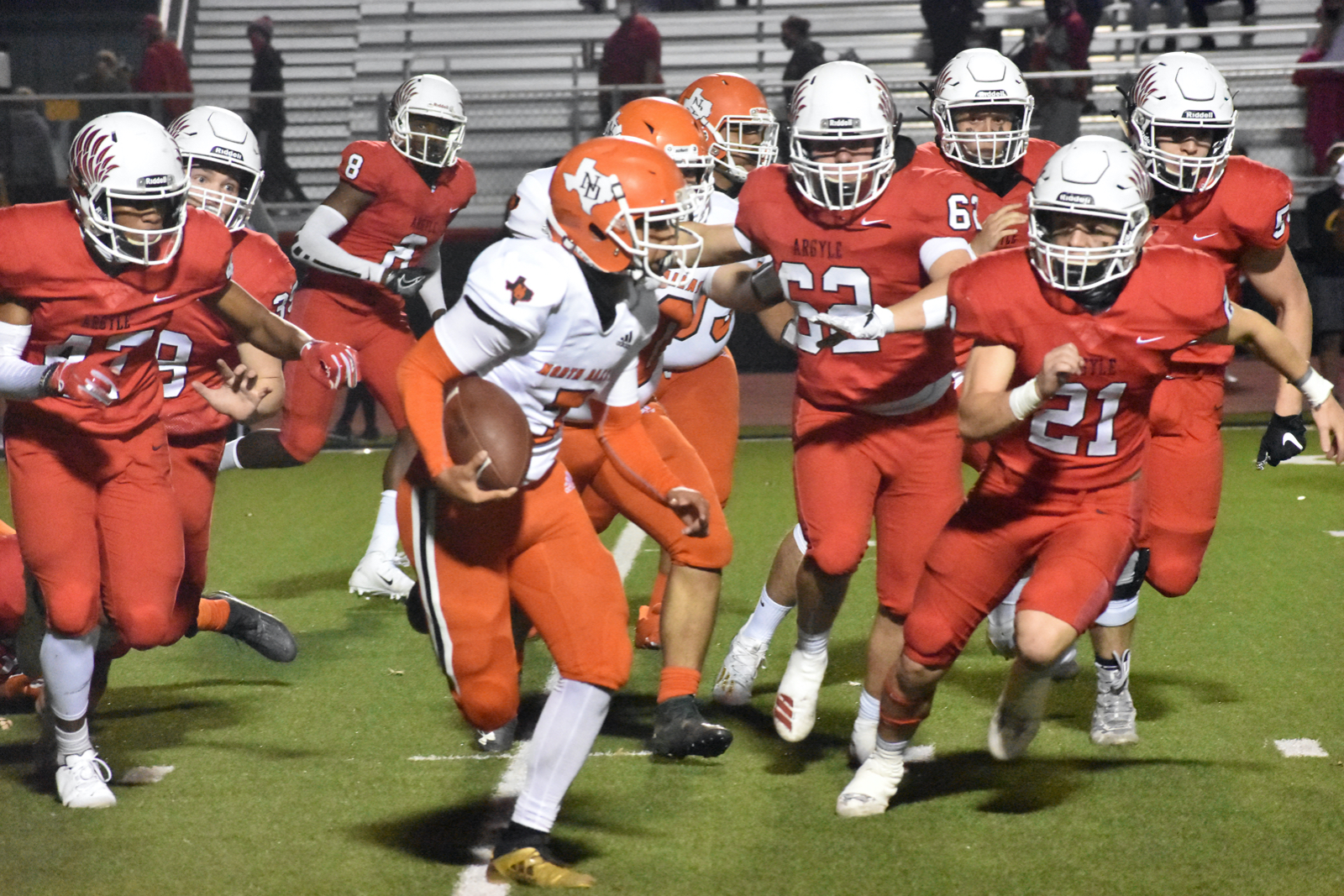 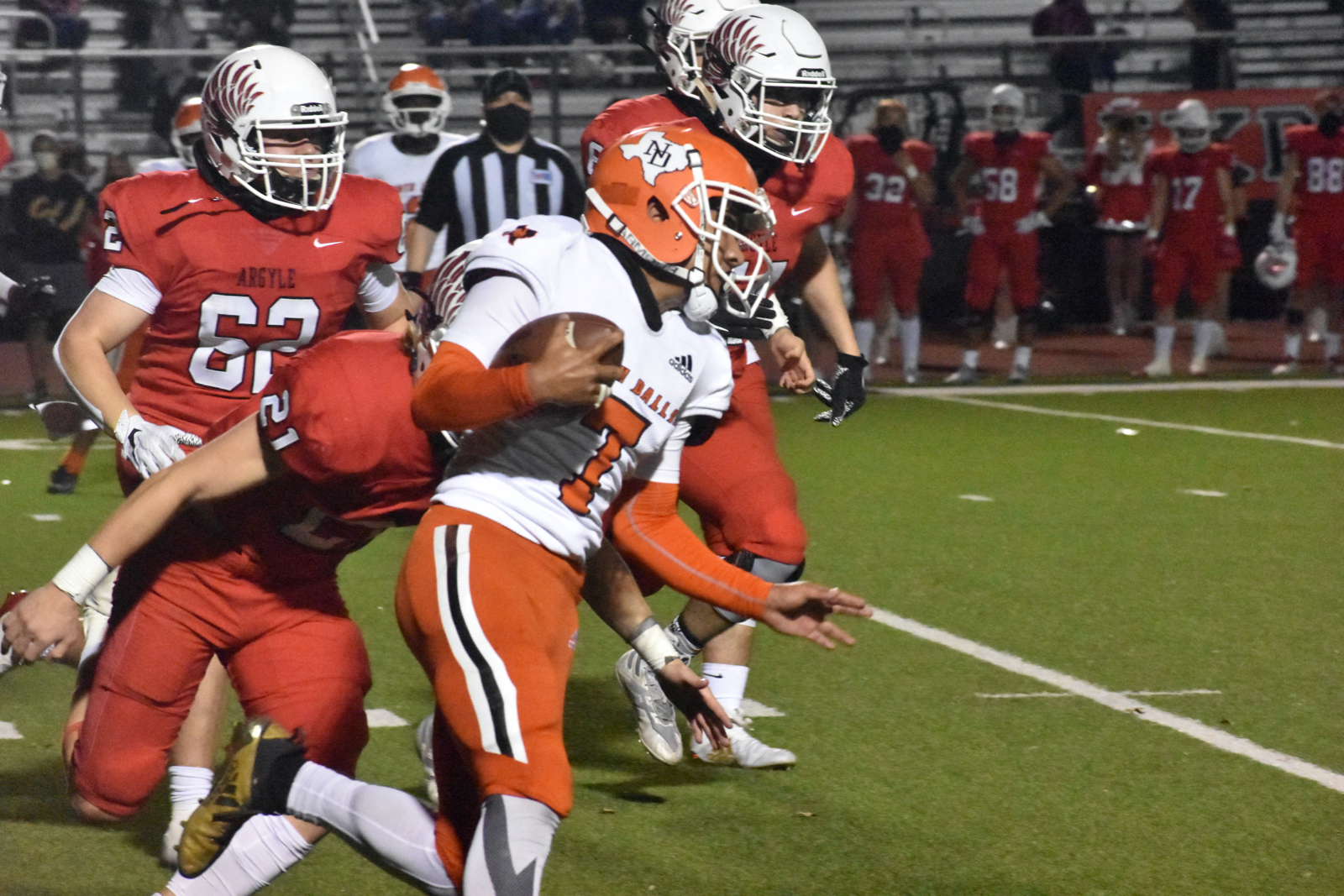 Jacob Chavez turns the corner before being tackled. 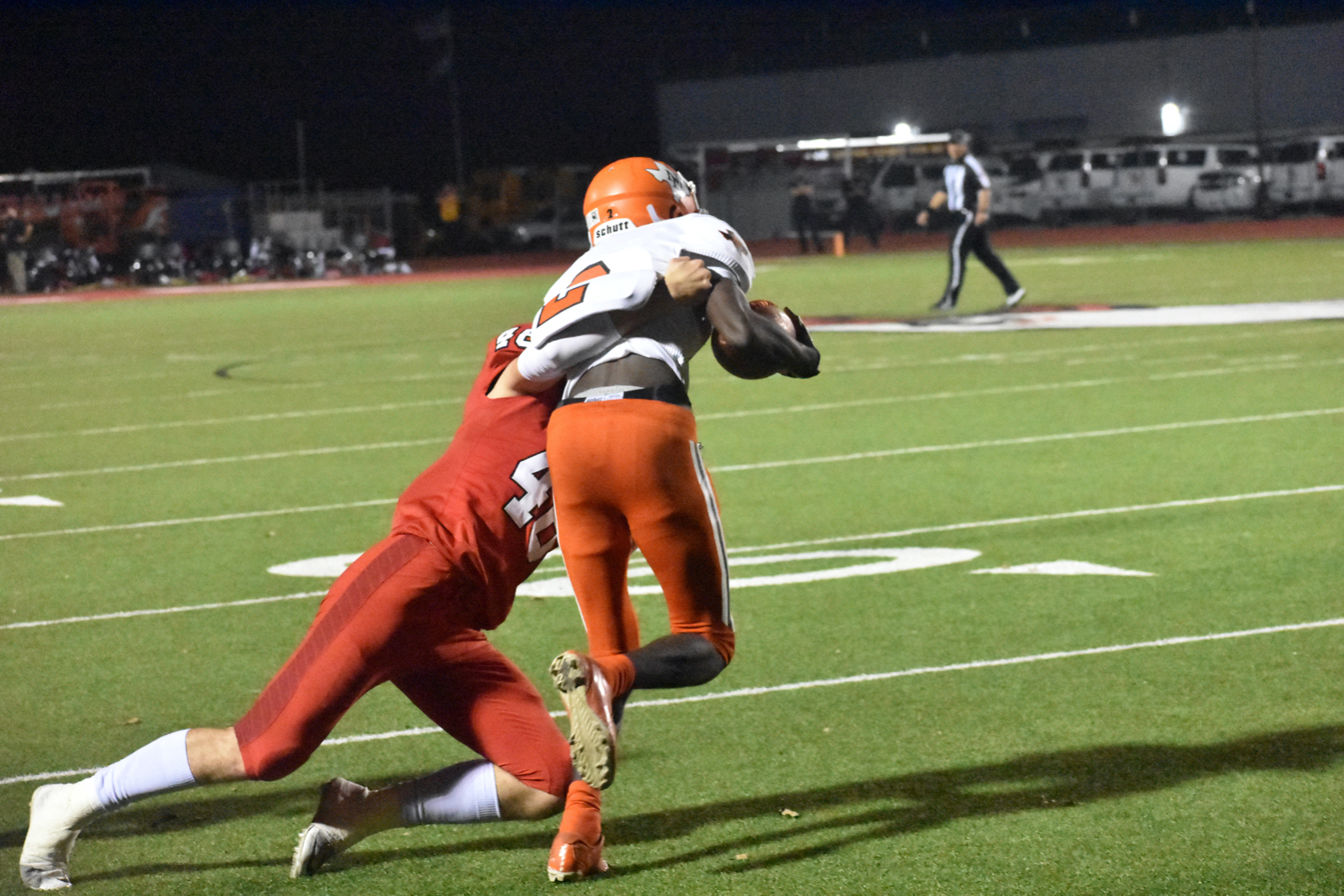 The Bulldogs’ Quincy Goldsmith (2) tries to slip past an Argyle defender. 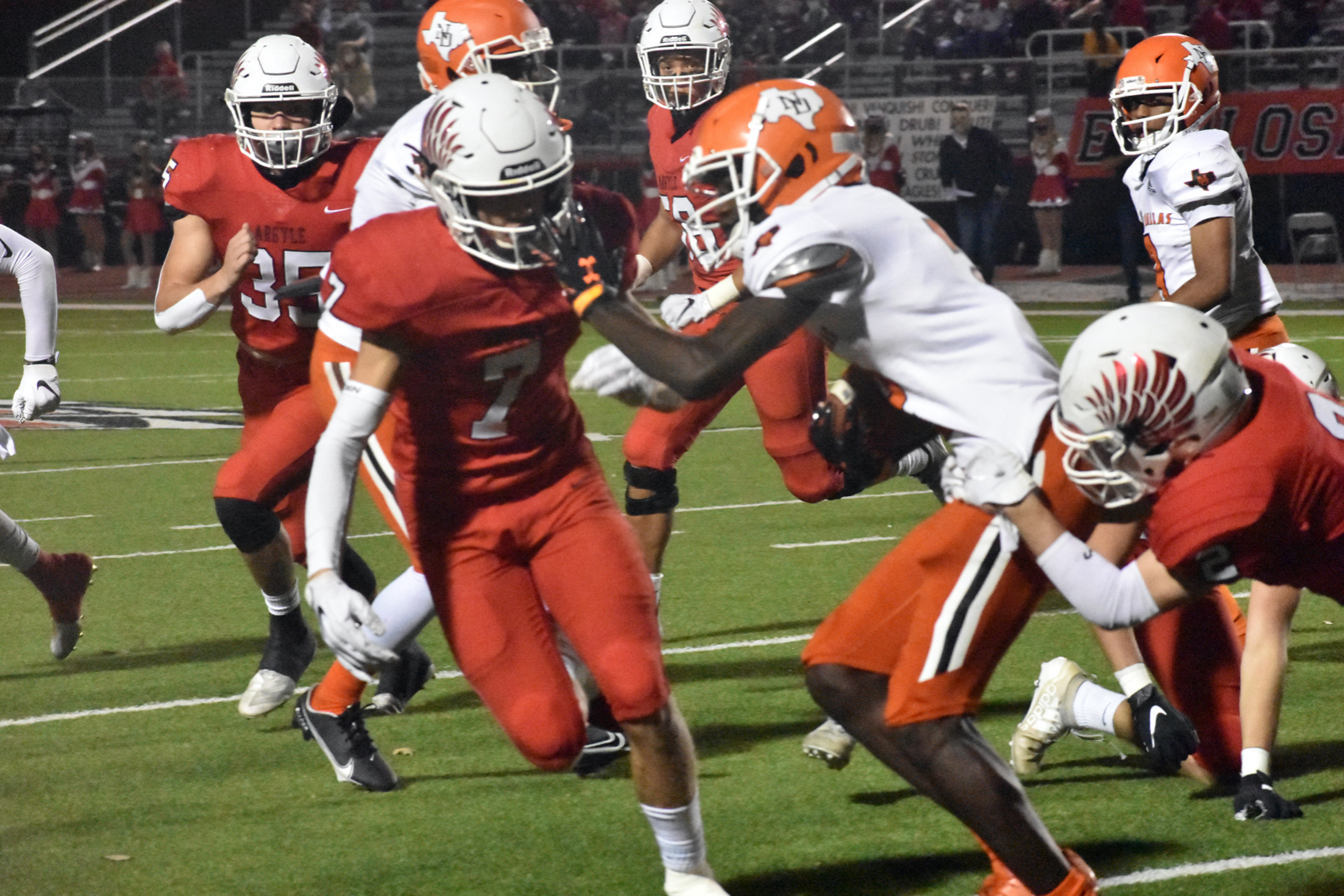 Quincy Goldsmith (2) battles for the extra yardage against Argyle. 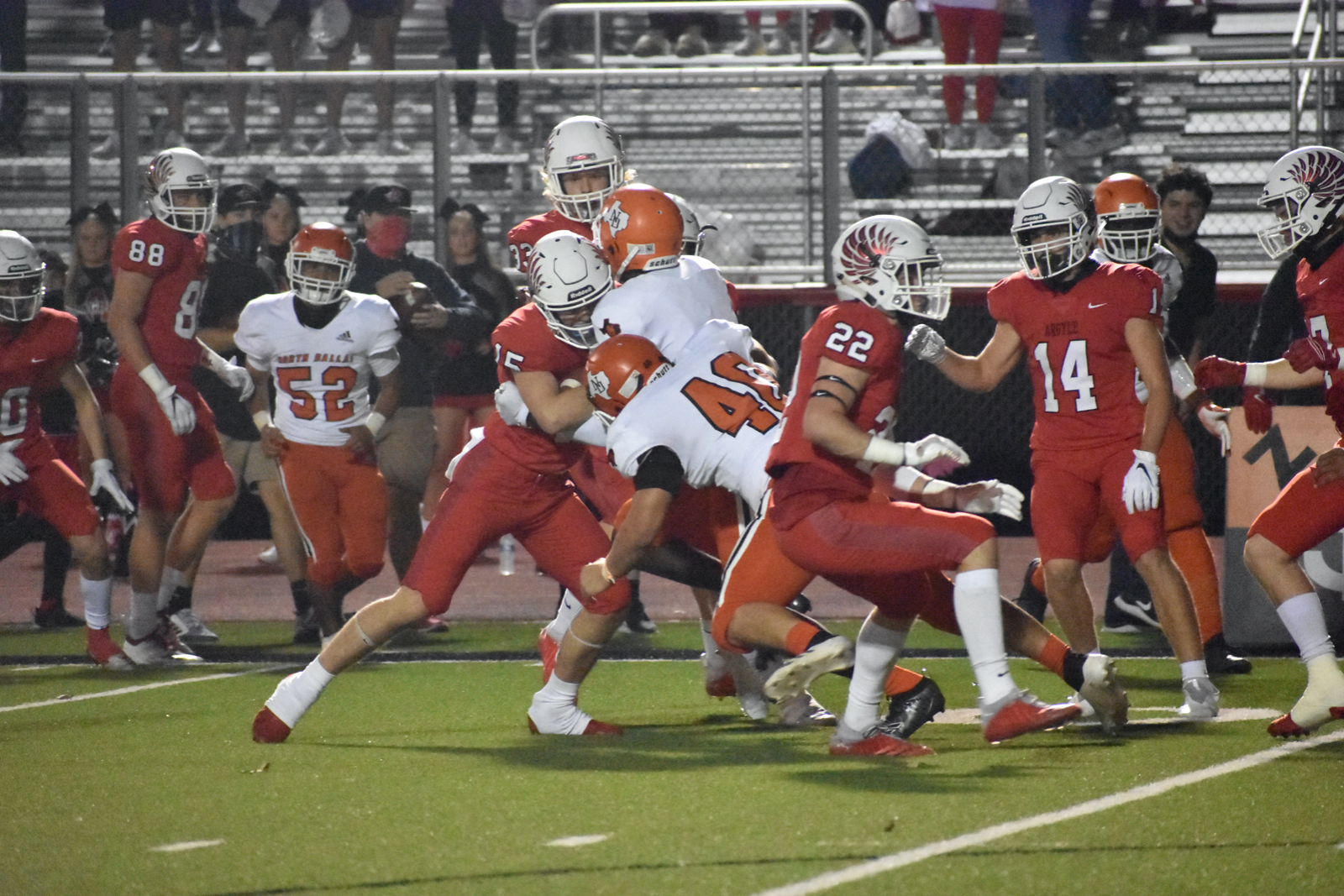 Argyle running back runs into the Bulldogs’ defense. 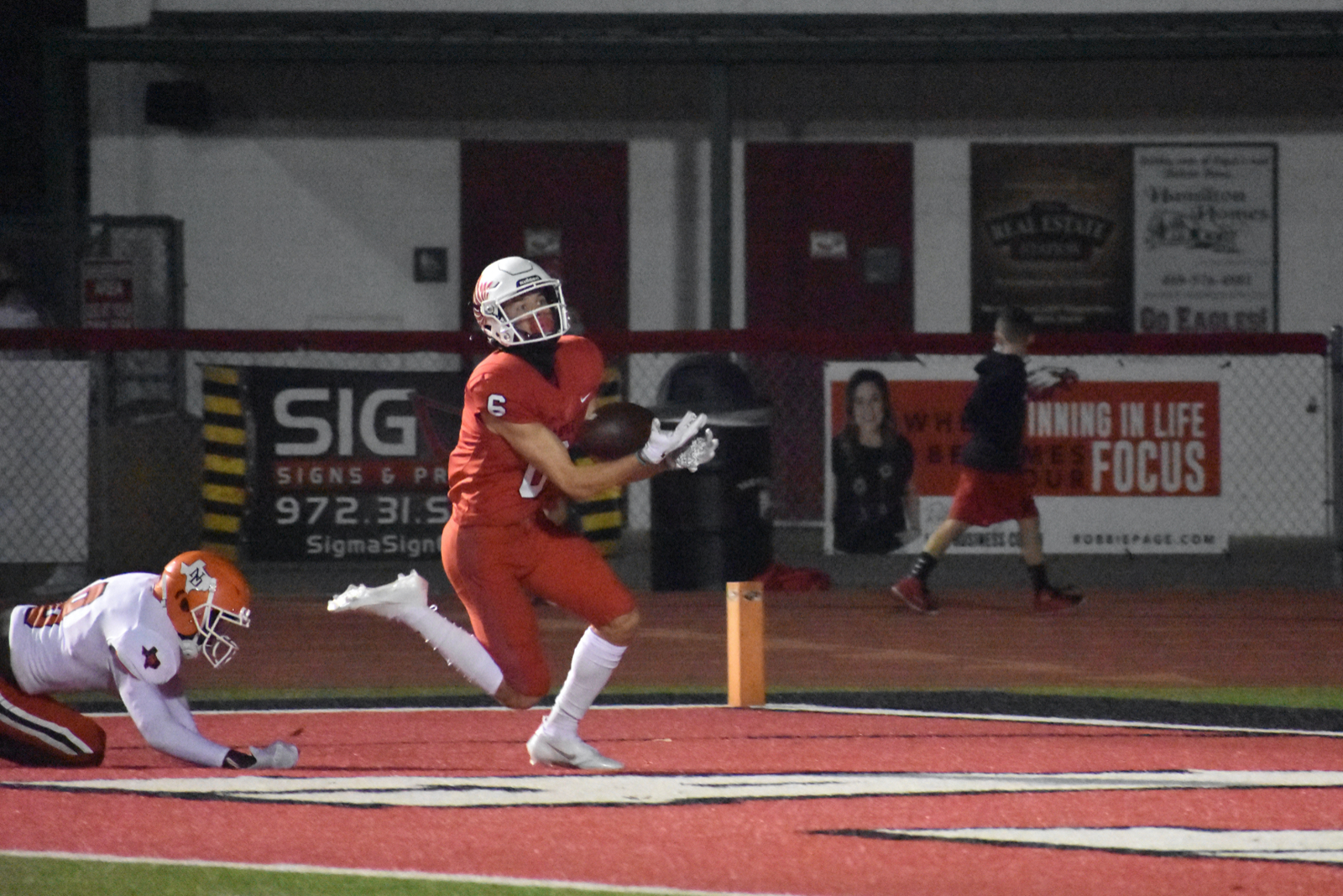 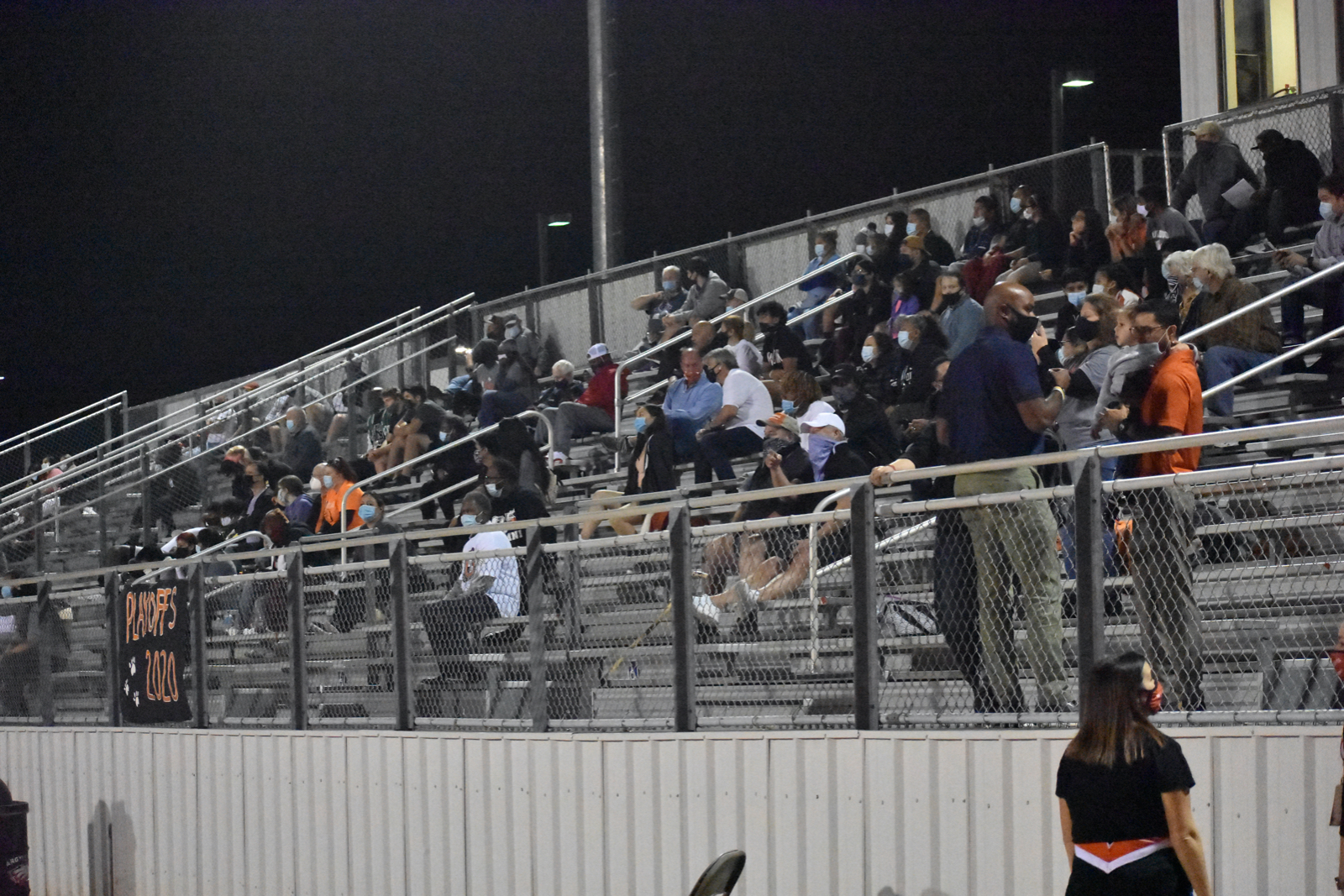 The Bulldogs had a good crowd on their side.