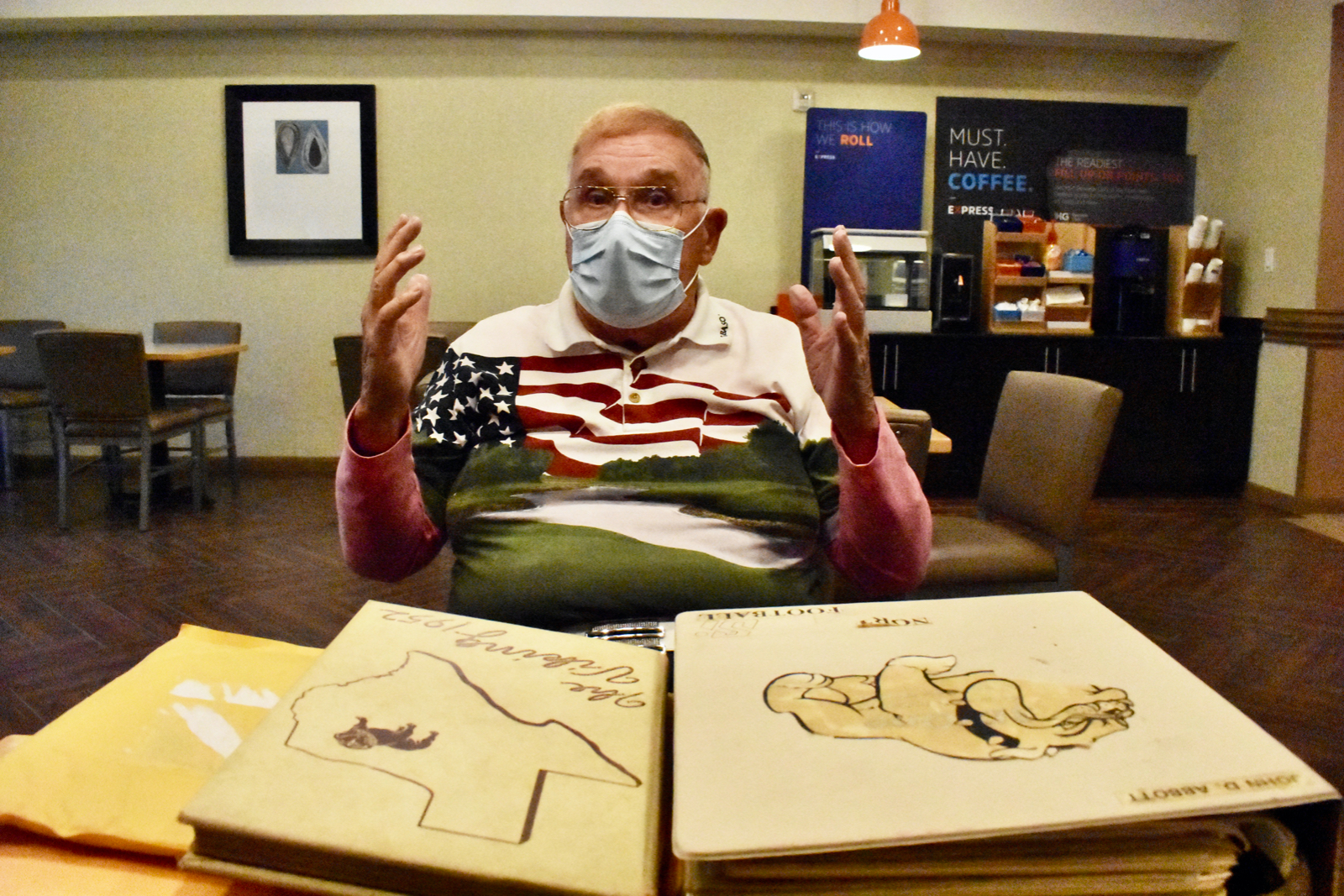 John David Abbott met recently at the Holiday Inn in Alvarado to talk about his playing days in the ’50s at North Dallas High School.

David Abbott enjoyed success on the football field at Spence Junior High before going on to North Dallas. During their time from Spence to North Dallas, Abbott and teammate Paul Delfeld won 34 football games, including the city championship at Spence.

In 1952, their first season at North Dallas, the Bulldogs went 9-3 and advanced to the state Class 4A semifinals against Lubbock, falling 42-14 at Texas Tech’s Jones Stadium in Lubbock.

Abbott was the starting right halfback for the Bulldogs, and said he was knocked out in the game against Lubbock. Delfeld played left halfback behind Ernie Manicchia in ’52. 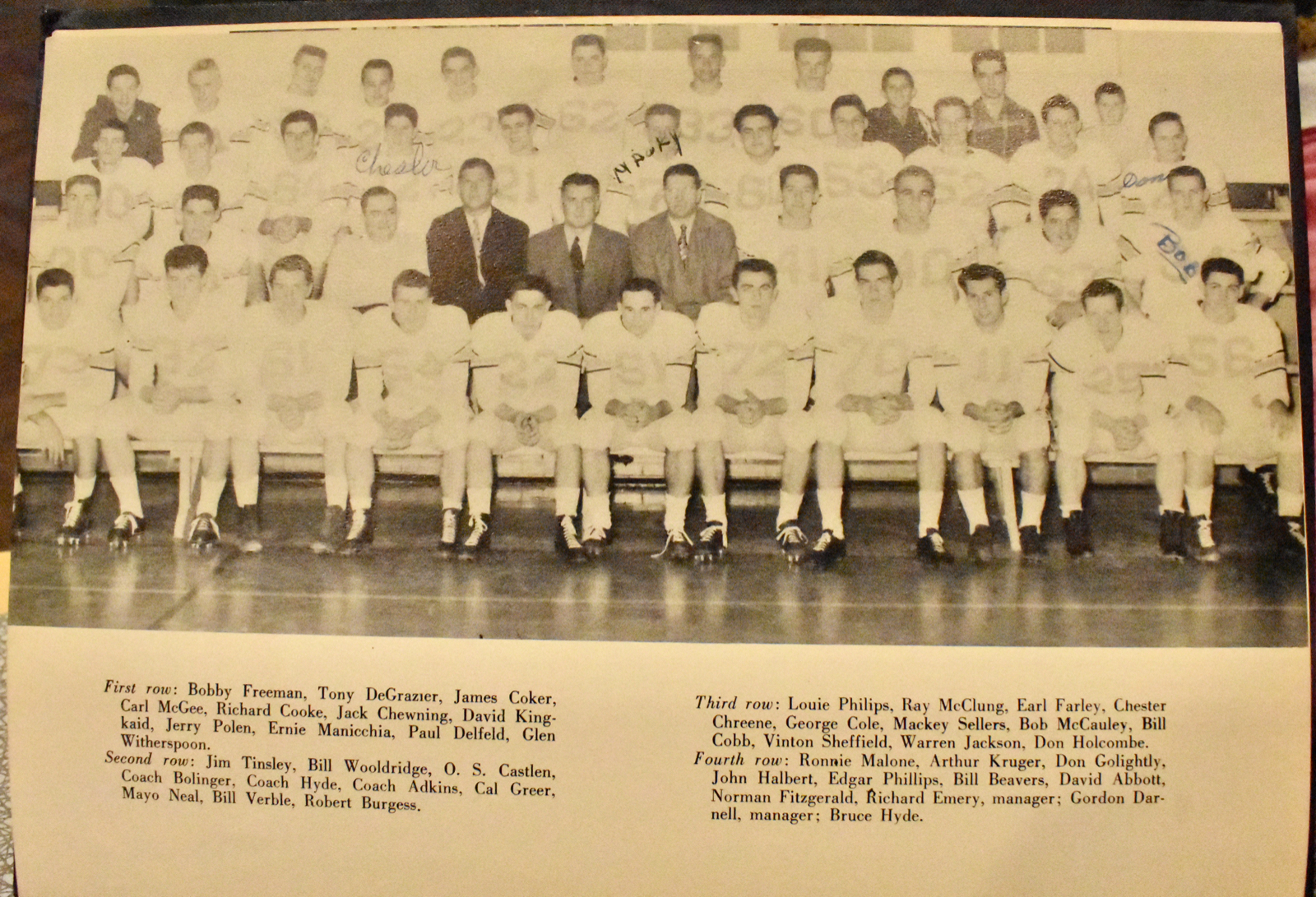 The 1952 Bulldogs football team that advanced to the Class 4A state semifinals. (Photo provided by David Abbott)

In 1953, Abbott was hurt in an early scrimmage and missed the whole season, while Delfeld had an outstanding season, earning all-state honors. The Bulldogs went 9-1 in 1953 and their only loss was to Woodrow 14-13. With the win, Woodrow won the district title. In those days, only the first place team advanced to the playoffs.

Sitting at a table at the Holiday Inn in Alvarado, Abbott recently recalled the fun times at North Dallas. The conversation ranged from swimming as a 6-year-old in the indoor pool at North Dallas to behind-the-scenes stories about the football team.

With North Dallas currently undergoing a major renovation, Abbott said he remembered the boiler room in the basement. That’s where the team stored its equipment in a storage room down there, he said.

“There’s no place else to store them. It was this. There was nothing for us,” Abbott said. “Everything was bulky; shoes, helmets, leather helmets, B-team wore leather helmets in ’52, the year I started. Except at North Dallas, they were real old, real white, beat up and painted white 10 times. But they weren’t that much worse than the Wilson helmets we had. We’re still getting concussions and face damage.” 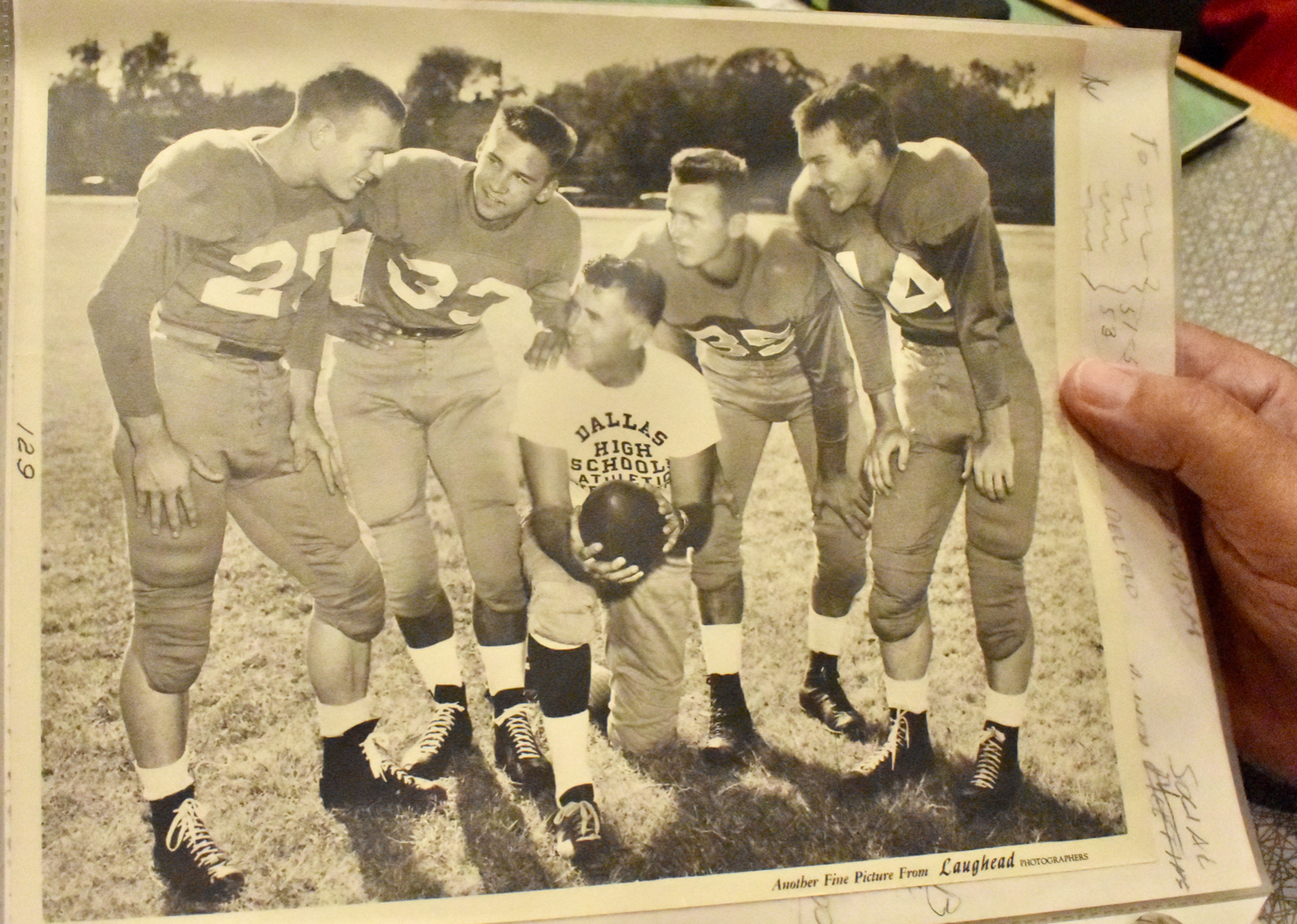 North Dallas football Coach Rufus Hyde would send the players down to the storage room to get their equipment, Abbott said.

“Hyde would sent us down there two or three at a time. You’d go down there, and Atkins would be up in there, or Croft… Croft did it one year … He’d look at you and say, “what’s your waist? You look about this size,’ and he’d throw some hip pads down.

Then let me see, ‘How tall are you? Here, I think these shoulder pads will fit you. And here, you need a couple of thigh pads.’

‘What size shoe do you wear?’ He’d look around and say, ‘Here take these.’ They aren’t 8, coach. And he’d say, ‘I know. Just take them to the dressing room and trade with somebody who has your size. And keep trading until you get the right size shoe.’

“If you had blisters, you’d put it on your blisters and all around. It made a thick coating of skin, like skin, the coating of jelly. It was hard,” he said. “You were supposed to wait for it to get hard. It probably took 15 minutes to get hard, so your blisters wouldn’t hurt. I never had time for that. I didn’t want to wait, so I put my socks over it. It still would heal up.

“The socks would heal up with it, but then I couldn’t get the socks off. It would be stuck, so you’d have to peel that off and peel off the blister,” Abbott said. “For Tony, it hurt too much for him to really play well.” 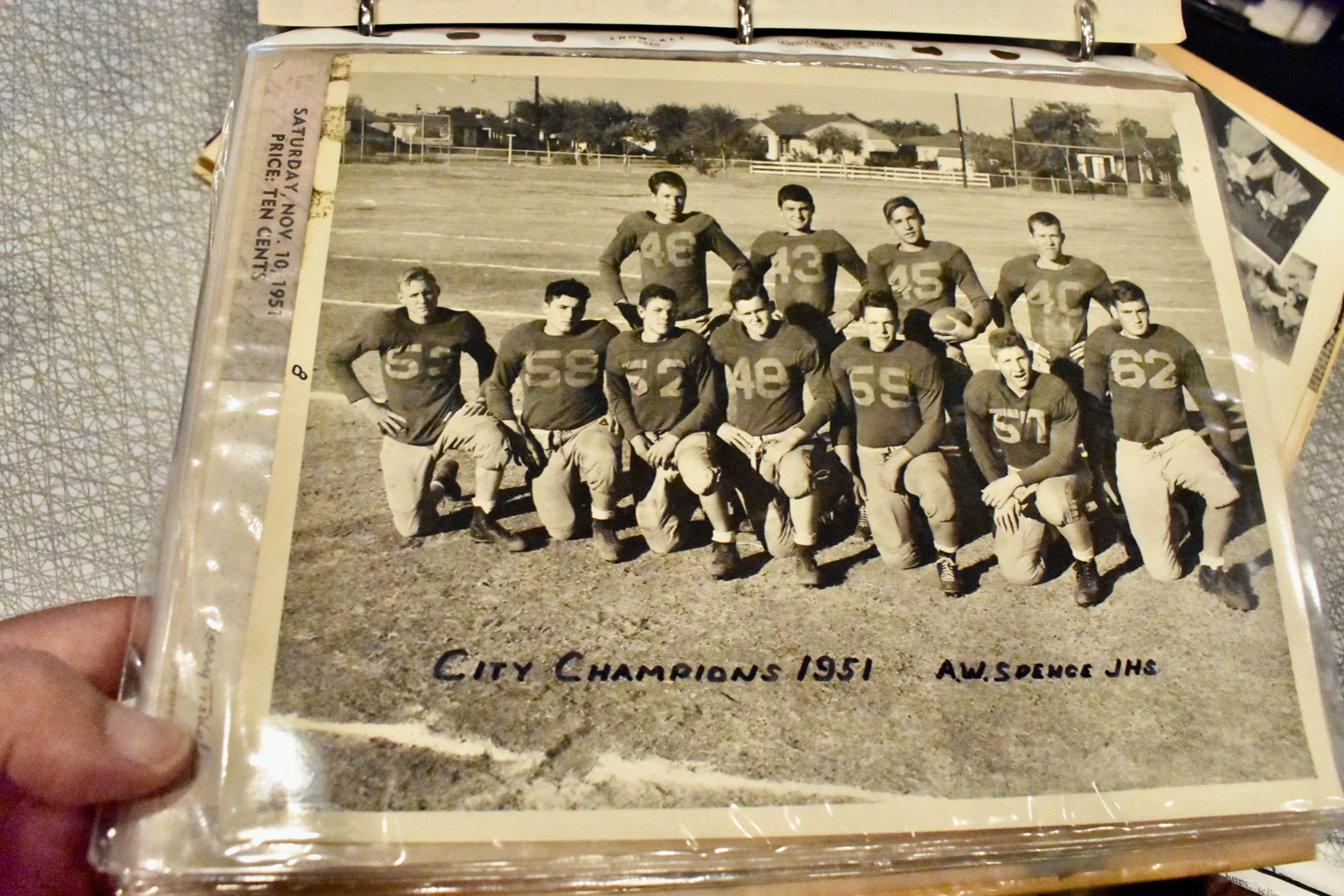 Most of the players on the 1951 Spence city championship team went on to North Dallas. Abbott is No. 45 and Delfeld is No. 40.  (Photo provided by David Abbott)

Abbott said the men’s locker room was better at Spence than it was at North Dallas.

“The old men’s locker room was tiny. Just had baskets. Had a grim shower in it,” he said. “Terribly humid. Coming from Spence, Spence had a little bit better thing. Actually, we had a place to put our clothes and hang them up. When we came over here, we just wanted to play ball. We didn’t care about the provisions of it.”

Abbott pointed out that the 1953 Viking yearbook was dedicated to the 1952 football team. 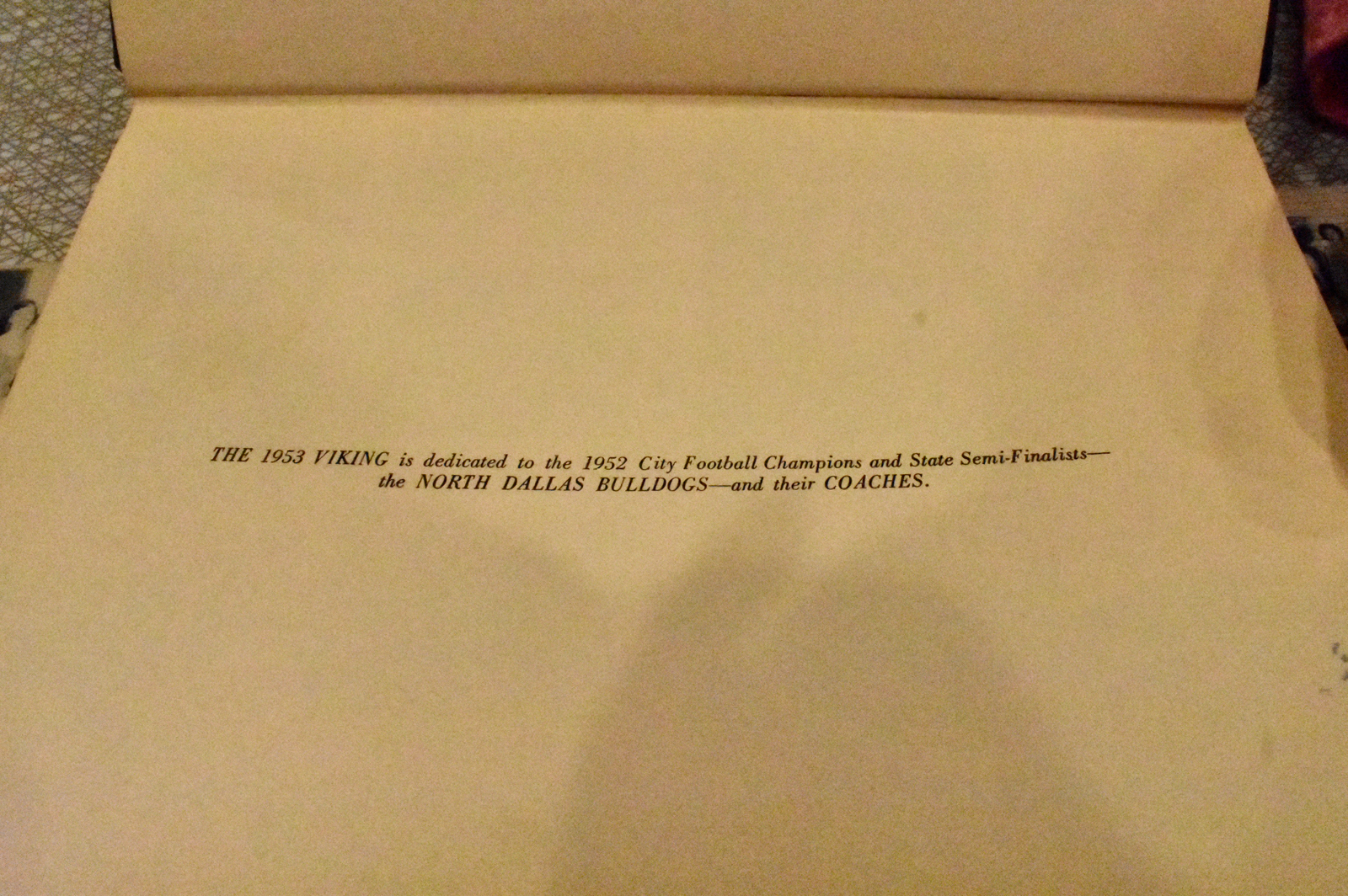 The 1953 Viking yearbook was dedicated to the 1952-53 football team that advanced to the 4A state semifinals. (Photo provided by David Abbott)

In looking at a photo from his collection, Abbott pointed out that the difference in carrying a football. 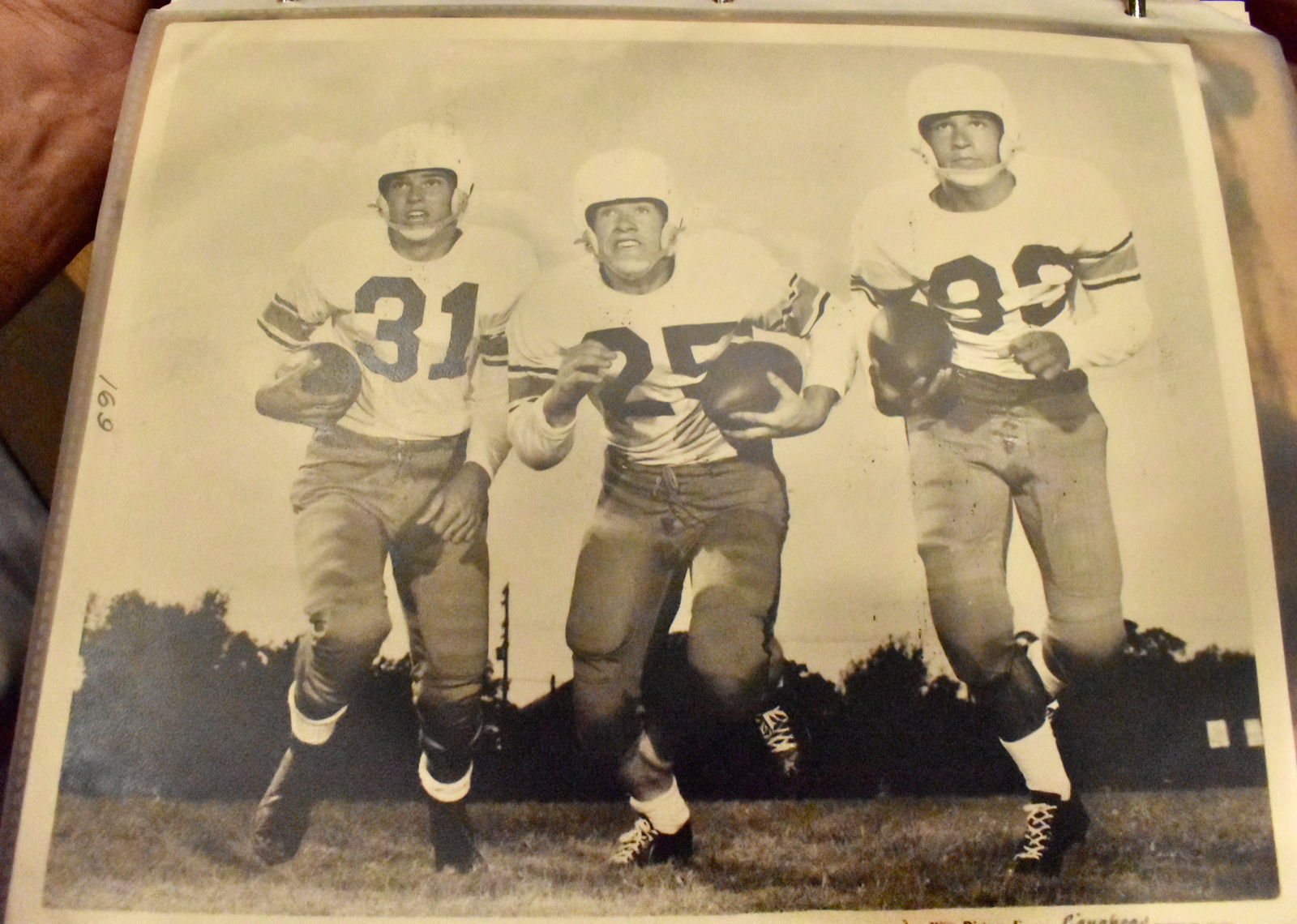 “I was the fastest guy on the team. Why was I faster than Delfeld? See how he carries the ball?” Abbott asked. “He has to carry it next to his body because his hands weren’t very big. I palmed the ball so I could swing both hands when I carried, but he couldn’t. He had to hold the ball here, so he couldn’t run as fast as I could. We were both dead even in track.”

Abbott pointed that in the spring 1953, the Bulldogs competed in a sprint-medley relay team, with Delfeld and Abbott running the 220, David Kingcaid followed and ran the 440, and Leslie Larson ran anchor and the 880. Together, they won the gold medal in 1953 at the Texas Relays, one of the biggest track and field meets in the state.

Abbott said over the years, he’s has five operations on his knees. He hurt his knee in an early scrimmage and was out for the 1953 season.

“I’ve had both of them replaced, that’s thanks to North Dallas,” he said, talking about his knees. “I had one finished off on the handball court, but it started in the Hillcrest game when I first got hurt.”

And while he couldn’t play, he could still run, he said.

“In 1953, I could run straight. I couldn’t cut. Running straight, I’m almost as fast as I ever was,” he recalled. “So, they’d go out and I would go out in my shorts. I would watch them work out. I couldn’t work out with them. At the end, they would have the wind sprints. The positions ran together. So I ran with the halfbacks, and I was faster than any of them. Even hurt. It’s a 40-yard dash.

“So at the end of practice, no matter how long or how tired, we would run wind sprints. And the guy who won the first race could go in. So we ran a 40-yard win sprint. I won, I wasn’t tired. So I ran around with them. I ran a second wind sprint, and as I got done, I wasn’t tired. I was going to run around with them again. So it occurred to me as I was doing it. Now, I’m vindictive. I’m mean. I’m the bad guy. I ran two more wind sprints with them. So after the fourth one, they were all giving me the evil eye. They couldn’t go in. They couldn’t go in unless you were the winner. I kept going around because I wasn’t tired. I kept finishing first. It was one of the dirtiest things I did. But that’s one of the fun things.”

Then Abbott recalled a story about his future wife, Lynette.

“So, this little girl here. In 1952, I started the fourth or fifth game of the season against Woodrow in the Cotton Bowl. And I played,” he said. “At the end of the ballgame, in the Cotton Bowl, mind you, this little girl came out on the field to tell me I played a good game. That was 70 years ago. We’re starting our 70th year together. We went steady for seven, eight years. So that’s what I did in 1953.”

The Abbotts have four daughters, two grandchildren, and five great grandchildren. David worked in sales. They left Dallas in 1969, and spent 13 years in Michigan. His last job was in Whitney, where he currently resides.

Abbott then held up a photo his girlfriend and now wife, Lynette lightfoot, who was one of the lead singers in the operetta at North Dallas. 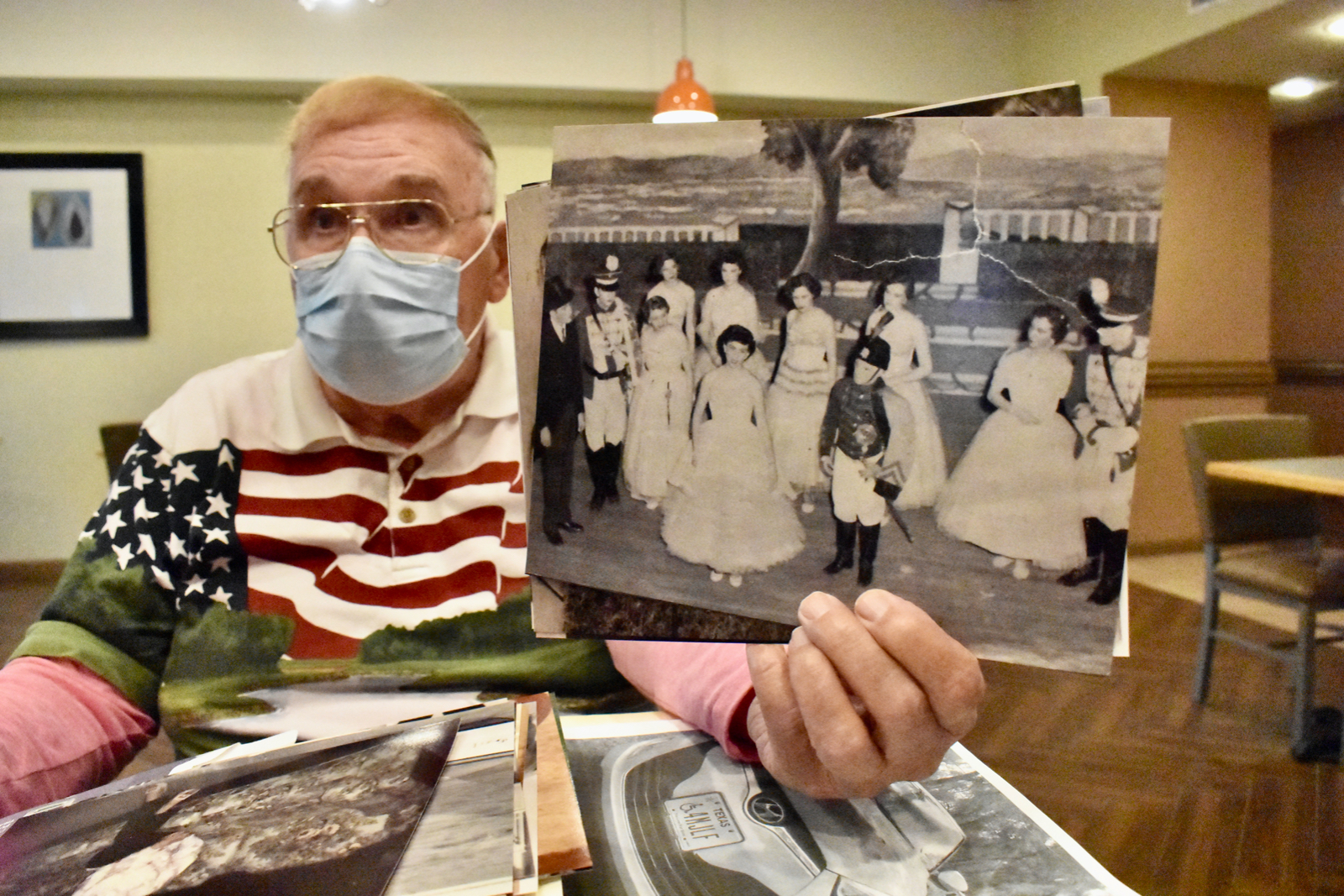 David Abbott holds up a photo of Lynette Lightfoot, who was one of the leading singers in the operetta at North Dallas. She went on to become David’s wife.

And that reminded Abbott of the 14-13 loss to Woodrow in 1953. Woodrow scored the go-ahead touchdown with 47 seconds left in the game.

“They scored on a throw-back pass against my position. If I been there, I would’ve run it back for a touchdown and we wouldn’t beat them 20-7,” Abbott said. “Unfortunately, I was sitting in the stands with my girlfriend. But it paid off, didn’t it.  She really takes good care of me.” 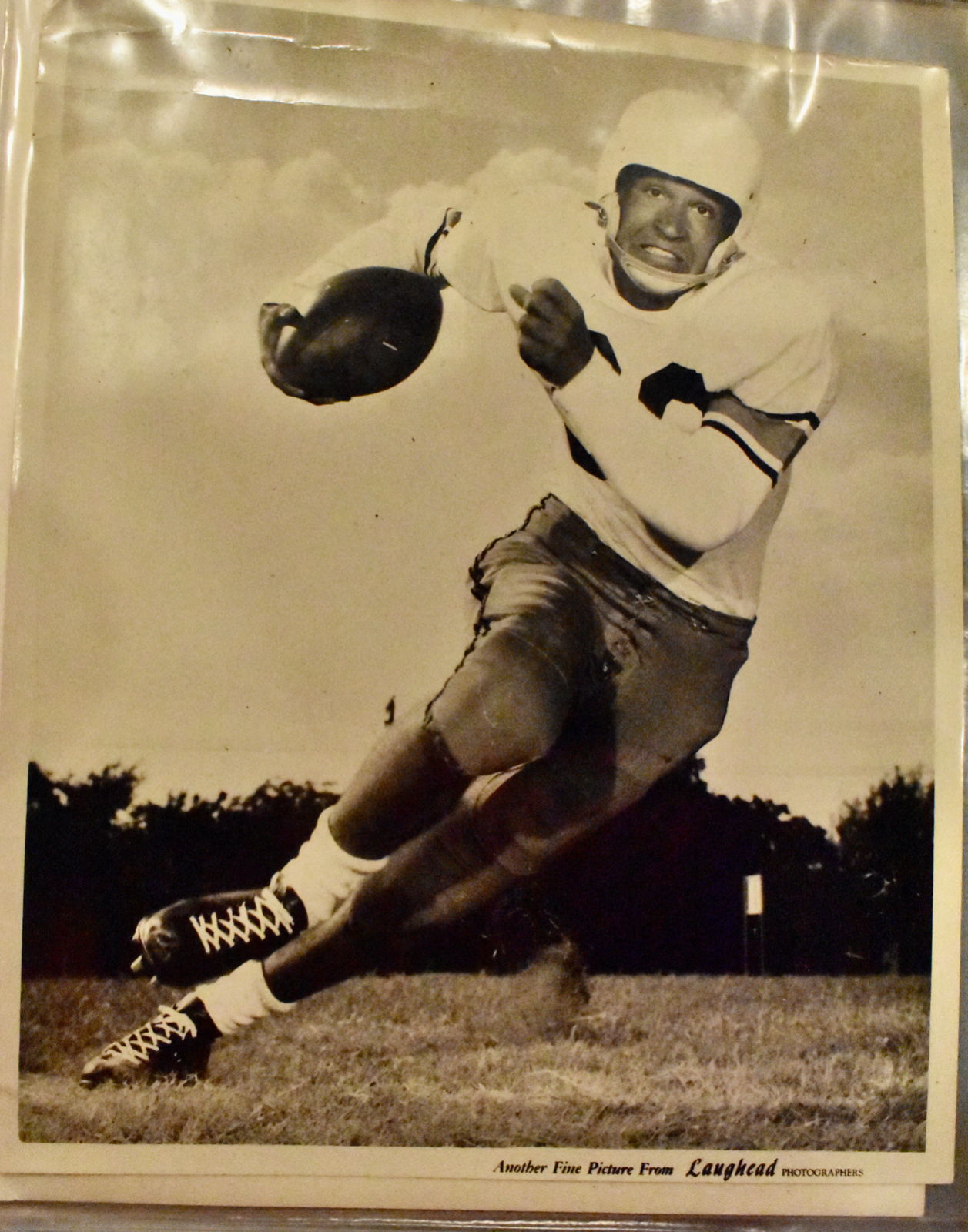 John David Abbott shows his running form before the 1954 season.

Abbott compiled a list of football things that only a North Dallas player could understand. Here is the list: