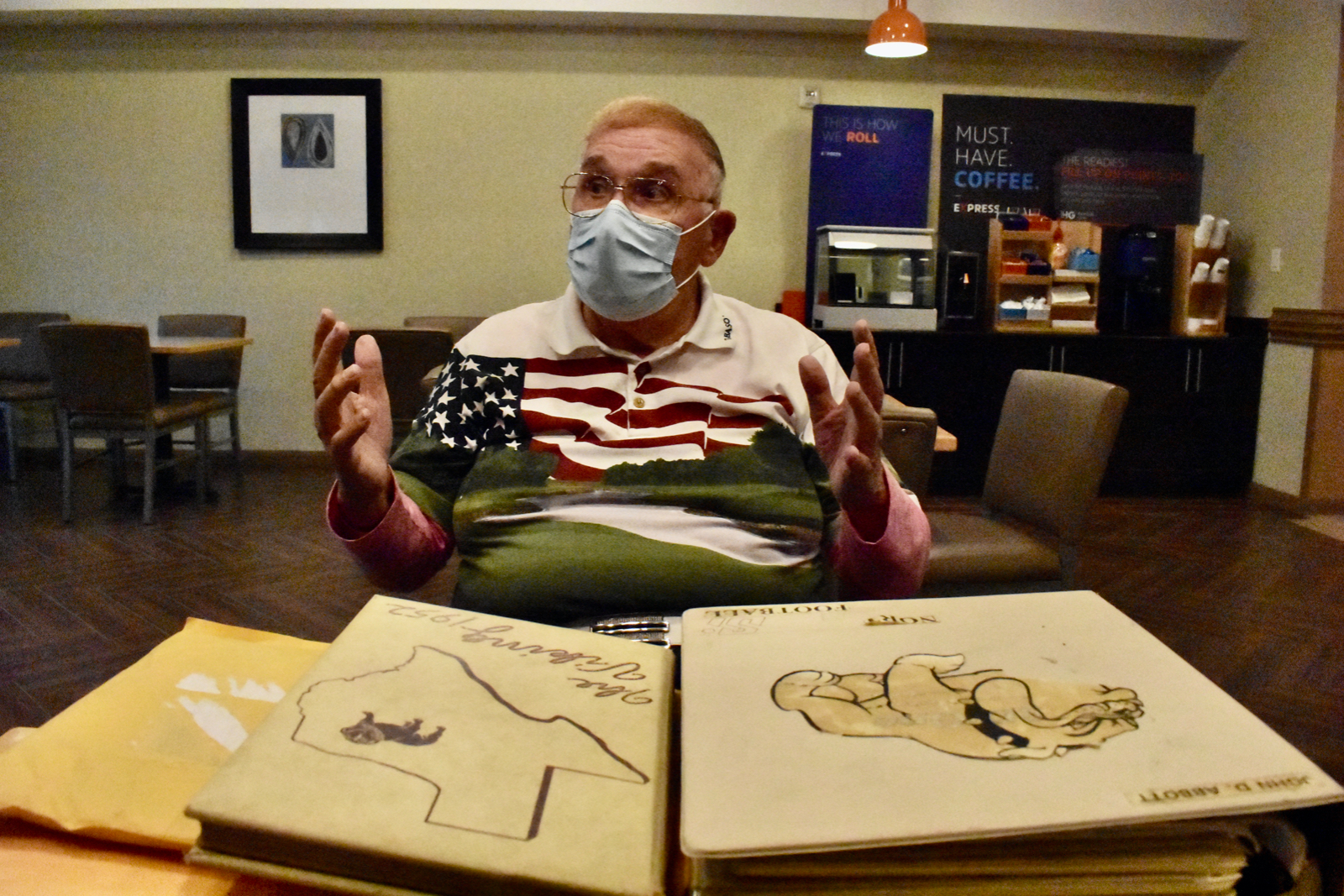 David Abbott recalls his days as a 6-year-old swimming in the indoor pool at North Dallas. Abbott, who lives in Whitney, Texas, met last month at the Holiday Inn in Alvarado to talk about life at North Dallas in the early 1950s.

John David Abbott may be 83 years old, but he remembers swimming in the indoor pool at North Dallas High School as if it were yesterday.

The year was 1943, and young David was 6. David lived on Travis street back then, but he said he wasn’t allowed to go through the unpaved alley, so he walked to Haskell and then up to the front of the school.

David was the youngest of three kids. He said he was “an accident” or “mistake.” His brother graduated in 1939 or ’40. His sister was even older than his brother. His given name was John David Abbott, but he went by David.

“I like David better than I did John. Everybody was name John,” he said.

In 1943, young David had a pass to swim in the indoor pool at North Dallas. The weather was hot, so David was always dressed to swim.

“It was open in the summer for kids that wanted to go swimming,” Abbott recalled in an interview last month.  “When it’s 110 degrees and I’m a little kid — I’m 6 years old — that’s when I started swimming at North Dallas. I was dressed to swim because it was hot.” 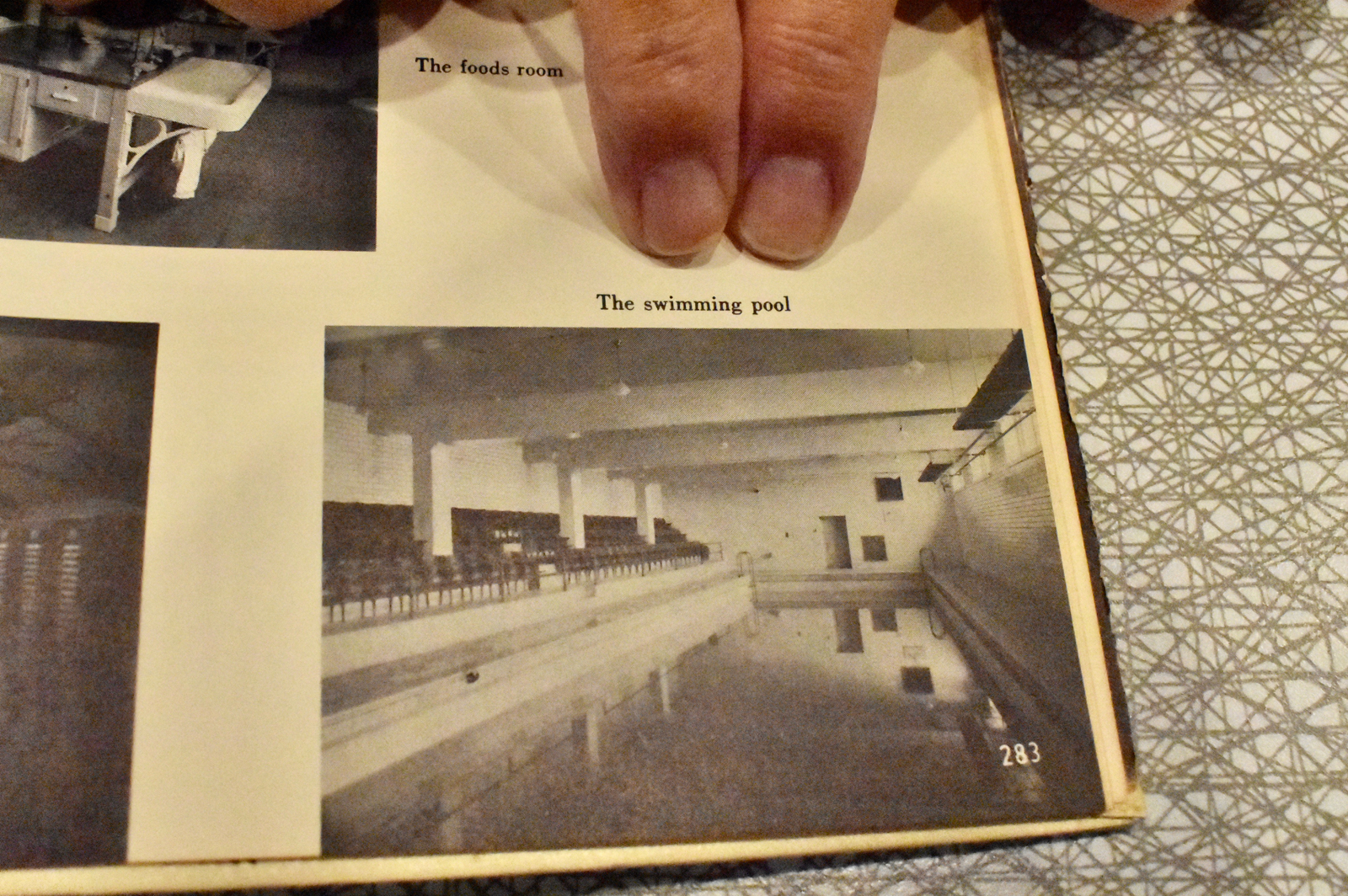 David Abbott shows a photo of the indoor poll from his 1953 yearbook.

Abbott recalled that the shallow part was 4 feet, and the deep part was 7 feet. He estimates the pool was about 25 feet by 100 feet long.

“The shallow end was a little less than 4 feet,” he said. “The reason I know that is because the first time they got me my first pass, I couldn’t quite stand up in the shallow end and breathe. I had to hang on to the sides.”

Abbott recalled entering the building through a back entrance.

“I always entered the building back here because the football guys all had lockers next to the workout room, so they could throw their books in there, go change clothes and go play football.”

As a young boy, Abbott remembers walking up and down the halls of North Dallas. There wasn’t anybody on his block who was age, so he often went alone.

“When I would finish swimming, I would come out of the swimming pool, walk down the hallway, and there was a closed fence,” he recalled. “A fence that you open and close – an accordion-type fence. It was lockable, but it was never locked. So, sometimes it was even open.

“So little David would walk the halls at North Dallas High School. Never did anything bad. No vandalism. All three stories. Walk quiet. Just looking around. Had shoes on. I did that for three years before I got my bicycle because I had nothing else to do during the summer and it was cool in there.

“During that time was the one time I got up on the roof. On the top of the third story, they had a set of stairs that they put in there to service the electric. At that time, it was just rungs on the wall, and I went up the rungs, and I looked up there, it’s not locked. Ok, I went up there, opened the gate and went up on the roof.

“That’s the things I did as a kid, so I knew North Dallas very well long before I went there.” 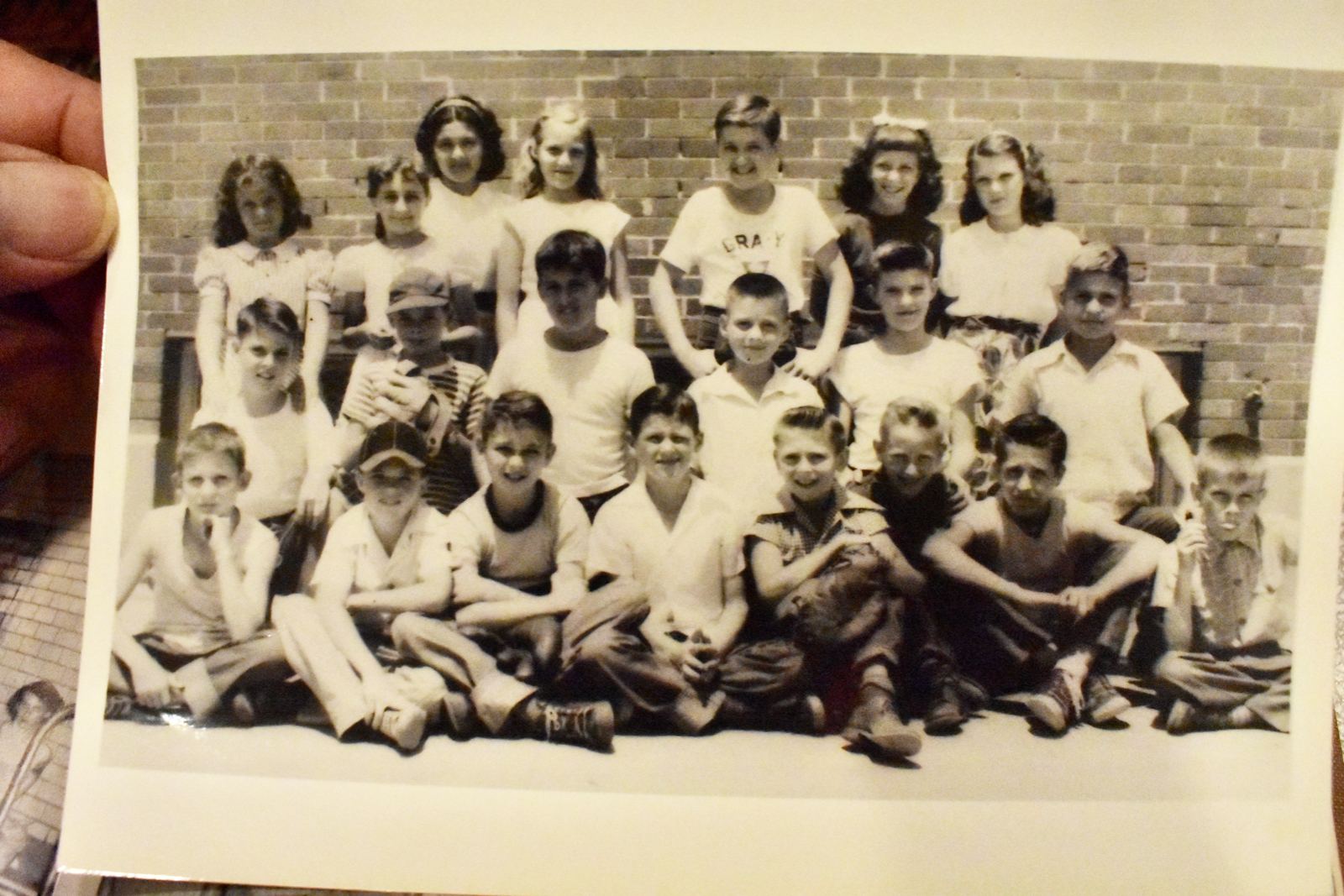 David Abbott is the last one on right side of second row in this May 1948 photo at Ben Milam Elementary. His friend, Billy Maples, is fourth one in second row.

Besides the ND indoor pool, Abbott also remember swimming outdoors at Cole Park, where it was “a madhouse.”

“At Cole Park, you had to have a buddy. And every 15 minutes, they’d blow a whistle and you had to get out of the pool and grab your buddy and say, “Yeah, he’s still alive. Neither one of us drowned.’” Abbott recalled with a laugh. “And the pool was 3 feet deep. That was irritating. Ruined my fun. But I had people my age to play with at Cole Park. It was a madhouse.”

Cole Park wasn’t “open consistently because they had to fill it up and empty it every time because there was no filtration,” Abbott said.

Abbott attended Ben Milam Elementary, then Spence Junior High and went to North Dallas in 1952. He played right halfback on the Bulldogs’ playoff team that advanced to the state Class 4A semifinals against Lubbock. 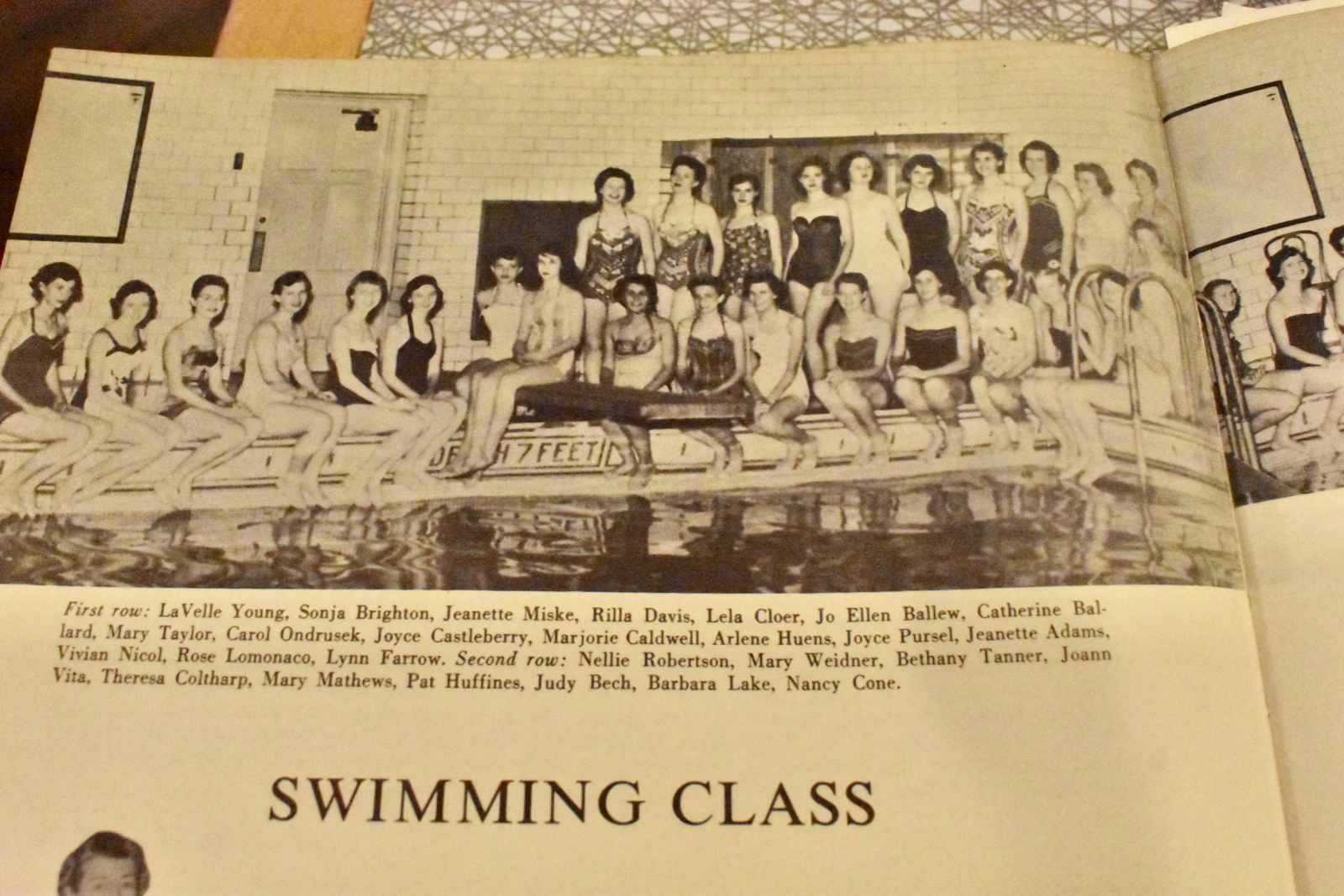 Only the girls swam at North Dallas when David Abbott went to ND in 1952. This photo shows the pool was 7 feet deep and there was a diving board.

Abbott also ran the 220 in track & field, and after meets on Saturdays, he sometimes opened the doors for his teammates to go swimming.

“When I got to North Dallas, men couldn’t swim in the pool. They never had a man swim from ’52 on that I know of. They just had the women,” Abbott said. “So, I knew all about how to get in. I would go check the door and if it was locked, I would go down to the women’s side and check the door. And if it’s locked, I would go into the women’s dressing room. Remember, there’s nobody in the school. We’re there just to put our clothes back on and leave our track uniforms at the school.

“So I went through the women’s dressing room to get into the pool and open the door and the whole track team would swim with me. We’d swim anywhere from 10 minutes to an hour. Until Burl Hayes, wherever he was at in the school, would finally hear us having fun in there and come and run us out. A couple of times, he just didn’t have the heart because we had done good. ‘Hey, y’all need to get out of here. I didn’t give permission to do this.’ So that’s how I got to swim when I was actually at North Dallas.”

And there was this story:

“We had a little hole cut in the middle of the [women’s dressing] door, so we could look through there and see the girls in some state of undress. That was one of the little funny things that we did.” 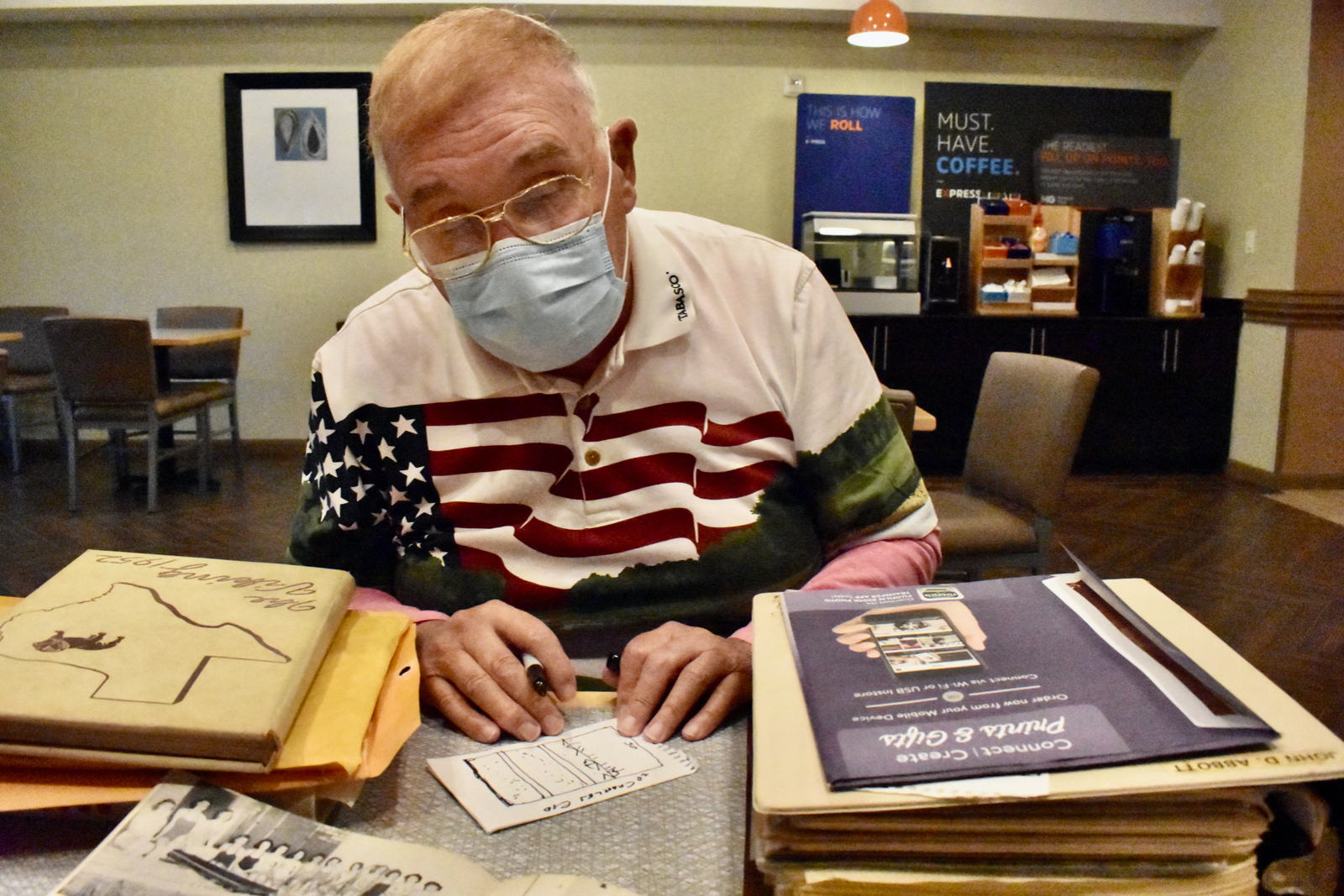 David Abbott draws a map of where the pool was inside North Dallas, and where he roamed during his days as 6-year-old. 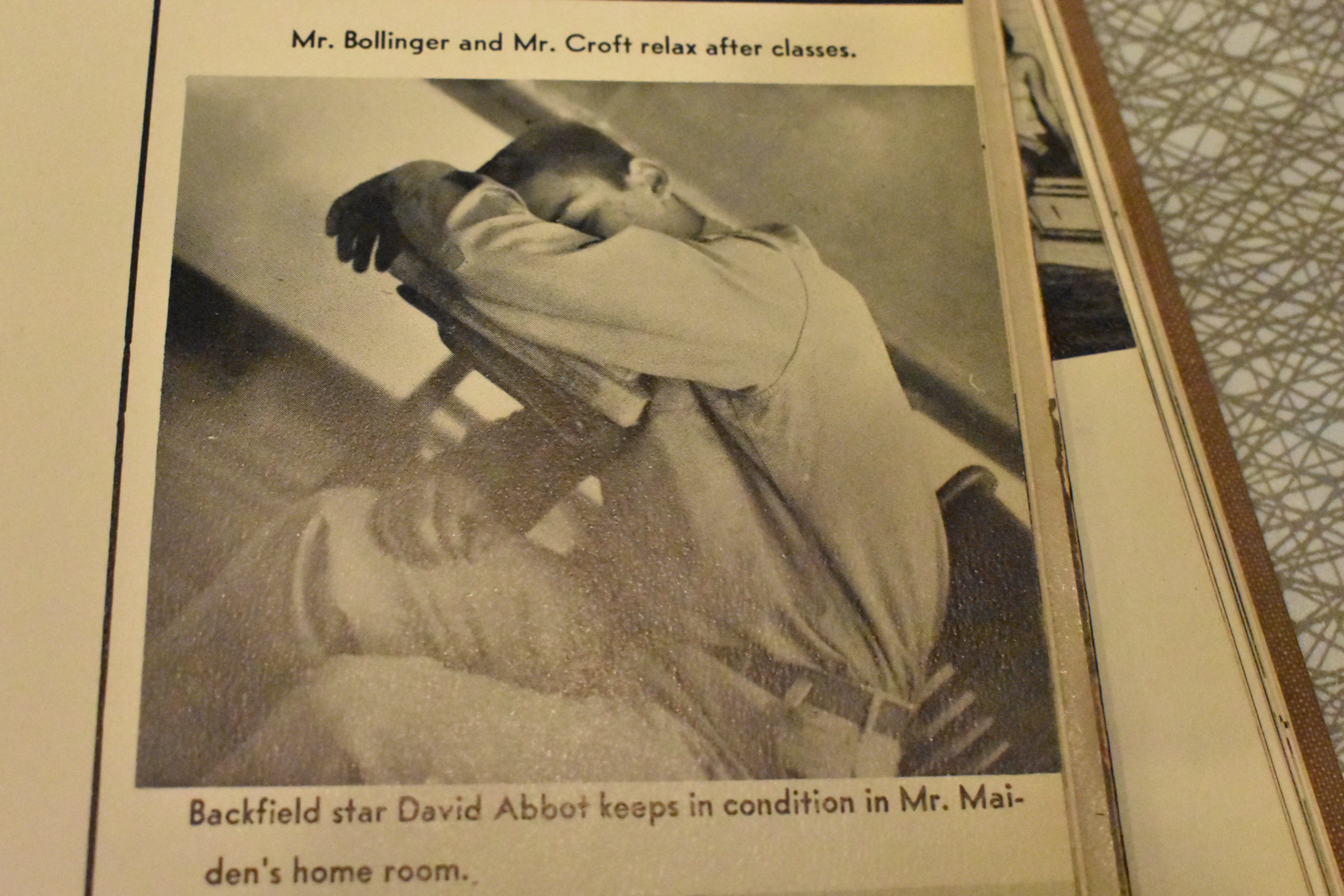 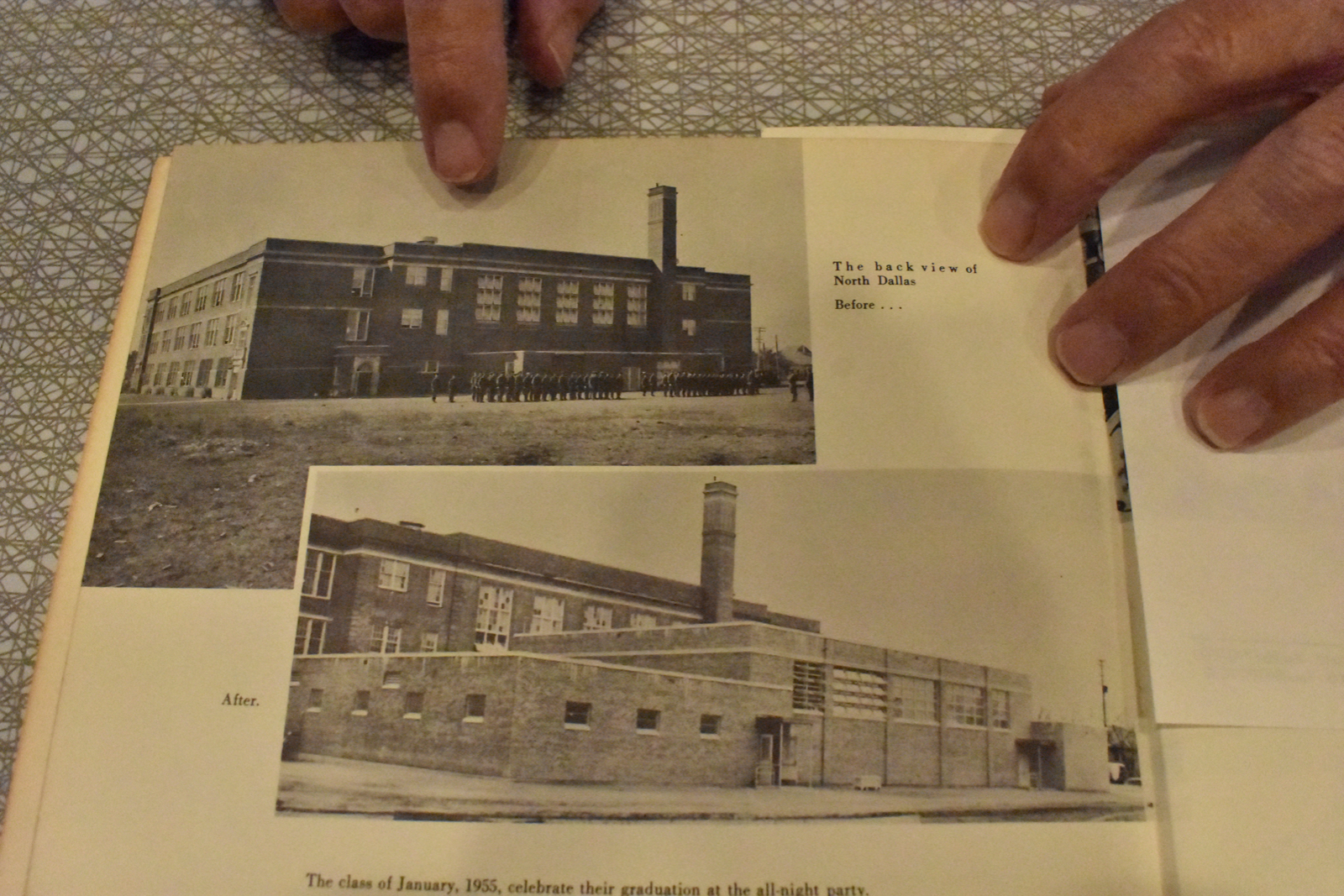 David Abbott says the indoor swimming pool was taken out and the boys gym was added while he was at North Dallas.