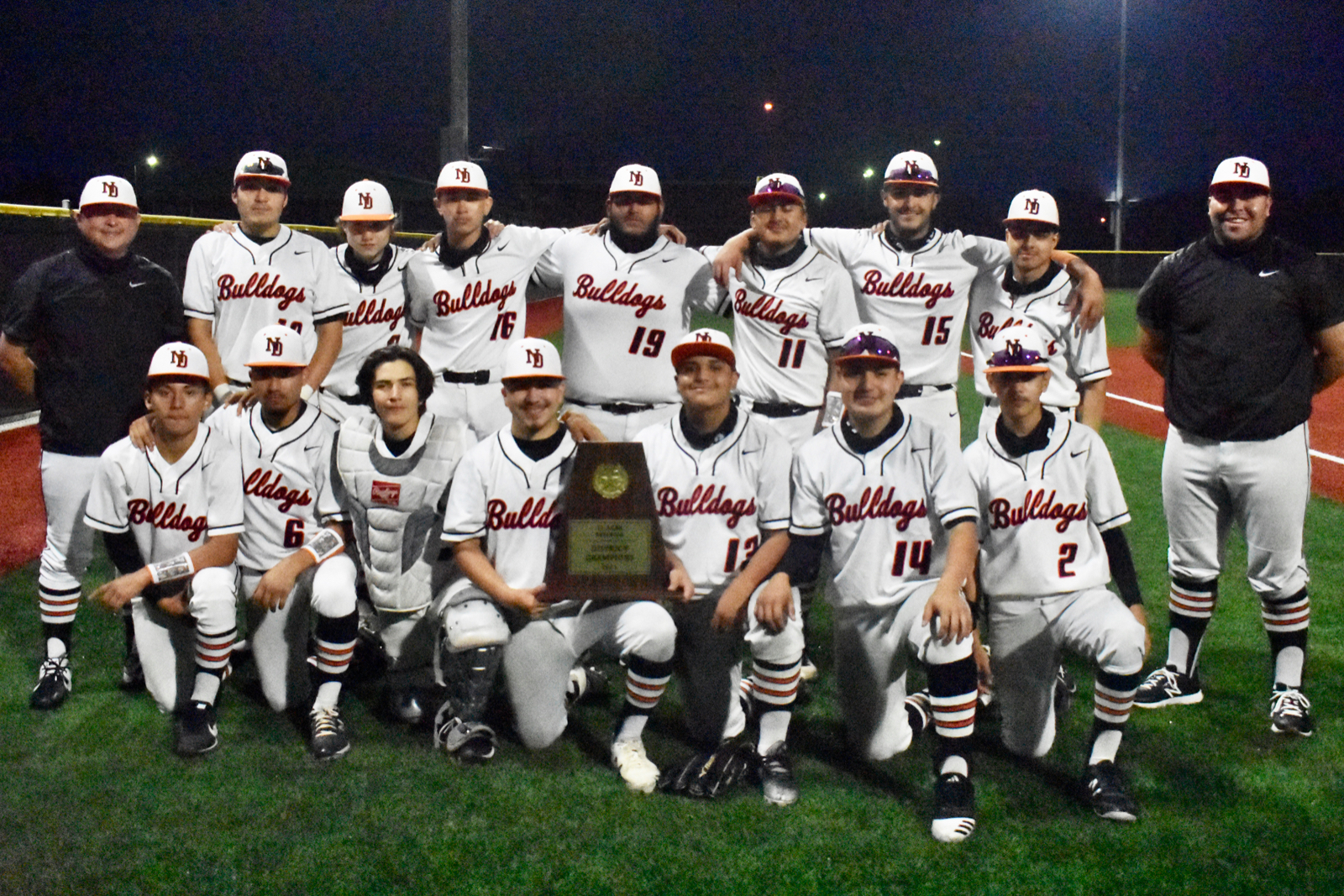 The Bulldogs’ team photo with their District 12-4A trophy. 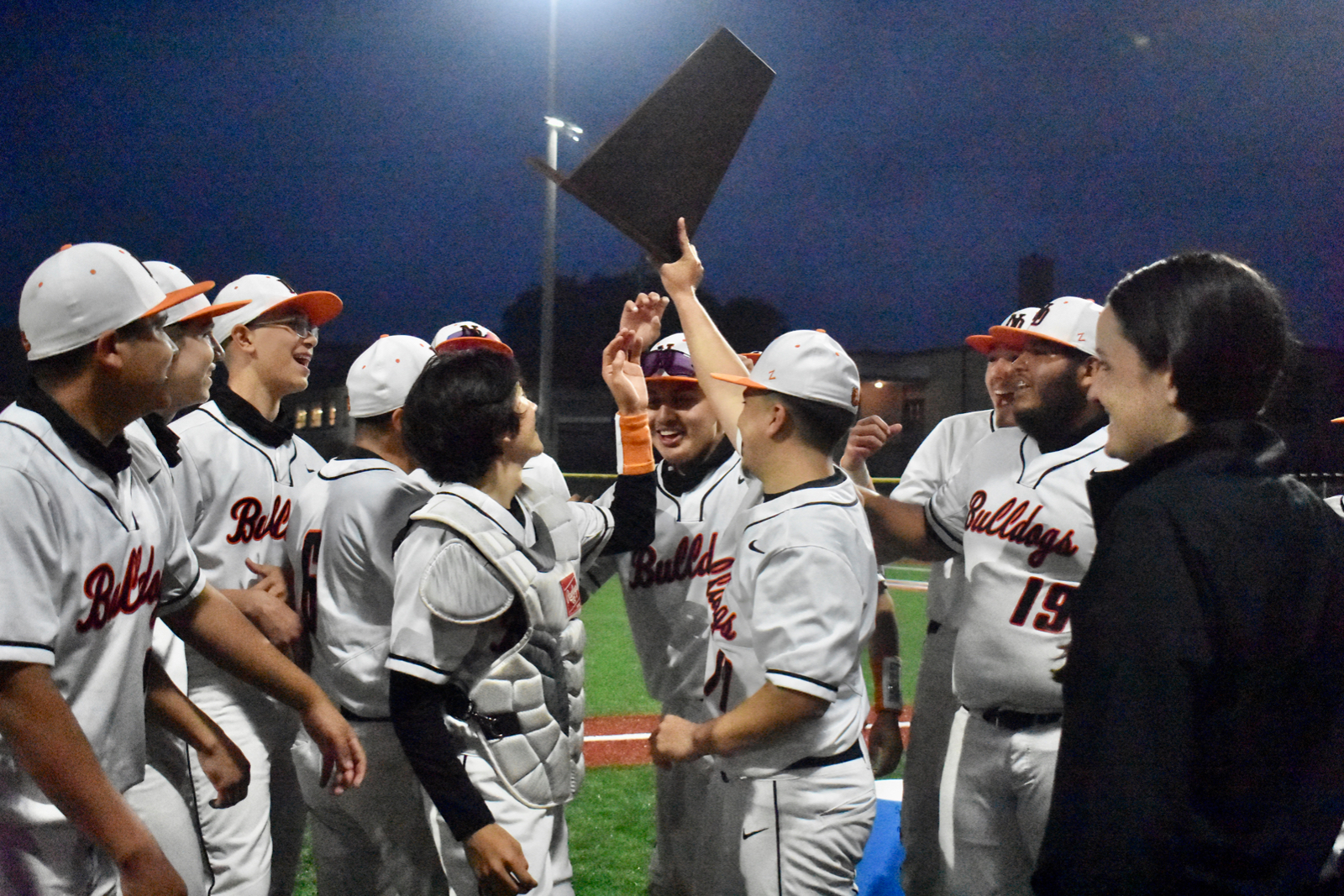 Senior Joseph Mendoza holds up the district title trophy for his teammates.

Sparked by Tony Cazares’ first inning grand slam and three pitchers combining for a perfect game no-hitter, North Dallas literally walked away with the District 12-4A championship Tuesday night in an 18-0 win over Wilmer-Hutchins at Higgins Field.

The Bulldogs finished the district season with a 9-1 record, and will head to the Class 4A bidistrict playoffs May 7-8. They will play the fourth-place team from District 11-4A in the bidistrict round.

“It never gets old. That’s the standard we have here at North Dallas,” North Dallas Coach Steven De La Cerda said. “As I’ve said before, we don’t hope to win, we expect to win. So long as I’m here, that’s our expectation.

“To deal with a young squad in a pandemic year with a lot of obstacles and construction at school, lots of question marks, to go out and compete and win another district title, it’s a testament to the boys working their butt off and pounding away. It wasn’t an easy year, this was probably one of the hardest ones, too. We found a way and we did it. I’m just proud of the boys.”

Senior Bryan Martinez struck out all three batters he faced in the first inning. Silvestre Torres faced three batters in second inning and first two batters in the third inning before senior Joseph Mendoza came in to get the final out of the game.

“It feels really good. Being able to play here at North Dallas for the past four years has been really good,” Joseph said. “Setting the standard here at North Dallas to win another district championship. I hope and encourage all the boys to work hard the next couple of years because, like I said, it’s a good program. Coach D has very good standards to help you become a man.”

The Bulldogs loaded the bases for Tony’s grand slam on three walks. Tony had the green light to hit at anything, and he hit a drive over the left-field fence.

The Bulldogs recognized their three seniors before the game. They have only one junior, and the rest of the squad are sophomores and one freshman.

“Winning district was fun,” said sophomore catcher Logan Moreno. “I just thought it was great with all my teammates. The energy was good.” 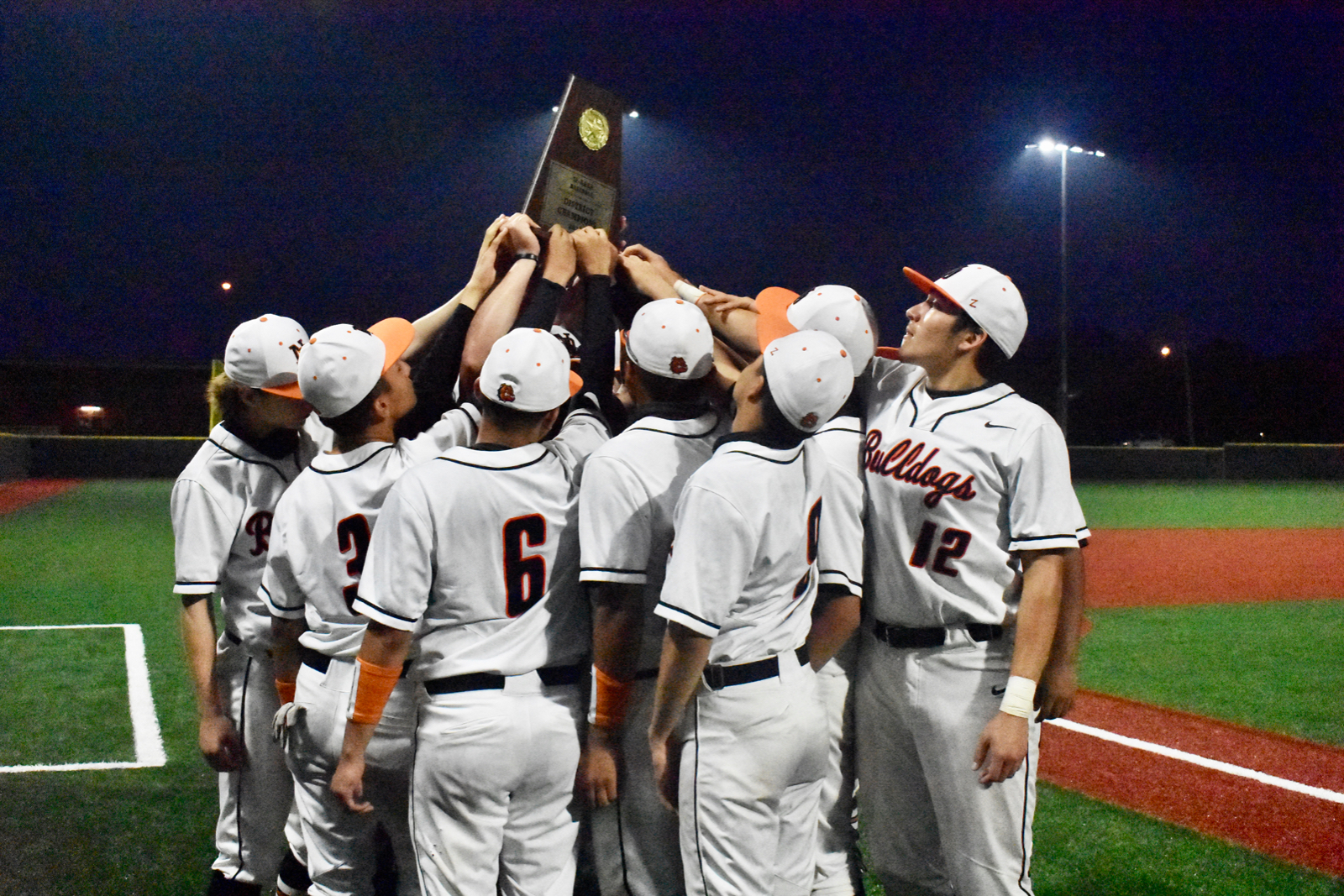 The Bulldogs players get a hand on their prize possession. 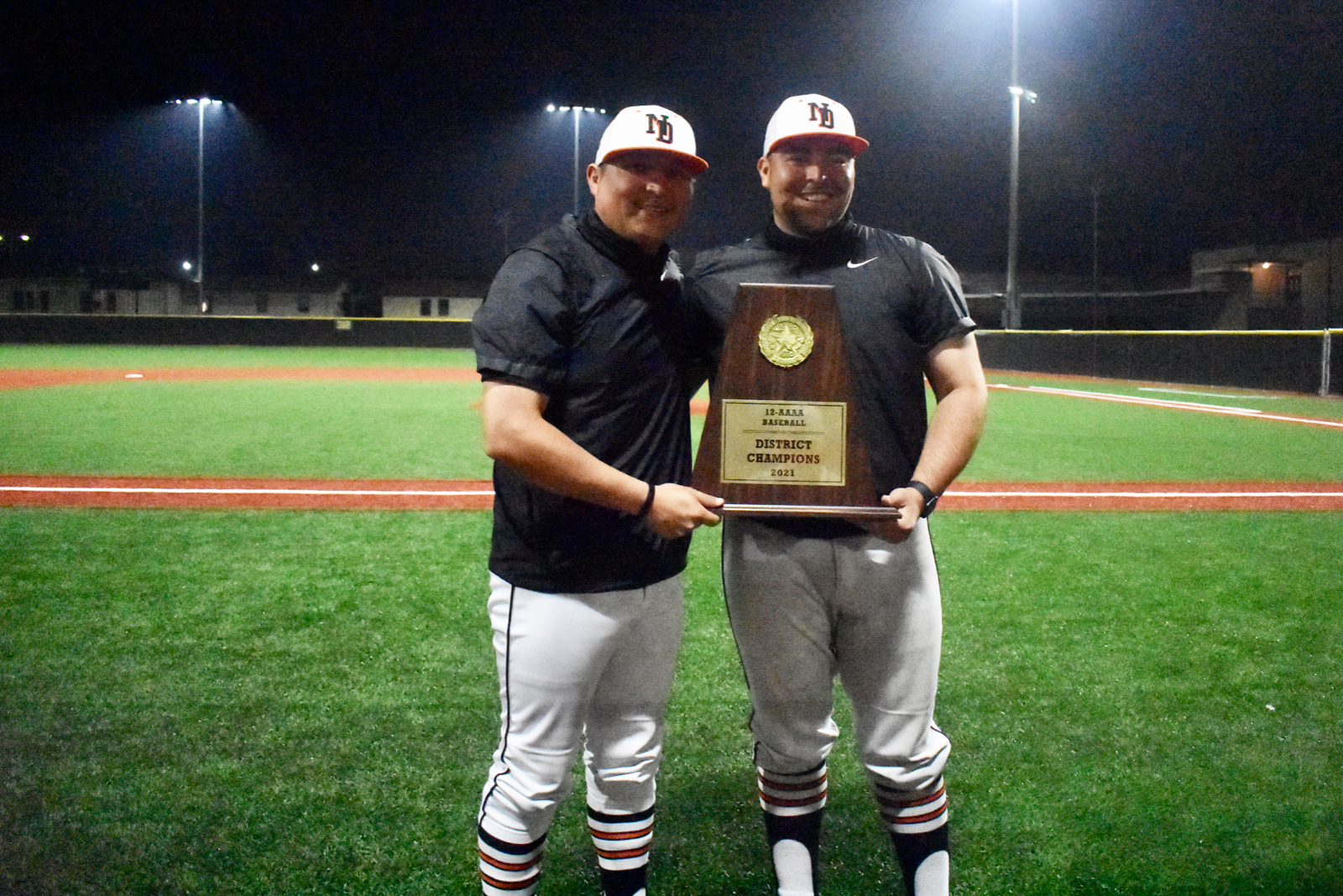 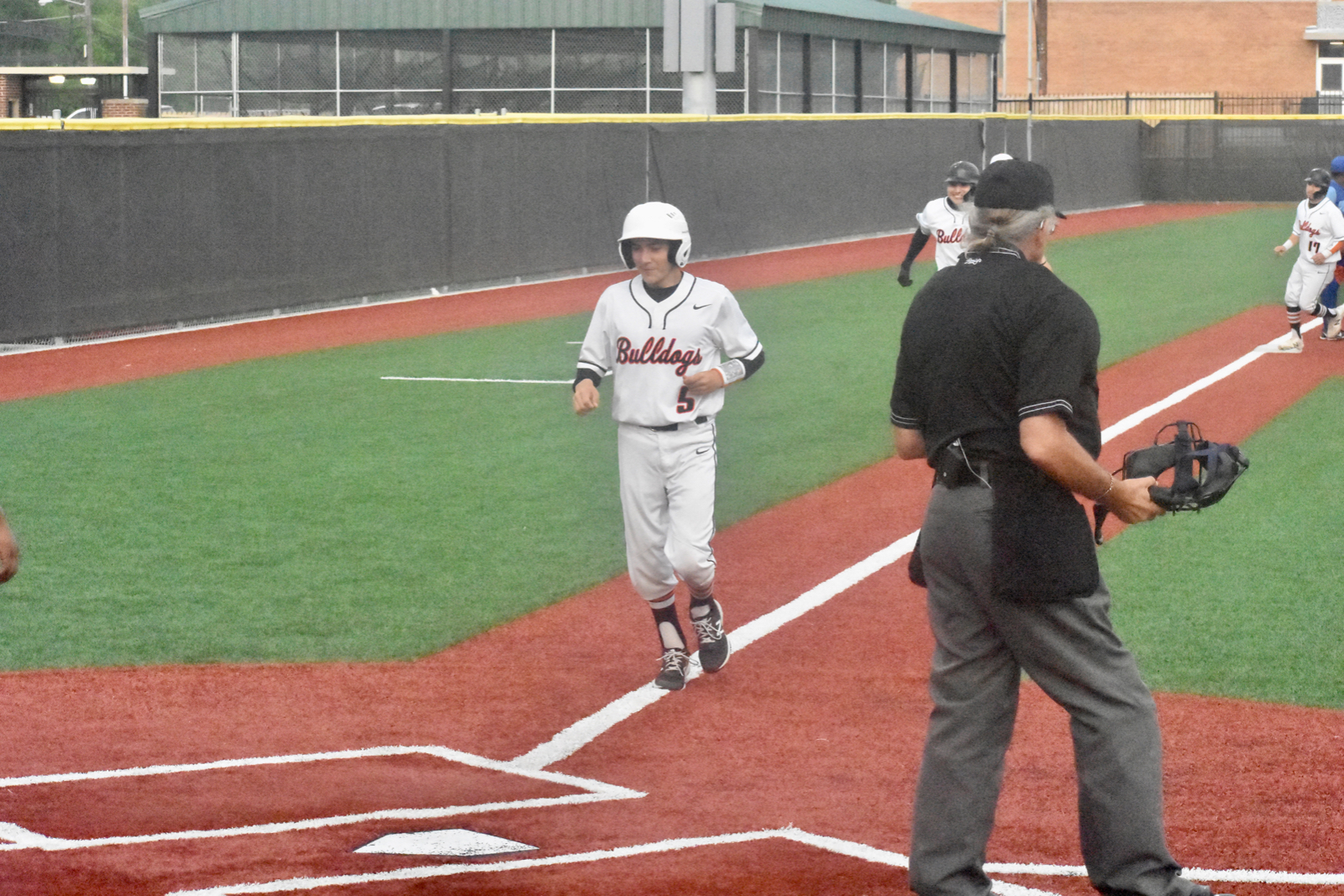 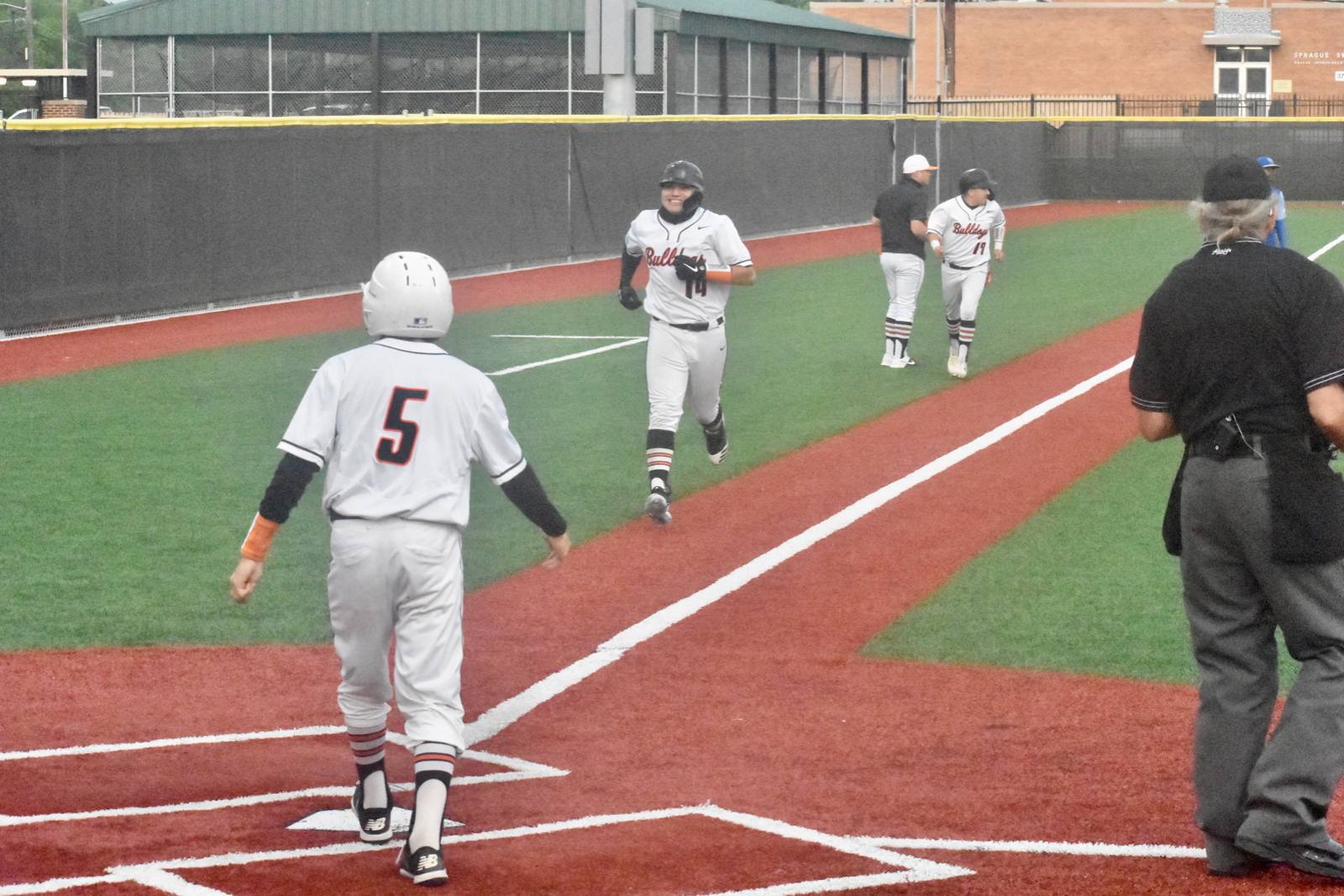 Logan waits as Jan Aguilar, who also walked, comes in to score. 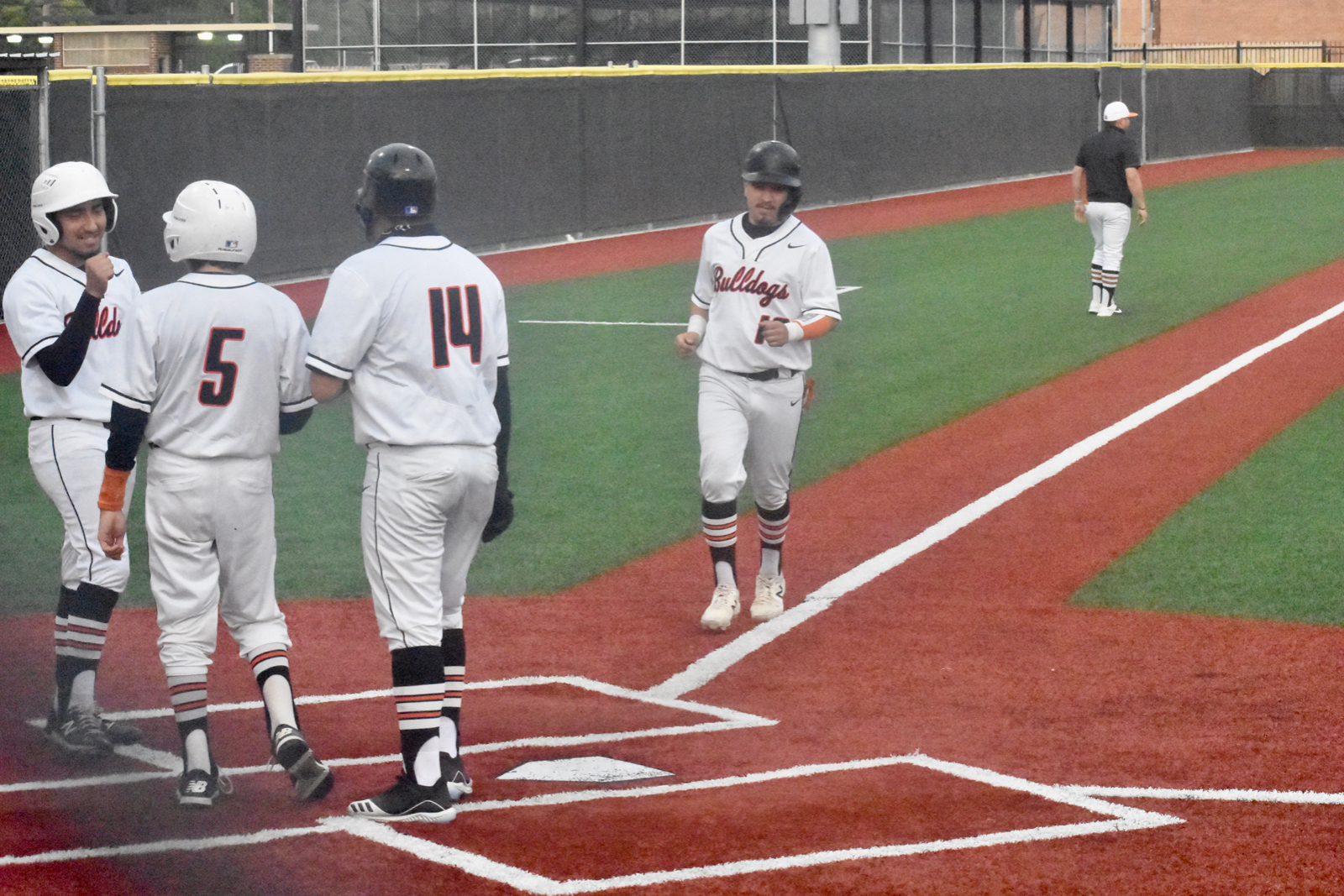 Then Joseph Mendoza, who also walked, follows and scores. 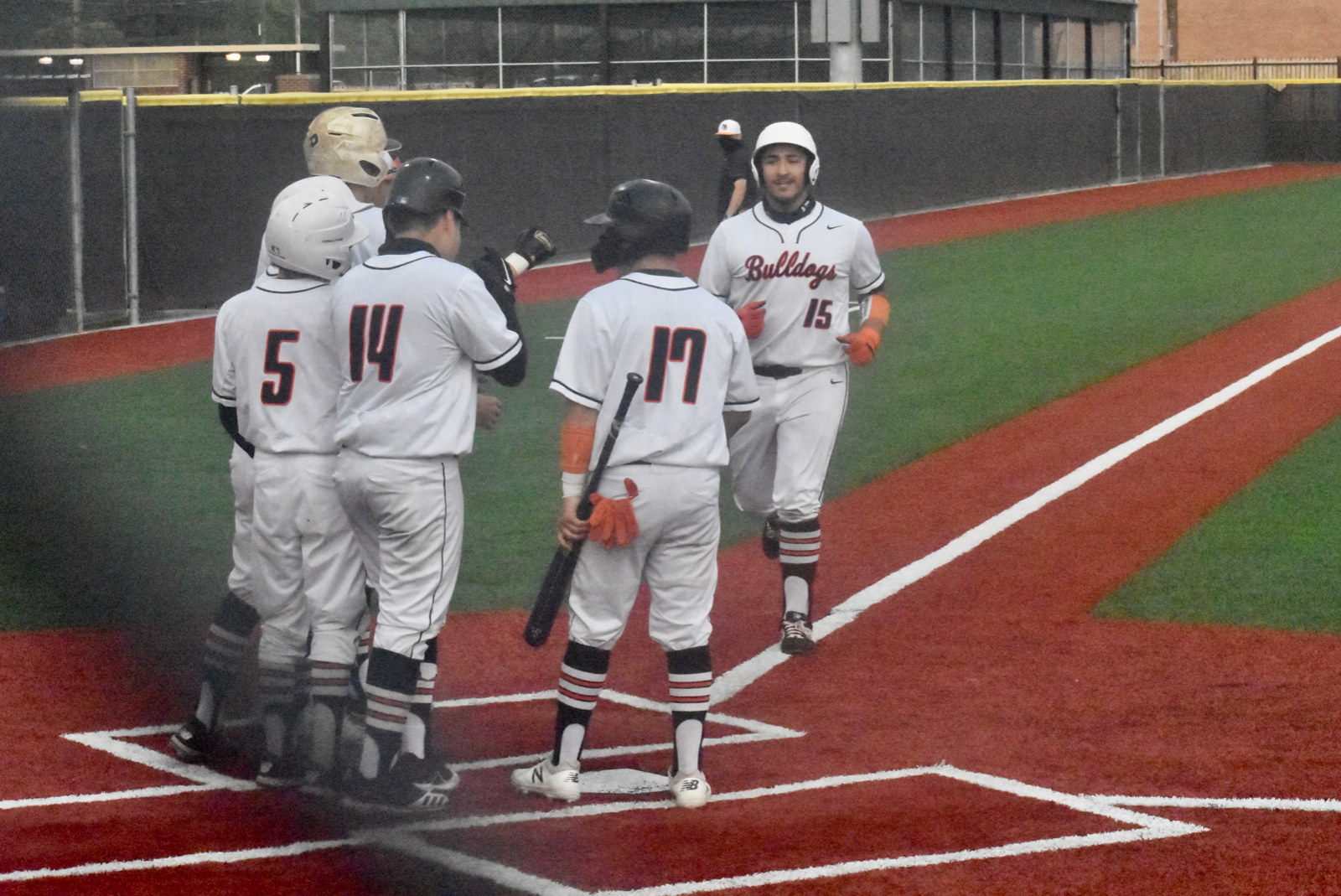 Then Tony Cazares arrives at the plate after hitting a grand slam in the first inning. 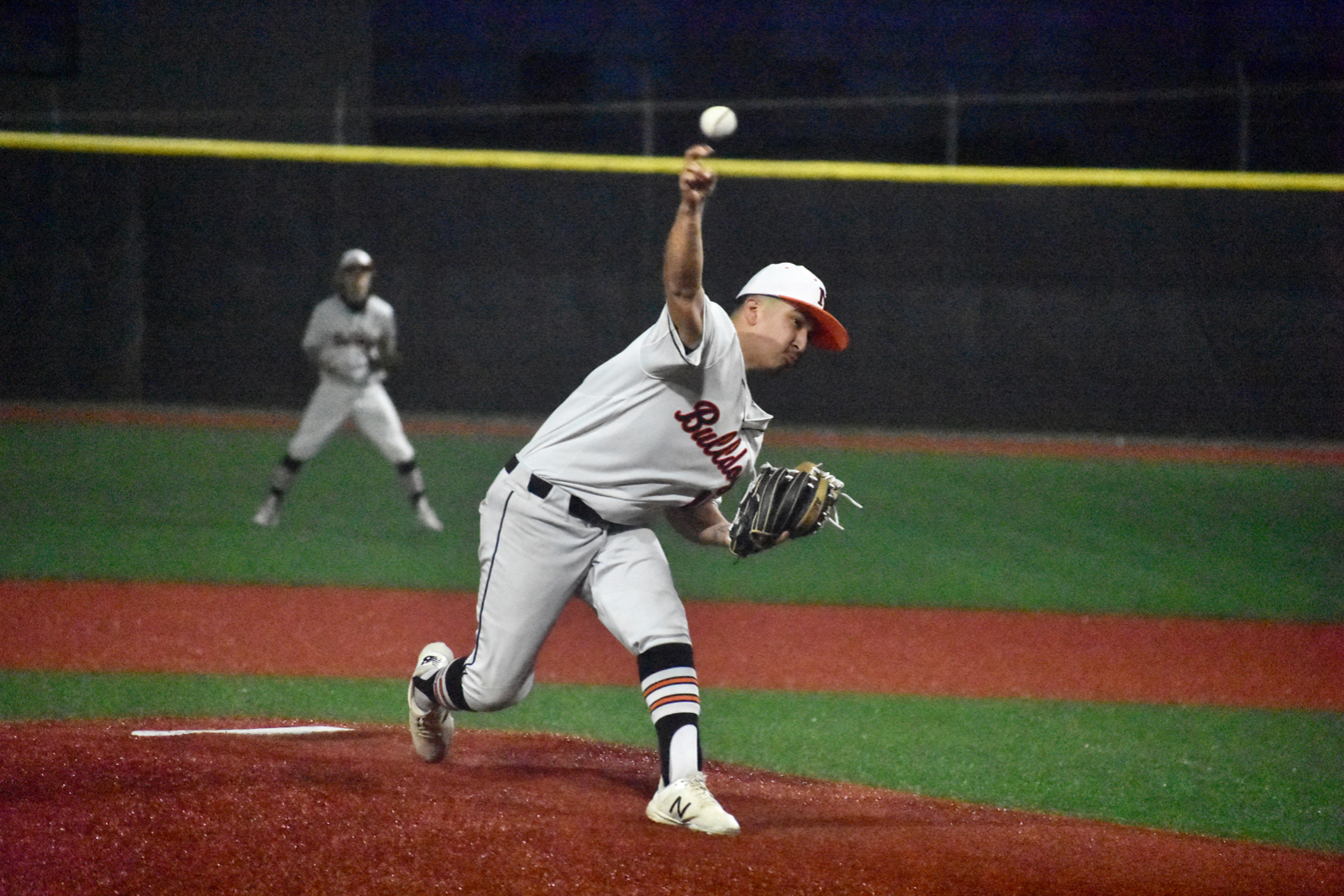 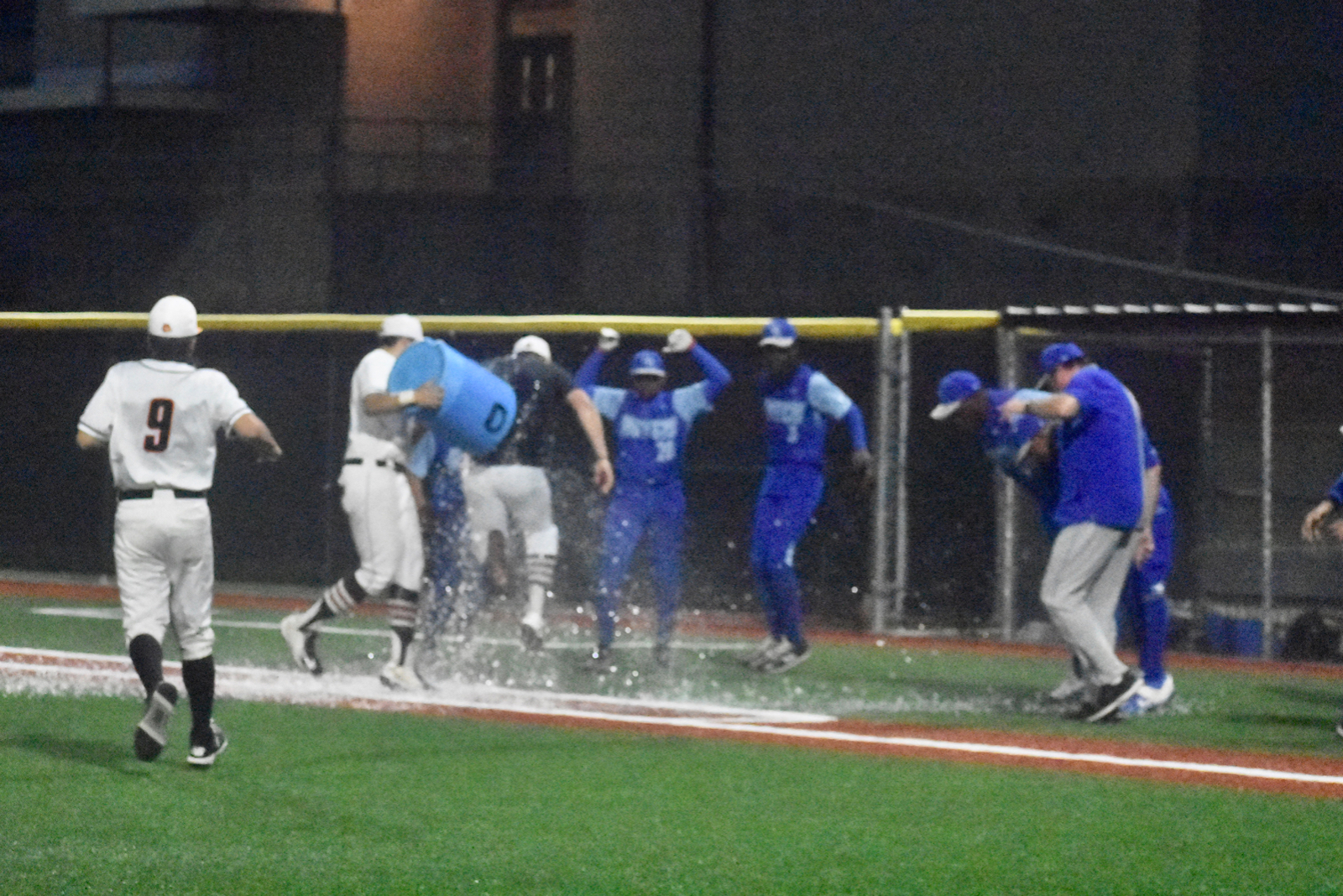 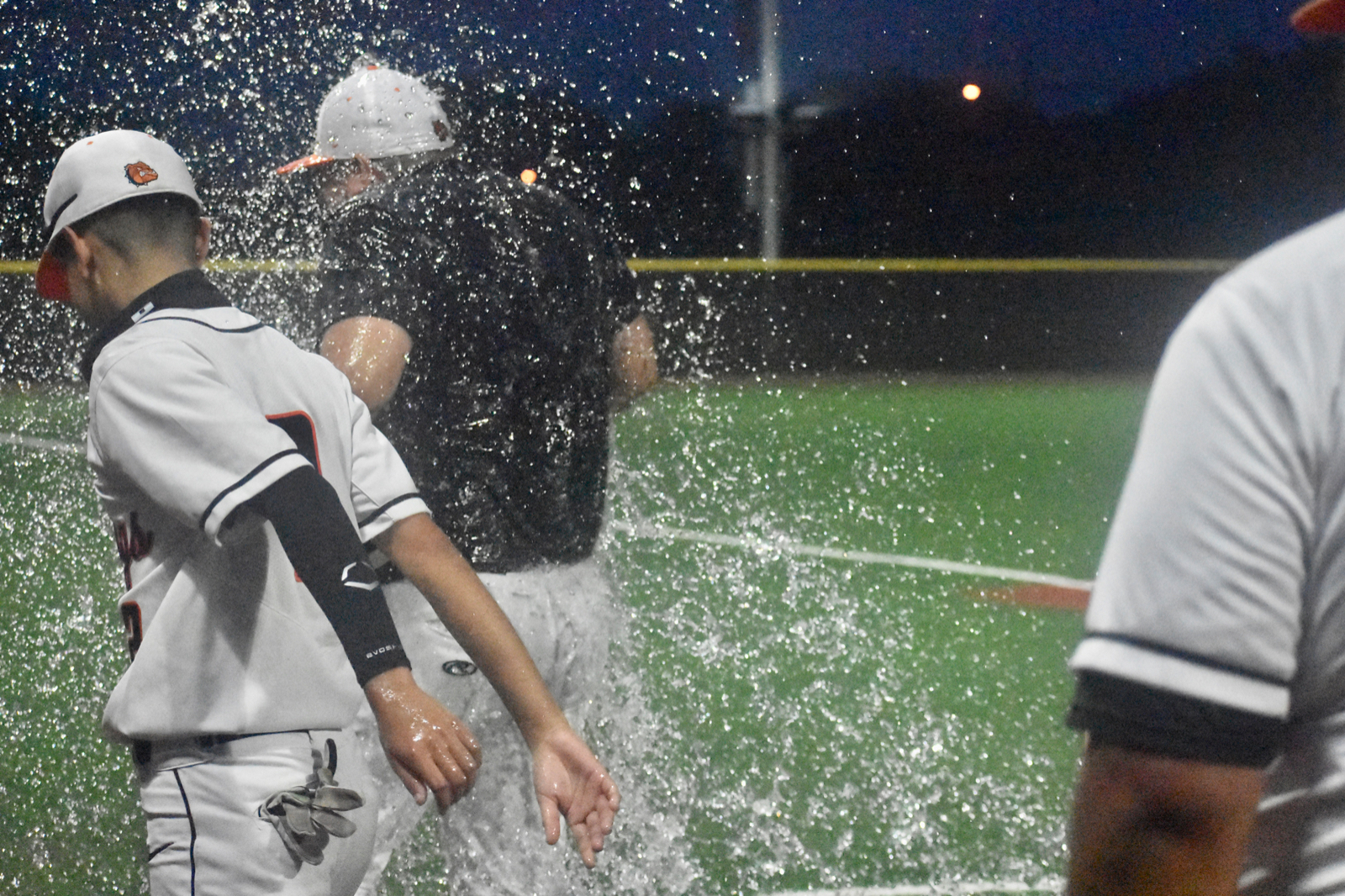 Assistant coach Elijah Perez is also doused with water after the win.