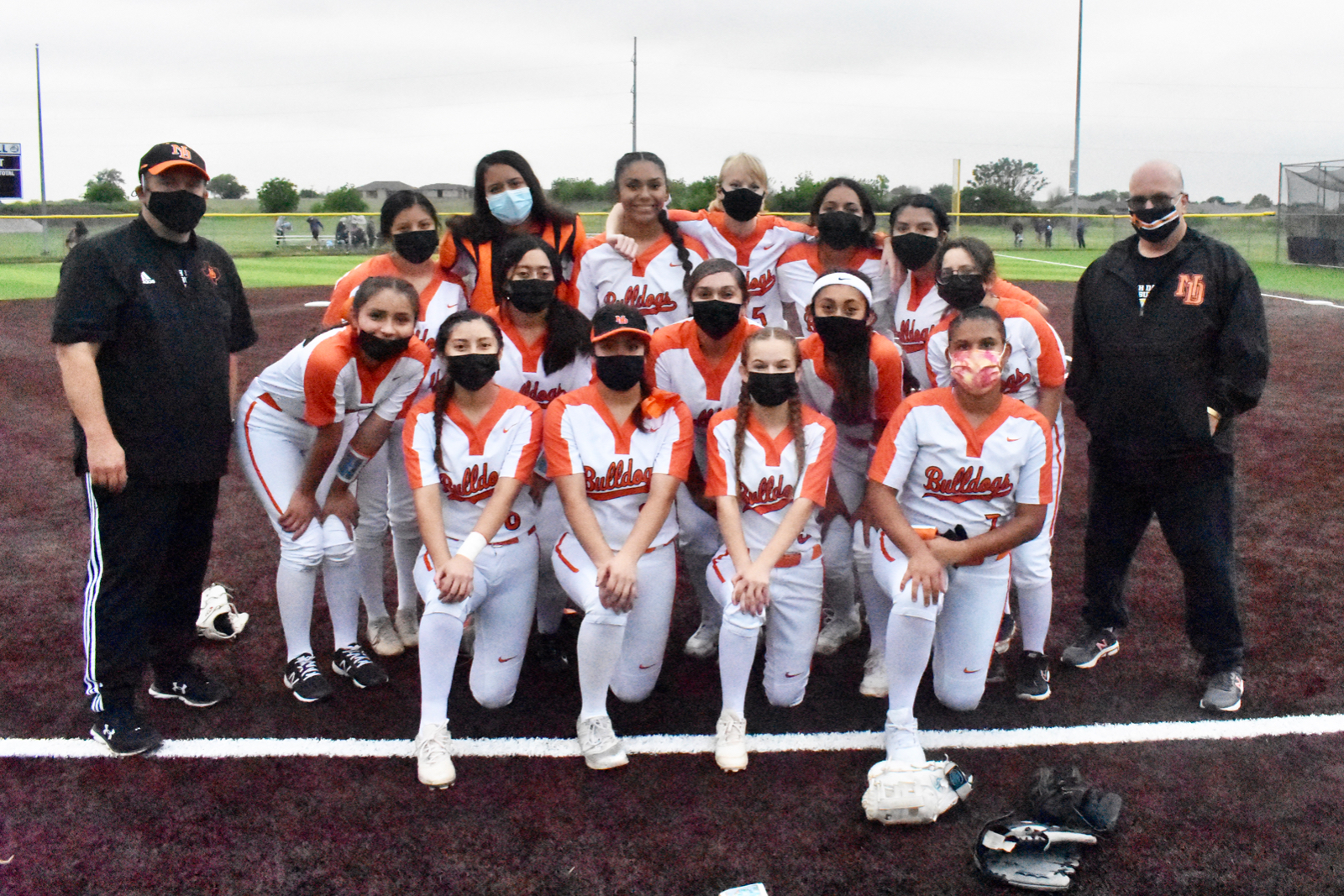 As luck would have it, Everman’s mascot is the Bulldogs, and the sign on the scoreboard read “Bulldogs Softball” — but luck wasn’t on the Lady Bulldog’s side this time.

Alvarado’s pitcher hit two home runs in the first two innings to help the Lady Indians take an 8-0 lead. North Dallas settled down and limited the Indians’ bats in the third and fourth innings.

But on the postive side …

“I think they did really well,” North Dallas Coach Chris Barnhill said after the game. “I was super impressed with how they played. Once they got in the groove, they started making the plays. They were making plays. The outfield was doing great. Julie’s pitching was awesome. The girls were hitting.

Coach Barnhill could point to all the defensive plays. Ava Gonzalez caught a line drive in left, Patrice Leavy had two catches in center field, Cindy Chacon had two catches in right field. Freshman Chloe Garcia tagged out two sliding players at third base, and later she knocked down a hard hit at third base. Pitcher Julianna Serrano caught a pop-up while in the pitching circle, and second baseman Lauren Garcia caught a pop-up that was even higher. Sophia Hernandez caught two line drives at shortstop, and she barely missed stopping the ball on a grounder up the middle.

The Lady Bulldogs scored in the fifth when Sophia got a hit down the third-base line. She was forced out at second on Julianna’s ground ball. Flavia Santamaria ran for Julianna and stole second base. Flavia then moved to third base on Chloe’s single, but she looked like she was going to be out at third base. But somehow Flavia managed to knock the ball out of the third baseman’s glove and was safe. Flavia then scored on a wild pitch. Chloe scored on Lauren’s ground out.

“I’m pretty proud of how the season went. I wish we had went undefeated [in district play], but things happen,” Coach Barnhill said. “We’re going to miss the four seniors who are graduating but we’ll find girls to fill their spots, like always. We’ll have the young ones and girls coming in.”

The Lady Bulldogs finished with a 13-6-1 record. They were co-champions of District 12-4A with a 9-1, and this was their second playoff trip in the past three years. 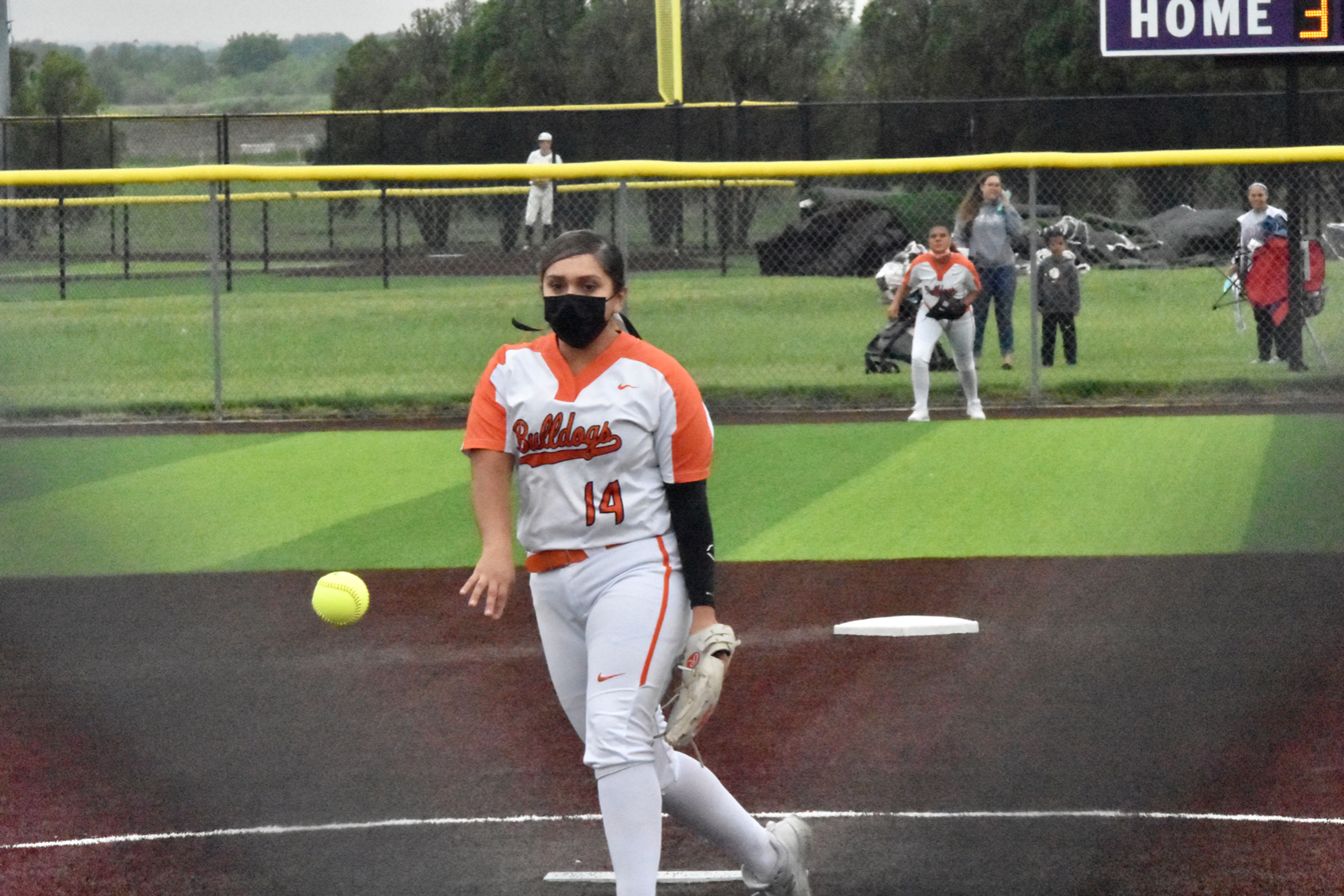 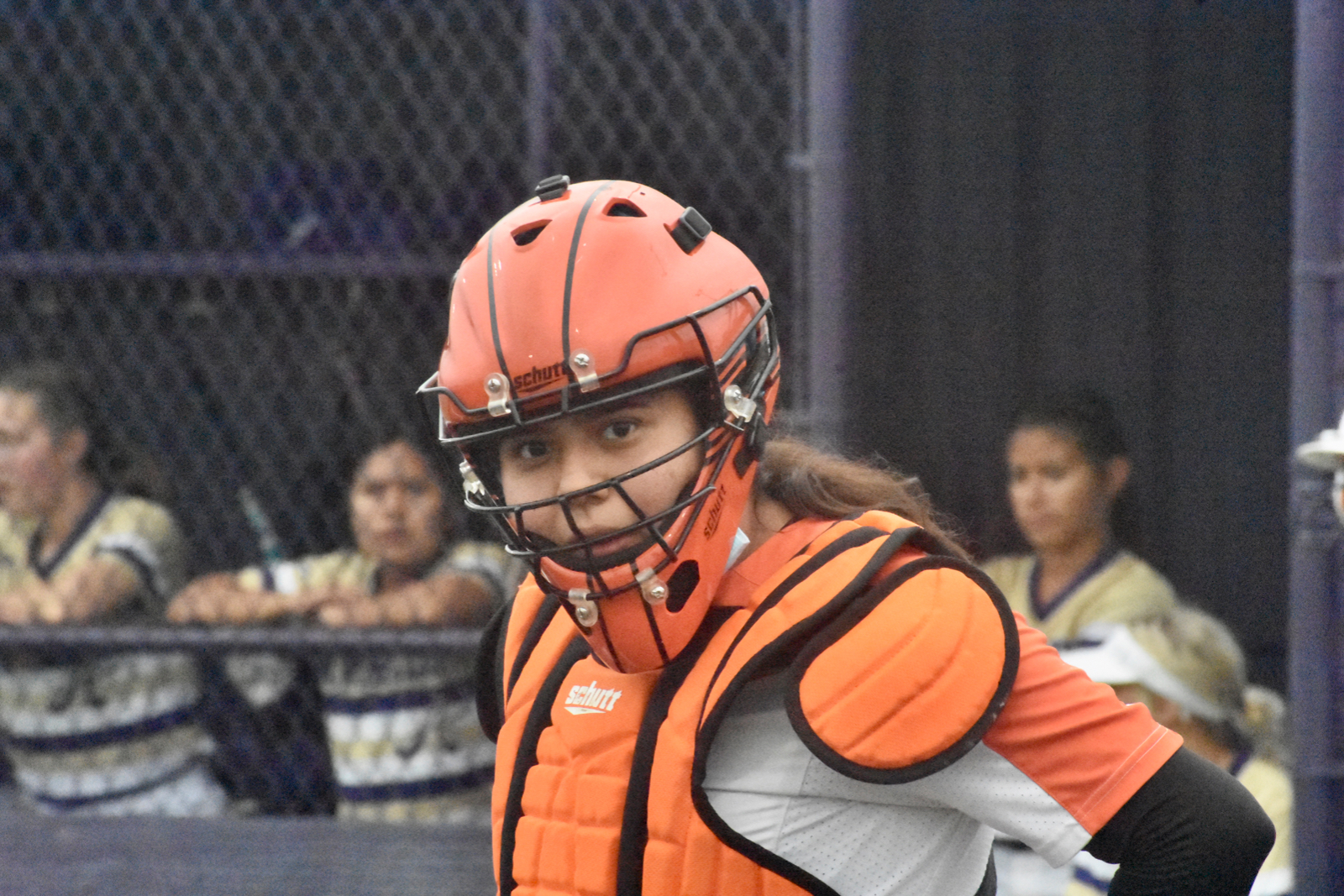 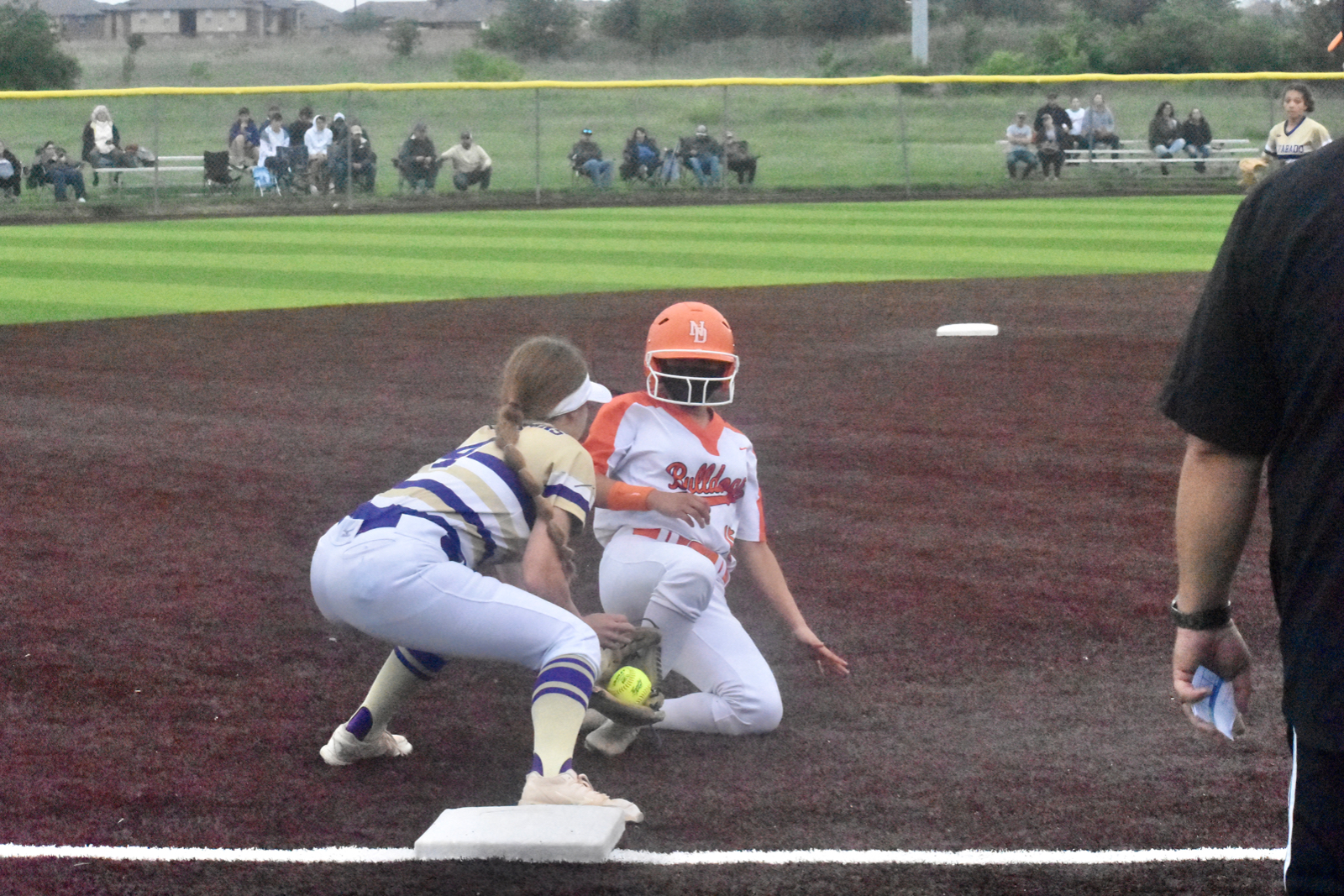 The Alvarado third baseman has the ball as Flavia Santamaria slides in the fifth inning. 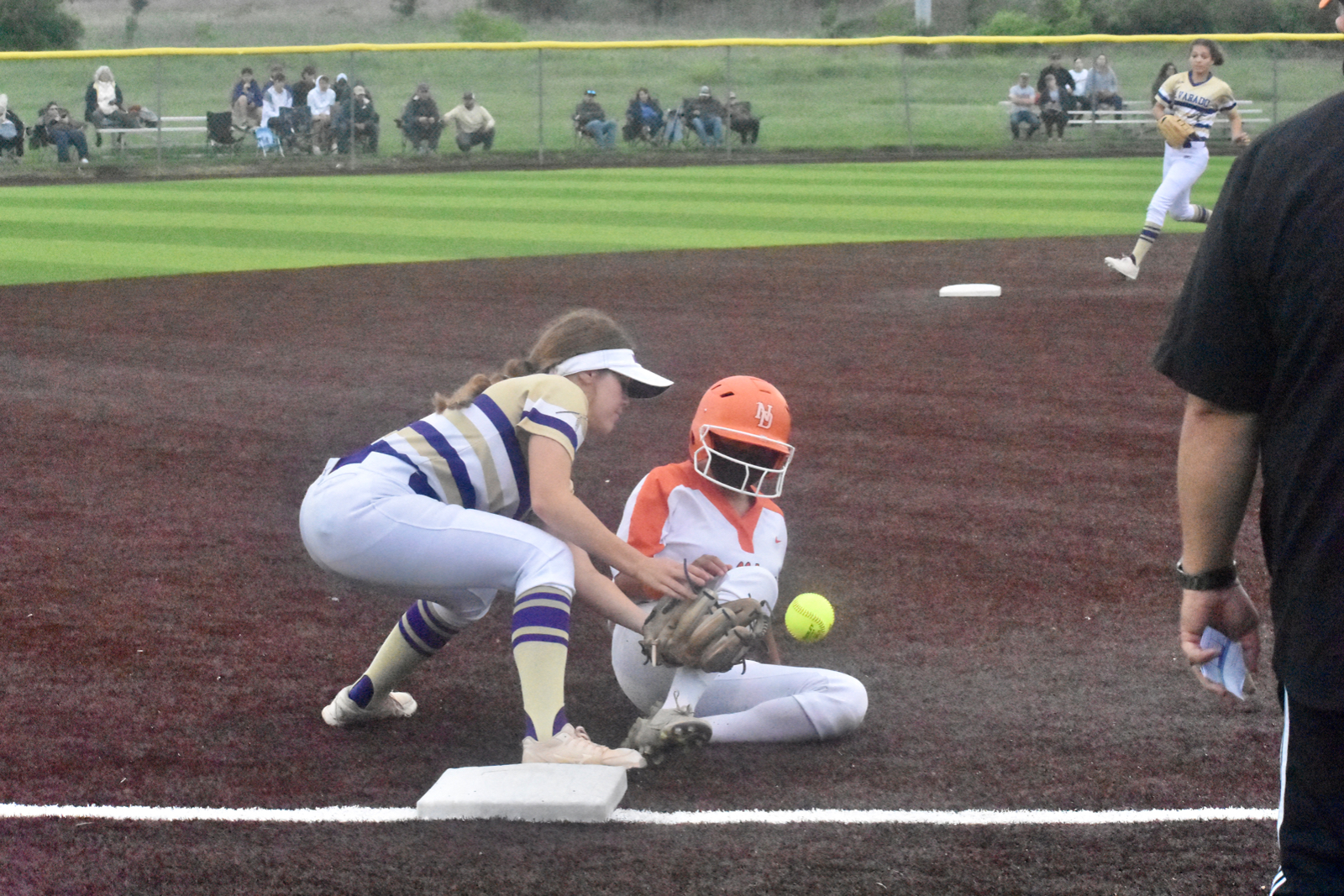 But Flavia hits the glove and the ball pops out. 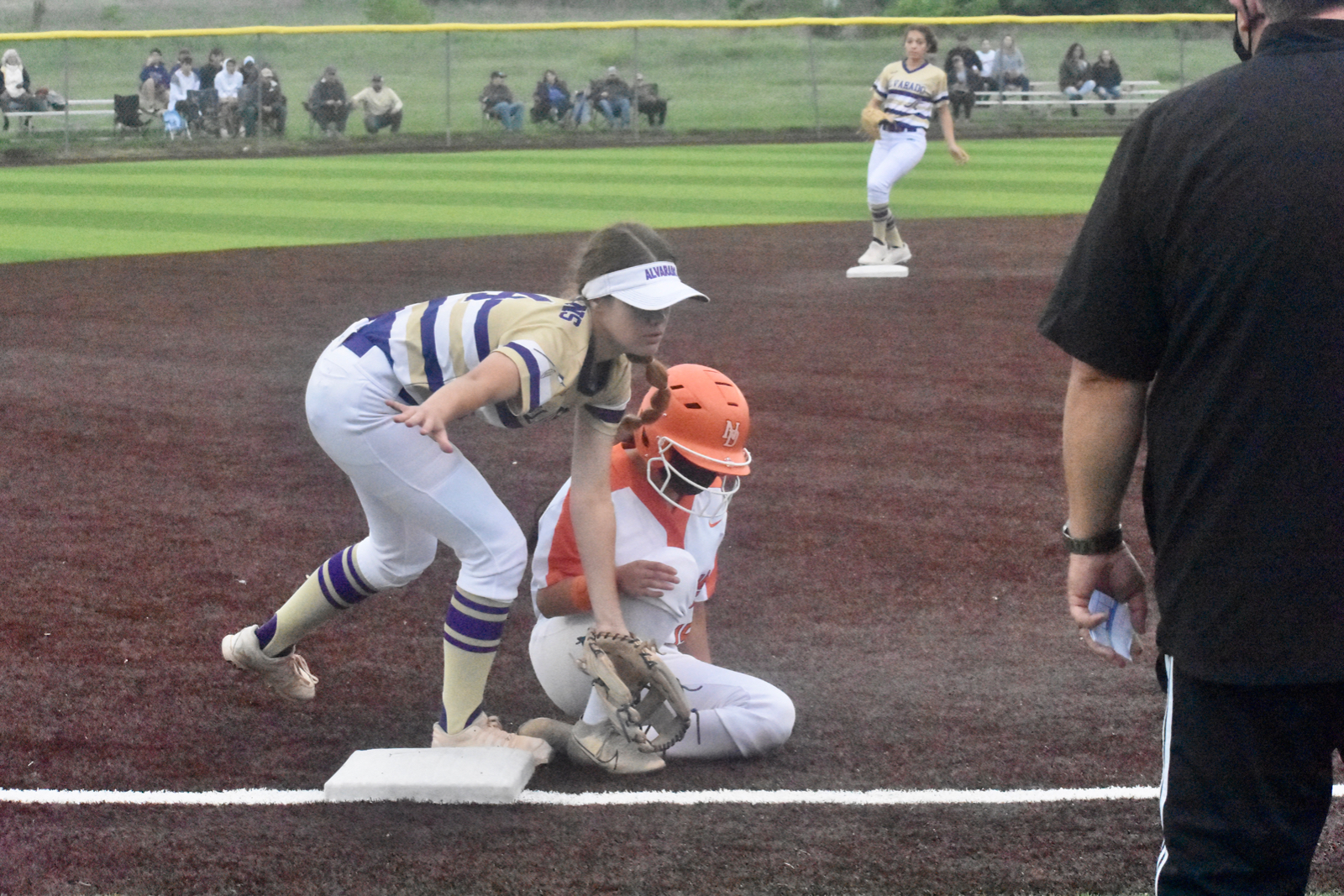 Flavia is called safe at third base. 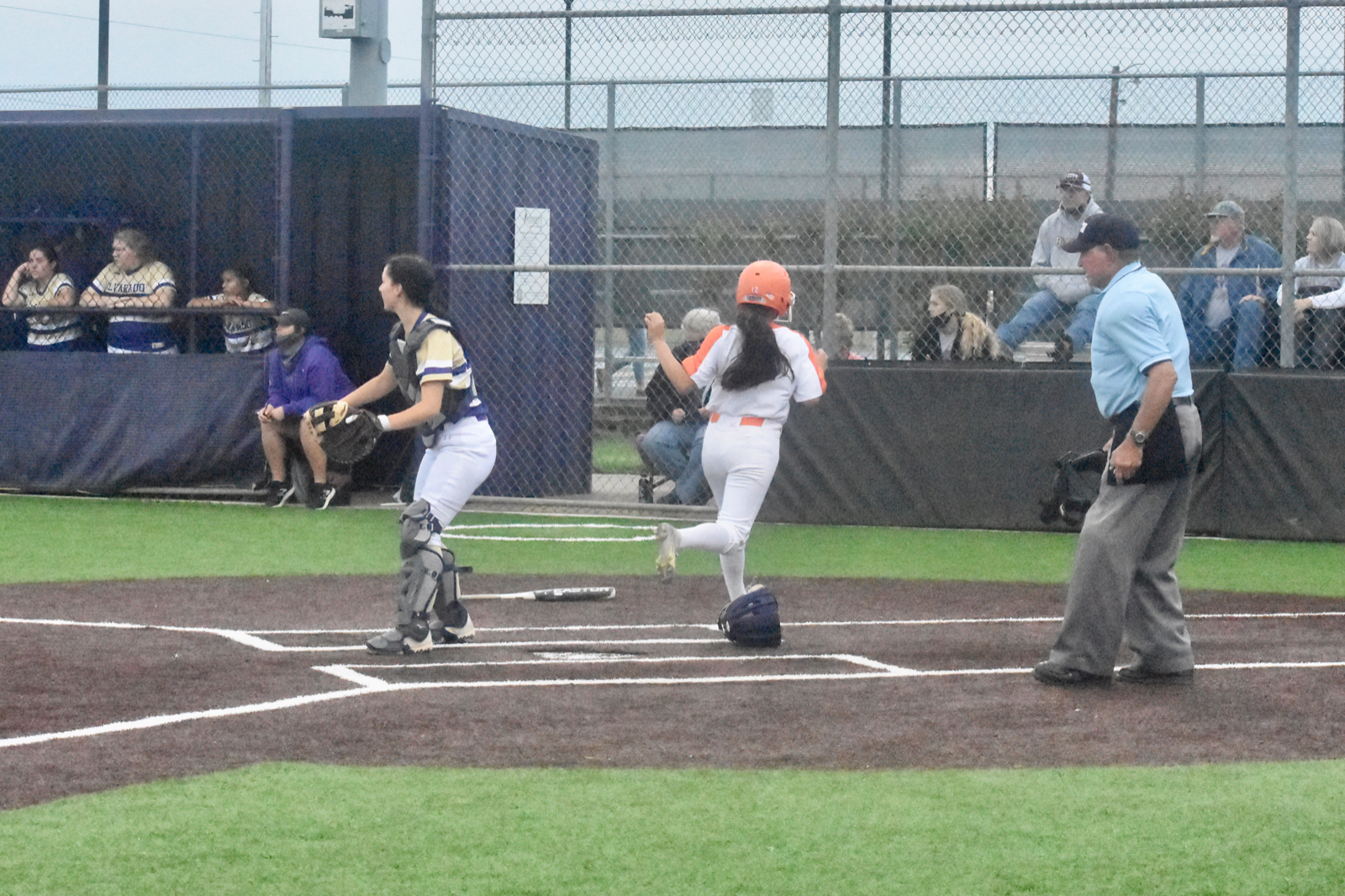 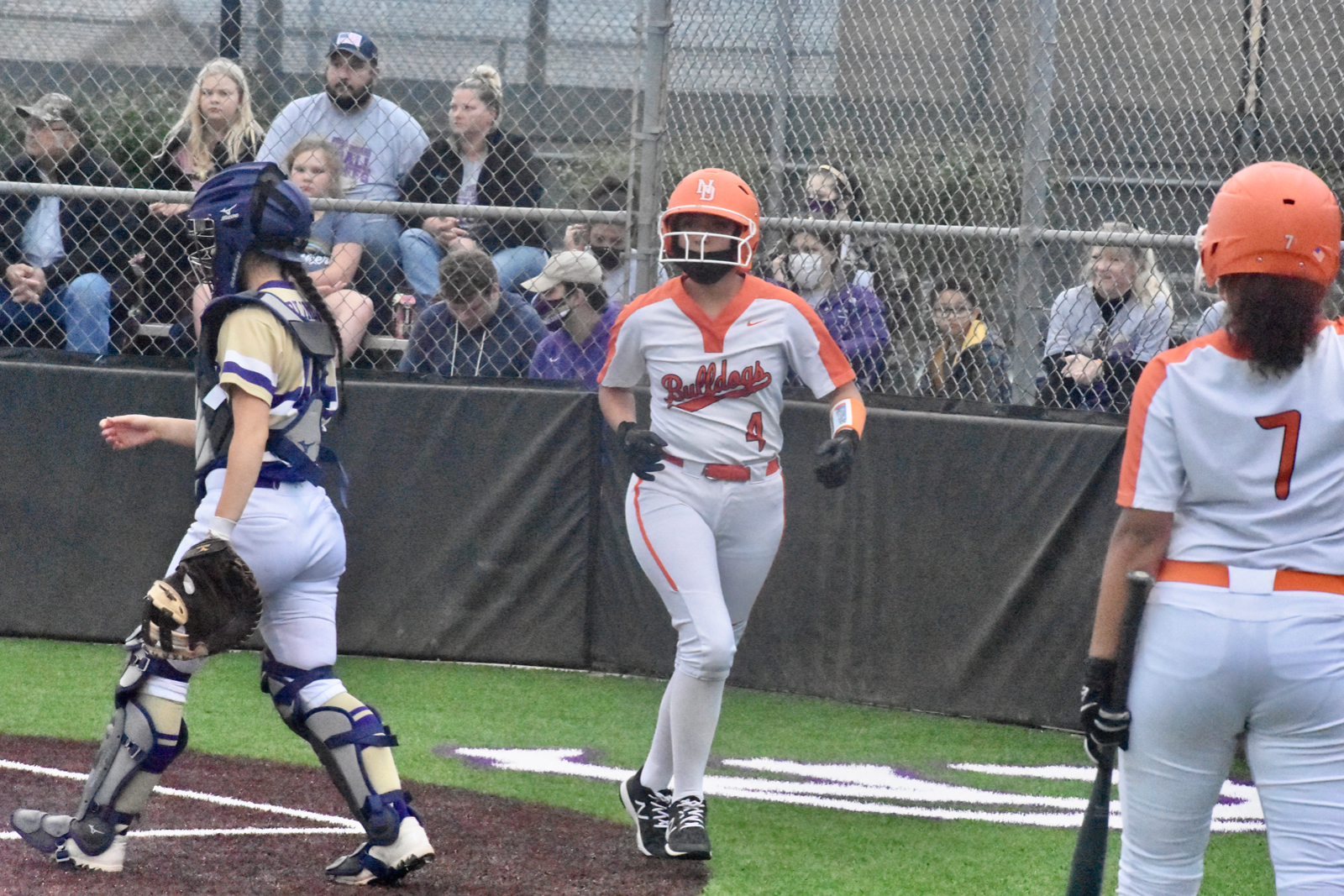 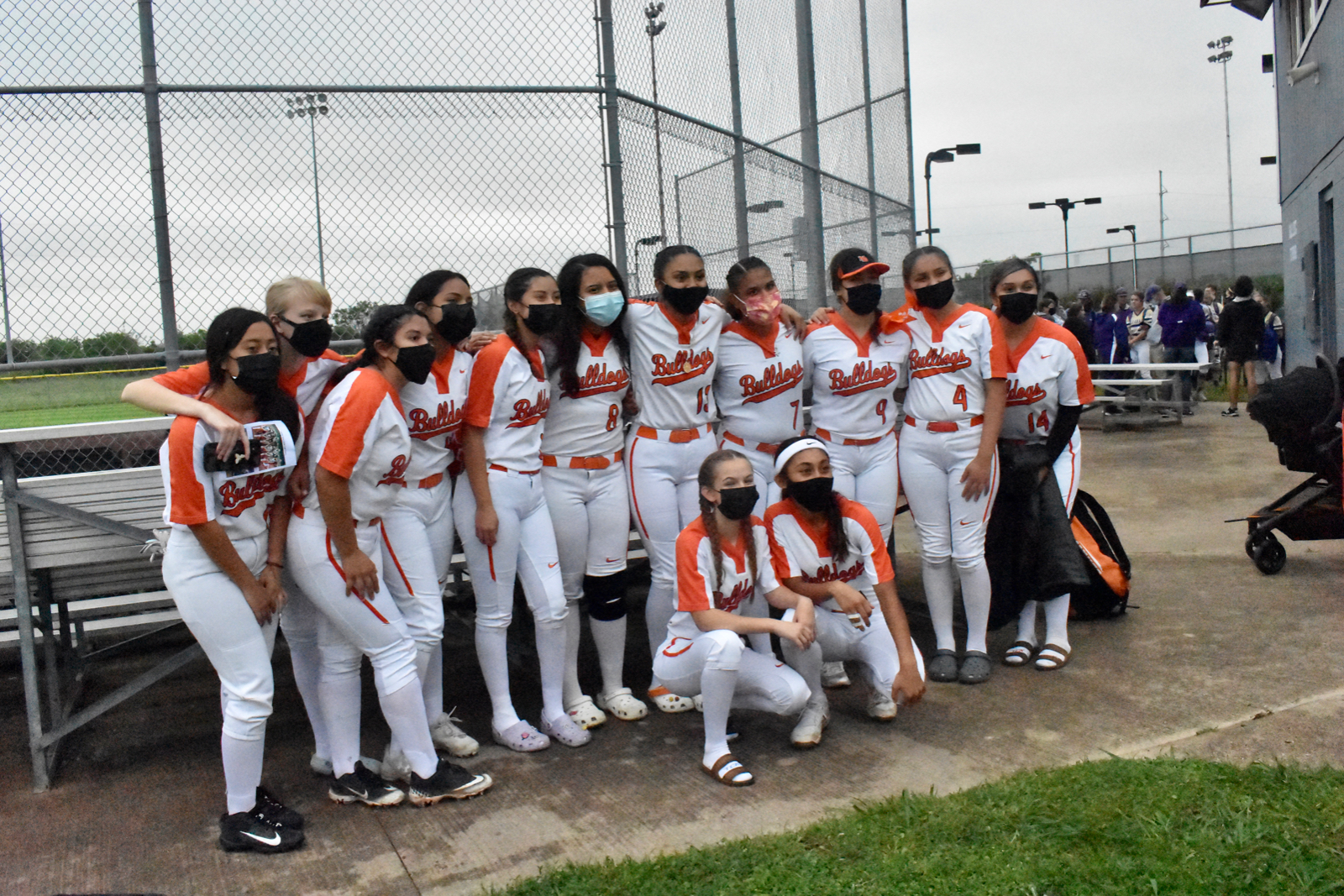 The Lady Bulldogs gather for a team photo for the fans. 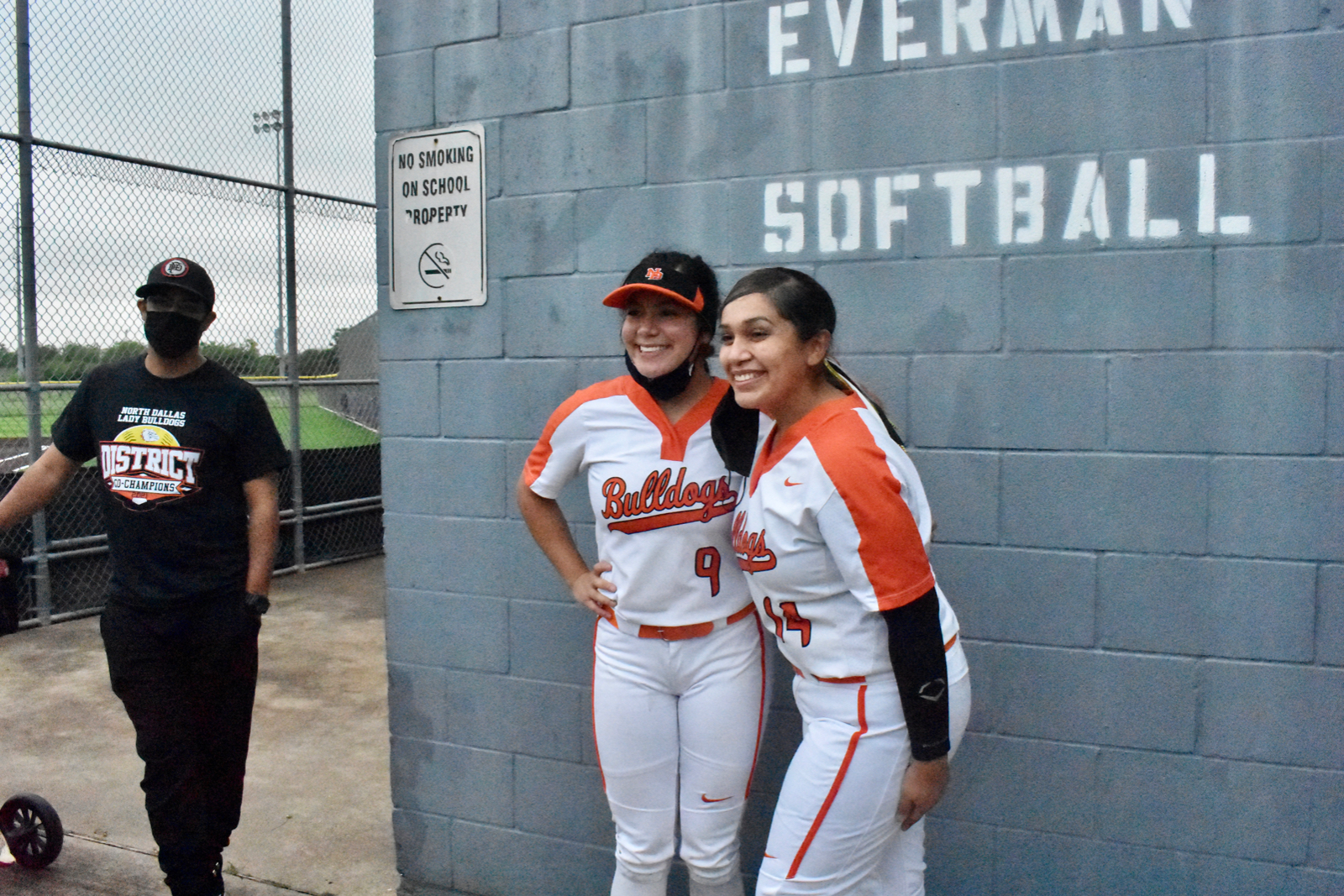 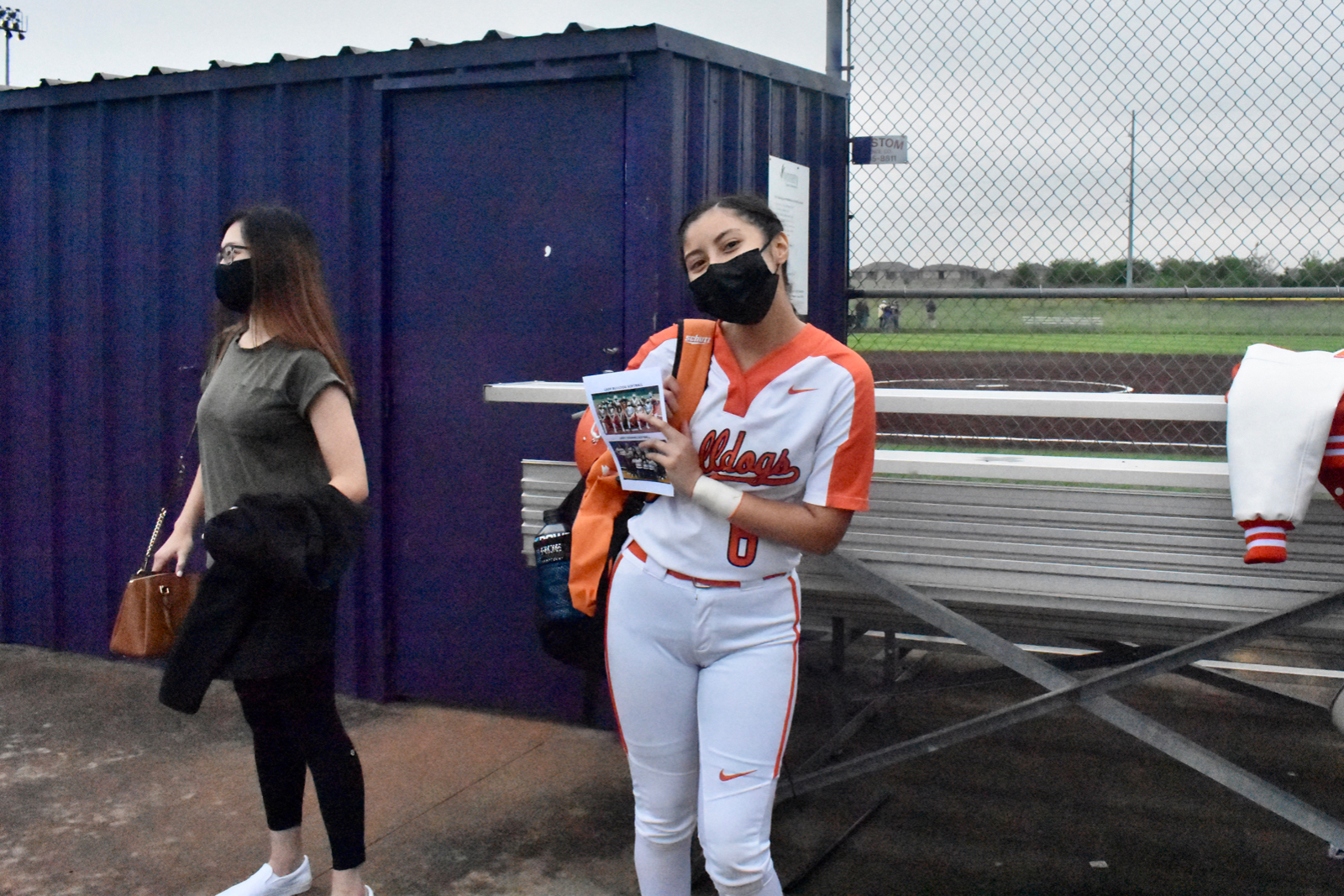 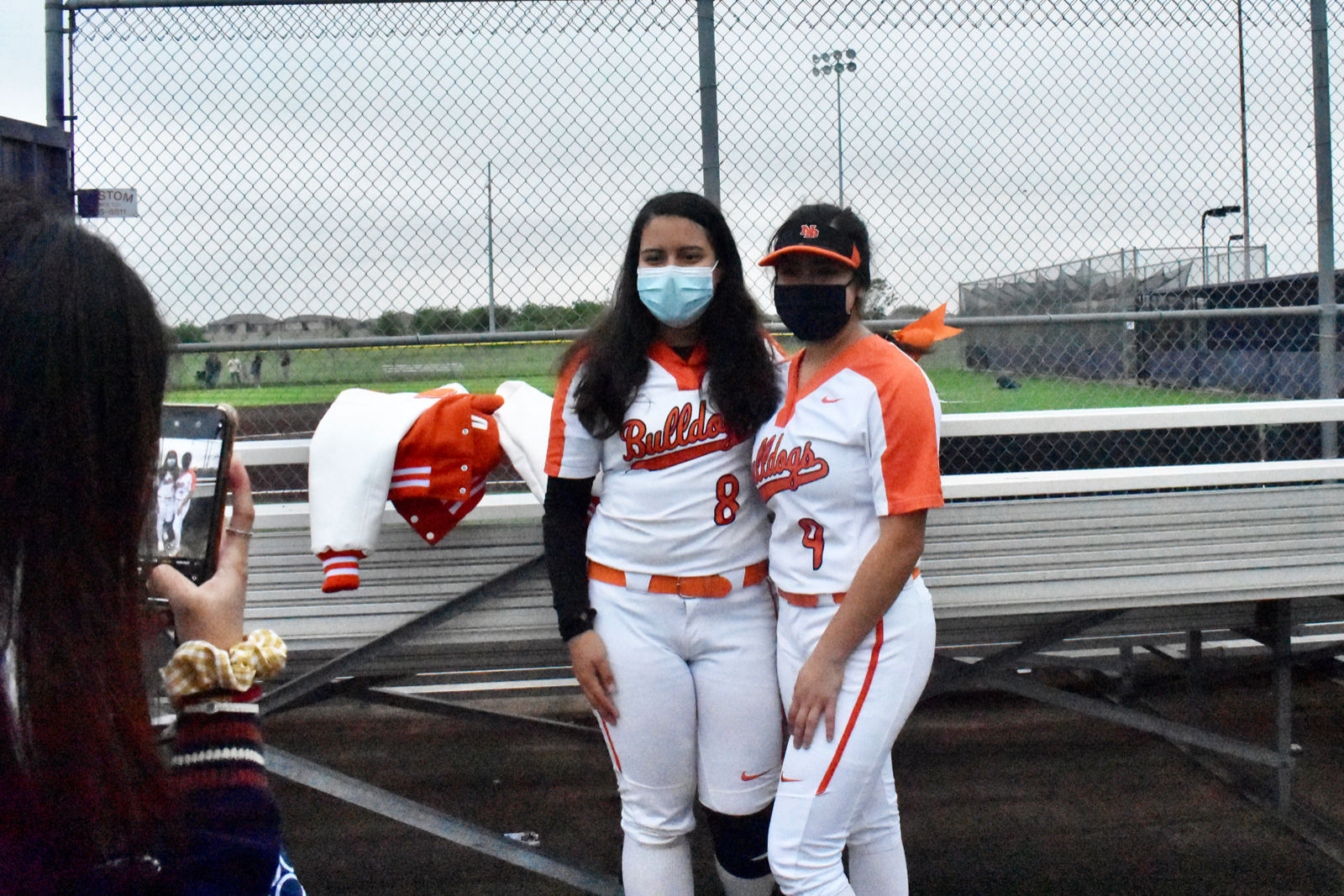 Rubi Velasquez and Sophia Hernandez have their photo taken by Tina Nguyen. 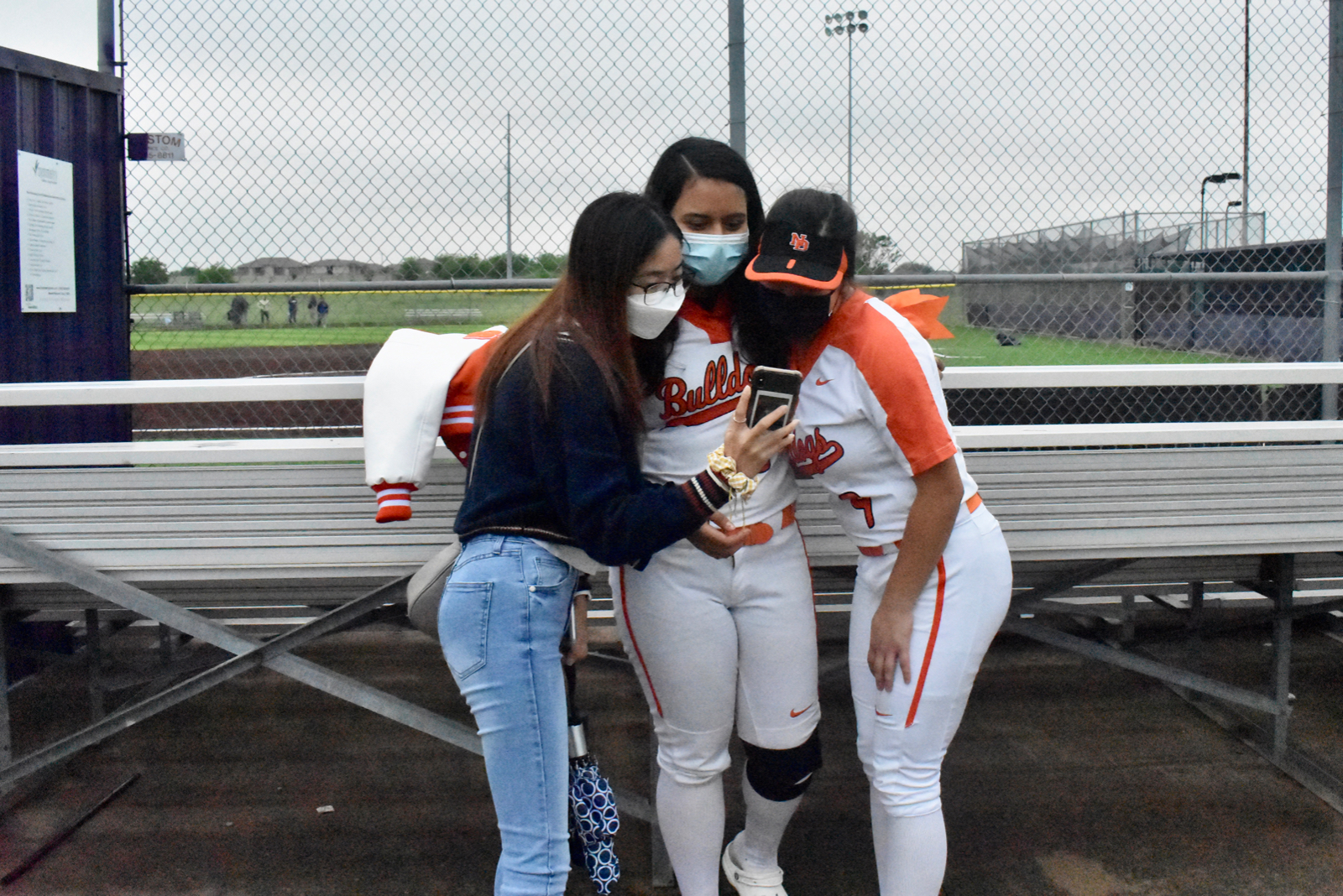 Then Tina shows the photo to Rubi and Sophia.