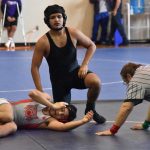 Nicolas Andrade pins a Wilmer-Hutchins wrestler in his first match Saturday.   Nicolas Andrade talks with Coach Desireé Allen after his win.   North Dallas went to the UIL District 7-5A meet with three wrestlers on Friday and Saturday at Conrad  High School. They came home with two wrestlers advancing to next week’s regional meet 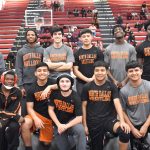 Damien Lopez wins his match against Woodrow in an earlier match this season.   Nicolas Andrade will be competing in 120-pound weight class at district.   North Dallas wrestling coach Desiree Allen has been working on her lineup for the District 7-5A meet on Friday and Saturday at Conrad High School. She can only enter 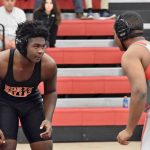 Cedric Burkley tries to push over his Woodrow opponent during an earlier match this month.   Cedric manages to grab his opponent’s arm.   Cedric pushes his opponent on his back, and gets close to pinning his opponent. North Dallas junior Cedric Burkley is one of several football players who are competing in wrestling to